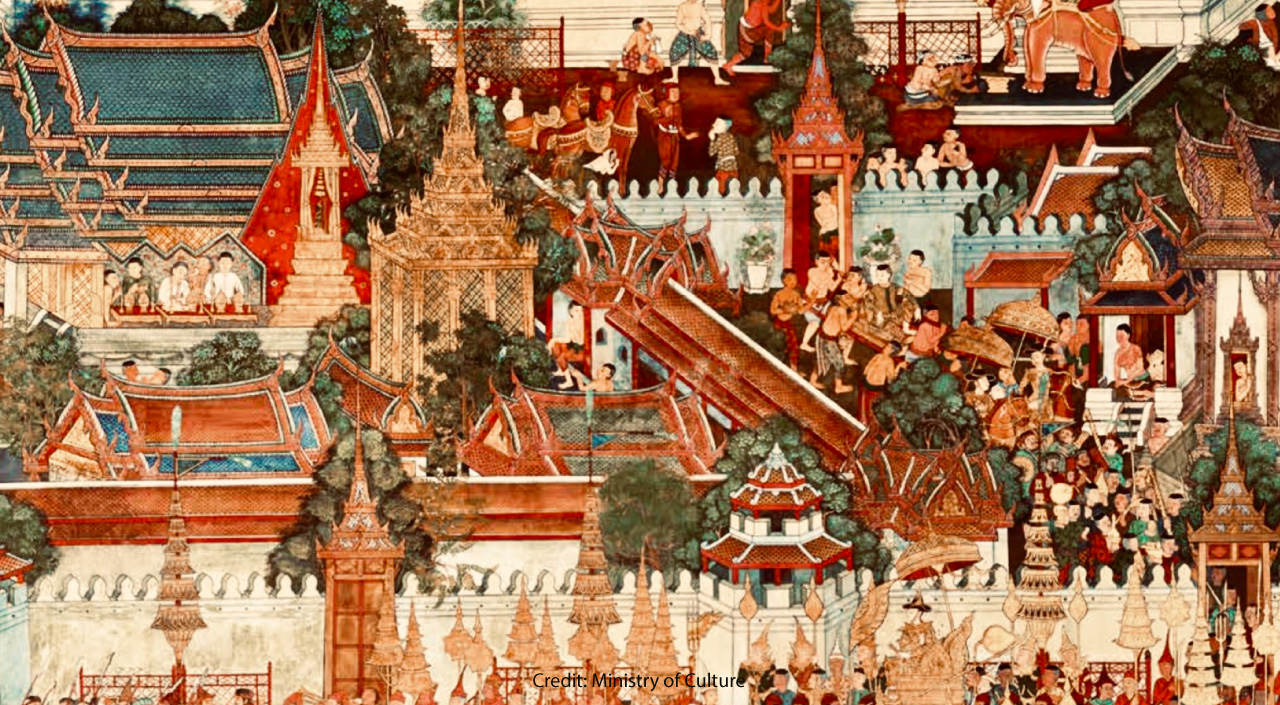 The Royal Coronation Ceremony is an ancient rite marking a Thai king’s ascension. During the proceedings, the chief Brahmin – Phra Maha Ratcha Khru – presents the king with the Phra Suphannabat, a golden plaque inscribed with the official title of the newly crowned king, and the royal regalia. The regalia are items that signify the monarchy and represent the different roles the king plays in the country. 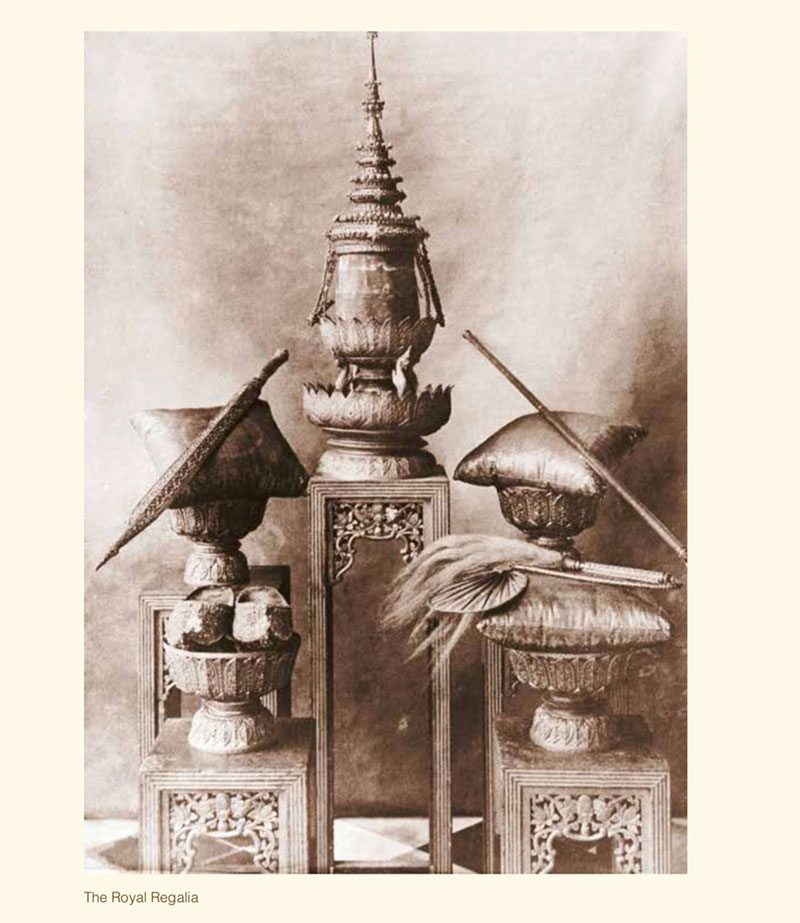 The five principle items of the royal regalia are:

The Nine-Tiered Umbrella of State
Much like the crown jewels in the West, the Nine-Tiered Umbrella of State, or the “Nophapadon Maha Saweta Chatra”, is one of the most important items in the royal regalia. Previously, these umbrellas only had six tiers representing the six levels of heaven, but now the tiers have been increased to nine to represent the king’s responsibility in looking after his people in all nine directions – the North, South, West, East, Northwest, Northeast, Southwest, Southeast and the heavens, as a Thai king is believed to be an avatar of the Hindu god Indra – the ruler of the heavens.

Each tier of the umbrella is made of three layers of white cloth trimmed with gold, and the umbrella is topped with a finial. Since the umbrella symbolizes the king’s exalted status and his supremacy in the country, the umbrella used to go wherever the king went. Now, however, these umbrellas are only displayed in the throne halls and palaces.

The Great Crown of Victory
The Great Crown of Victory or the “Phra Maha Phichai Mongkut” is 66 centimeters high and weighs 7.3 kilograms. Originally ordered by King Buddha Yod Fa Chulaloke (Rama I), the crown is made of gold and inlaid with diamonds. Later, King Mongkut (Rama IV) added a large diamond to the top of the crown. The dazzling jewel, from the Indian city of Calcutta, is called the “Phra Maha Wichian Mani” or the Great Diamond.

The Sword of Victory
Known as “Phra Saeng Khan Chai Sri”, the sword symbolizes the king’s wisdom and strength as protector of the Kingdom. The blade is 64.5 centimeters long with a 25.4-centimeter hilt. When placed in its scabbard, the sword is 101 centimeters long and weighs 1.9 kilograms.

According to an inscription in Sukhothai’s Sri Chum temple, the sword originally belonged to the ruler of the Khmer kingdom of Angkor Thom. He gave the sword and his daughter to the Pho Khun Pha Mueang – the ruler of Srisatchanalai in the Sukhothai Kingdom – so as to strengthen bonds between their two cities.

Pho Khun Pha Mueang later gave the sword to his friend Pho Khun Si Inthrathit, the ruler of Sukhothai, and the sword remained part of the royal regalia until the fall of Ayutthaya in April 1767, when it disappeared after the Burmese sacked the ancient capital.

In 1784, a Cambodian fisherman cast a net in the Tonlé Sap lake and hauled up an old sword inlaid with precious gems. Knowing that it was not an ordinary weapon, he delivered it to Chao Phraya Aphaiphubet (Baen), the governor of Siemmarat province (now Siem Reap), which was then part of Thailand. Chao Phraya Aphaiphubet reported the finding to King Rama I who then had a royal official collect the sword. In 1785, the king ordered a new scabbard for the sword and had the hilt and blade restored to its old glory and to its place in the royal regalia, where it has remained ever since.

Later, King Rama IV had this wooden scepter replaced with one made from gold. It was designed so it could hide a sword and had the figure of a deity on its finial. This scepter was called the “Phra Saeng Sanao” or “Than Phra Kon Thewarup”, or the “royal staff with a deity”. However, King Vajiravudh (Rama VI), an avid admirer of Thai heritage and culture, chose to use the original scepter in his coronation ceremony.

The Royal Fan and Fly Whisk
The Royal Fan was introduced during the reign of King Rama I. It was made from a palm leaf trimmed with gold which branches from a handle made of enameled gold. The fan was originally known as the “Phatchani Fak Makham” or the “fan with a tamarind-pod shape handle”, which was also referred to as the “Walawichani”.

King Rama IV later pointed out that in the Pali language the word “Walawichani” stands for a whisk-like item made from yak’s hair. In Pali, the word “Wala” stands for the hair of a bovine animal that Thais call the “chammari”. So, King Rama IV ordered that a fly whisk be made with yak’s hair and be included in the royal regalia.

Later, the yak hair was replaced with hair from a white elephant’s tail and its name was changed to the “white elephant fly whisk”. Both the fan and fly whisk together are called the “Walawichani”.

The Royal Slippers
The Royal Slippers, made of enameled gold and inlaid with diamonds, were ordered by King Rama I. They were named the “Chalong Phrabat Choeng Ngon” or “royal slippers with a curved tip”.

Following an ancient Hindu belief, the slippers symbolize the land at the foot of the mythical Mount Sumeru, where the king’s  subjects live. During the Coronation Ceremony, the chief Brahmin ends the presentation of the royal regalia by placing these slippers on the feet of the newly crowned monarch.