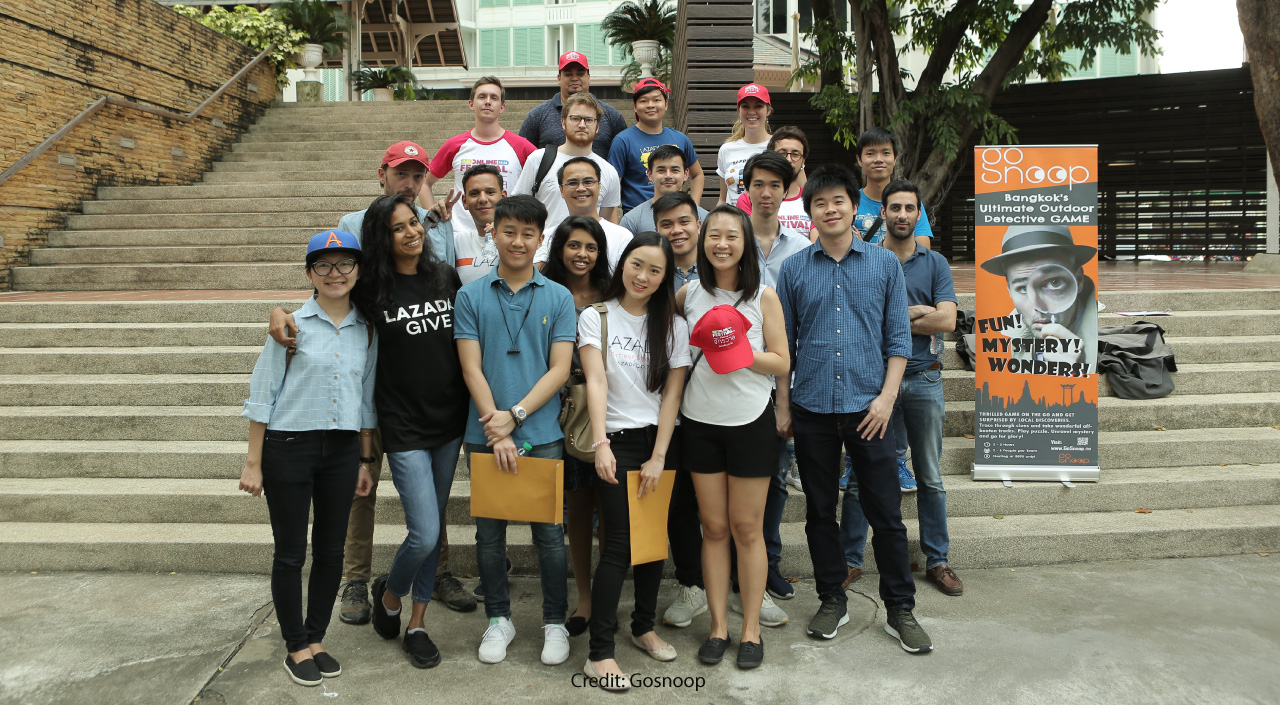 Experiential travel is fast becoming a top trend among travelers, with more folks looking for a deeper immersion in the places they visit, beyond just “hanging out in a resort” or “visiting the temple” as used to be the norm. On a recent outing with GoSnoop, a Bangkok exploration tour that turns historic parts of town into a detective adventure, I learned just how much fun it can be to “experience” old familiar sights in a brand-new way, all the while having a blast. 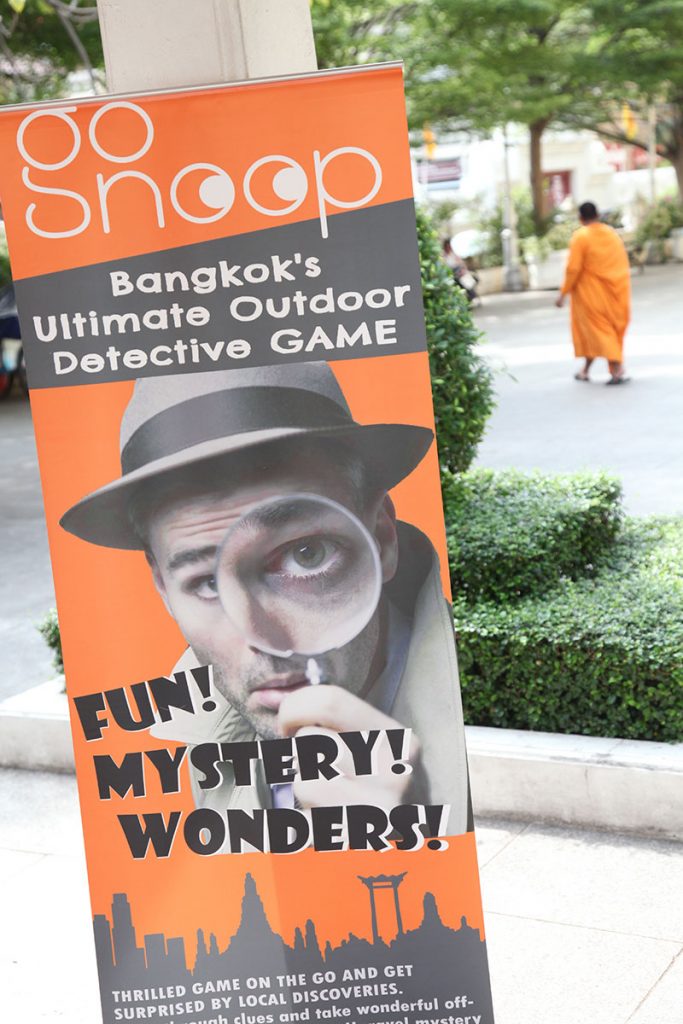 GoSnoop is a detective game suitable for youngsters, families, singletons and even large groups who want a fun and unique team-building experience while doing a bit of sightseeing. Set in Rattanakosin Island, each action-packed mystery game takes place in some of Bangkok’s oldest, historic neighborhoods, pitting combatants against each other and against the clock. Participants start off by meeting the “game master”, who then splits them into teams. Each team is given a bag containing a map, a variety of clues and a booklet explaining the tasks at hand and the route they will be following. They have just three hours to solve the mystery. 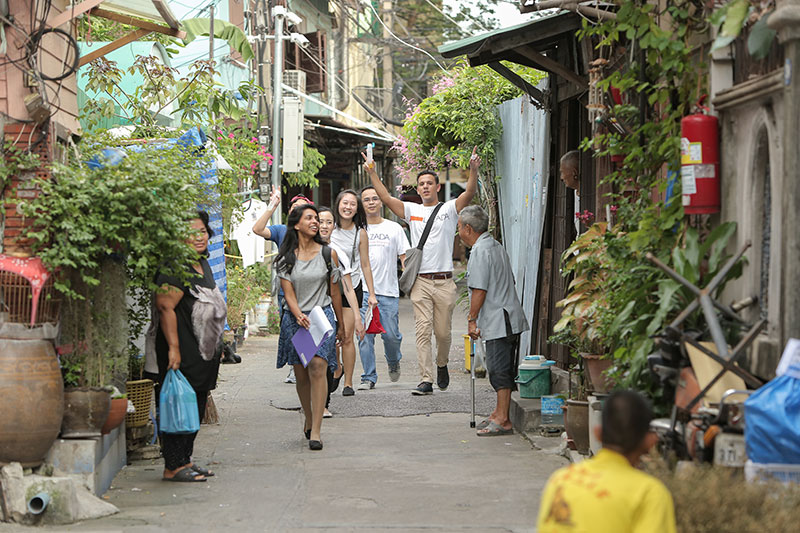 The mystery I helped solve was the one about a certain Mr. Somsak, who has gone missing with his family. With few witnesses and few clues in the hands of the police, our job was to solve the crime and beat the other teams in doing so.

The first site the investigation took us to was Wat Saket or the Golden Mount, where we were provided with a hint on how to open a locked coin purse that was in our bag of clues, as well as directions on what might come next. All the while, we got to take in one of Bangkok’s best views, learned a bit of history about the neighborhood (the booklet is filled with historical tidbits about the different places teams visit) and got to do a bit of exercise climbing the stairs to the top. 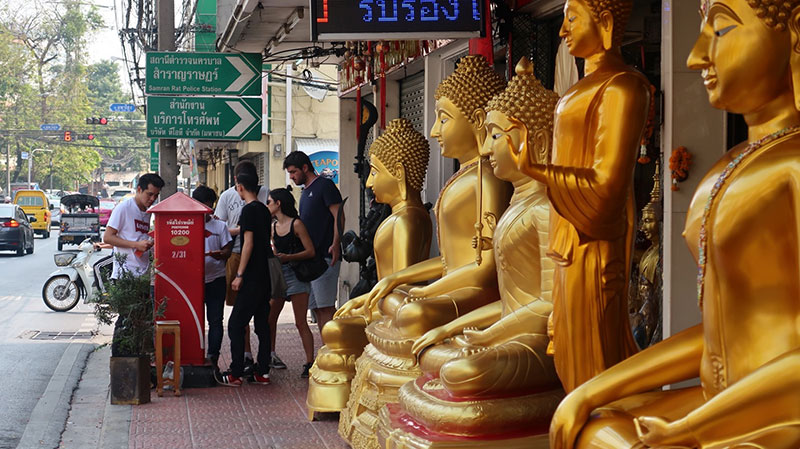 After that we proceeded to Baan Bat (Baan as in community, and Bat as in alms bowl) – a historical community where locals have been making alms bowls for monks since the 1700s. The trail of clues then took us to the heart of Sao Ching-Cha or the Giant Swing in the old part of the city, where some of Bangkok’s best street food can be found. Little eateries set in century-old shophouses in this area have earned a name for themselves for specializing in one or two dishes. 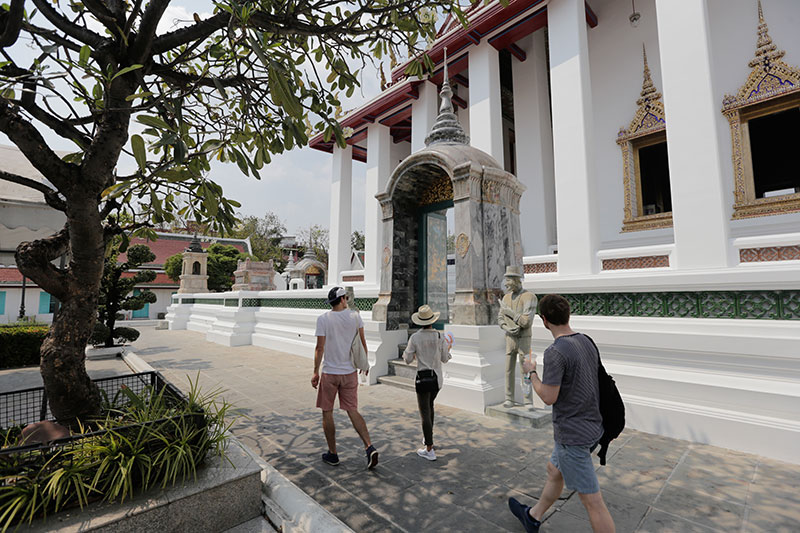 This would be a perfect way for visitors to be introduced to Bangkok’s off-the-track attractions, such as Phraeng Phuton – a square full of neo-classical shophouses dating back to the Rama V era in the early 1900s. This is perhaps one of Bangkok’s best-preserved heritage neighborhoods.

GoSnoop games also include local residents, which makes the experience even more enjoyable. For instance, one of the clues is a coupon that earns you a free scoop of ice cream at Natthaporn – a shop that has been serving homemade coconut and mango ice cream for close to 60 years. This game certainly makes sightseeing thrilling, as you start seeing the city with fresh eyes while you run around trying to solve the puzzle.

The creators of GoSnoop, a Thai-French duo, say they want to offer a memorable experience, filled with fun stories that people can take back home with them. 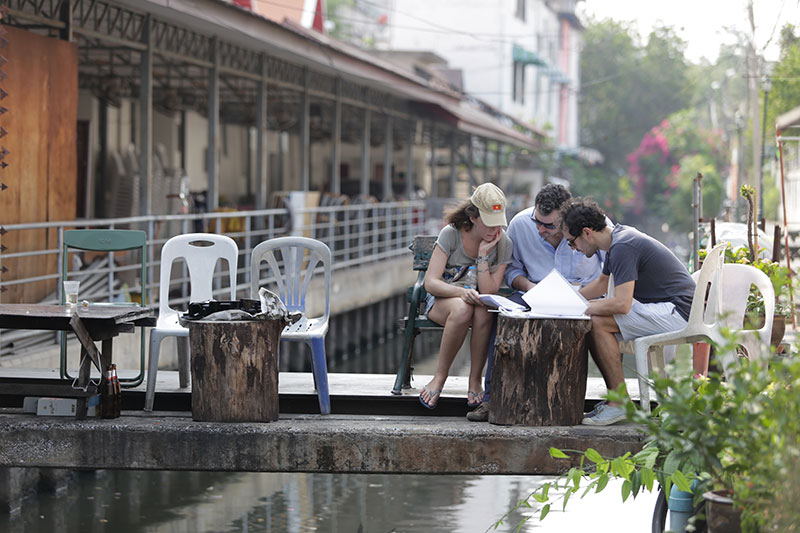 Since Bangkok is known for its diversity, rich history, tradition and a fun-loving atmosphere, the creators chose it as the perfect city for GoSnoop to flourish – and they appear to have succeeded on all counts. Participants who follow the clues through different neighborhoods find more than just the city’s hidden history unveiled before their eyes. One task, for instance, is finding out when the famous dessert shop Mont Nomsod was first set up. This task takes you to a half-a-century old shop, where you get to learn its stories and even sample its wares, before you are given that crucial date – which later helps you decipher the riddle.

Once the tour is over, participants meet at a local café, where the scores are tallied and each team’s theory about what might have happened to Mr. Somsak and his family are shared. Obviously, the team with the highest points wins, but if the mystery is not solved, the game master lets the cat out of the bag.

Apart from giving visitors a new insight into Bangkok, GoSnoop also helps test their powers of deduction and reasoning, making this a great team-building exercise for companies.

My only regret that day was that we all got so wrapped up in trying to solve the crime, we sometimes didn’t have enough time to linger at the sites. But then, this a good excuse to go back and visit the different sites again.

So, if you have a few hours to spare, I highly recommend joining a mystery hunt. You’ll get to see Bangkok through fresh eyes. 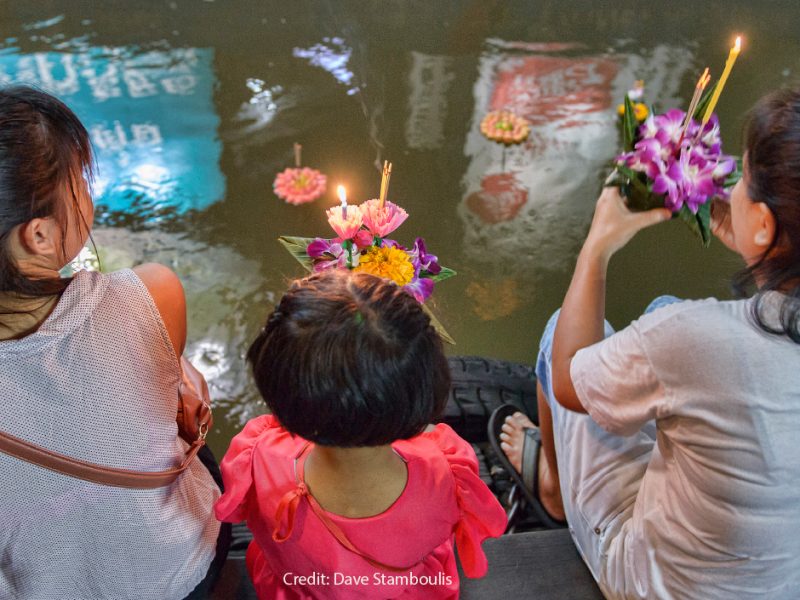