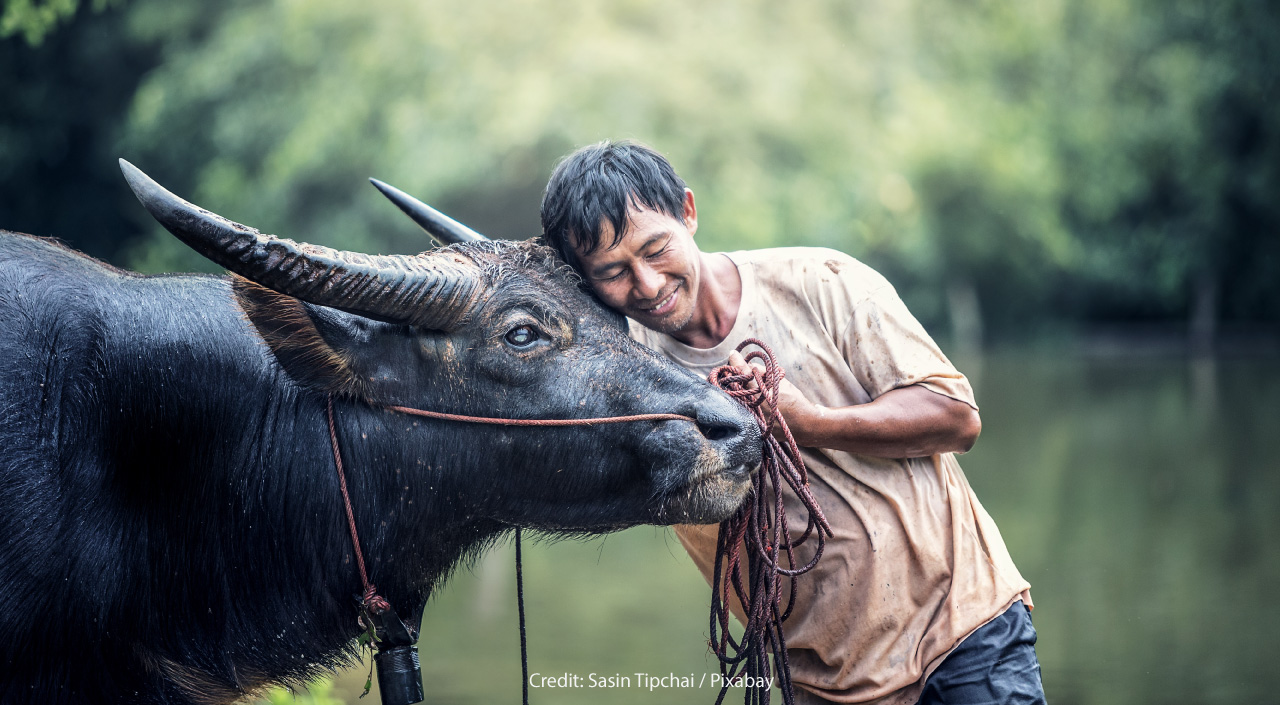 Visits to my grandmother’s dairy farm in Lopburi province have given me a love of cows. But while I have first-hand experience of cows’ kind and loving nature, I also feel passionate towards another gentle animal in the same family (Bovidae) – water buffaloes (kwai in Thai).

It is heartbreaking to learn that fewer and fewer of these noble creatures are being used to plough the rice fields in Thailand even though we’re an agricultural country. Farmers are resorting to “iron buffaloes” or modern ploughing tractors, while the long-time helpers of Thai farmers are being sent to the slaughterhouse for their meat and hides. The close bond between Thais and the creature they once depended on to cultivate their land is thus being slowly lost, as Thailand’s quiet rural beauty is overtaken by the machine-driven modern world. 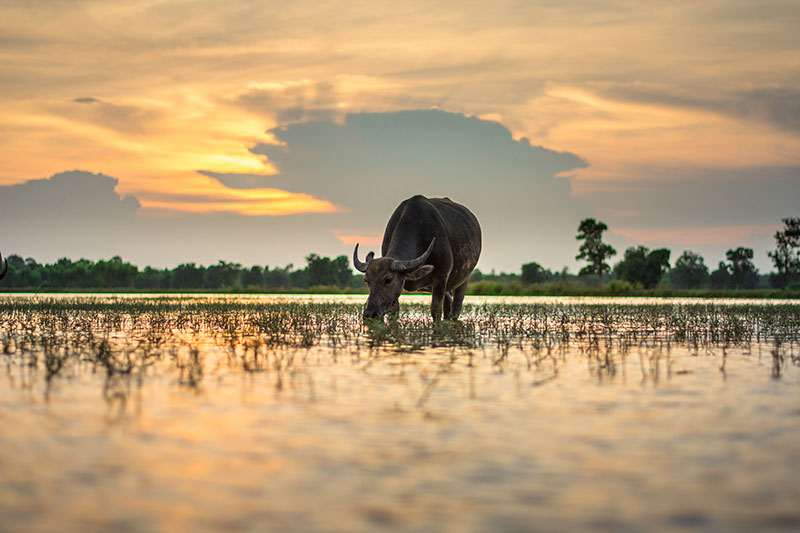 To better appreciate buffaloes and why they still hold an important place in our hearts, consider a few facts:

Swamp buffaloes (known in Thai as kwai pluck) are strongly built with big hooves. They can’t stand the heat which is why we often see them soaking in water or mud to cool down. Mud baths also help to get rid of the insects on their bodies.

Water buffaloes have wide jaws full of teeth. The lower jaw has 20 but the upper has just 12, with a gap where the front teeth should be. This odd arrangement gives them a unique, funny look when they chew their food. 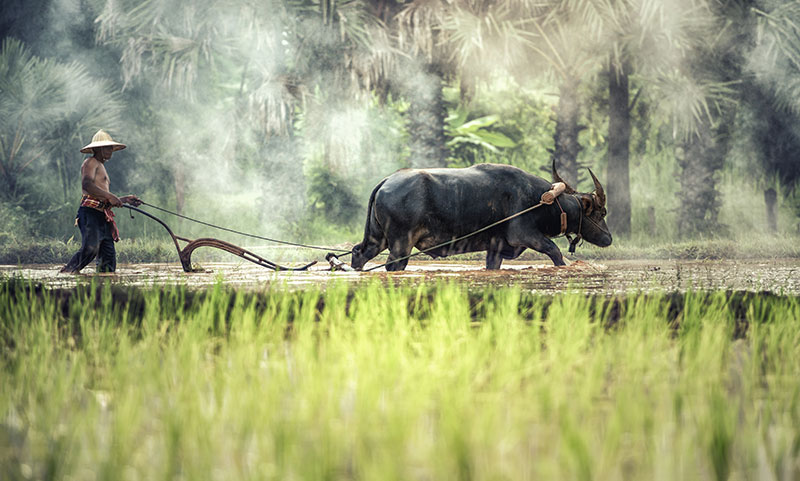 Usability and its decline
Water buffaloes have assisted humans in farming for centuries, especially in an agricultural country like Thailand. Fairly easy to domesticate, the strong creatures are put to work tilling rice fields and also transporting people, livestock and crops. Up until the late Ayutthaya period 250 years ago, Thais would ride buffaloes into war against enemies from neighboring states. One such historical episode is recounted in the movie “Bang Rachan”, which depicts how villagers of Bang Rachan fought hard to stall the advance of the much larger Burmese army.

Due to the rise of modern farming which swapped the beasts of burden for machines, the number of water buffalo in Thailand dropped from more than three million in 1996 to less than 1.24 million in 2011. Many of them were sent illegally to slaughterhouses in neighboring countries where their meat and hides fetched higher prices than in Thailand.

However, in many countries, buffaloes are also kept for their milk, which is consumed as an important source of protein. Buffalo milk is richer in fat and protein than that of dairy cows (7 to 9 percent of fat versus only 3 to 4 percent). Water buffaloes’ milk is especially thick in texture, making it ideal to be processed into cheese, such as the high-quality mozzarella  made in Italy.

Buffaloes can also be used to manage uncontrolled growth of vegetation in natural wetlands. By grazing, they can help open up closed swamp areas and extend habitats for wetland birds and other wildlife.

Buffaloes in culture, tourism and preservation
While elephants are the national animal of Thailand, swamp buffaloes or “carabao” are considered an unofficial national symbol of the Philippines. They have been part of the agricultural life there for centuries, just as in Thailand.

In the Philippines, India, Malaysia, Cambodia, and Thailand, one of the most important and popular days on the rural calendar is the water buffalo racing festival. In Thailand, the annual races are held at the end of Buddhist Lent around mid-October, in Chonburi province. The sprints held in flooded rice fields are nothing if not entertaining, but the main purpose of the festival is to promote the preservation of buffaloes as their numbers decline by the year.

Water buffaloes have been part of Thai culture for centuries and appear frequently in Thai literature. As a result, there are many idioms or expressions in Thai related to buffaloes. See saw hai kwai fung or “to play the fiddle to a water buffalo”, is the equivalent of “casting pearls before swine”. In other words, offering advice or something valuable to those who don’t appreciate it.

It is also offensive to call another person a “kwai” or to compare someone’s intelligence to that of a buffalo. This implies that buffaloes are not smart animals, but in reality buffaloes are patient and obedient animals, especially with farmers, and so sometimes they seem to be mindless beasts of burden merely following orders without a thought of their own.

To ensure that water buffaloes don’t disappear altogether from Thailand, late King Bhumibol Adulyadej set up a Royal Buffalo and Cattle Bank, which has helped preserve their number while aiding poor farmers in rural areas by loaning them animals to help cultivate their fields.

There is also an increasing number of so-called Buffalo Villages, especially in Suphanburi province’s Sri Prachan district, where tourists can visit and interact with the creatures while learning more about traditional farming methods. The Buffalo Village in Sri Prachan is open every day offering tourists an unmissable opportunity to try tilling the rice fields with buffaloes.

With strong efforts from non-profit organizations and, hopefully, from the government, Thais and foreign tourists are gradually becoming more aware of how precious our soon-to-be endangered friends are. Perhaps the gentle and noble kwai still has a furrow to plough in Thailand’s future.