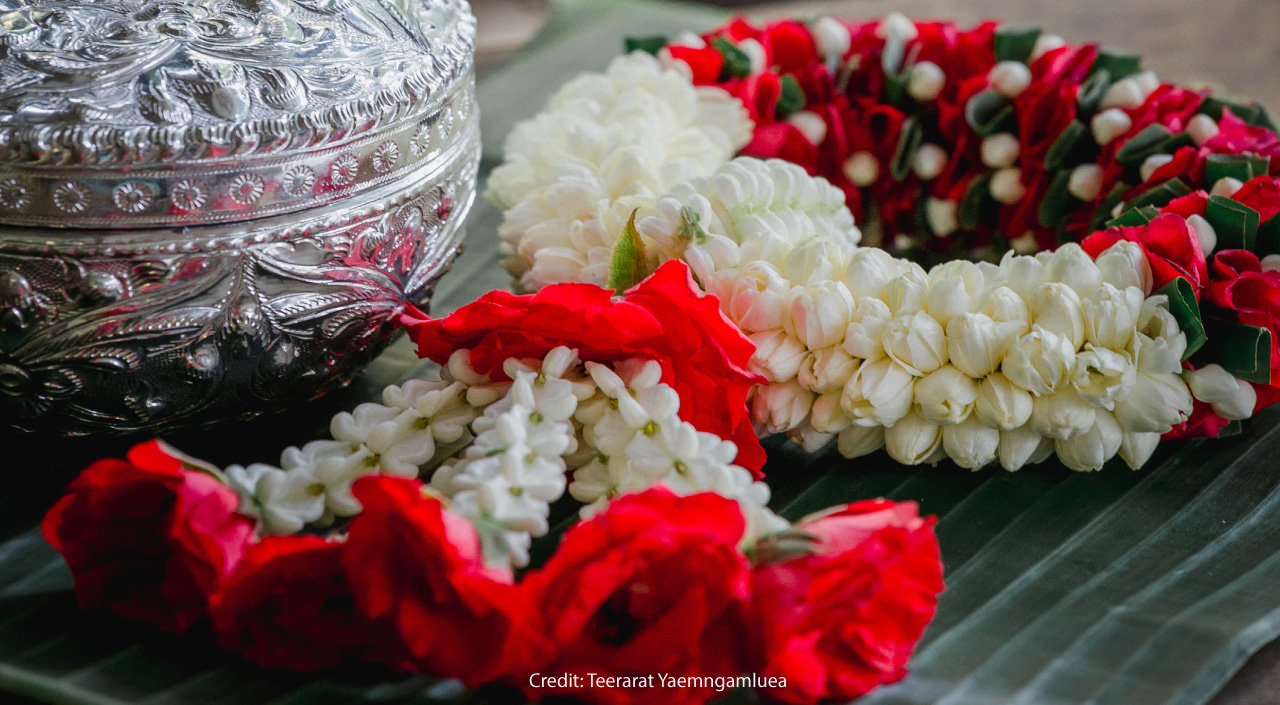 A vivid Songkran picture in many people’s minds would be one of a colorful crowd frantically splashing water on each other with so much fun on a balmy summer afternoon. However, many Thais love celebrating Songkran in a more traditional way: they would journey back to their hometowns to reunite with their parents and elder relatives. Then, they would take part in the rod nam dum hua ceremony where sons and daughters come together to pour scented water onto the hands of their parents and grandparents and offer them beautiful garlands in exchange for their blessings to mark an auspicious start to the Thai New Year.

Let’s take a closer look at some of the traditional essentials used during the ceremony.

Nam Ob
The chilled water used in rod nam dum hua is usually scented with traditional Thai perfume, or nam ob, and added with rose petals and jasmine. Nam ob is used beyond Songkran on such occasions as a merit-making ceremony, wedding and even a funeral. Nam ob has been historically used since the Sukhothai era, but during the reign of King Phutthaloetla Naphalai (Rama II) the perfume gained in popularity as courtiers used the refreshing fragrance to mask their body odor. Soon it became widely available and popular with commoners as well.

Nam ob contains essential oils extracted from fresh fragrant flowers such as dok mali (dok means flower) or jasmine, dok kaew or orange jasmine, or dok chommanard or bread flower (Vallaris glabra). The essential oils are then mixed with herbs and spices. Some of the well-known ingredients include kaffir lime, pandan leaves, sandalwood, frankincense, wax, nutmeg, brown sugar, white sugar, borneol camphor – a natural resin collected from the trunk of the evergreen camphor tree – and musk from chamodched or the small Indian civet (Viverricula indica) for a stronger and long-lasting scent.

It takes a lot of effort and time to make nam ob. The process involves mixing part of the ingredients together in water and boiling it at the right temperature. The flower and herbal extracts are then perfumed with the scent of candle smoke several times in a closed container to intensify the scent. Nam ob is usually available in light yellow color and can be mixed with powder. The mixture is applied to the skin with the scent and coolness lingering for a long time.

Flowers
One thing that is indispensable during Songkran or in a Buddhist ceremony is a collection of flower garlands. Three main types of fragrant flowers are often used for making flower garlands: dok mali (jasmine), dok champee (White champaca) and roses.

Over 200 species of jasmine are native to the warmer regions of Europe, Africa, Asia, and the Pacific. Jasmine is also a symbol of purity synonymous with Mother’s Day in Thailand because its color symbolizes the purity of a mother’s milk and love. There are about 45 types of jasmine around the world, 15 of which are native here. The type of jasmine that is widely used as a garland’s main body is Malila (Jasminum sambac) or Arabian jasmine.

Dok champee is also white and oftentimes mistaken for dok champa (Magnolia champaca), the yellowish flower that smells as good but is of a different color. Dok champee, a native plant of south China, Malaysia and Indonesia, has more than 50 species and is usually used in the middle or the ending part of a garland. In the old days, people would collect dok champee and simply put the flowers in small trays as an offering to the Buddha or to freshen up a room with its sweet fragrance.

Roses are more popular nowadays as an essential part of a garland. There are so many species grown in northern Thailand where the weather is cooler. Unlike dok mali and dok champee, roses come in different vibrant colors including red, pink, yellow and orange. The one type that is normally used to make garlands is the hybrid tea rose, used to decorate the middle and ending part of a garland.

Scented Powder
One last element used in the rod nam dum hua ceremony is the pang ram scented powder. The powder is usually mixed with water and gently applied to the face and skin thanks to its cooling properties. It was originally used as a traditional remedy to protect the face and skin from dampness and the sun.

Like nam ob, pang ram – available in grains – is made from aromatic flowers, herbs and spices and a mixture of fine talc or chalk and Thai perfume. Then, the mixture is molded into small cones that are left to solidify. It will then be perfumed several times for at least three days in a closed container suffused with smoke from a mixture of fragrances from herbs and spices. The finished product can be dissolved in water when used or mixed with nam ob for extra fragrance and coolness.

Happy Songkran and enjoy the traditional part of it, too!