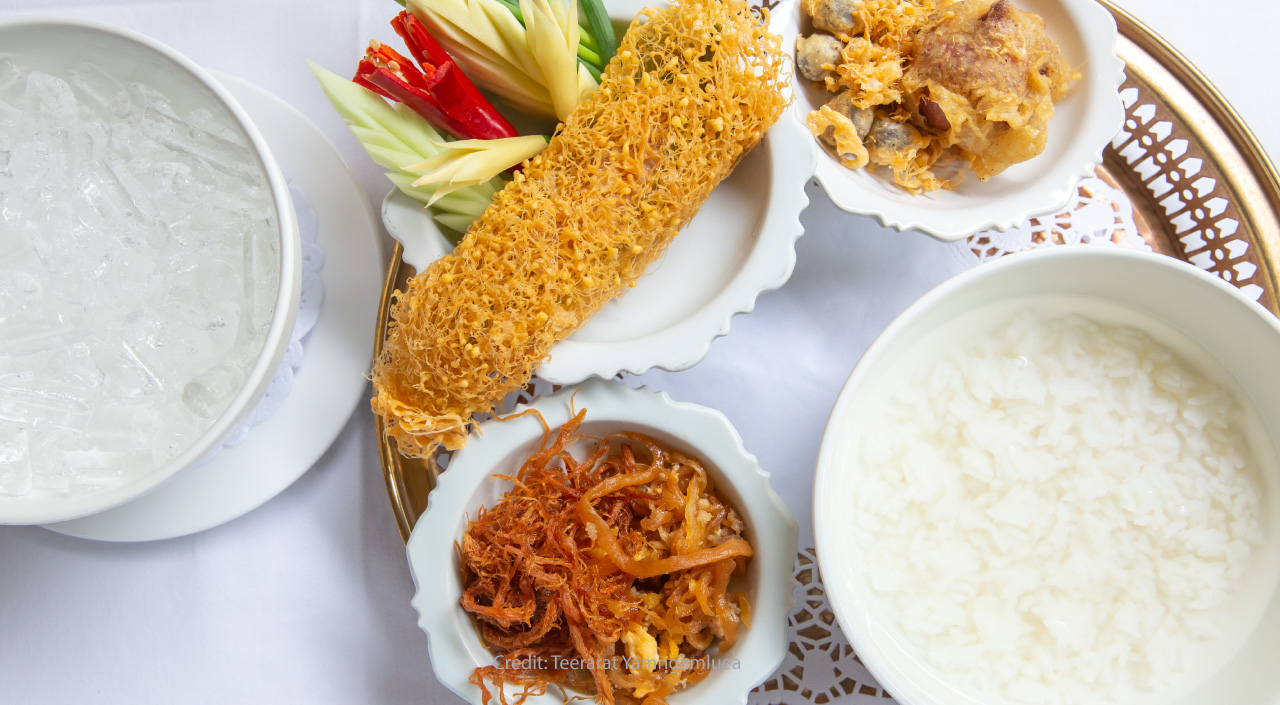 Summer’s here and so is “khao chae”, Thailand’s best-known traditional summer meal. Khao chae (literally “rice” +  “soaked”) is rice soaked in chilled fragrant water and best eaten with an assortment of side dishes that chiefly include stir-fried sweetened pickled turnip with eggs, luk kapi (fried shrimp paste balls), and stir-fried sweeten shredded fish. It was once a favorite summer dish in the palace preferred by kings, but it is now a summer delight enjoyed by all.

There are two types of khao chae: Khao Chae Mueang Petch (“khao chae from Phetchaburi”) and Khao Chae Chao Wang (“khao chae of the royal court”). The former is a minimal yet authentic version of khao chae originally created by the Mons, an ethnic group who has made Thailand their home since the Ayutthaya era after fleeing their homeland in what is now Myanmar.

In a Mon household, khao chae is prepared for special occasions such as Songkran when the dish is put together before sunrise and then offered to Buddhist monks on their morning alms rounds and also used as part of the offerings for deities. After the morning rituals, the elders are then served a meal of khao chae, and finally, the rest of the family would join in.

The dish is called Khao Chae Mueang Petch because Phetchaburi province has hosted a large vibrant Mon community that still exists until today. In the past, the province was also a favorite summer destination for Thai royalty on vacation. That’s how khao chae came to be known as a palace dish.

Khao Chae Chao Wang (or royal khao chae) is therefore an adaptation of the traditional khao chae for the royal court that comes with additional special ingredients. This version is known for its complexity and lavish presentation.

Chao Chom Manda Klin (Klin Kotchaseni), King Mongkut’s (Rama IV) consort of Mon descent, was the one who introduced the dish to the Siamese court and soon it became one of the king’s favorite dishes. Over time the palace’s chefs developed several palace recipes of khao chae that were outstanding in both flavor and presentation. The extra side dishes from the palace recipe included stuffed sweet-pepper, stuffed shallots, shredded sweetened beef or pork, raw sour mango, and krachai (finger root or Chinese ginger).

The real challenge in the past lied in chilling the dish’s scented water. Thailand had its first icehouse in 1905, and refrigerators were not imported until many years later. Thais in those days cooled drinking water by storing it in earthen jars that were sunk partially underground. When the outer part of the jar was covered with condensation, the water inside would be cool enough for use.

To make the water fragrant, jasmine flowers or Damask rose petals were added to a jar of water and left overnight to absorb the fragrance. The edible flowers needed to be properly cleaned before use. For extra coolness, Thais traditionally added borneol camphor and menthol to the scented water. Sometimes a jar of water was perfumed by filling it with smoke from scented candles (tian op).

Start from the saltier dishes such as luk kapi and krachai, then take a sip of chilled khao chae. Chew them together to experience the complexity of flavors in your mouth. Then try the sweet side dishes such as fried pickle turnip or shredded  sweeten fish for an even more flavorful experience. The meal traditionally wraps up with tang-mo pla hang (watermelon topped with dried shredded fish), if provided.

Although in the past, khao chae was served only during the summer, nowadays you can enjoy khao chae all year round at many famous Thai restaurants. But believe me, it’s best to enjoy the dish during this time of the year.