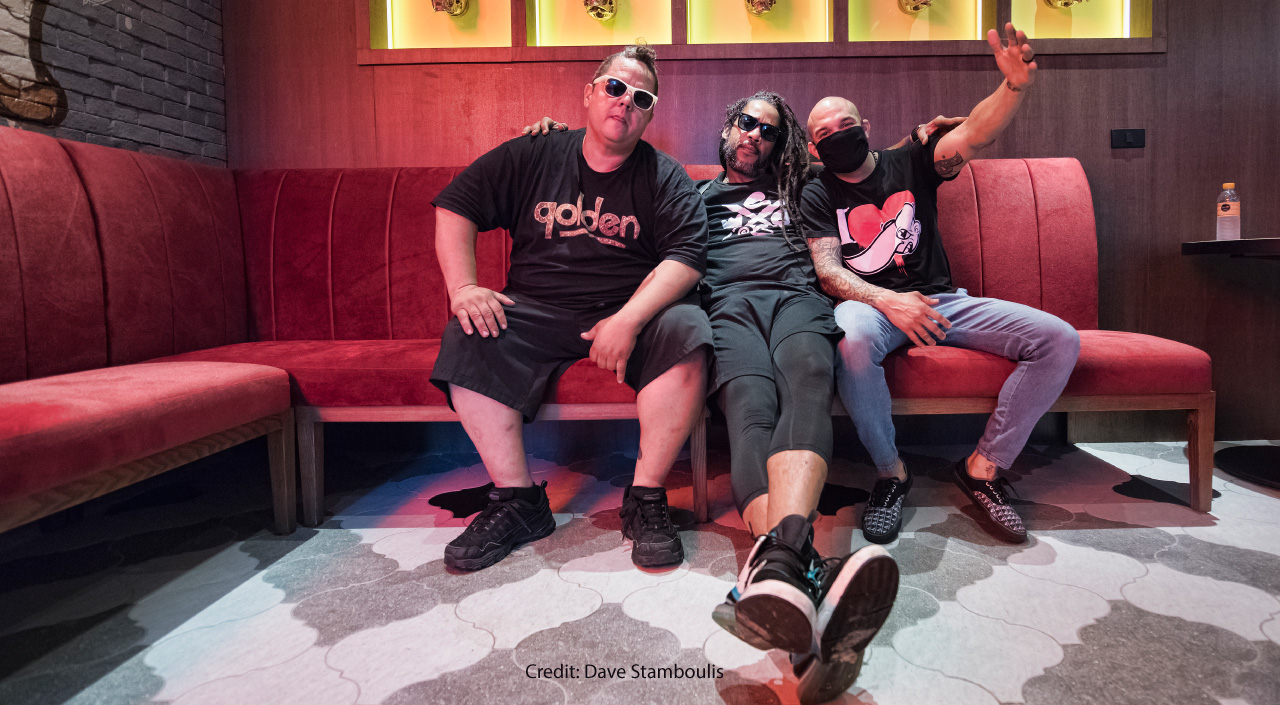 Los Atico’s Art on the Walls

Sukhumvit Soi 11 is reinventing itself as a food mecca, with last month’s opening of its new community mall, featuring a slew of chic new eateries and bars. One of the coolest of the bunch is Los Atico, a Mexican-styled speakeasy set up above the Cali-Mex Bar & Grill, which you ought to check out, not just for its margaritas and signature “Tequila Makes My Clothes Come Off” cocktail, but for its incredible artwork, done by three cutting-edge American artists, who recently brought their talents to Bangkok to do the colorful décor for the bar, showcasing their flair and sharing some of their storybook history and background as well.

Ruben Ubiera, (aka Le’ Creep), and Golden are three unlikely comrades from a tight artist community that are at the forefront of the nouvelle American art scene, combining graffiti and urban art, and putting it on the radar worldwide. Ubiera, the mouthpiece of the group, is at ease among crowds, probably due to his varied background. He grew up in the Dominican  Republic, attended fine art schools and settled down in Massachusetts, later working as an art director. He moved to Fort Lauderdale to study graphic design, but ended up on the advertising end of things, chasing big contracts.

This all changed when his mother died from breast cancer, as during his grieving process, Ubiera remembered her belief that he would always become an artist, and he soon started painting on salvaged wood, cigar boxes, discarded doors, and any other recycled materials he could find, eventually using up his savings and becoming the “starving artist” his mom had predicted. A strong work ethic though and his unique “Postgraffism” style, combining surrealism, graffiti art, and his formal art school techniques gave Ubiera a leg up, and he was voted Best Street Artist in Miami in 2016.

Golden had no background in art, but met Ruben by chance in the streets when he saw him painting a mural and was so enthused that he asked if he could be his assistant. Golden helped Ubiera with computer art and graphics, and eventually quit his job to become a full-time artist, picking up a spray can for the first time and creating marvelous works.

Orgie, the third member of the trio, grew up in Miami, and had an early obsession with graffiti art, drawn to the secretive and rebellious lifestyle that the “spray by night” painters tend to have. The three met in Wynwood, a working-class Puerto Rican neighborhood in Miami, that was becoming a forlorn slum, infested with drugs, crime, and violence. Despite its downfall, the area served as a haven for street artists as the cops were too scared to come and harass anyone in the middle of the night, and thus a wave of young renegades began to cover the walls of buildings with their work.

The art grew and grew, and eventually a few intrepid gallery owners bought warehouse spaces there due to the cheap rents, and renegade galleries began to function. The artists of Wynwood began gaining publicity, and eventually, an entire area of building walls that were drenched in graffiti became known as the Wynwood Walls, which soon started attracting tourists and art-lovers alike, which in turn morphed into designer cafés, restaurants, and up-market establishments moving in and turning  he formerly impoverished slum into re-gentrified hot properties. 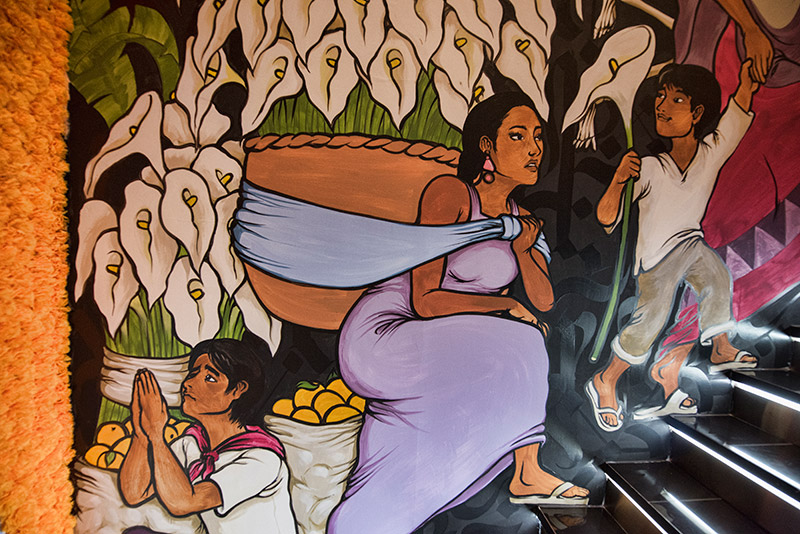 Graffiti went from being seen as vandalism to being more appreciated as an art form, and during this time, Ubiera says he saw Orgie’s work and realized that art with the spray can was not only more practical (one can cover in a few days what would normally take weeks), but that it was spontaneous and free of many of the rules he’d learned in art classes.

“You don’t need a traditional flat white canvas to create art. You can paint on a door or an old piano, and you are free of boundaries. Other than Native American art, all American art in the past has come from elsewhere, from the French, from the Dutch, but this is the first totally unfunded and original American art movement,” Ubiera explains.

As the trio’s work became more known, and as Wynwood became the place for prominent street artists from around the world to have their murals displayed, this translated into bigger and more lucrative commissions. Orgie painted for Ludacris, the American rapper and actor, at the Art Basel exhibition, and soon his motto of “This isn’t getting me anywhere but I love it” had become passé, as he’d become one of the most requested artists in Miami. 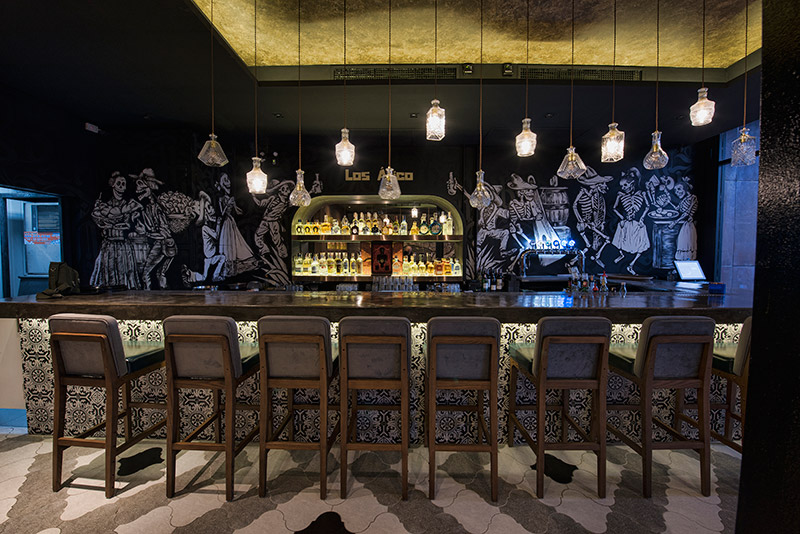 For Cali-Mex, the artists designed both their Hong Kong basement bar and the new Bangkok attic bar, utilizing their influences from Mexico and its distinctive culture. The theme “Day of the Dead” prevails behind the bar, while large murals of colorful skeletons and campesinos (Latin American farmers) grace the staircases. Additionally, a giant glow in the dark mural sits outside on the entire back of the building. 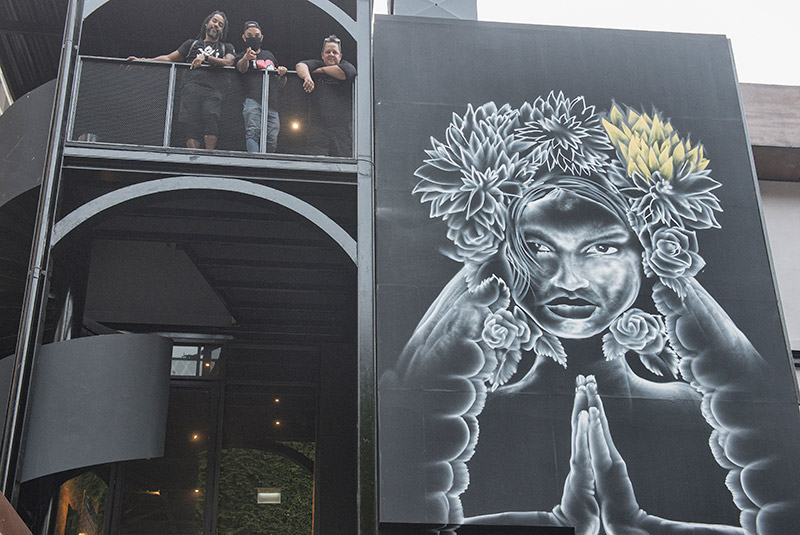 Ubiera, Orgie, and Golden know the sky is the limit for their art right now. They are traveling the world, sharing their culture and learning about new ones, and as they all say, “modern graffiti art is the gorilla in the room,” in that nobody talks about how powerful it can be and while it is only now gaining respect in the world’s public eye, it looks to be here to stay and make an indelible mark on the art world.