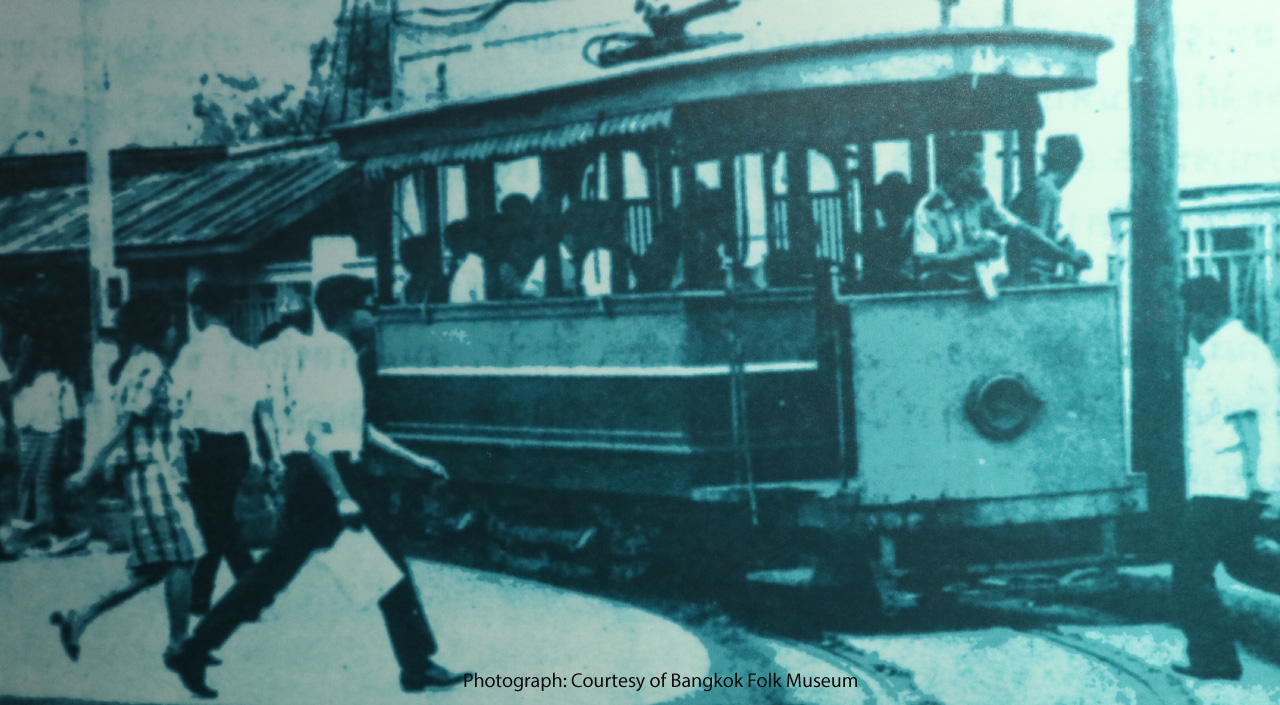 Bangkok has embarked on a construction frenzy to extend the MRT and BTS Skytrain networks to the suburbs for commuters’ greater mobility. About a century and a half earlier, Bangkok was criss-crossed with canals, and paddle boats were the predominant mode of transportation. The Siamese made quick jaunts between their homes and temples and markets by boat. The fastest way to get to the city center was by paddling through the city’s vast network of canals and rivers. But waterborne transport was much too slow even in those days.

King Chulalongkorn (Rama V) had foreseen how Bangkok was going to expand quickly as the population grew. The monarch believed that a more efficient and rapid mass transit system was key. So in 1888, the king introduced the first railroad to Siam and granted a concession to two Danish entrepreneurs – Alfred John Loftus and Andre de Plessir de Richelieu – to build and operate Bangkok’s first tram network.

With a tramway track built along Charoenkrung Road, the first trams plied the “Bang Kholaem” line between the City Pillar Shrine and Thanon Tok (at the General Post Office) in Bang Rak district. These wagon-like trams relied on real “horsepower” as they were hauled by two pairs of horses along a tramway track. The beasts worked in shifts and rotated between stations to avoid overwork.

The new rail transport was not so popular at first. With the ride ridden with an endless series of jerks and yanks, the tram journey was far from smooth as silk – you had to contend with the sight and smell of horse dung. High overheads (house rents and horse bills) forced the original operators to sell the business to an English company in 1893. Over time the business fell into the hands of another Danish company.

It was not until 1894 when the tram system began to turn profits as the horse-drawn machines were replaced by electric trams. These 40-horsepower electric trams were powered by electricity from overhead lines. Some areas in Bangkok were newly named after certain power poles along the tramway and are still called that way to this day. In Si Sao Thewet (literally “Thewet’s Four Power Poles”), for instance, there used to be four electric poles that provided electricity to the trams. Unfortunately, these power poles are long gone. 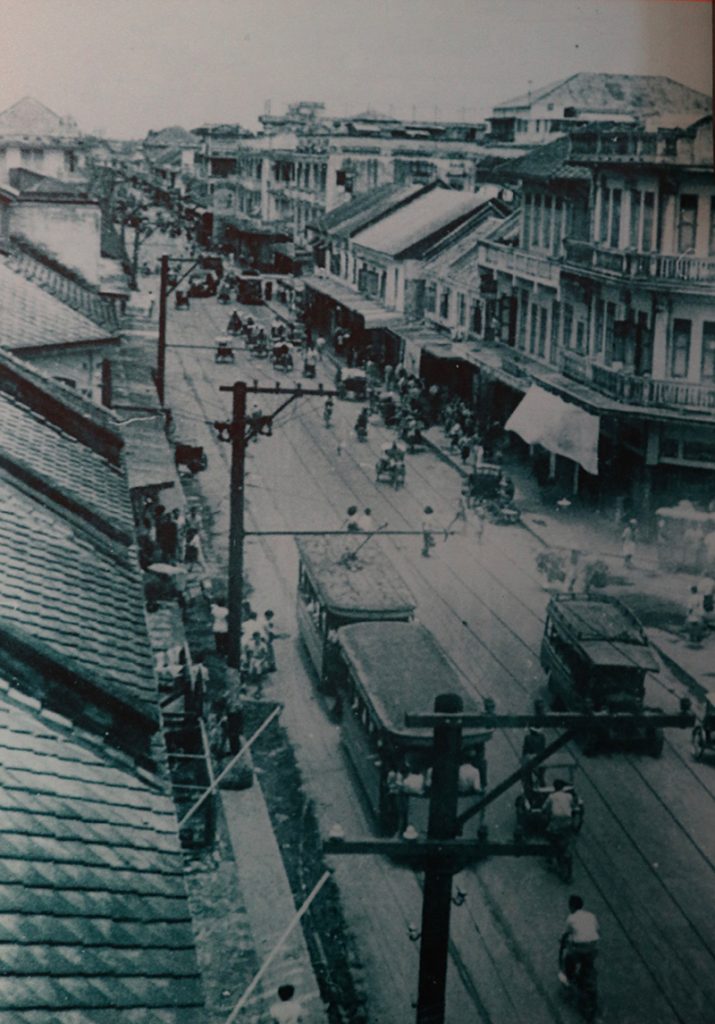 Trams once plied the streets of Bangkok | Photograph: Courtesy of Bangkok Folk Museum

Since the trams ran on a single tramway, every 500 meters there would be a shunt for one tram to give the right of way to another one. This way the trams could share the same track. In order to prevent derailments or accidents, the tracks received daily maintenance to ensure the tram services’ safe operations.

Passengers boarded the tram and alighted at designated stops marked by a colored metal flag. A tram could carry up to 60 people. In its glory days the tram route was extended gradually and at one point was 45 km long. The tram services operated on seven lines: Bang Kholaem Line, Samsen Line, Dusit Line, Bangsue Line, Hua Lampong Line, Silom Line, and Prathumwan Line.

A tram network was soon introduced to other provinces as well, such as Lopburi, Chiangmai, and Songkla. At that time, Siam hosted one of the earliest electric tram systems in the world, even before many countries in Europe and Asia.

Tram services were in business for only 80 years. After World War II, the fast-growing urban sprawl led to more roads being built and more automobiles imported. With the tramway running along the middle of roads, tram services started to cause traffic jams, and made worse by considerable overlap between the bus and tram lines.

Finally, the Metropolitan Electricity Authority that owned and operated Bangkok’s electric tram system during their waning days decided to scrap the old and clunky tram fleet for good in 1968. 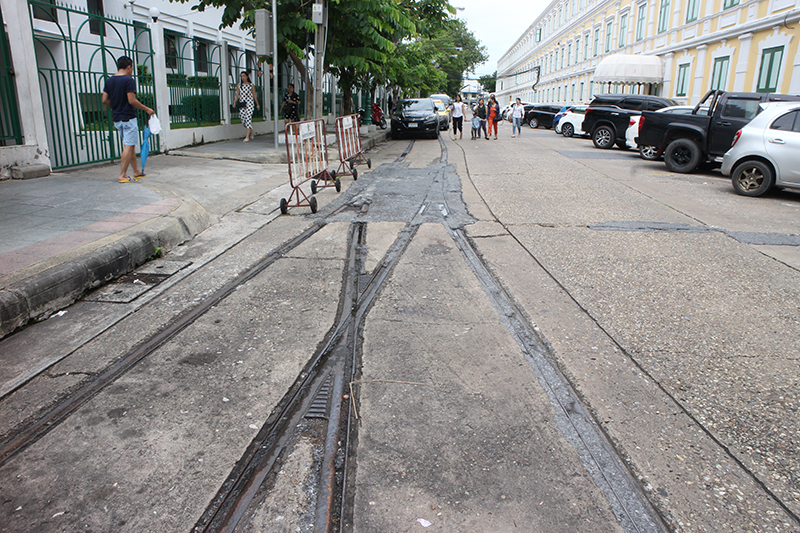 The last vestiges of the tramway tracks near the City Pillar Shrine
Photograph: Bangkok Folk Museum 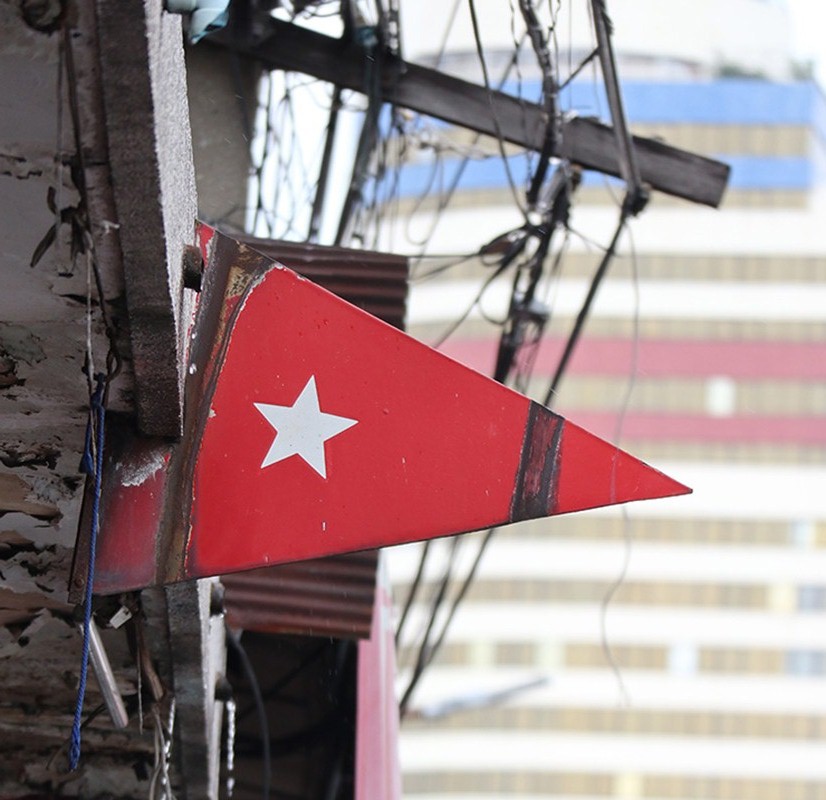 Nowadays, there are hardly any traces of the tram system left. But we can learn about Thailand’s tram history from old pictures and at museums, or by asking the elderly who had a tram ride when they were young.

However, those who are interested in looking for remnants of the Bangkok trams could still be able to find the last vestiges of the first tramway track that lies between the City Pillar Shrine and the Ministry of Defense across from the Grand Palace. There’s also the last surviving colored metal flag that marked a tram station, still hanging from a building on Yaowarat Road (Bangkok’s Chinatown) heading toward Mahachai Road, between Charoenkrung Soi 8 and 10.