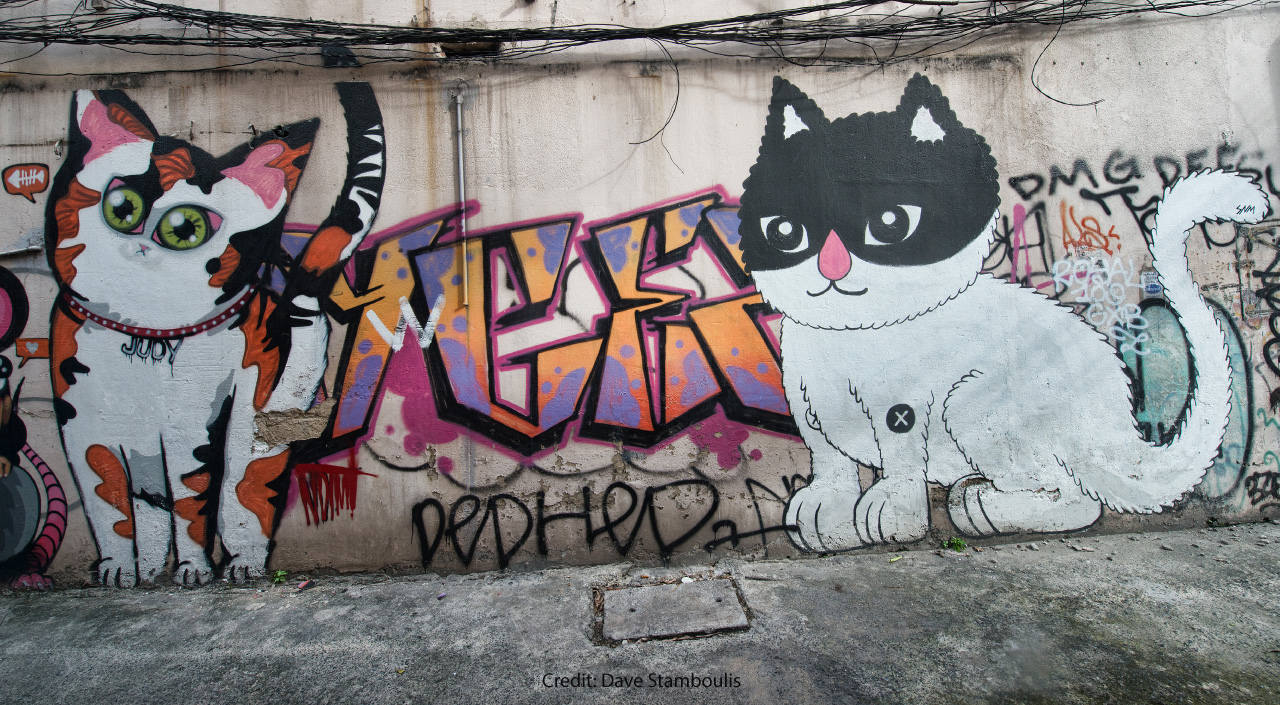 Chinatown has undergone a wonderful renaissance over the past several years. While the construction of the MRT has certainly torn up streets and feels a bit more than invasive, at the same time the area has been lucky enough to escape the rampant malls and condominium buildings that has become an eyesore pretty much everywhere else across town.

While change has come to Chinatown, it has come in the form of bohemian new art galleries like Speedy Grandma, hip fun bars like the gin lovers’ Teens of Thailand and lively Tep Bar over on happening Soi Nana, as well as some great new creative eateries like 80/20, where they source 80 percent of all the menu ingredients locally, or 100 Mahaseth, which serves Isaan-fused nose-to-tail cuisine. Accompanying all these new arrivals has been an explosion of colorful street art, which has livened up some of the narrow streets and alleys, and made wandering around the backstreets of Yaowarat and Charoenkrung all that much more pleasurable.

Half a decade ago, Bangkok was a pretty grey place. It still can be on those days when the PM2.5 fine particulate matter hits 150, but even on those clear winter days after a storm, the streets used to look pretty soulless. In 2016, the Bukruk Urban Arts Festival changed much of this, bringing a large contingent of artists from all around the globe to show off their stuff and try to enhance the city as a bona fide Asian arts capital. Large areas around the Klong San Saep near the Ratchathewi BTS station and near the Chao Phraya river were chosen as venues for painting public street murals, actually supporting art that wasn’t only in a museum, and things kind of took off from there. While it might not be on the level of the street art walks that entice travelers to historic Georgetown in Penang, the colorful additions really have made it that much more pleasurable to go exploring in Chinatown. 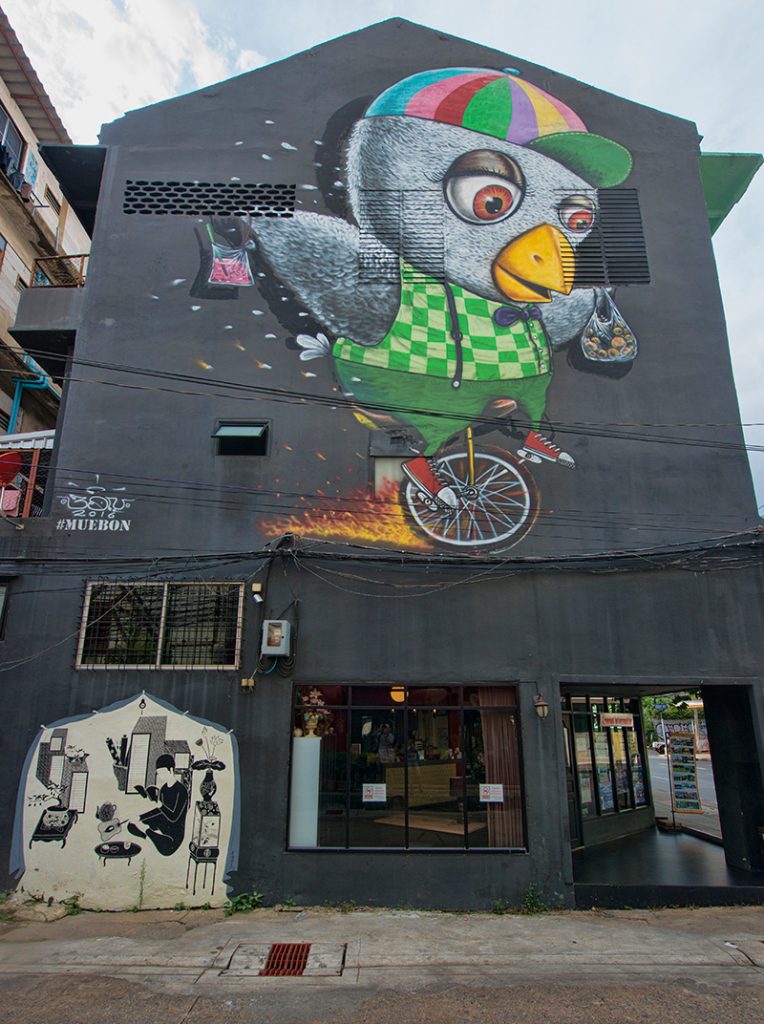 Start your art stroll by heading up Charoenkrung to the areas of Soi 28, 30 and 32. Soi 32 is the best of the lot, as the dead end alley leading to the river doesn’t look like much at first, but walk down to the end and you’ll find the entire walls down here covered in beautiful murals. Thai artist Alex Face who is noted for his iconic bunny rabbit character “Mardi” has a large painting here, as does Bonus TMC, who paints large scowling bears. There are often tuk tuk drivers here who park alongside the walls, making for some excellent iconic Bangkok shots.

One soi over you’ll find works by Portuguese Alexandre Farto, who goes by the moniker of “Vhils” and is an avid experimentalist, and by Italian Sten Lex, who has done a large stencil piece here called “Storm”, which looks like dozens of hanging electrical cables (the artist was obviously inspired by walks around town!). Vhils’ lifelike “Scratching the Surface” carving project is displayed here along the back wall of his Portuguese Embassy, who donated the space for him to show off his incredible talents. 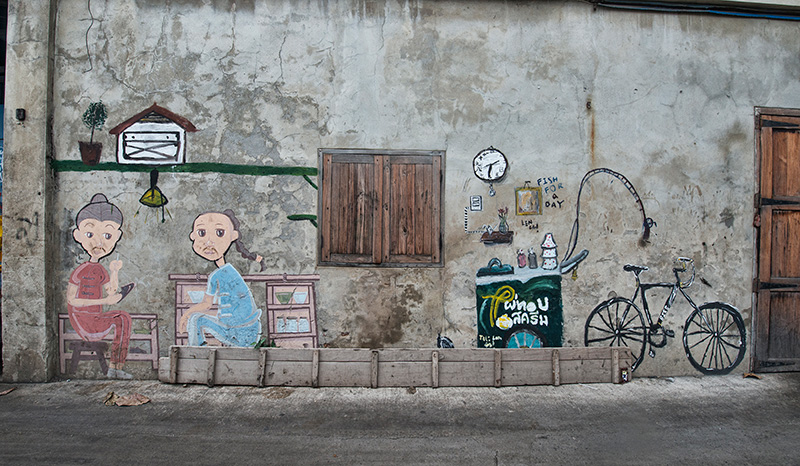 Further in to the heart of Chinatown, the small alley Trok San Chao Rong Kueak is a great place to wander at any time. Running off of Soi Wanit 1, and just a five-minute walk from the Marine Department river ferry pier stop, the lane leads
down to the river, with other narrow passages barely big enough for one person to fit in accessible from the alley as well. 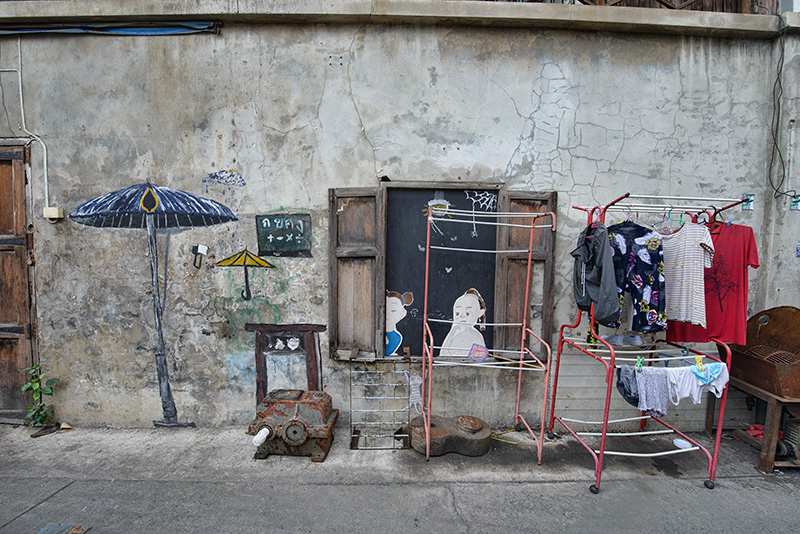 An endless long ship painting covers one of the walls leading down the lane, but on the other side, scenes of local life, such as people doing laundry or a couple sitting at their window blend in seamlessly with the surroundings (which often have real life versions of the exact same thing!). Wandering through here takes you through old atmospheric shrines, traditional neighborhoods, and along streets full of mounds of rusted auto parts, which combined with the street art, make for some amazing photography. 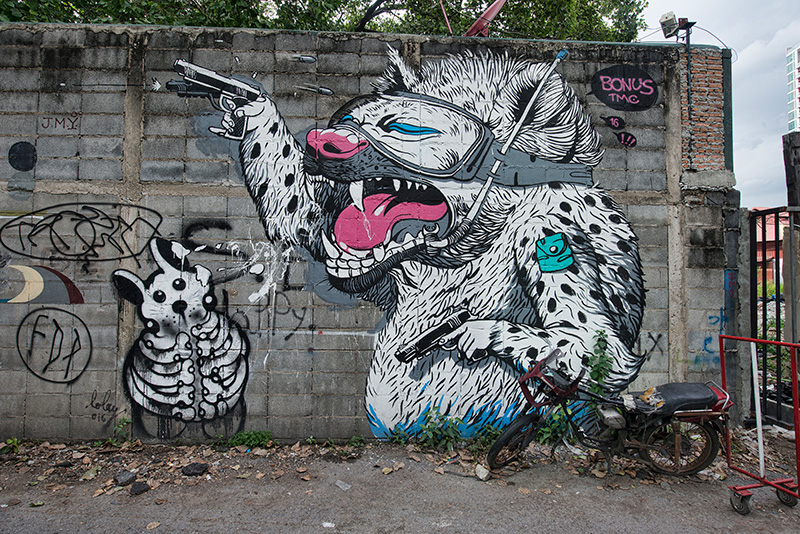 Back out on Song Wat Road headed into the center of Chinatown, you’ll come across the work of ROA, a Belgian street artist from Ghent who specializes in painting giant black and white animals on the side of buildings. His contribution to Bangkok
here is a pair of immense elephants caught seemingly suspended in the air. The Romanian artist Aitch, who makes bright, heavily patterned floral designs, has a huge wall decked out in pink, with tigers, flowers, and other striking vivid imagery here. 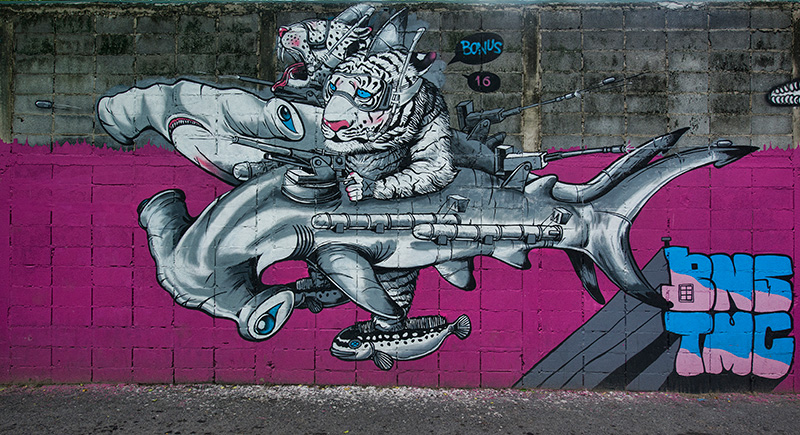 If you keep your eyes open as you travel around Bangkok these days, you’ll discover more and more street art and graffiti that transcends the traditional writing on the wall. It’s getting prevalent and interesting enough that soon we ought to be seeing street art tours and having guidebooks written about all the best spots in town to check out, which is a great boon to a city that was about as black and white as they come when it came to being artistic. All of that art is also just another excuse to get off the couch, wander a bit, eat some great street food, and explore parts of Bangkok you’ve never seen.