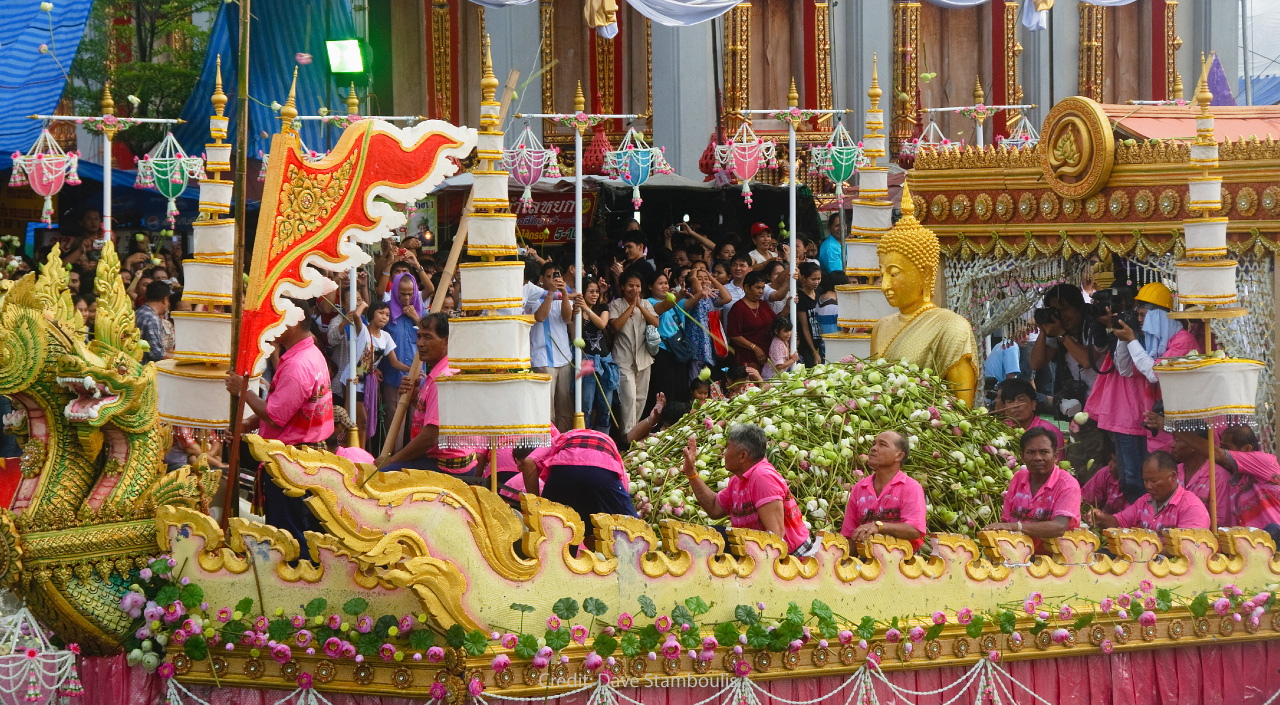 Many folks tend to turn away when they hear the term “religious celebration,” thinking of some somber and drawn out affair that is especially tedious if one isn’t a disciple or believer. Yet Thailand is home to this rare mix of the faith and fun. Awk Phansa, also known as “The end of the Buddhist Rains Retreat,” celebrates the end of the three month Buddhist Lent period which this year falls on Oct 24.

The holiday is celebrated on the full moon day of the eleventh lunar month, when monks come out of their meditation retreats, coinciding with the end of the rainy season. However, a few seemingly wild and wacky festivals near Bangkok accompany the rituals here, and offer a great chance to see some unique Thai cultural tidbits as well as have a blast.

Legend has it that a group of monks traveled during the wet season and damaged plantations as they trod through during their alms march. Thus the Buddha forbade travel during this time and recommended that monks stay in one place. Even from a city-dweller’s point of view, this makes perfect sense. Who wants to go out even to get som tam on the corner when your soi is knee deep in water?

Buddhist Lent is a time for meditating and giving up material things or addictions. Some people stop eating meat, drinking alcohol, or smoking, and for the monks, it is a time to retreat to their temples and spend hours meditating. At the end of the three month period, the monks come out of hibernation and go back into the world. In Thailand, it’s a popular time for Thai men to spend a short time being a monk, and ceremonies called thod kathin take place during this time, during which new robes and offerings are made to the monks.

Also taking place throughout Thailand during this period is the long boat races, part of the celebrations of getting outdoors again, as well as being hopefully blessed with abundant water for a bountiful harvest. But near Bangkok, there are a few festivals highly worth checking out.

The first is Rap Bua, known in English as the “lotus throwing” festival. Found throughout temples and related to heavenly beings in Thai literature, the country’s most important flower is honored at the Wat Bang Phli temple in Samut Prakan province, where a boat carrying a figure of the famed Buddha image “Luang Phor Toh” sails down the Samrong Canal.

While this may sound devout, the reality is far more bizarre. Thousands of revelers line the banks of the canal just after dawn, and while “rap bua” technically means “lotus receiving,” what goes on instead is a hysterical free for all, with people flinging flowers at the boat, the Buddha image, and all the other floats, parade boats, and anyone who is misfortunate enough to be manning them.

Locals also throw flowers at visitors as a way of welcoming them to join in the merit-making event, and the entire event somewhat resembles the Songkran water fights, only here you’re more apt to get hit by a bouquet rather than a cold spray!

By the end of the morning, people are lined up five rows deep armed with flowers, all trying to outdo one another for distance and direct hits, and the main boat with the Buddha image is completely buried in lotus petals, with the management committee heading the boat covered in flowers. 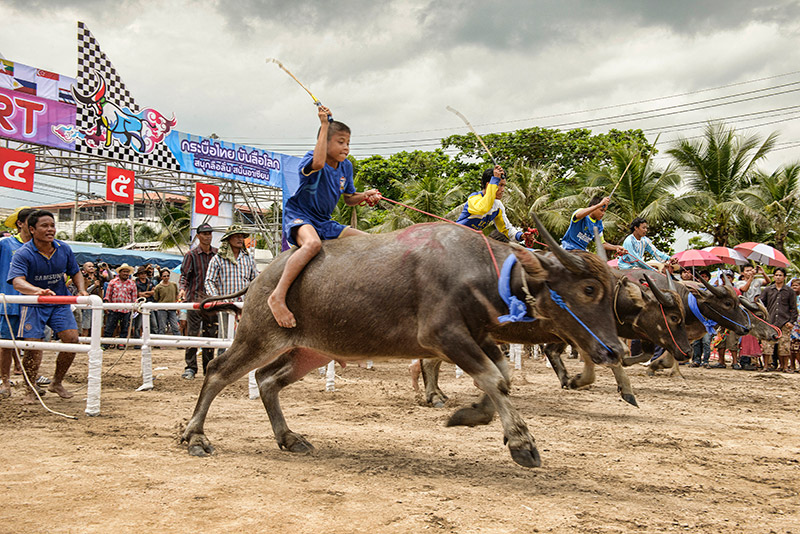 Meanwhile, just down the road in Chonburi province, another unique Awk Phansa event takes place just hours after Rap Bua finishes. The Chonburi Buffalo Races have origins that go back a century, and tie into the end of Buddhist Lent in that farmers wanted to give thanks for a successful crop after the rains, and of course their irrigated fertile crops had been aided by their water buffaloes, so they started a festival paying homage to the beasts of burden.

Farmers bring in hordes of buffaloes from the countryside in the morning, with the main event of the day being the 100 meter buffalo dash (or should we say gallop?), when the animals compete for some hefty prize money.

The buffaloes actually can get a real burst of speed once they take off and are headed in a straight direction, and there really are some exciting and epic finishes between several riders. The hardest part of the race seems to be getting the jockey aboard the beast without being thrown over, and then getting the pair out of the starting blocks facing straight ahead at the start of the race.

The buffalo has been the subject of many reports over the past few years as to how they are slowly becoming extinct in Thai society. Motorized tractors and other technologies have replaced them in the fields, and their bodies used as meat in an expanding carnivore trade.

Hopefully festivals like this can keep the spotlight on the animals and how valuable their contribution has been to Thai society, while giving folks a chance to go out and have a fun day at the races as well.

Awk Phansa will fall on Oct 24 this year, but Oct 23 will also be a public holiday – Chulalongkorn Day – so hope the working public can get out and have some fun!