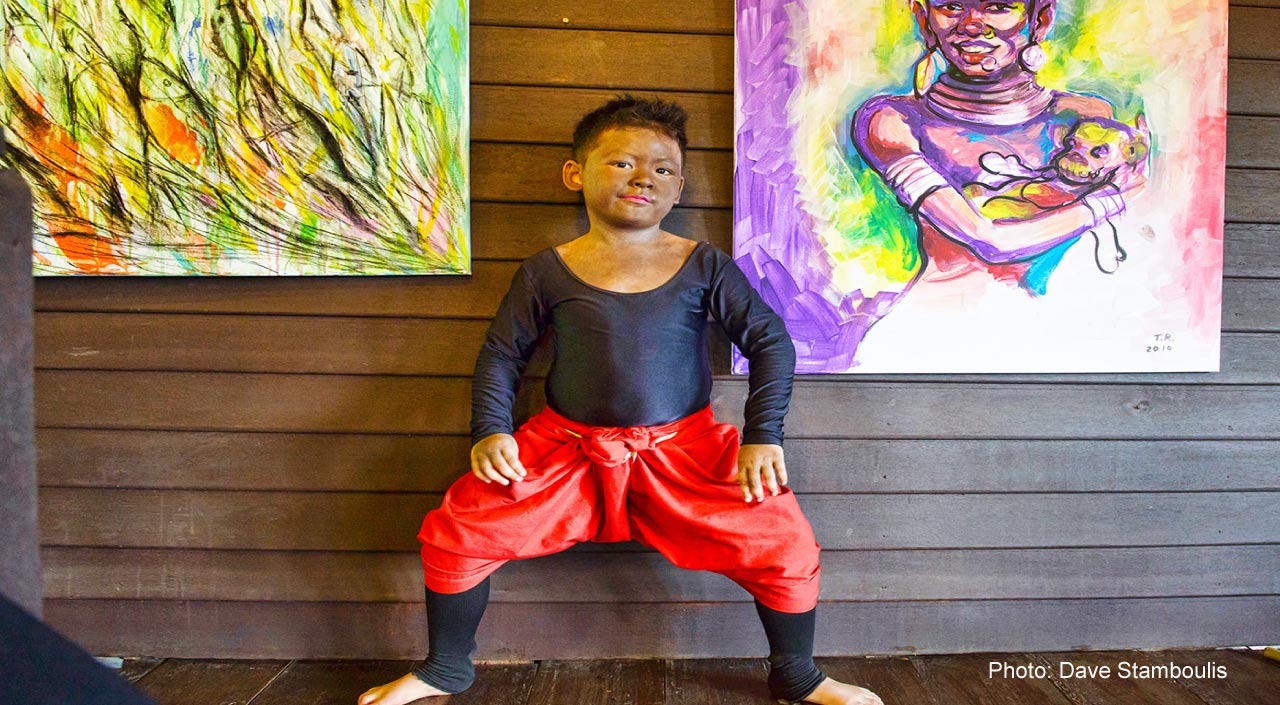 Bangkok recently staged a World Puppet Carnival with over 100 productions from 70 countries bringing the age old art of puppetry to town. It was nice to see the revival of a tradition passed down from generation to generation and sometimes seen as a disappearing art due to the onslaught of video games and electronic devices. It reminded me of one of Bangkok’s lesser known attractions and one that is to be commended for its efforts in keeping old Bangkok culture alive, that of the Baan Silapin Artist’s House in Thonburi and its excellent traditional puppet shows. 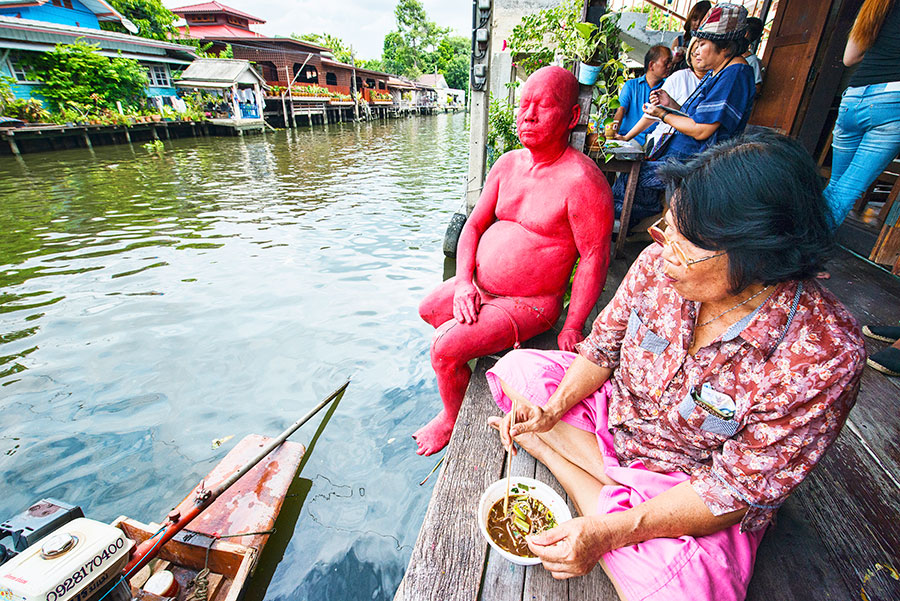 Klong Bang Luang is one of those sleepy wooden slats over the water communities that used to be the norm of Bangkok life and now engulfed by high rises, malls, and sprawling concrete. The wooden shophouses here have been around forever, with the owners usually found sitting out front, watching the canal flow languidly past. More recently longtail boat tours of the canals of Bangkok have sped past here as part of their itinerary, but now they are stopping, due to the recognition of Baan Silapin.

Baan Silapin, better known as the Artist’s House is owned by Chumpol Akkapantanon, a painter who bought and restored several 200 year old wooden houses along the canal. As he says, “much of Bangkok has been destroyed by development, but life on the canal inspires a more simple way of living and shows off how the city used to be.”

In addition to restoring the beautiful old wooden home, Akkapantanon turned it into a local art center, as well as a coffee house, where aspiring artists could hang out, learn, and create. The local community got behind the project as well, deciding that creative arts could keep its young people away from trouble and keep the tradition of local performing arts alive by teaching Thai puppetry and getting the young folks to become performers and pass on the lineage. Another artist friend, Supasit Wongrom-ngern, moved into the neighbourhood, rented a shophouse, and started teaching painting and making woodcuts. 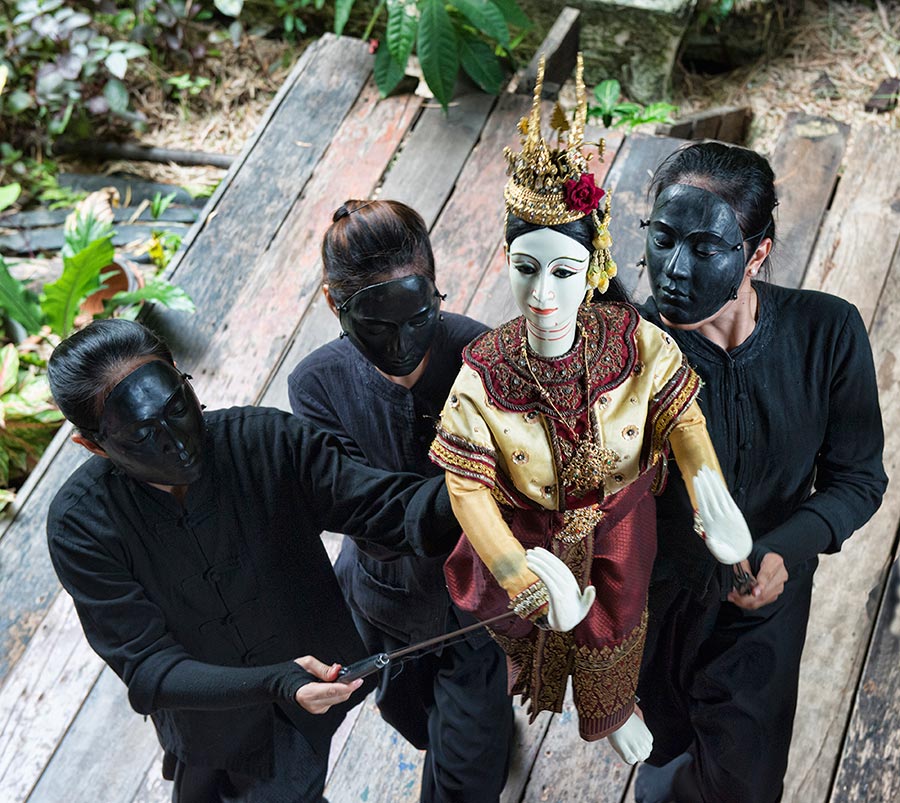 The traditional Thai puppet shows here are performed almost daily, now attracting crowds of mostly urban Thais on the weekends coming out to play tourist along the atmospheric canal, although foreign visitors are also making their way here as well. Puppeteers dressed in black with black masks so as not to draw attention to themselves control the strings of lifelike marionette puppets, enacting Thai folktales and scenes from the Ramayana. The star of the show is usually the Hanuman monkey god puppet, who is always up to mischievous deeds, and true to Thai comedy, there is plenty of bawdry joking and audience interaction/participation with the puppeteers. 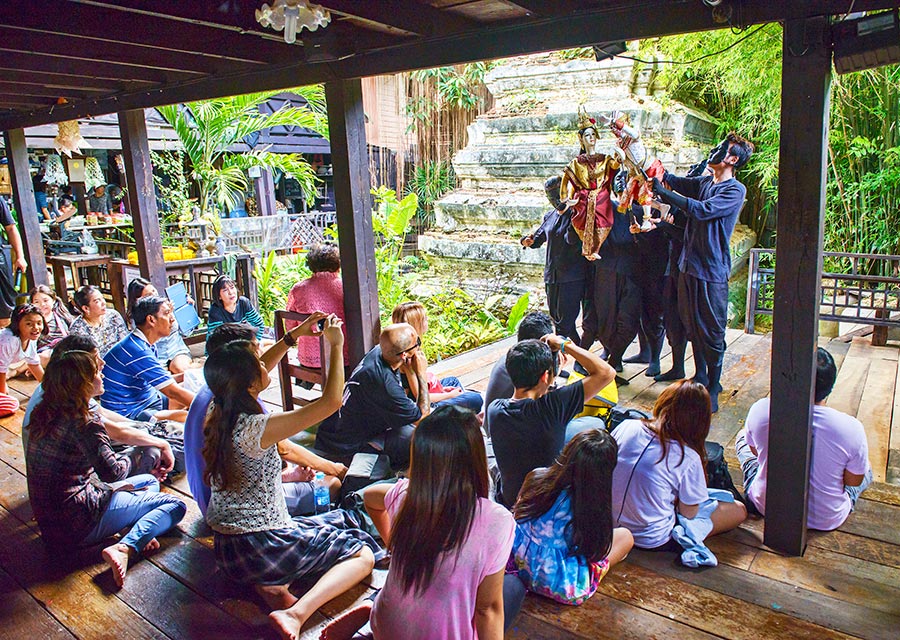 The stage inside the house sits in front of an abandoned Buddhist temple, which makes the performance all the more atmospheric. You can sit downstairs, but it’s also possible to wander upstairs where there is an art gallery full of paintings for sale, where you can peer over the balcony and get a great vantage point over the puppets and performers. As opposed to seeing expensive National Theatre renditions of Thai puppetry, or dealing with the crowds at the more than touristy Joe Louis Puppet Theatre, here you can watch the performers making the black plaster masks, rehearsing the katas (mantras) used in the shows, and best of all seeing the young troupes of kids who are involved in the theatre learning about dramatic art and hamming it up whenever they can.

Thai theatrical puppetry, known as hun lakhon lek, has been around since the reign of Rama VI, and is really the only form of ancient puppetry (there used to be four) that is still performed today. The same attention to graceful manipulation of the puppets is still adhered to, with three performers needed to make the pulleys and levers on each puppet work smoothly. Men control the monkey and demon puppets, whereas women control the heroes and heroines.

While the puppet show is the main attraction, the Artist’s House and Klong Bang Luang are attractions worth the trip alone. Local residents now hawk food and souvenir items along the wooden walkway, there are some tea and coffee shops, and in Baan Silapin, there are plenty of creative works available as gifts, along with a small eatery selling meals and snacks. For most visitors, it will be a side of Bangkok they have never seen, not to mention that the puppet show, which is free by the way (although donations are highly encouraged), deserves support so that this Thai tradition does not become a relic of the past.

The best way to get to Baan Silapin is to take the BTS to Bang Wa (last stop) and grab a taxi the rest of the way (tell the drivers Talad Nam Klong Bang Luang or Baan Silapin or Wat Kuhasawan, they ought to know at least one of these.