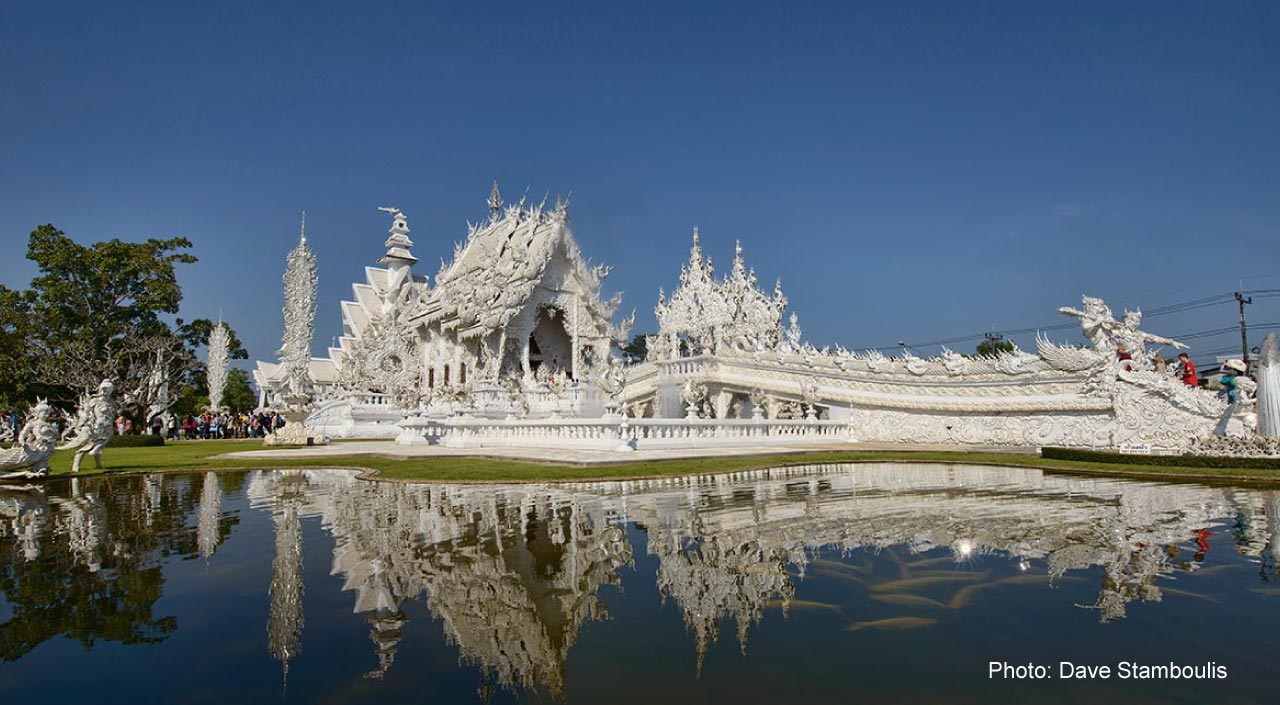 Chiang Rai is one of Thailand’s sleepier cities, more noted for being a gateway to the northern mountain scenery, hill tribe trekking, and escapes to Myanmar or Laos. Yet, it has a couple of sights that are amongst the most striking in Thailand: the magnificent Wat Rong Khun temple and its more unknown counterpart, the Black House.

While a lot of travellers will run the minute you mention the words “temple tourism,” these two gems in Chiang Rai are well worth a visit and are actually somewhat related. Known as the heaven and hell of architecture, Wat Rong Khun, also called the White Temple, and Baan Dam, or the Black House, were actually sculpted by two artists coming from the same school of thought, as the white wat is a project designed by an artist whose teacher built the black one! 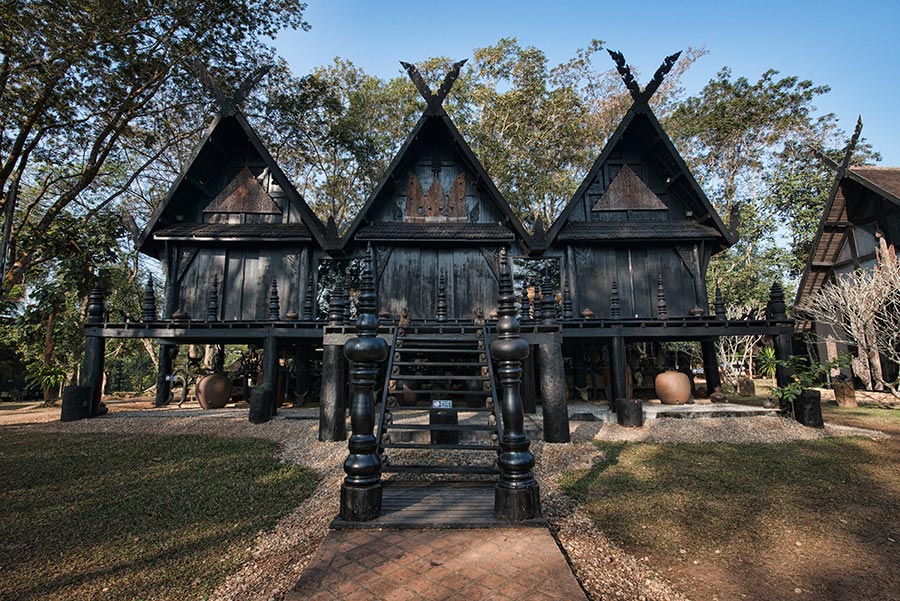 Thawan Duchanee was one of Thailand’s legendary art masters. He passed away last year at the age of 74 and was considered a pioneer of avant garde Thai art. Duchanee studied under famed artist Silpa Bhirasri (also known as Corrado Feroci), an Italian who came to teach art in Thailand in the 1920s, took Thai citizenship, founded Silpakorn University, and was considered the father of modern Thai art. Duchanee spent a decade in Europe perfecting his craft (even spending three years to paint murals on the ceiling of a German palace) and then returned to Thailand and began doing creative interpretations of traditional Buddhist art, taking influences from Tibetan, Burmese, and Lanna northern art, and creating phantasmagoric scenes of Buddhas, demons, and beasts in a metaphysical cosmology.

The Black House is a series of architectural art projects that Duchanee devoted his life to, and the quiet grounds, some 8 kilometers north of town, are filled with a variety of his temple structures, mostly made of intricately carved dark wood, which are surrounded and filled with bizarre sculptures, statues, and other artwork, with plenty of macabre additions like dead animal skulls and skins being incorporated into the building furnishings. 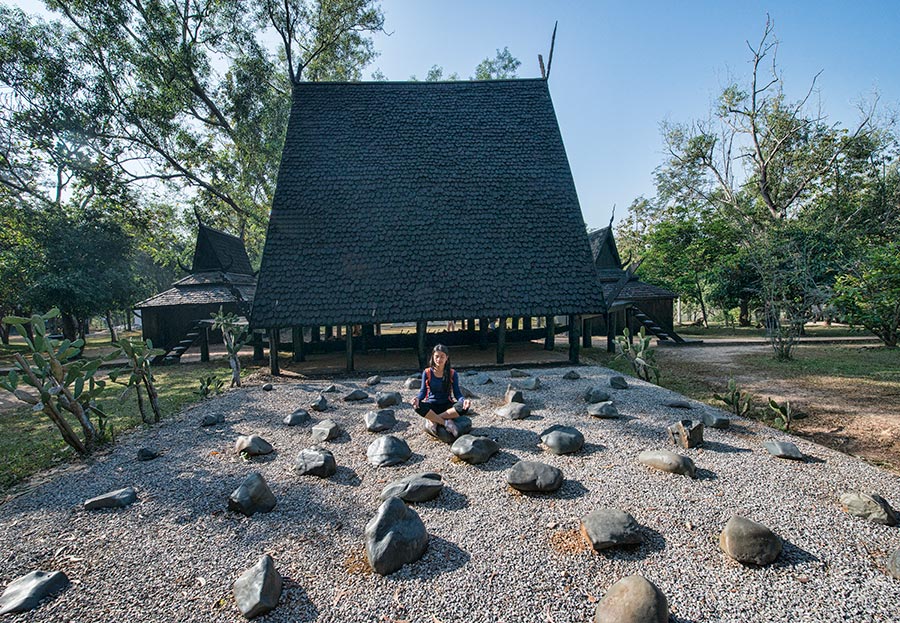 While many of the buildings (which range from space-like domes to triangular shingle houses to one building that even resembles a submarine) cannot be entered, some of the larger temple-like complexes are open, and feature bone carvings, long snake skins, buffalo skulls, and antlers along with other occult-styled furniture that wouldn’t be too out of place in an Addams Family film or Disneyland’s Haunted Mansion/Mystic Manor. Needless to say, taxidermists will love this place.

Duchanee was the mentor, teacher, and idol of Chalermchai Kositpipat, another of Thailand’s top artists, and Kositpipat has his greatest opus on the south side of Chiang Rai. Wat Rong Khun is an ongoing project meant to symbolize heaven on earth, with its gleaming white color everywhere standing for purity and shining brightness. Kositpipat started his career painting movie ads on billboards and became a controversial figure for a time mixing contemporary images with Buddhist temple art, but today is one of the country’s most revered artists. These days, thousands of visitors flock daily to Wat Rong Khun, which is a visual masterpiece.

Kositpipat has spent over 40 million baht of his own money to refurbish what was a decrepit, in disrepair local wat to what is now a stunning visual portrayal of classic Buddhist doctrine (human desire causes suffering, that is, money, materialism, greed, and passion) spiced up with lots of contemporary musings. The inner ubosot main building, where visitors may not take photos, is filled with bizarre murals featuring terror and nuclear attacks and images of Freddy Kruger and the Terminator. To get into this complex, one must cross a bridge of rebirth, under which lie thousands of white hands all reaching out from the underworld and meant to depict human desire.

While the temple resembles a rather surreal religious museum, it actually is far more than just a Gaudi-esque tourist attraction, as thousands of Thais come here to make merit and pay tribute to the message that Kositpipat is trying to send out. 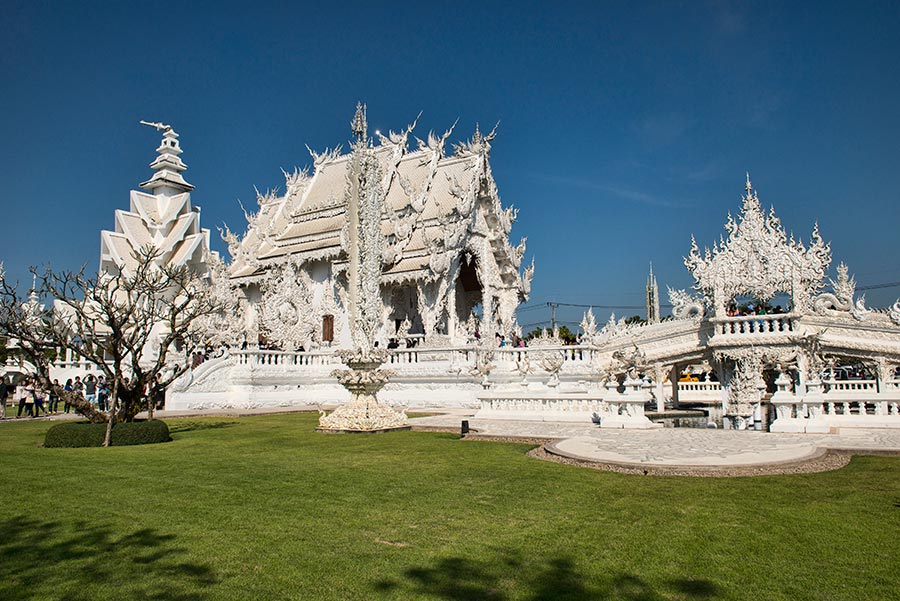 Wat Rong Khun was heavily damaged in the earthquake of 2014, and at the time, Kositpipat said he would demolish the entire structure. However, scientists found that there really was not any major structural damage, and this caused Kositpipat to do a full turn and declare that he would spend the rest of his life working on the temple. One of the chedi spires still hangs off the top, looking like it is about to fall off, but other than this, much of the white wat looks as glorious as ever.

What is about as amazing as the architecture of these two stunning complexes is the fact that they are both completely and totally free! In a country where foreign visitors are often charged ten times the local price and where beautiful renowned temples are now charging whopping fees (Wat Phra Kaew and the Grand Palace in Bangkok or the temple recreation park of Muang Boran in Samut Prakan being two of the most notorious examples), these two gems, which I find to be possibly the most beautiful and innovative human-made tourist attractions in the country, are completely fee-less and most welcoming to the public.

While Wat Rong Khun does get thronged with tour groups and can be a real zoo, Baan Dam is far lesser known, mainly popular with Thais, and the grounds are a meditative and reflective spot. Both of them are highly worthy of a pilgrimage, and a great reason to spend an extra day or two next time you’re in Chiang Rai.