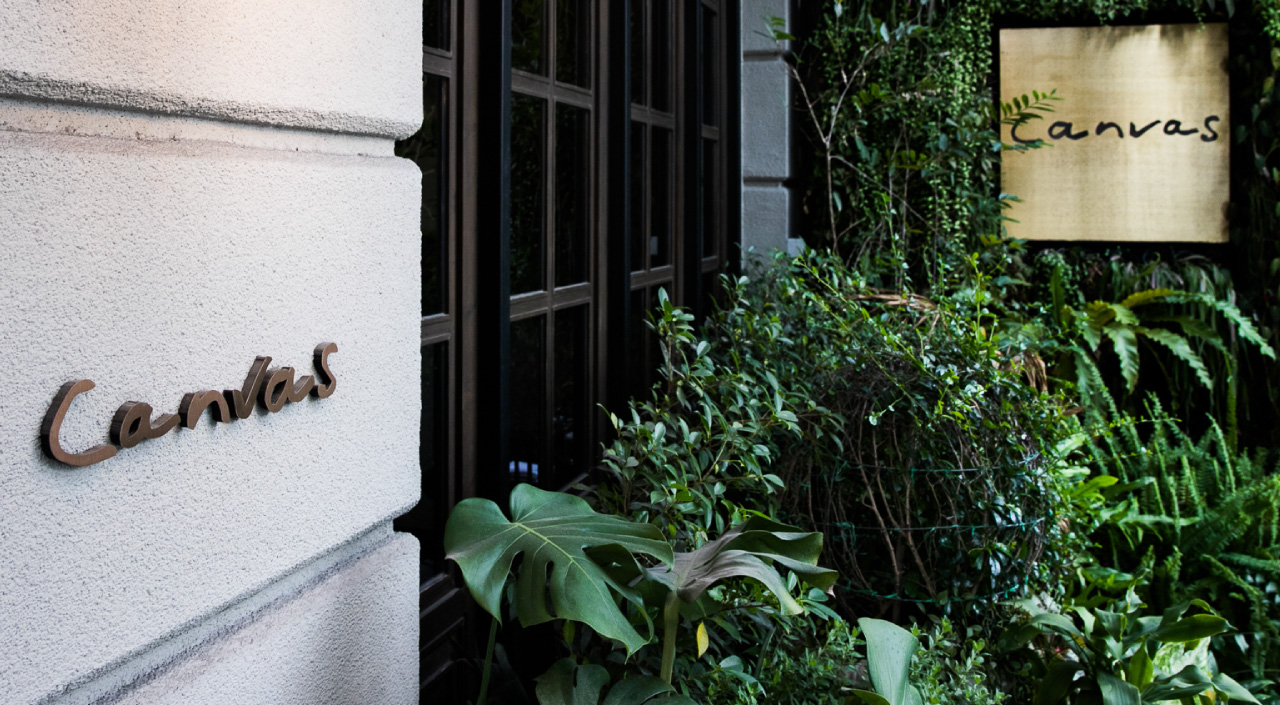 Canvas – Food for the Palette

Perhaps there is a reason why “palate” and “palette” sound the same. At the recently Michelin star-awarded Canvas, an artist’s touch is on display, and your taste buds are certain to be stimulated on all fronts. Chef Riley Sanders is the driving force behind the restaurant, which received one star from Michelin in their second edition of the Bangkok guide, and it offers one of Bangkok’s most creative and innovative takes on Thai cuisine, serving up six and nine-course tasting menus that ought to have visiting and local foodies lining up for months to come. 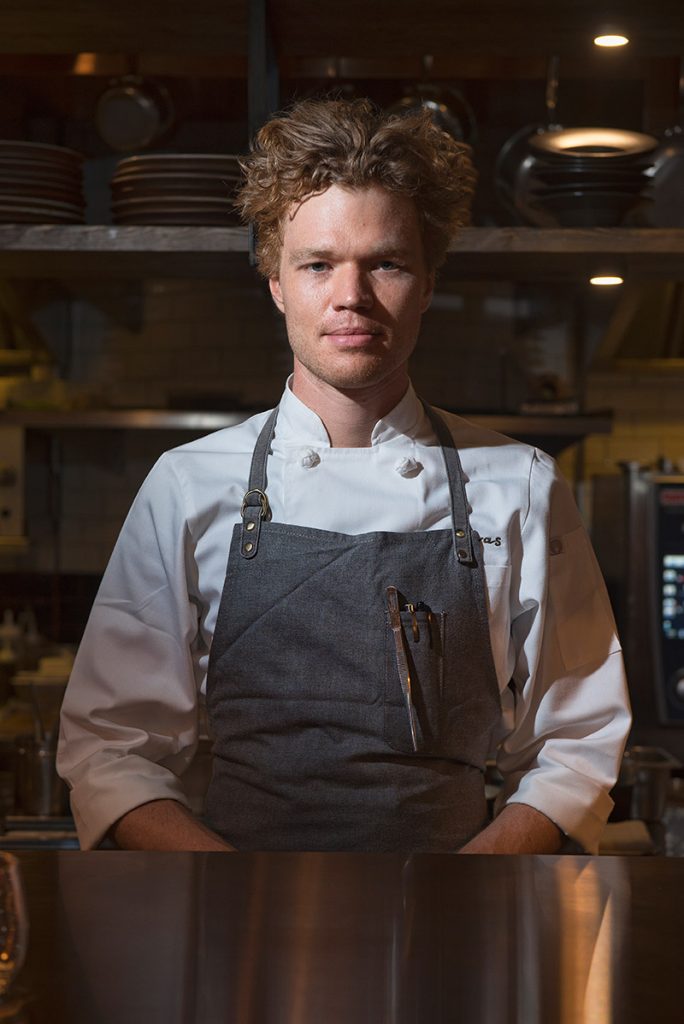 Perhaps there is a reason why “palate” and “palette” sound the same. At the recently Michelin star-awarded Canvas, an artist’s touch is on display, and your taste buds are certain to be stimulated on all fronts. Chef Riley Sanders is the driving force behind the restaurant, which received one star from Michelin in their second edition of the Bangkok guide, and it offers
one of Bangkok’s most creative and innovative takes on Thai cuisine, serving up six and nine-course tasting menus that ought to have visiting and local foodies lining up for months to come.

Not only did Sanders get to perfect his craft, but his schedule and savings from the yacht afforded him time to travel the world, and he embarked on several years of world wandering, giving him the opportunity to explore markets, street food, fine dining establishments, and a plethora of different global cuisines.

He came to Bangkok several times during his travels, and it always struck him as a very vibrant and livable city, and most certainly one where food was king. He got involved with the people running the Rabbit Hole bar, started making tapas bar snacks for them, and evidently shared some common visions, as he got a team of investors interested in backing the opening of Canvas. 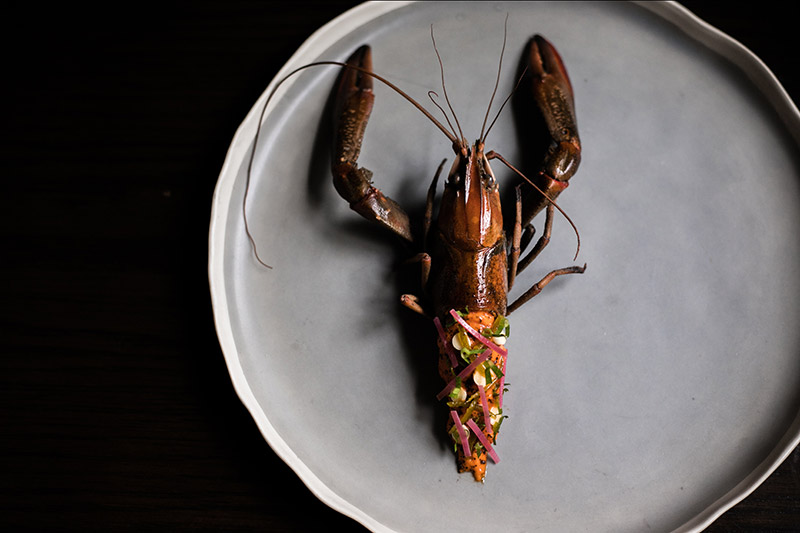 Sanders has focused on locally sourced Thai ingredients, highlighting the ones that have surprised him the most and turning them into sublime creations of Thai favorites that have been given an international twist using progressive culinary methods. Take his toasted rice bread, made with organic rice from Surin province and served with a brown butter and yellow chili emulsion, topped with salted egg yolk and toasted sticky rice. Light, flavor-packed, and so balanced in tastes, you’d wish you had a loaf to take home. Chef Riley says the idea behind it was to offer the Thai staple, rice, in a Western staple form, bread. 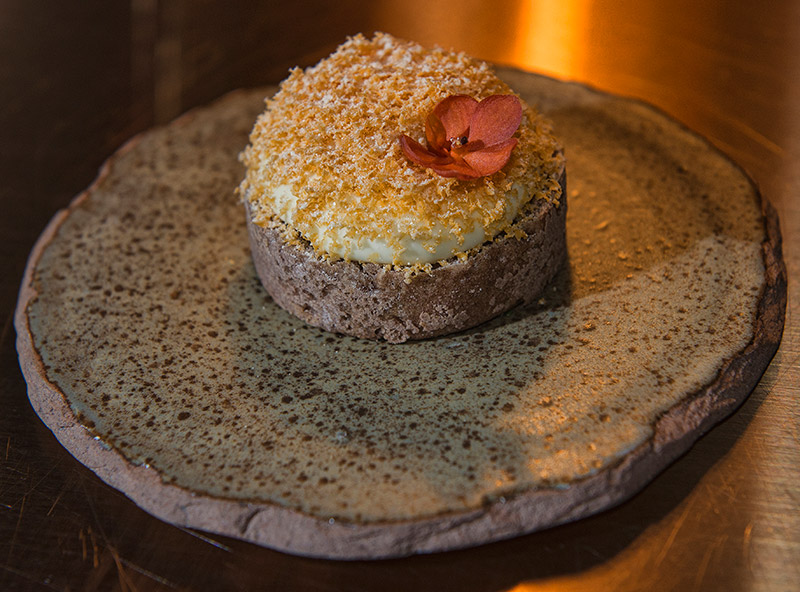 This mélange of food cultures comes out best in the next dish served, soy-smoked king mackerel prepared sous vide and served with an orgasmic paste made of ant eggs, dill, and horseradish. Sanders was inspired by Western “surf n’ turf” menus, only here turning the mackerel into the sea combined with one of Thailand’s unique inland ingredients, the ant eggs.

Interestingly enough, the staff at Canvas come to you prior to serving to ask if you have any allergies or if you don’t want to try certain things (ant eggs being one that many foreigners might have a few trepidations about). I asked Sanders about this and if some of the stranger Thai ingredients being served in a Michelin-starred restaurant might be a problem, but he merely shrugged and said, “I like to have a few things on the menu that are a bit challenging and push the boundaries a little.” 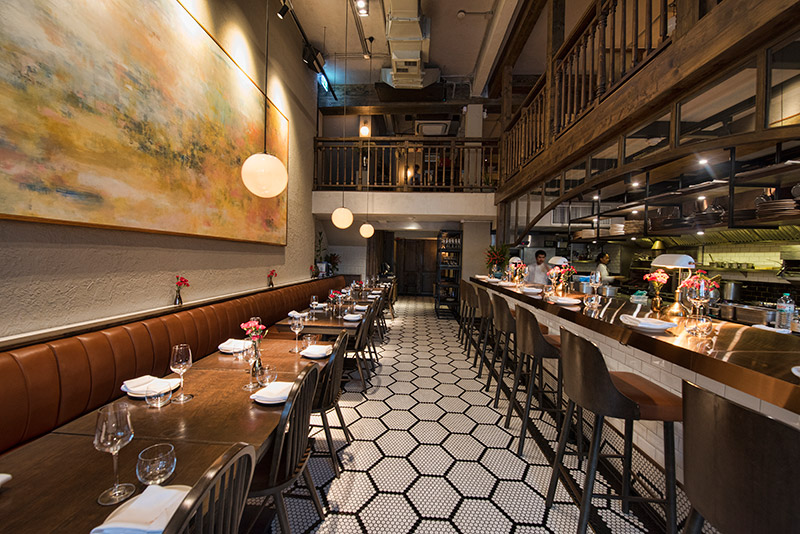 The devotion to unique and locally sourced ingredients and the stories behind them are the essence of Canvas, and while the relaxed bistro décor might make you want to chill out at one of the hardwood tables that sit under a giant impressionist canvas, it’s best to opt for a counter seat in front of the open kitchen, not only to watch Chef Sanders and his team in action, paying astute attention to the tiniest details, but also to get his detailed explanations of each dish as it arrives. 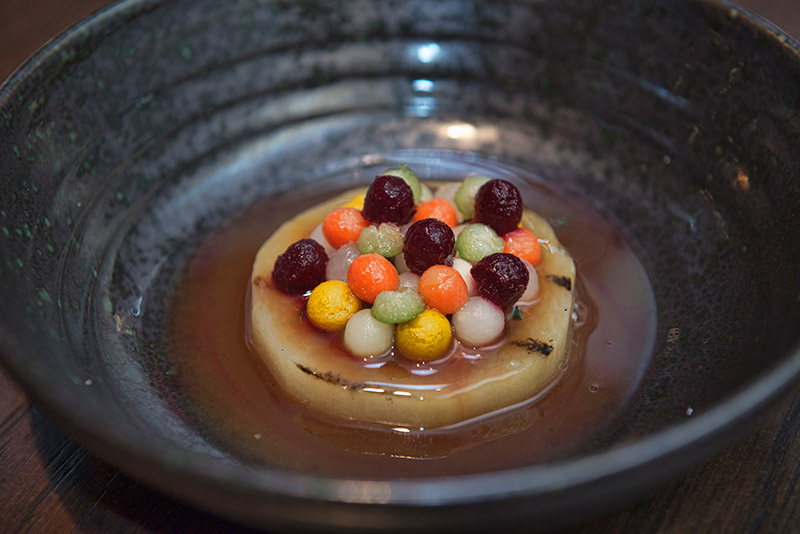 It is one thing to taste a divine piece of frog, cooked with sticky rice, finger root, and holy basil, but another to learn that the frog comes from a farm in Khao Yai, or that the edible flowers served with the dish are from a source in Samut Prakan, or that finger root (krachai in Thai) is related to galangal, but has a completely unique taste. It’s here that Sanders knowledge of Thai ingredients, how to use them, and how to experiment and create astounding, novel dishes with them really shines.

Make sure to save room for dessert, because the creations served here are as good as any of the predecessors. We arrived just as gooseberries came into season and were served several tart ones put over a sorbet and drizzled with stingless bee honey from Chanthaburi, probably the most aromatic and flavorful honey I have ever tasted.

At the end of the night, I felt dazzled along with being well sated. Taking a blank canvas and turning it into a gastronomic fantasy, Chef Sanders is most certainly living the life of Riley these days, and is showcasing Thai ingredients and the wonderful cuisine here like few others.