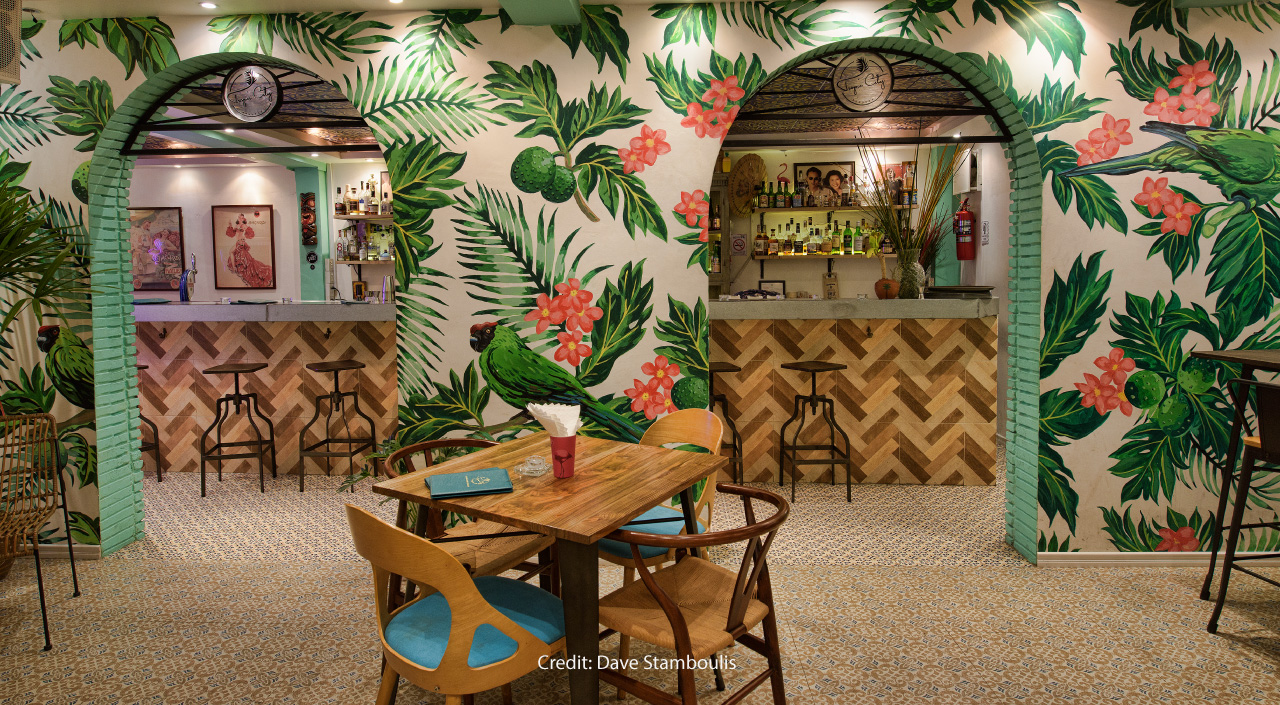 Over the past decade or so, Bangkok has become one of Southeast Asia’s premier destinations for those interested in a tipple. From theme bars to some of the best mixologists, you’re never going to go thirsty in this city. Yet, for all its great watering holes, it’s challenging to find one that offers everything – from great drinks to music to atmosphere. But Tropic City bucks this trend, delivering a punch on all fronts. 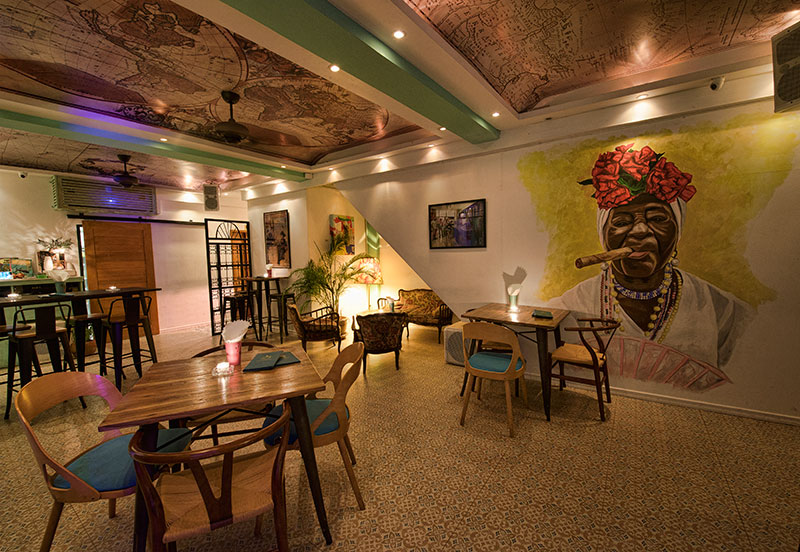 Themed as an inviting Polynesian tiki bar, Tropic City welcomes its patrons into a beautiful old house with parrots and flowers adorning brightly painted walls, a captivating wall painting of an old woman smoking a cigar, vintage furnishings, and Portuguese tiled floors. You can lounge in the main space, which feels like a comfy family living room, make a nest at the mood-lit bar counter to watch all the goings-on, or else bask in the candlelight at a patio table. Afro beats, soul, disco tunes, and house music throb from the DJ’s mix-desk for a wickedly relaxed vibe – which is just what you need to appreciate the drinks here.

Tropic City is the dream come true for Swedish bartenders Sebastian De La Cruz and Philip Stefanescu, who earned a name for themselves crafting superb cocktails at Thonglor bars U.N.C.L.E. and Touche Hombre. Realizing the City of Angels was missing a proper tropical rum-based joint, the duo decided to open a place of their own.

Though captivated by Polynesian culture, De La Cruz points out that Tropic City is not a bona-fide tiki bar (“Tiki bars have rules and we didn’t want rules”). But it does pay fulsome homage to tiki cocktails, with enough spice-infused rum and fresh juices laced with lip-smacking syrups to wow the most discerning drinker. 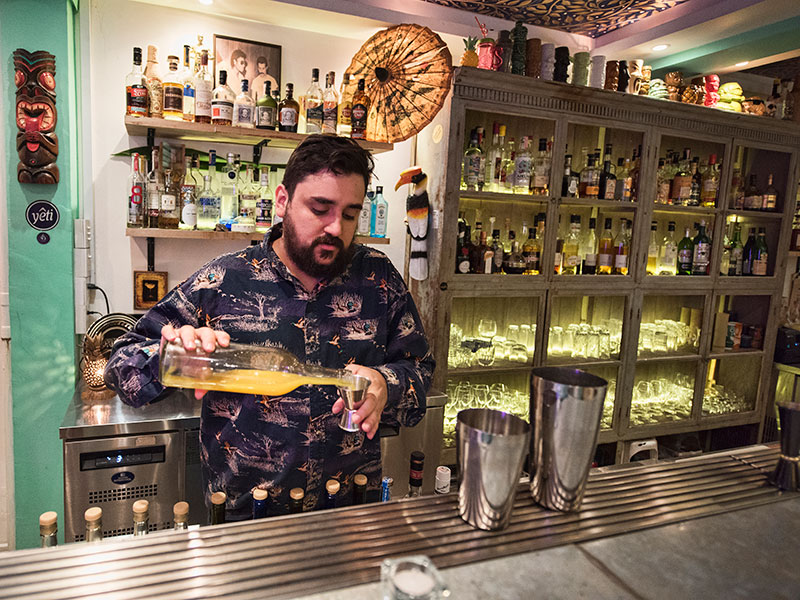 Tiki culture first came to the world’s attention when American servicemen returned from WWII with memories and mementos from the South Pacific. In Hollywood, a fellow by the name of Donn Beach started mixing juices and syrups with rum in his tropics themed “Don the Beachcomber” restaurant, attracting legends like Frank Sinatra and Howard Hughes to indulge in creative Zombie and Mai Tai drinks. This was followed by the opening of Trader Vic’s, which brought Polynesian-themed dining and drinking to the masses.

Though restaurants and bars have remained, much of the culture has been lost as signature recipes were copied and stolen, and purveyors of fine drinks began jealously guarding their secret recipes. However, tiki culture has enjoyed a resurgence over the past decade, with more young bartenders developing an appreciation for the unique drinks and wealth of mixology knowledge held by the old tiki masters.

De La Cruz and Stefanescu continue the tradition, and to witness them at work and taste the results is akin to watching master magicians. Take the deceptively simple Tropicopop milk punch, a clear drink that looks about as tropical as a glass of water. In fact, it is one of Tropic City’s most enticing concoctions, a blend of two rums – Bacardi Carta Blanca rum and Diplomatico Planas – with lychee, lemon, coconut water, and believe-it-or-not goat’s milk, all of which yield one taste-bud tantalizing elixir. 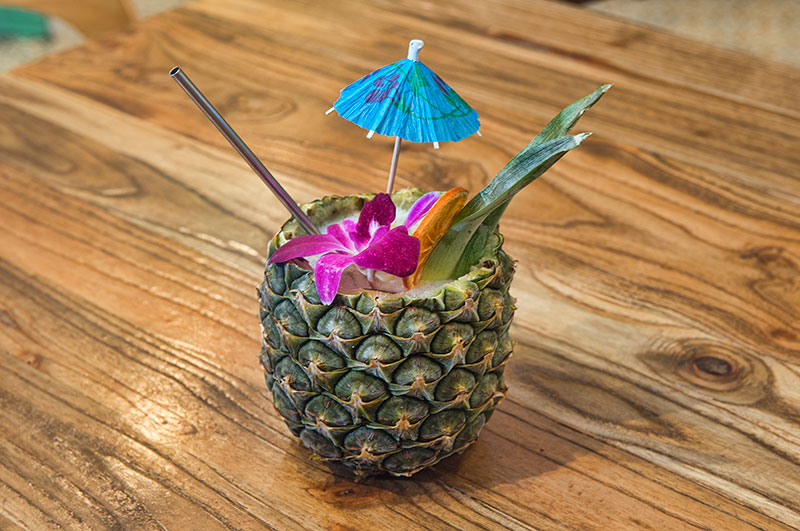 Then there is the wildly popular Welcome to the Jungle, the most ordered drink at Tropic City and indeed an ode to tiki and tropical. Plantation Dark and Carta Blanca rum are mixed with apricot, pineapple, orange, the allspice scented Pimento Dram liqueur, and vanilla, all poured into a carved-out pineapple, fitted with a paper beach umbrella and sipped through a straw. 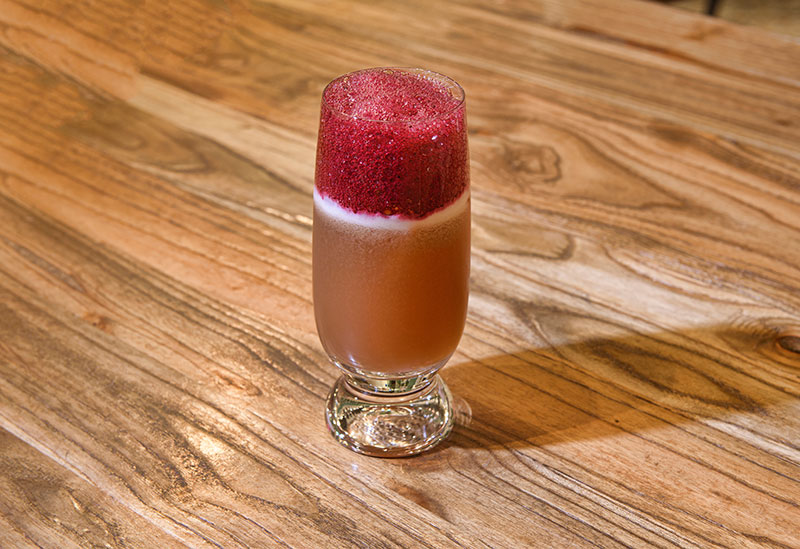 Gin and vodka lovers need not despair. The Skywalker again shows off the artistry of the mixologists, combining the horsepower of bark-infused vodka with Falernum cordial (a tropical drink staple, made from a citrus, spice, and sugar infusion), the herbal allspice liqueur Pimento Dram, honey, lime, pineapple, all topped off with beetroot foam, a touch courtesy of the bartenders’ Swedish roots.

Fruits, vegetables, spices and herbs appear to be fair game at Tropic City. Bombay Sapphire gin is infused with Thai parsley, tequila is flavored with charred red bell peppers, and friends can even get “cocktail flasks”, meant for sharing between three to six people.

You’re also in good hands when it comes to nibbles. The Michelin Plate-awarded 80/20, located just down the street, initially wanted to use this space for a smokehouse, but decided to set up Tropic City when the residents objected.

So now, they serve up tapas-size bites at Tropic City, offered in an ever-changing menu. The night we showed up, the offerings included Chinese bao dumplings and the Canadian Quebecois favorite, poutine – French fries topped with cheese and gravy.

For all the Thonglor crowd, it’s well worth making the trek across town to get here – it’s actually just a 10-minute walk from Hualamphong MRT station. As De La Cruz jokes, “We’re the perfect stop for anyone wanting to do a bar crawl from Chinatown to Silom.”

Head over here on the next steamy Bangkok evening, you’ll quickly find yourself most refreshed. 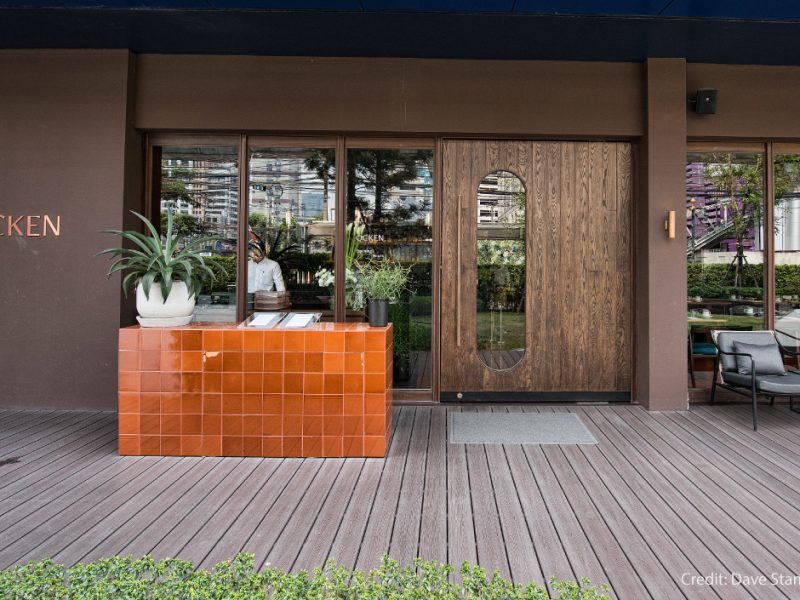