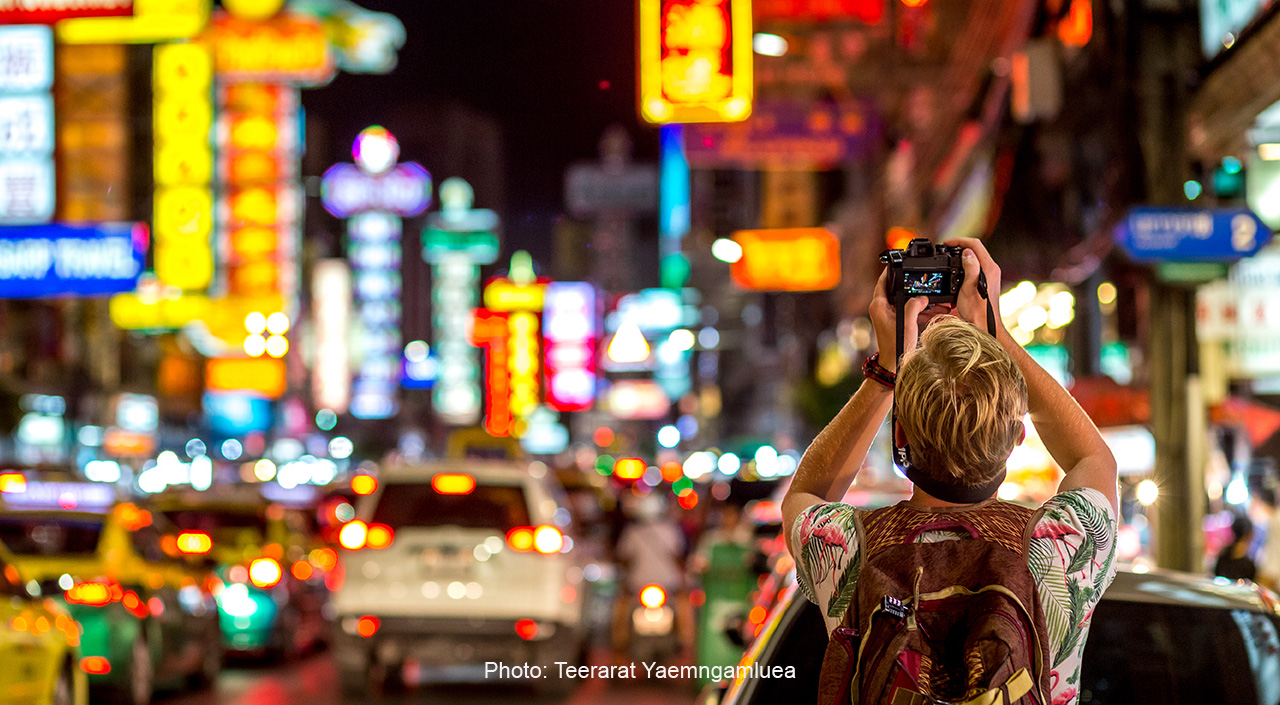 Yaowarat: The Soul of Chinatown

The changes are coming to Yaowarat, Bangkok’s Chinatown, so better get there soon. Then again, the opening of the MRT subway line into one of the last vestiges of old Bangkok will probably encourage more of us to make the long journey from places like Thonglor and Ekamai. I don’t get there enough, despite my love of the narrow old alleys full of rusted auto parts, funky street eateries, and new retro bars and cafés; it’s just too far to deal with the traffic. Yet when I do make the trip, I’m reminded of just why I enjoy Bangkok so much. 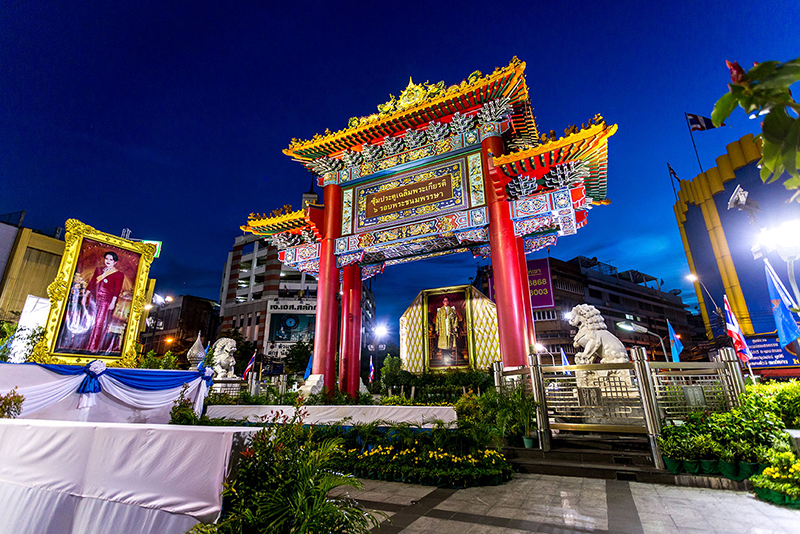 Until the MRT heads right into the heart of Charoenkrung, your nearest access point by public transit remains Hualamphong, which you probably want to pay respects to now as well, as Bangkok’s main railway station is to be turned into a rail museum, as a new central terminal is being built up at Bang Sue. From here, it’s a short walk down to Wat Traimit and the Chinatown Gate, entry into the heart of Yaowarat. 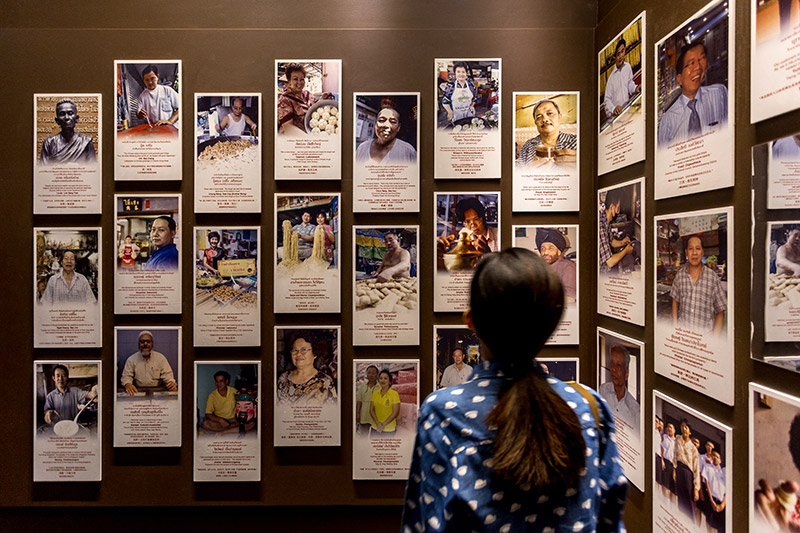 If you haven’t already been, it’s well worth the visit to check out the Yaowarat Chinatown Heritage Center, located at Wat Traimit. The small museum has been extremely well planned, and follows the migration of Chinese immigrants to the present day Thai-Chinese, showing all the hardships that the early migrants had to face, featuring a mix of fascinating old photos with a series of life-size models and replicas. 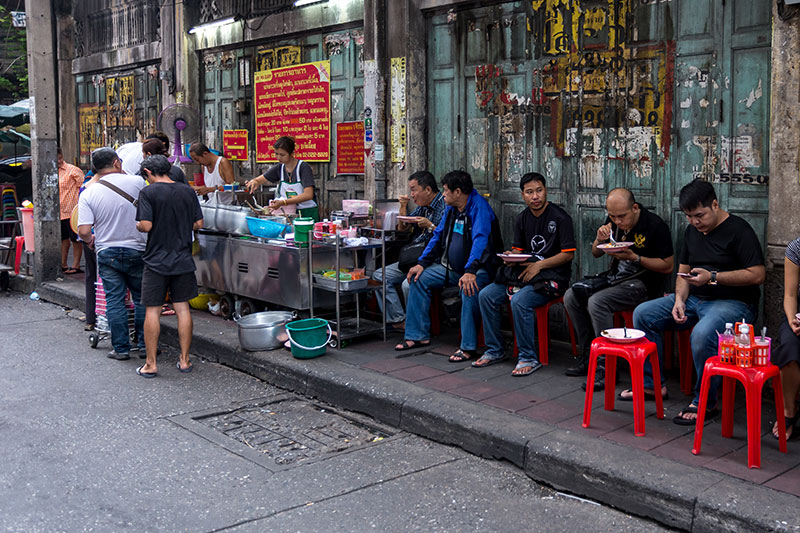 While the impressive temples and shrines along with all the neon lights at night make for some nifty photos, face it, you’ve come all this way across town for something else; that being to eat and drink. In terms of unique street eats, the area around Yaowarat is pretty unrivalled. I’m not a supporter of bird’s nest and shark fin, so I usually skip all those places, and if I’m in Chinatown early enough, I make a beeline for Khao Raat Gaeng Jek Pui. More popularly known as “musical chairs rice and curry”, this street stall is some 75 years old, and is tucked into an alleyway against a wall of faded shophouse doors and old posters. The curries served at lunch here are the reason why people line up down the block and deal with the fact that there are no tables to eat at. The stall is known by the musical chairs moniker because there are only stools to sit on, and the minute someone gets up from one, his seat will be immediately snatched by someone else. By late afternoon, almost all the food is sold out. 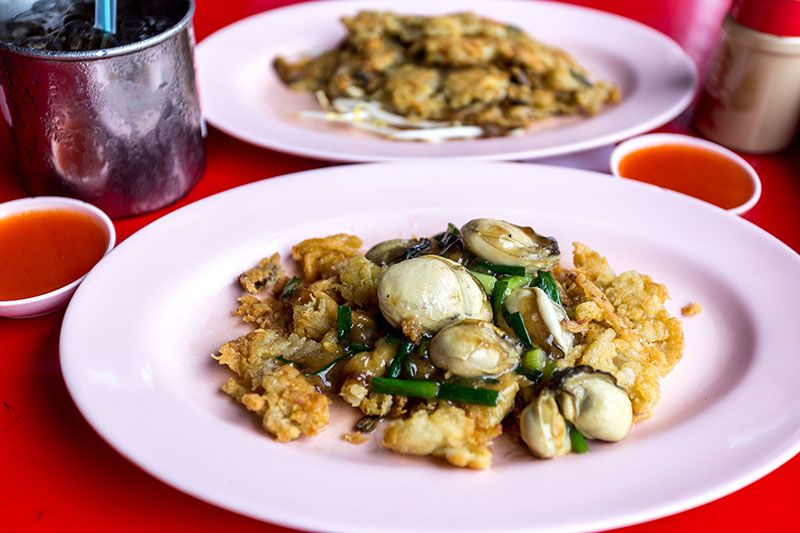 If you get nixed at Jek Pui, or actually need a real table to sit at, move up a notch and head to Nai Mong Hoi Tod, where foodies in search of Bangkok’s best fried oyster and mussel crepes flock to indulge in semi-street food nirvana (there is actually a small shop here with a handful of tables). The eatery has received a Shell Suan Shim food award for its oyster crepes, and it really is worth making the trek for. You can choose either regular (which is more like an omelet) or extra crispy.

There are plenty of places to eat seafood around Yaowarat. Longstanding restaurants like Hua Seng Hong, Siang Ping Loh, or Tang Jai Yoo, which Anthony Bourdain and Chef McDang have heaped praise on, packed with families getting their fill of stewed goose feet and entire roast suckling pig. The corner of Yaowarat and Soi Padungdao is the scene of seafood bedlam each evening, as both tourists and locals sit out on the corner at Lek and Rut and T & K, two institutions that serve an array of giant prawns, crab, and fish, at prices that are no longer a bargain. 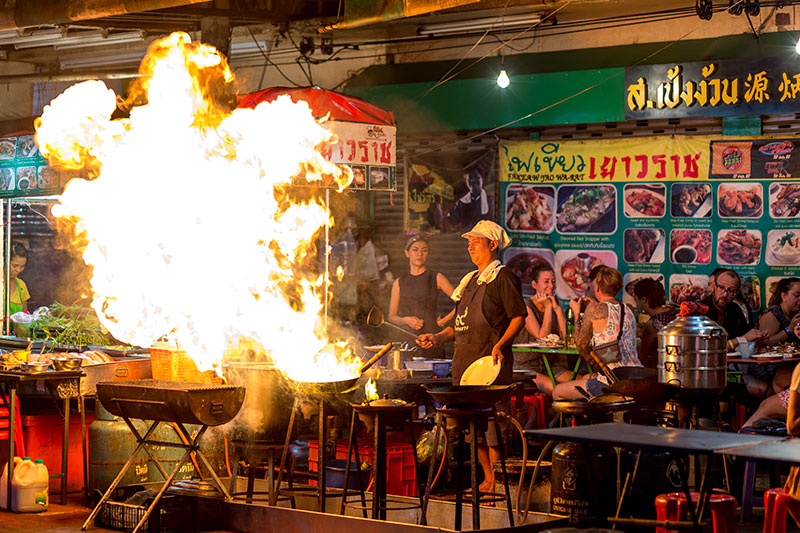 The atmosphere is pretty good here, but if you really want atmosphere, head over to Faikeaow Yaowarat, a small street restaurant and site of Chinatown’s beset theatrics, other than taking in a Chinese opera performance. Staples here are the usual tom yum goong, along with entire sea bass pla kaprong neung manao, cooked in a lemon and chili soup base. Yet everyone shows up here for the veggies. Pak bung fai daeng, or stir-fried morning glory, is usually cooked very briefly over a very high flame in a wok, to bring out the best taste, and at Faikeaow Yaowarat, the chef has taken this to far new heights. If we were in another country, there is a good chance the place would be closed down and the chef jailed for being a pyromaniac, but here, just off of Yaowarat, every five minutes the guy lights up half the street in a display pretty much on par with the annual Chinese New Year fireworks show. 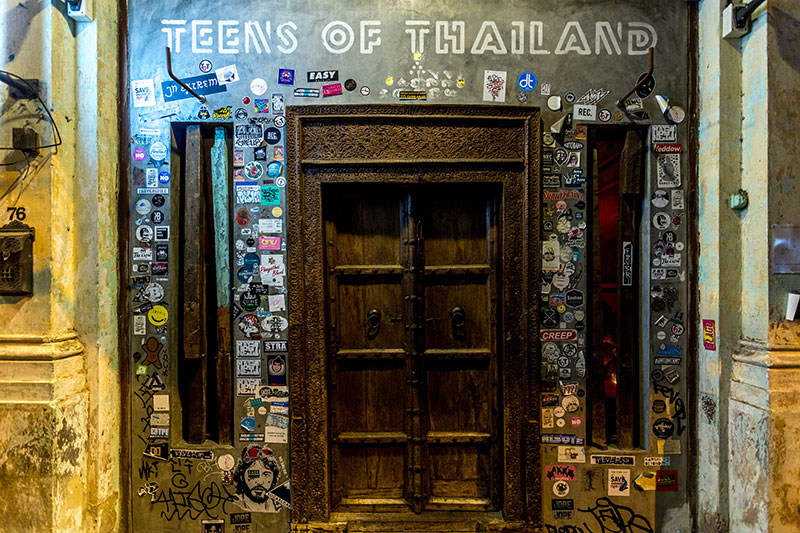 After all the flame, you’ll undoubtedly need some cooling off, so wander over to Soi Nana (no, not the red-light one), a small lane that was formerly full of crumbling shophouses which now is home to a wonderful retro bar scene. The top picks here are Teens of Thailand, where thick wooden doors hide a funky speakeasy that is a gin lover’s delight. Have a Thai iced tea gin and tonic or one infused with chrysanthemum made by the superb mixologists, and admire the old movie posters on the wall while talking to your new neighbor.

Just around the corner, there is the hip Tep Bar, where they make their own upscale ya dong (white spirits), served as a tasting set with three different shots, all accompanied by a group of traditional Thai instrument musicians on weekends. This entire street oozes charm, and is a positive indication of what the future of Yaowarat might look like. 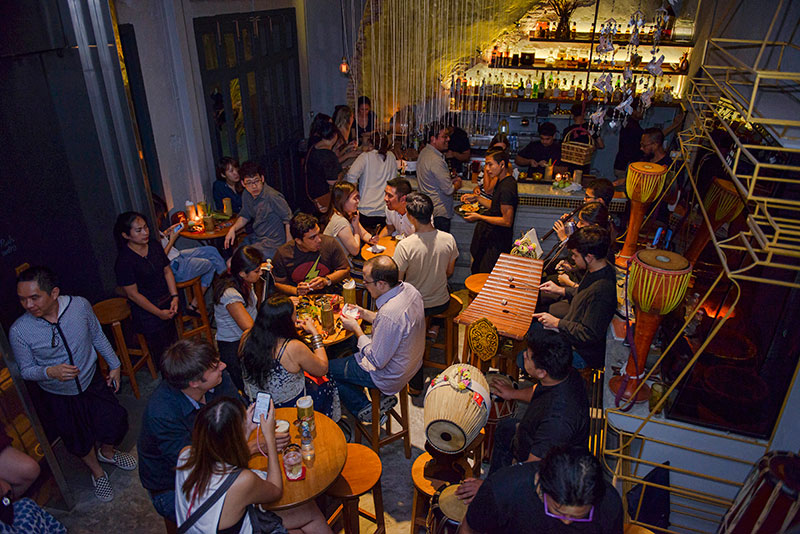 If you get the urge for a staycation after a long night out, Shanghai Mansion is Yaowarat’s latest ode to boutique. The design is Chinese Art Deco, and the hotel resembles something out of 1930s Shanghai. Claw bathtubs and old photos grace the charming rooms, and there is a vintage jazz bar upstairs to add to the mood. 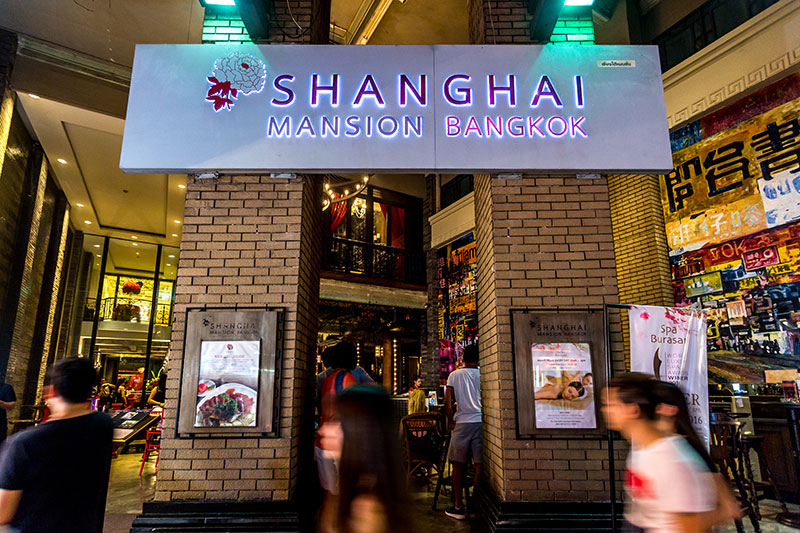