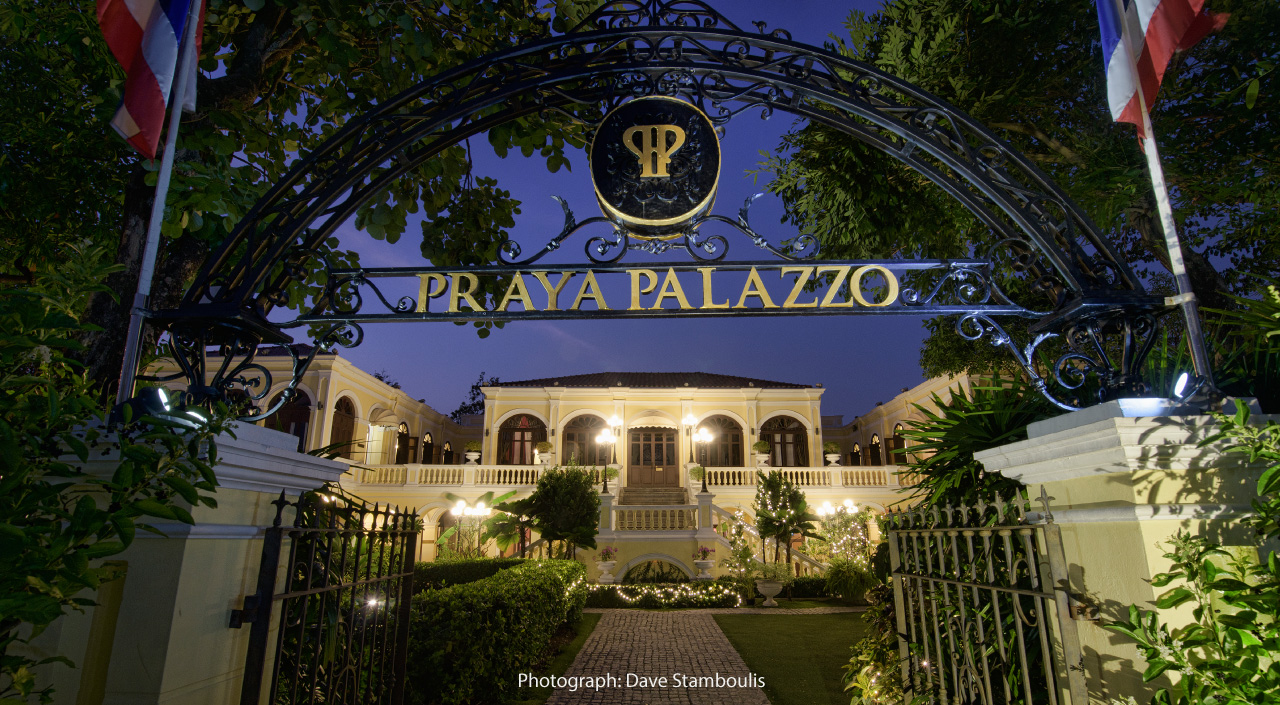 Living the daily grind in Bangkok, at times it can even be difficult to escape and relax. Those who are fortunate enough to be able to do so often are faced with expensive flights to Samui, Phuket (which have their own traffic and overdevelopment woes), or further afield, to spots that are time consuming to reach. Heck, sometimes even getting into the packed BTS with a suitcase can be nerving enough to make one not want to go out. Fortunately, once you make the effort to check in at Praya Palazzo, you won’t need to go anywhere, and you’ll be recreating in Bangkok’s most tranquil spot, enjoying a slice of Chao Phraya and old Bangkok history. 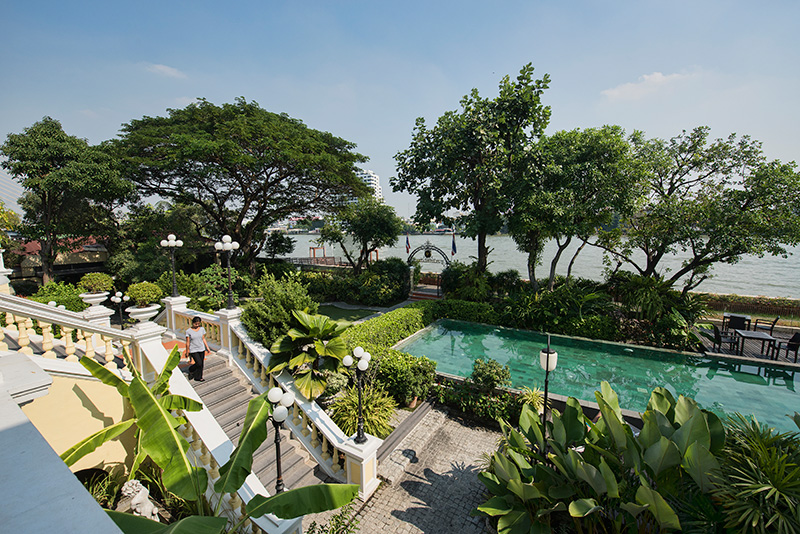 One of the most tranquil spots overlooking the Chao Phraya river | Photo Credit: Dave Stamboulis

Palladian architecture, inspired by the classic temple styles of the ancient Greeks, took off in Europe in the 17th and 18th centuries. In Thailand, when King Chulalongkorn (Rama V) sought to modernize and open up the country, foreign architecture came along with other developments, and some of Bangkok’s most beautiful buildings were built in this style, in small communities on the banks of the Chao Phraya.

Praya Palazzo, first known as “Ban Bang Yee Khan,” was built in 1923 by a European architect for Colonel Praya Chollabhumipanich, a Thai-Chinese nobleman who handled Far East affairs for the king. Sitting on the Thonburi side, the house was reached only via boat and gave easy access to looking out over all of Bangkok’s river commerce. Chollabhumipanich died in 1938, and his family stayed in the mansion until 1946, by which in time, roads had replaced the river as the main form of transportation. The family bought another home on the Bangkok side of the Chao Phraya, and donated the house to the Muslim Community Foundation, which opened Ban Bang Yee Khan as a school, replacing the old school in the neighborhood which had been destroyed during WWII. The school, called Rachakarun, functioned successfully until 1978, when it was forced to close due to financial difficulties.

Following this, the house was leased to a private firm which used it as a vocational school, but this too closed in 1996, and the building sat abandoned for more than a decade. Fortunately, a Thai professor and architect, Wichai Pitakvorrarat, lived across the river from the mansion, and he used to marvel over its architecture and wondered what was becoming of the historic home. Taking further interest, he and his wife teamed up to restore and renovate Ban Bang Yee Khan to its former glory.

The building had been damaged by floods and not taken care of for ages, and additionally, it was extremely expensive to do restorations, as all construction materials had to be transported by boat due to the lack of road access, not to mention many of the materials and original construction styles were often hard to find or replicate. However, in 2009 the mansion was reborn as a hotel named Praya Palazzo, and today has become one of Bangkok’s most idyllic escapes.

While just a stone’s throw from trendy Phra Athit Road, the river separates Praya Palazzo from all of Bangkok’s chaos. The hotel has a private barge which runs day and night, and guests are given a cell phone to use throughout their stay, so they can call for a journey any time they want to go out or come home, so one never feels inconvenienced. Those looking for a staycation will never want to leave though, as being car and road-free here, it feels like one is staying on a remote island somewhere, far from the city lights. 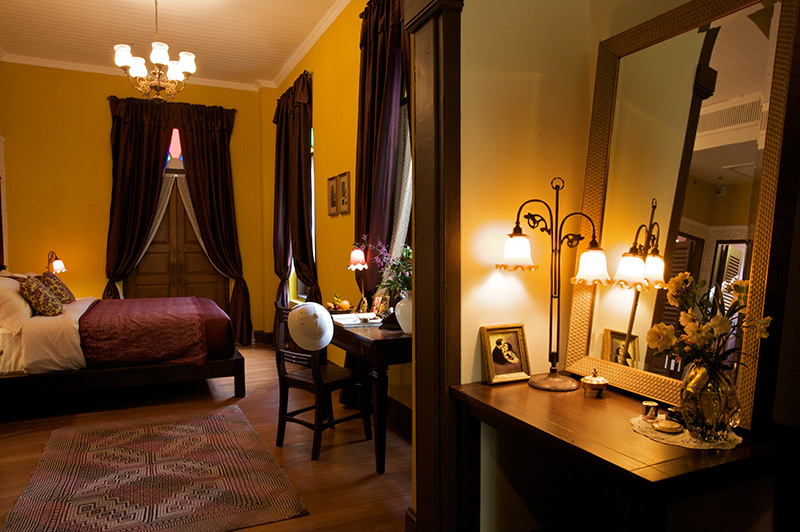 There are only 17 rooms at the boutique hotel, furnished with hand-made antiques, along with modern features like DVD players, flat-screen TVs, free Wi-Fi, and bathrooms feature large tubs to soak away the evening in. The property itself is intimate, with a grassy courtyard as well as a 15-meter freshwater lap pool set right by the river, with sun loungers to nap on. If you get bored, there is a library with books to read (along with a small art gallery) and the retro-colonial dining room offers afternoon tea complimented by traditional Thai sweets for those who want to stay out of the sun. 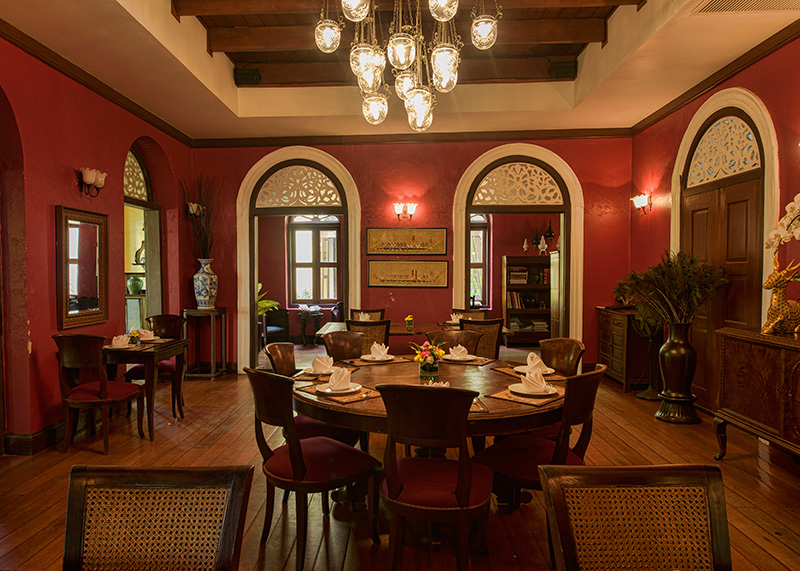 The in-house restaurant also squelches any need to set out across the river as well, serving up sublime hard-to-find Thai recipes handed down by the Royal Palace. Tom jiew, a spicy herbal soup that dates back to the courts of Rama V, isn’t found on most menus in Bangkok, and heads a list of great authentic Thai offerings. The pla kapong jian nam makaam, fried sea bass with tamarind sauce is divine, with the thick hearty flavor of the tamarind sauce adding a real kick to the delicious fish, and the various Thai meat salads, such as the yam nuea spicy grilled beef features abundant slices of imported beef cuts that are topped with a lime, shallot, chilies, herbs, and fish sauce dressing. Guests can opt for dinner in the cool retro restaurant, or else sit out right next to the river.

On a recent stay here, I kept being reminded that I really wasn’t far from home, actually just a short ferry and BTS ride away, and yet the complete stillness, absence of noise, and disappearance of all signs of my normal Bangkok-busy-ness made me realize what an excellent escape this was, the type of staycation I could most definitely use more of.