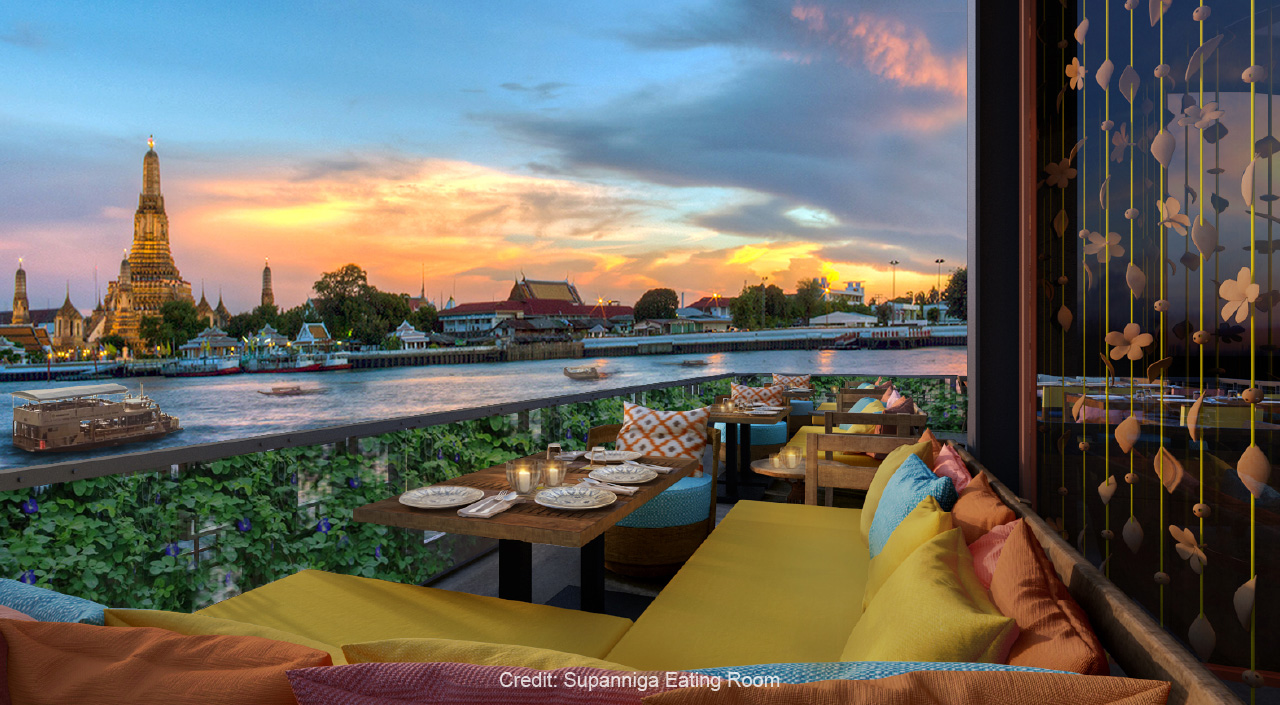 Chances are thousands of people have visited Sanam Luang these past months, the large public square and park at the north end of the Grand Palace. October saw the final rites for His Majesty the late King Bhumibol Adulyadej, who was cremated here in an ornate royal funeral pyre. A month-long exhibition will then be held throughout November in remembrance of the late and much-loved King at the Royal Crematorium at Sanam Luang in Bangkok.

Sanam Luang, or “royal main ground,” was the name given to the area by King Mongkut (Rama IV) in 1855. Prior to that it was known as Thung Phra Meru, or the “royal cremation ground.”  Sanam Luang is also the site of the annual Royal Ploughing Ceremony and Ceremony of Calling the Rain, where the king officially welcomes the rice planting season. With its proximity to the palace, this large park was originally used for rice planting by royalty.

A short walk from Sanam Luang will bring you to some excellent eating and drinking options after your excursion to witness the exhibition. Here are some of the best options to explore. 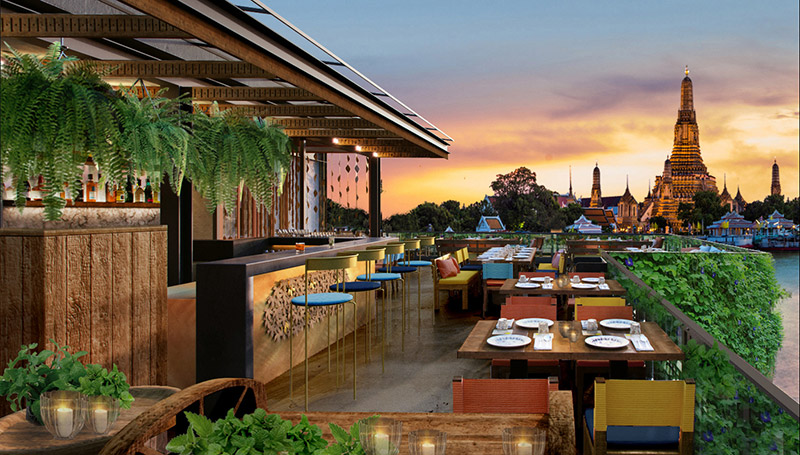 You get the best of all worlds at Thai eatery Supanniga Eating Room by Khunyai x Roots Coffee, which already has several branches in Thonglor and Sathorn, brings its traditional recipe-laden menu to the Chao Phraya River, teaming up with gourmet coffee roasters Roots to create a relaxing riverside eatery and cafe that has the best view of Wat Arun, the iconic Temple of Dawn, which sits just across the water. Supanniga owner Thanaruek Laoraowirodge, who also runs the Michelin-starred Somtum Der in New York City, has lots of recipes here from his grandmother (hence the tag ‘by Khunyai’ which means ‘by grandmother’ in Thai), who hailed from Trat Province on Thailand’s eastern seaboard.

Come here to relax in the afternoon, sipping a smooth arabica mixed with oolong tea and pieces of dried jackfruit, and then move to cocktails (courtesy of the team at Vesper) and the sublime Supanniga food. Make sure to sample the signature moo chamuang tender pork stewed with chamuang leaves as well as the simple fried cabbage dish, made with a super-premium grade fish sauce from Trat that revolutionizes the dish into one of the best plates you’ll find in the city! 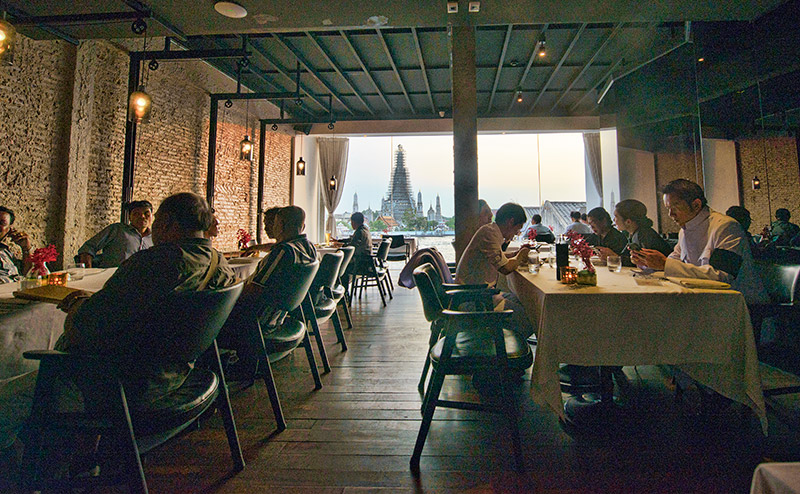 Just a stone’s throw from Supanniga, Sala Rattanakosin Bangkok’s Eatery and Rooftop Bar also offer excellent Wat Arun photo ops. In the downstairs eatery, if you book early enough, you can get an intimate table for two in which both chairs face out the window, right across to the temple; especially romantic as the evening lights come on.

The elegant menu here has some creative fusion dishes such as tikka spiced salmon filet, tiger prawns with chorizo, and ahi tuna tartare, and there is plenty of healthy fare as well, with options like roasted quinoa served with feta cheese and black olives. Upstairs on the roof is where you’ll find the bar, which not only gazes out on the Temple of Dawn, but also looks behind directly to Wat Pho, giving you the best view all around the neighborhood. 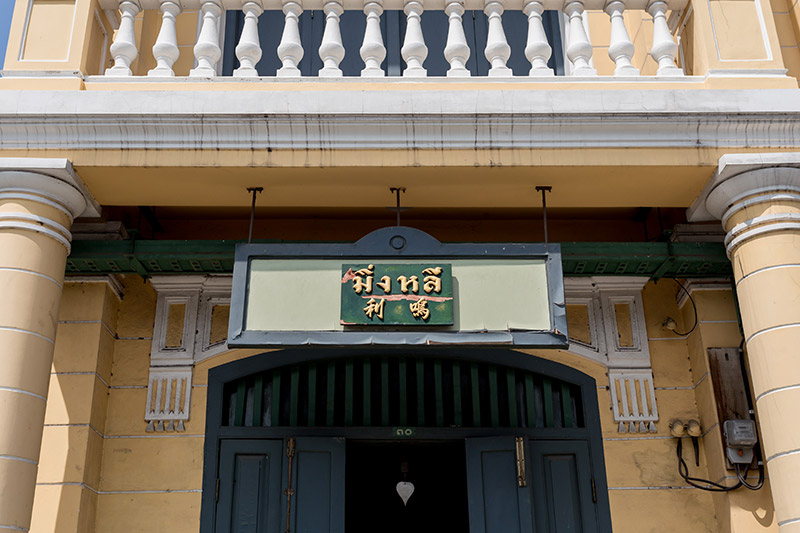 If you want something a bit simpler during the day, just near Sanam Luang on Na Phra Lan Road is Ming Lee, a simple shophouse Thai-Chinese eatery that has been here for decades.

Filled with 1920s decor, with high ceilings, slow fans, and swinging wood doors to enter, Ming Lee feels like a complete retro time warp. You can lunch on local specialties like ox tongue stew, crab omelets, and pork knuckle soup, all the while taking in the old school decor. It usually closes by six and is so nondescript most of the tourists passing by to visit the Grand Palace across the street don’t even know it’s there. 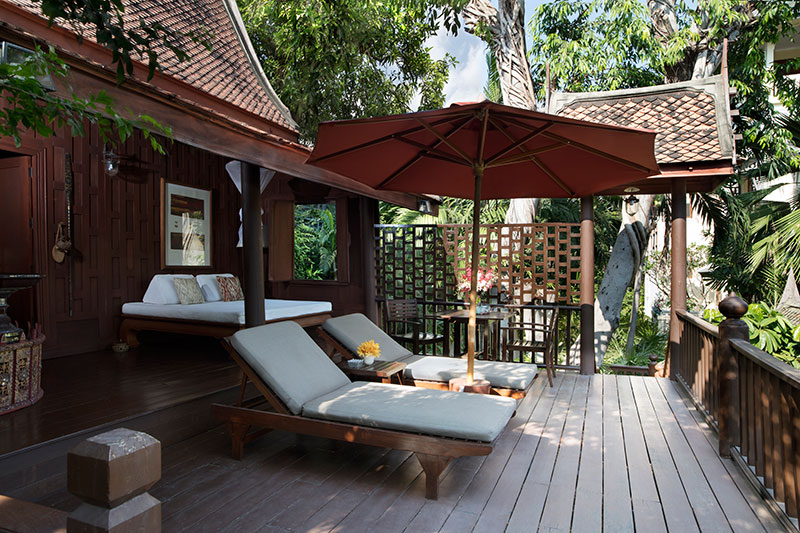 Should you decide to have a stay overnight in the area, Sala Rattanakosin has rooms from which you can sit in your bathtub and gaze out at the river and Wat Arun, truly one of the more unique stays in town. And speaking of unique, as well as about royalty, as we have been with Sanam Luang, why not splurge on a night at the Chakrabongse Villas.

The Chakrabongse Villas was built in 1908 by His Royal Highness Prince Chakrabongse, and the home was used by the prince to attend ceremonies at the Grand Palace. In 1932, HRH Prince Chula Chakrabongse made it his permanent residence, and his daughter then refurbished it, making it a gorgeous intimate lodging. The traditional Thai teak villas built on stilts that came from Ayutthaya, and were transported down the Chao Phraya river back when the residence was built.

There are only a total of seven rooms here, furnished with Chinese antiques and other stately art, and the entire property is completely hidden from public view, tucked behind a large gate with plenty of trees and foliage covering the entry. Guests have beautiful river views and can dine in a private pavilion restaurant which features a rotating daily set menu serving royal Thai cuisine.