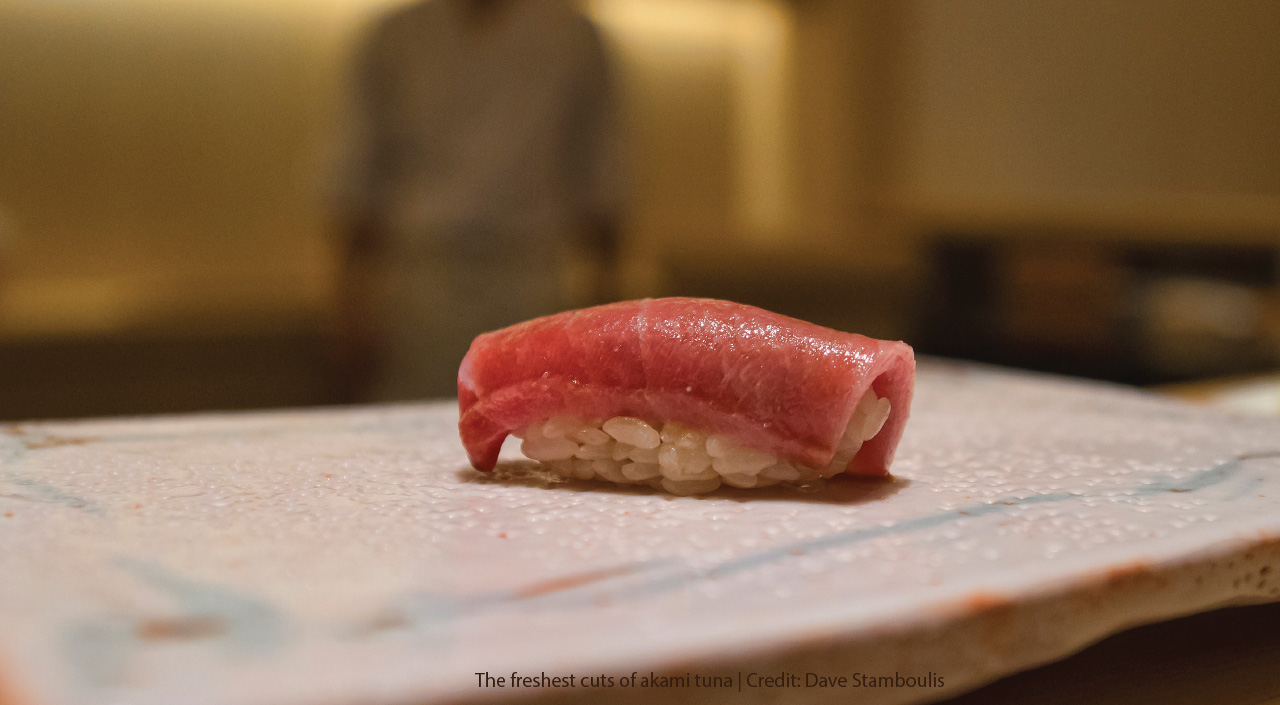 With some 80,000 Japanese living in Bangkok, the city is home to the fourth largest Japanese expatriate population in the world, trailing only New York, Los Angeles, and Shanghai. With this kind of numbers, you’d figure there would be plenty of opportunities to sample superb Japanese food, and this is indeed the case. However, it’s only in the past few years that this has really come to fruition, especially now that Japan has gotten rid of visa requirements for Thais (for visits under two weeks), meaning that more Bangkokians are visiting the Land of the Rising Sun, learning about soba, udon, okonomiyaki, and sashimi, and coming back home with further appreciation and knowledge of good food, and clamoring for more. Here’s a look at some of Bangkok’s best Nihon-ryori, completely varied in type, and yet all incredibly delicious. 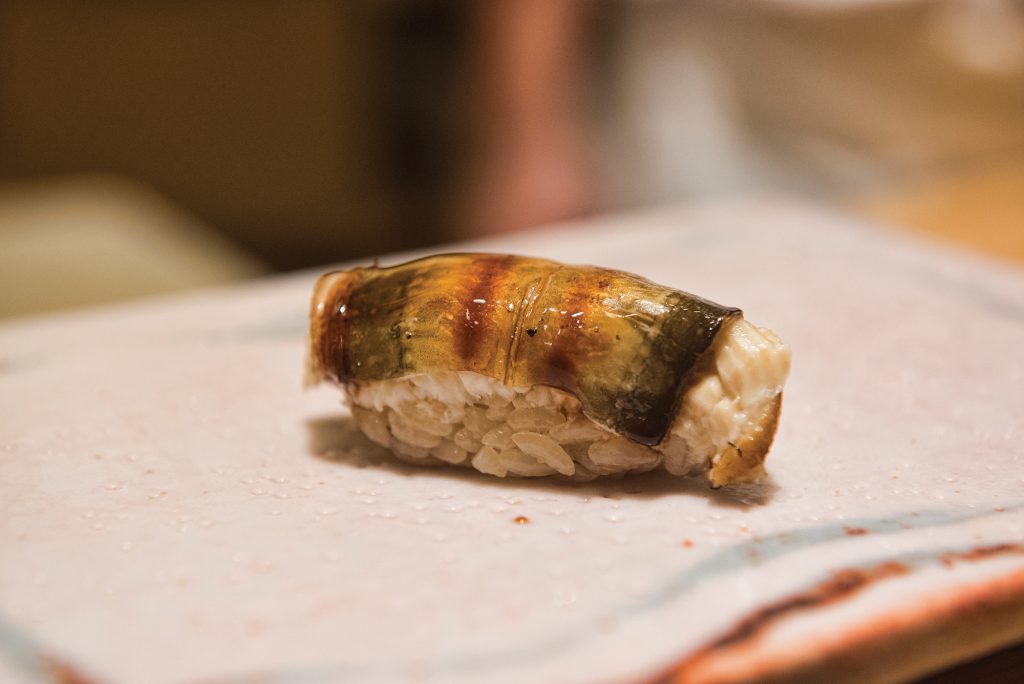 This is omakase sushi at its finest. Omakase comes from the Japanese word makaseru, which means “to entrust,” and literally means “up to you,” meaning that diners leave their dinner choice completely in the hands of the chef. This style of serving sushi has gained a huge following in Japan, spearheaded by the famous Jiro Ono, star of the documentary Jiro Dreams of Sushi, who ran a 3-star Michelin restaurant in Tokyo, serving 10 lucky diners per sitting a 20-course masterpiece of the tastiest and most perfectly prepared sushi and sashimi money could buy. Jiro has since retired, but some of his protégés have taken up the void. Hachiro Mizutani worked under Jiro and also ran a 3-star Michelin place, retired, and the latest master to hit Tokyo has been Takaaki Sugita, who runs an omakase restaurant that is booked out at least a year in advance. 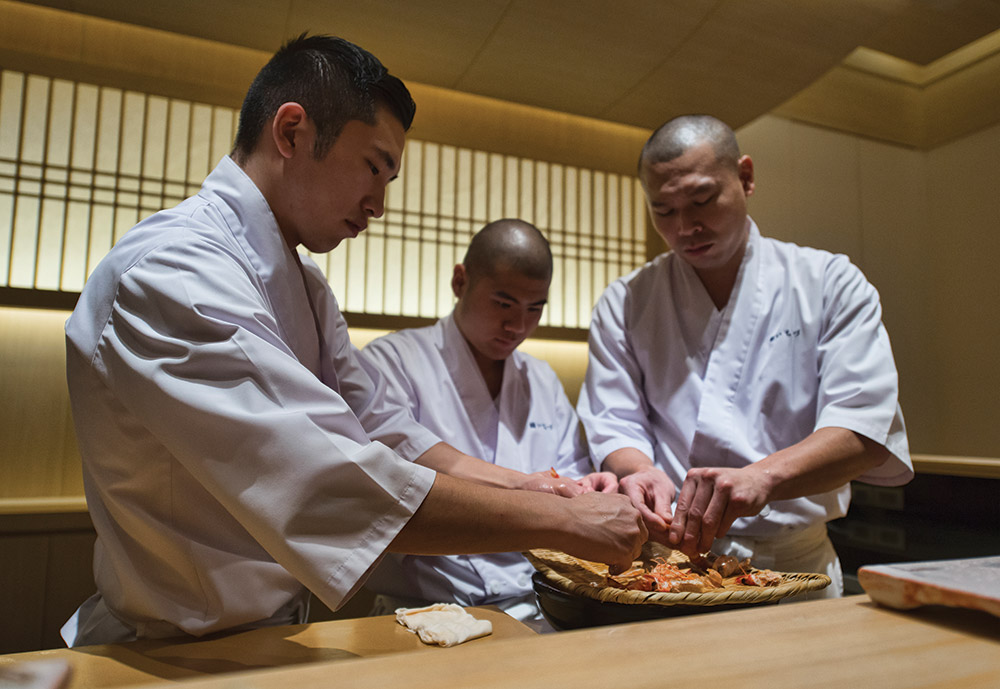 Chef Riku Toda, who trained both under Mizutani and Sugita, has brought the art of sushi perfection to Bangkok, presiding over a small intimate counter at Sushi Ichizu, where 10 diners are served twice per evening. Not only is the array of fish the absolute best you’ll find in town, as the restaurant has connections to the crème de la crème of Japan’s seafood suppliers, but Chef Toda’s perfection and skill make a dining experience here more akin to a fine theatrical performance. Items like Hokkaido hairy crab or black abalone are brought out for diners to inspect and take photos of prior to being prepared, and servings of ankimo (monkfish liver), uni (sea urchin), and shirako (cod sperm!) will blow your mind and palate as to how something that sounds so inedible can be so amazingly good. Eating here doesn’t come cheap, with tasting menus running either THB 6,000 or THB 8,000, but the otoro fatty tuna slices and opportunity to witness a great chef in action might be your foodie nirvana experience of a lifetime. 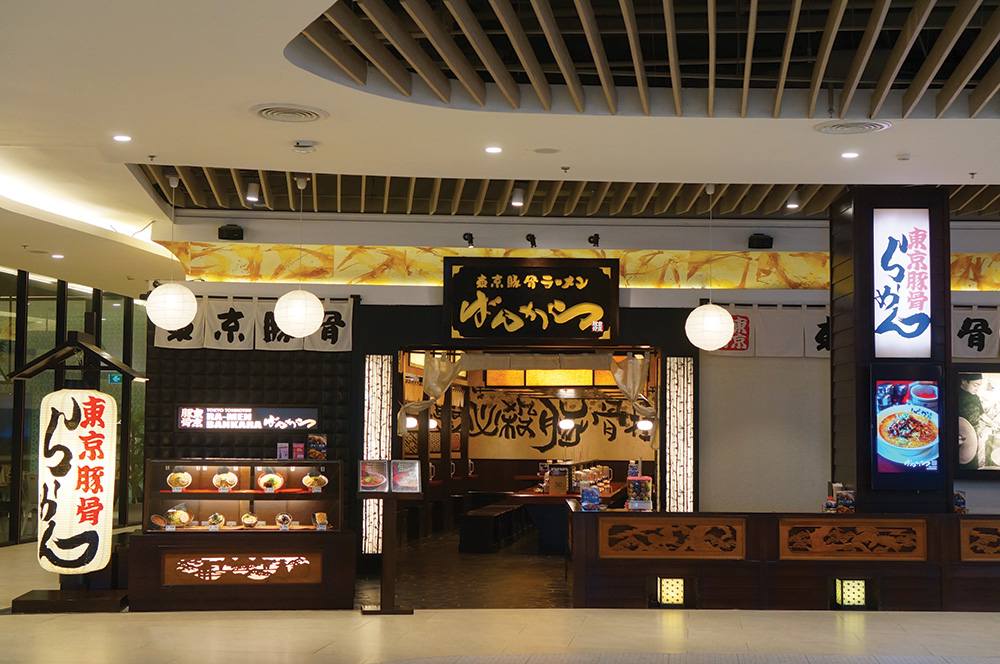 Ramen has become a popular favorite in Bangkok, with hundreds of hole in the wall joints to satisfy everyone’s noodle craving, but Bankara, the franchise chain from Tokyo, really excels. They’ve since opened up in Siam Paragon, but the original branch on Sukhumvit 39, which was the first shop to open outside of Tokyo’s Ikebukuro, is the most authentic. 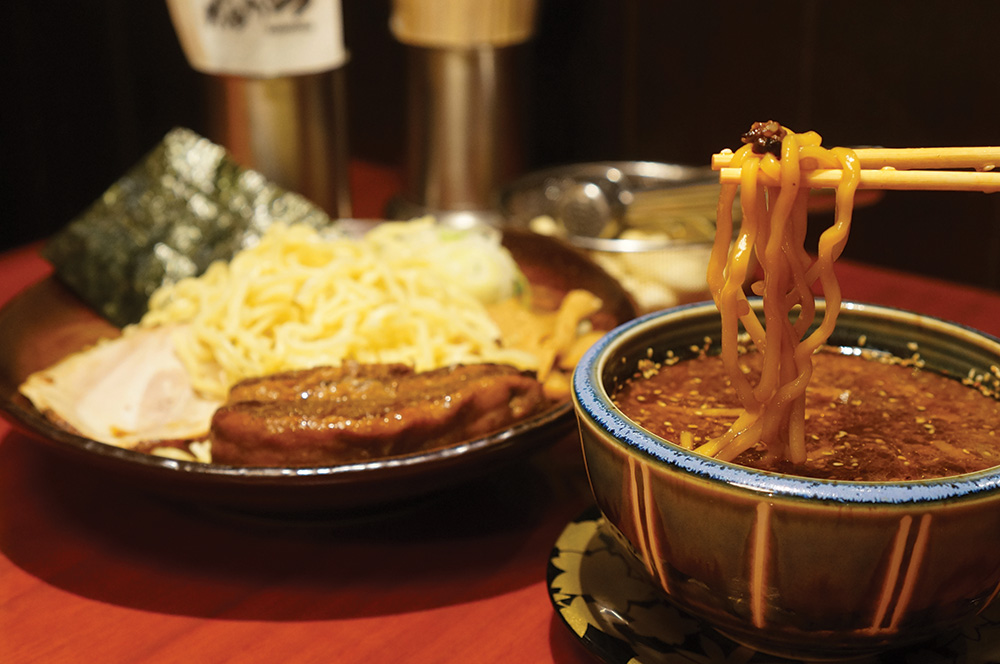 You can choose from tonkotsu (pork belly), miso, tsukemen (cold noodles), or the original Bankara ramen, all of them featuring intensely rich broth and served in giant heaping bowls, ensuring you won’t be leaving hungry. The kakuni braised pork served here is melt-in-your-mouth delectable, and all the ramen helpings are fatty and oily, exactly how a bowl of good ramen should be. If only the temperatures in Bangkok were a bit more like Tokyo in the winter, folks would really appreciate how much this stuff warms you up. 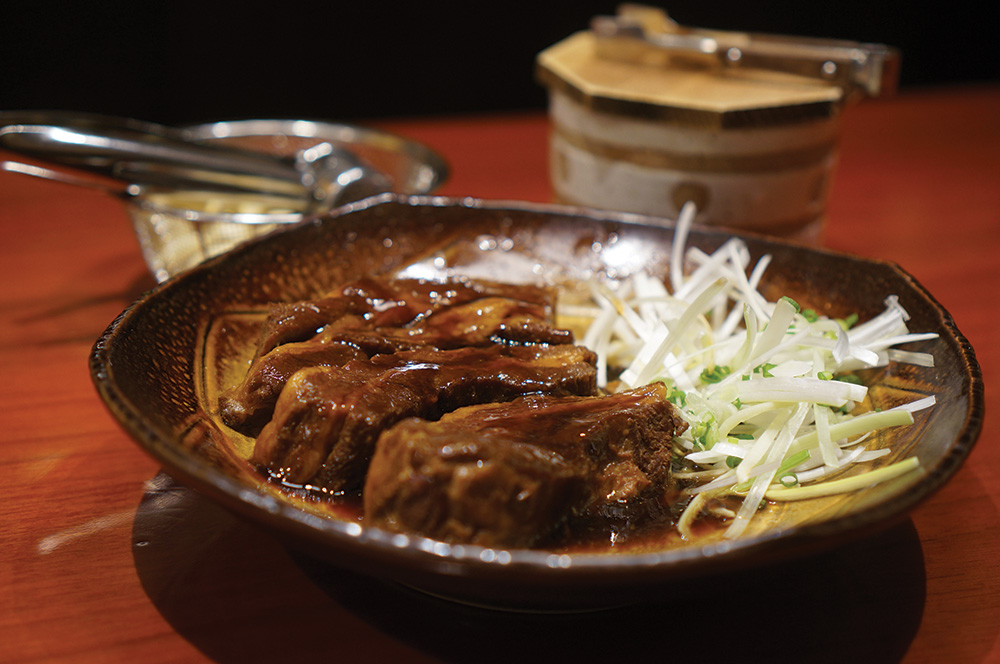 These are just a fraction of the fine array of Japanese offerings that now grace Krungthep. From tiny izakaya pubs to kaiseki fine dining, the city is inundated with choice, and the fact that so many are so good is really a tribute to both chefs and owners, considering that they have to compete with fabulous Thai food. So don’t wait for that trip to Kyoto to enjoy your sushi, ramen, or splurge omakase meal, just head out locally. I would say “bon appétit,” except the Japanese don’t say that before eating. It’s “itadakimasu.” 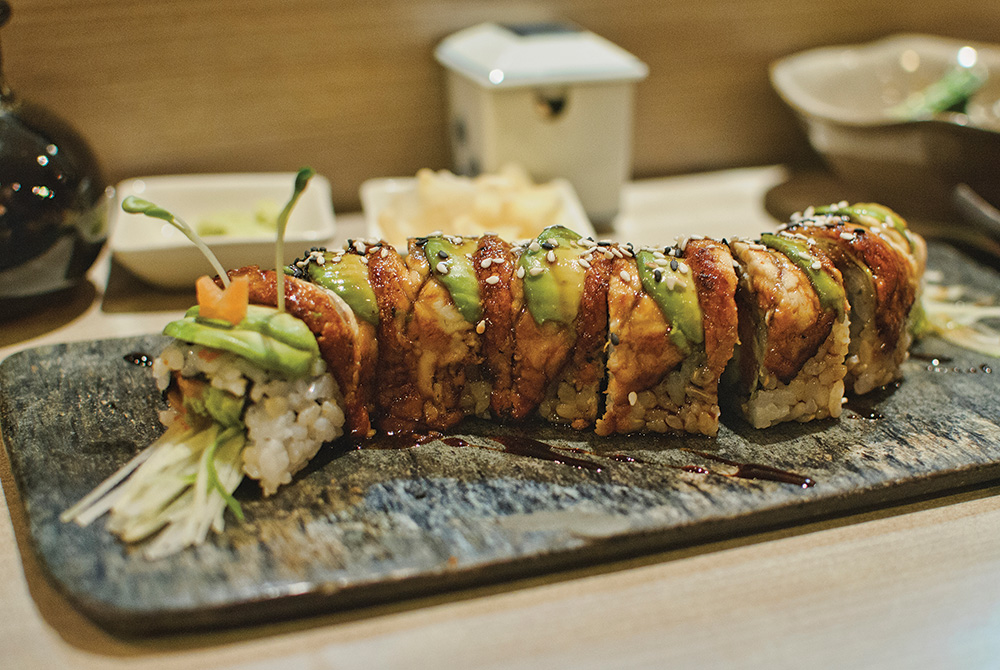 Isao holds the distinction of being one of the few restaurants in Bangkok that has a line outside almost every single night of the year. Hopefully, their much needed recent expansion project will alleviate some of this, but there is a reason why folks lineup outside and wait 30-plus minutes to get a seat. The owner here studied under the chef at Green Tea, a Chicago sushi institution famed for making creative maki rolls, and while it certainly isn’t traditional Japanese, nobody can argue with the taste of the various creations here. 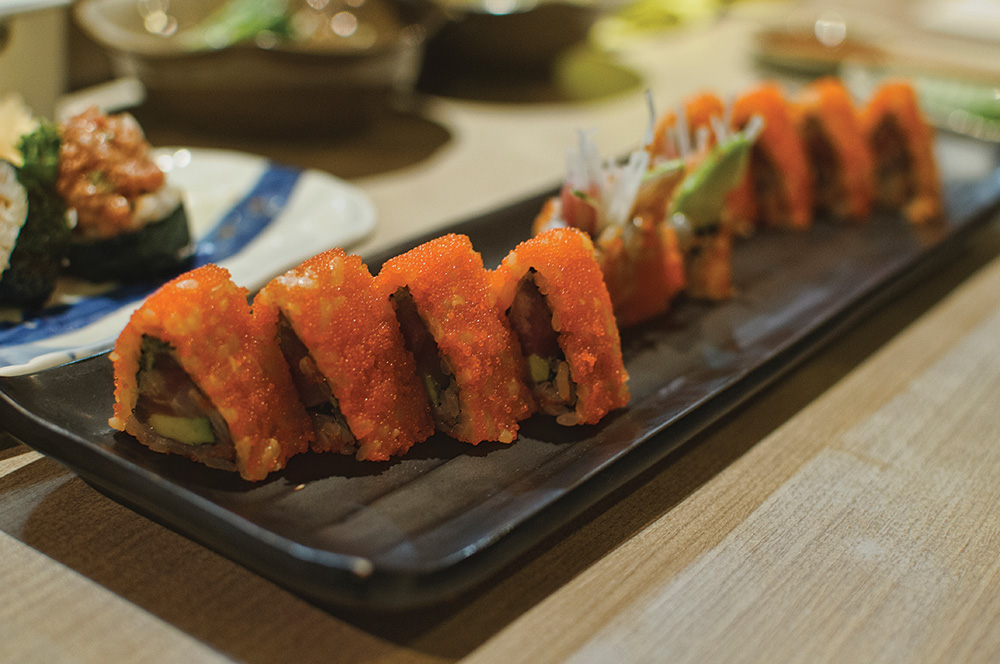 Top draws include the “Dragon”, a dragonshaped sushi roll stuffed with shrimp, avocado, tempura, and roe, and the aptly named “Volcano”, a baked scallop in cream sauce served in a shell that resembles molten orange lava. The spicy tuna and salmon maki will leave you salivating, and the “Crunchy” or “Sushi Sandwich” creations, which use tempura flakes to create the roll, are on every table. Fusion sushi doesn’t always go well, but at Isao not only does it deliver, but it’s so good even purists will have reason to return.