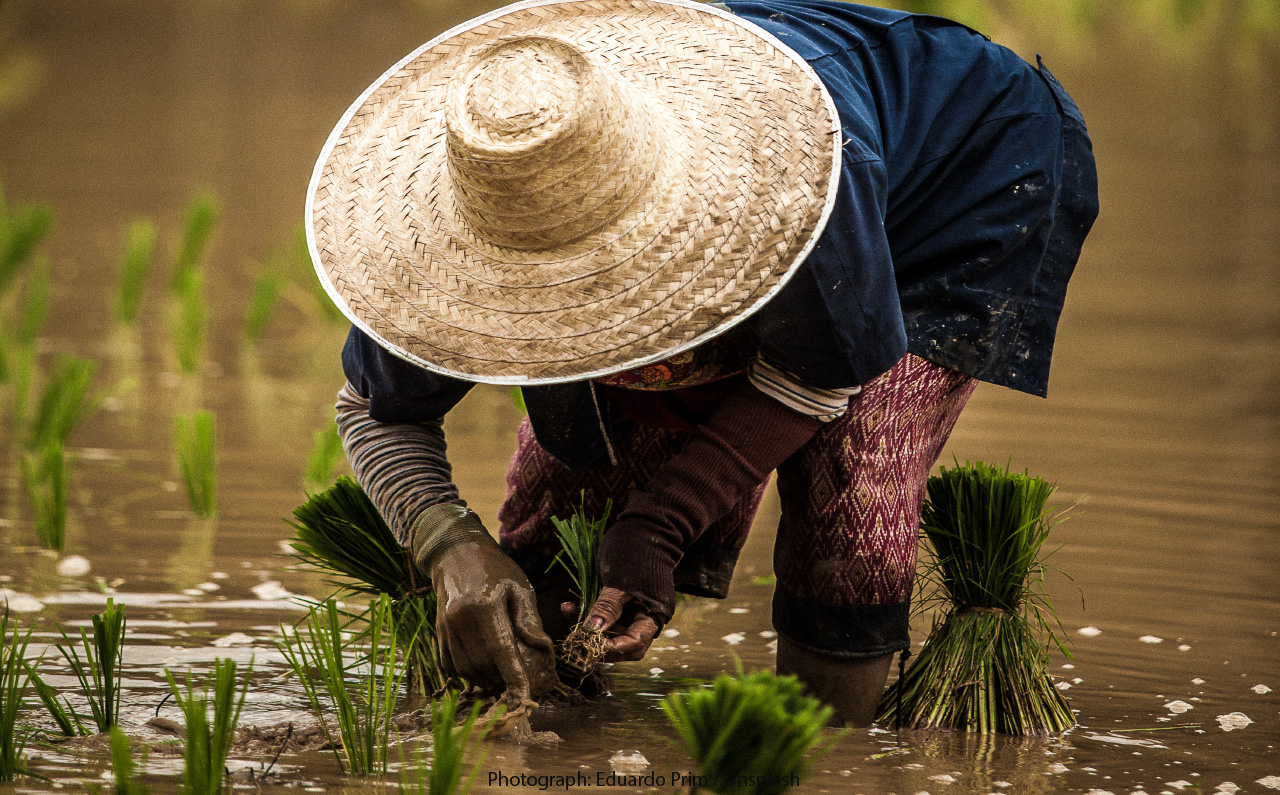 To the Magic Rice, I Raise My Plate

This time of the year when we start to feel, hear and smell the rain, it is difficult not to talk about the main sustenance of Thailand: rice. With the beautiful Royal Ploughing Ceremony over last month, many people who came to Bangkok for temporary jobs have begun to migrate back to the countryside to help their family grow this magical crop.

There are so many types of rice in this world, and after some research and consulting with my scientist sister, these are some fun facts about rice that might amaze you.

There are over 100,000 varieties of rice in this world!
But we may have heard of only a few, such as Jasmine rice of Thailand, Basmati rice from Pakistan and India, or Sushi rice of Japan. This is because these varieties of rice can be grown easily in different climates of the world, hence can yield higher profit for farmers and are more well-known among consumers.

The Rice Department of Thailand, for example, has many samples of rice varieties. The parties involved have been developing rice varieties through the process of experimenting and crossbreeding over the past decades. The main purpose is to create rice of high quality that is both nutritious and also strong enough to withstand unexpected circumstances weather-wise.

They are also working on many new different tools and techniques, such as Smart Farming or Precision Farming, which can help farmers reduce wastage in agriculture. Technology like computer programing, drones and robots will also play an important part in improving production yield, all this in the hope of creating a more sustainable way to feed the increasing world population, and end famine in many other parts of the world.

There are so many ways to categorize rice varieties, not just as white and brown rice.
In making brown rice, only the outermost layer of the grain of rice called “husk” is removed, leaving consumers with more nutrients than white rice, including magnesium, phosphorus, selenium, niacin, and vitamin B6. White rice, on the contrary, has its husk, bran and germ layer taken away for a smoother texture.

Apart from this serving preference, rice can be categorized by shape and color, such as short and white Japanese rice, long and yellowish Basmati rice, or long and red Bhutanese rice. Rice can be found in a sticky form, such as Thai glutinous rice, or a non-sticky form, such as Indian Basmati rice, depending on the level of amylose and amylopectin, the two types of starch found in rice.

Technically, rice, especially Asian rice, can be grouped into two major domestic varieties: Japonica rice and Indica rice. Japonica rice can grow well in places with temperate climates and at higher elevations above the ground, such as Portugal, Spain, Japan, California, and Italy.

The Indica rice, on the contrary, is usually grown in hot areas, such as Sri Lanka, India, Thailand, Vietnam and southern parts of China. While just looking at it from the outside, you may not be able to easily tell what type of rice that is. Many times, the testing of its DNA sequences is the only solution to identify each rice variety correctly.

Jasmine rice doesn’t really smell like jasmine flower, does it?
Jasmine rice that is so iconic to Thailand did not actually originated in Thailand. It was brought to the Kingdom from Cambodia in the early Rattanakosin era. Later on in 1954, Thai government officials, heads of local farmers and agricultural academics started a process of carefully growing, comparing and selecting the best Thai jasmine rice strain out of the 199 rice samples. Finally, in 1959, the perfect type of Thai jasmine rice strain called “kao khao mali 105” (or Jasmine white rice 105) was approved and shared with local farmers to grow, and eventually became the most popular among Thais and one of the most favorite delicacy worldwide.

One surprising fact about Jasmine rice is that it is called kao hom mali, which means “rice that has the sweet scent of jasmine flower”, but the original name of this world-class rice is actually Kao Khao Mali – “rice that is as white as jasmine flower” (khao = white, kao = rice, hom = smell, and mali = jasmine).

This is because this type of rice is as white as the jasmine flower when cooked. It does smell so good but this is not because it has tiny bits of jasmine flowers in it, but thanks to the aromatic chemical compound called “2-Acetyl-1-pyrroline” that is also found in Basmati rice and pandan leaves (Pandanus amaryllifolius). That is why jasmine rice actually does not smell like jasmine flowers, but instead, smells more like pandan leaf. But we can admit that the change of its name to one of Thailand’s most famous flower did help boost the sales after all.

Brown rice is truly magical rice!
As mentioned earlier, brown rice contains more vitamins and minerals than its naked counterparts. In this modern world,  people tend to care more about their health, and brown rice, along with whole-wheat or whole-grain bread in the Western world, seems to be gaining in popularity these days.

One of the youngest, and currently the most popular brown rice in Thailand, is the Riceberry rice. This strain of rice is a cross-breed between khao jao hom nin, a local non-glutinous purple-color rice, and kao hom mali 105.

After four years of research, the team from the Rice Science Center at Kasetsart University successfully created this soon- to-be-popular purple berry-like colored rice. It is known to help alleviate food-related chronic diseases like diabetes, heart disease, high cholesterol, obesity, and even some type of cancers.

In clinical studies, the rice was also found to be neuroprotective, hence comes with the potential to prevent memory impairment related to Alzheimer’s disease. Riceberry rice is just one example of how far we have come in rice development.

There are so many people involved behind every bag of rice: farmers, scientists, technicians, and policy makers, all working so hard, putting their best efforts, not only to feed their families but to feed us all. Rice growing is a complex process as well as labor-intensive and vulnerable to several external factors.

Hopefully, after you’ve read this article, every time you “raise your plate” to ask for more rice, you would appreciate every spoonful a little bit more.