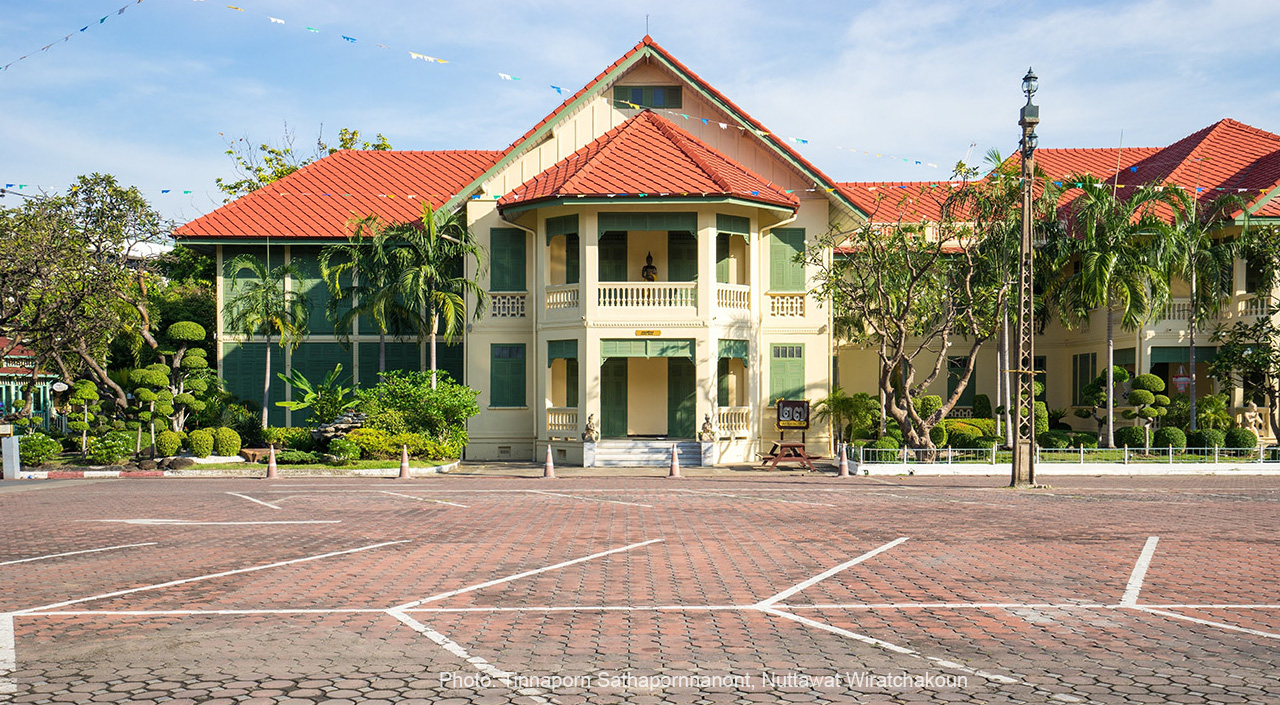 A Stroll Through the Royal Residence

Bangkok has never been known as a pedestrian-friendly metropolis. It’s notorious for clusters of street vendors and unscrupulous motorbike taxis roaming the battered narrow pavements amid the perennially hot and humid weather. However, there are quite a few areas in the city worth exploring on foot. One of them is the area around Dusit Palace in central Bangkok.

This elegant neo-Renaissance- and neoclassical-style building has stood the test of time as the nation’s official reception hall since its  inception in 1915. The two-storied building, topped with seven copper domes, was constructed with Italy’s famed Carrara white marble. Created by artists Galileo Chini and Carlo Rigoli serving in the court of Rama V, the frescos on the walls and inside the domes portray the history of the Chakri dynasty. 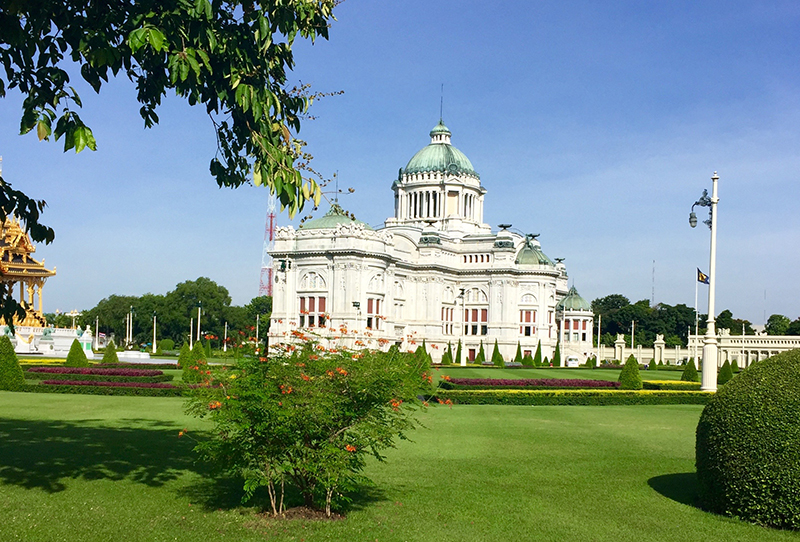 Although it looks like a typical Renaissance influenced marble structure, this building is an interesting engineering feat. When commissioned to oversee the project, Tamagno managed to complete its blueprint without knowing where the building site would be. Finally when the king pointed at a paddy-field plot in the palace compound for the new reception hall, Tamagno had to figure out how to rest the massive weight of the marble structure on the mostly wetland area.

One day, while pondering the solutions in the comfort of his private home set by the Chao Phraya River, he saw tugboats pulling rice and sand barges chugging up and down the river. He then came upon the idea of making water help support the weight of the throne hall by digging a water reservoir before driving the pilings into the ground.

His design was based on the belief that if the water can support the weight of the building, it will never collapse or tilt like the Leaning Tower of Pisa. The very technique applied to this building was revealed only a few decades ago during the Rattanakosin Bicentennial celebration in 1982. A team of engineers carried out a thorough inspection of the building and found its foundations submerged in the water, yet on the whole in fairly good condition. They planned to drain the water out, thinking that the flood was the result of heavy rainfalls.

However, a group of Italian-educated architects who were aware of the ingenious building technique advised against the idea by pointing out the reason behind the waterlogged foundations. Hence, the truth about how this amazing construction technique originated was made known to the public. Today, the Ananta Samakhom Throne Hall also serves as a museum. 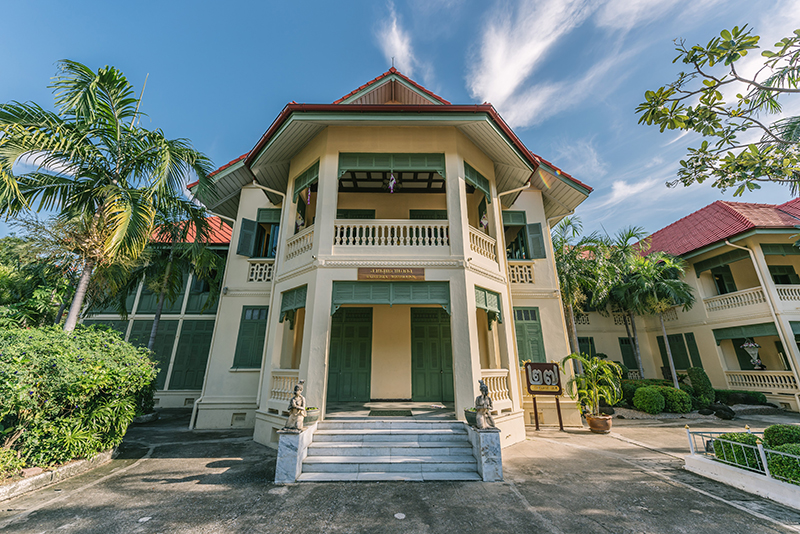 During this period, Princess Saisavali established a school near her residence to groom and educate young ladies. Daughters of aristocrats, noblemen, and rich merchants were soon sent to the palace for education and social-skills training at the palace school known as Nibhakarn School. Newly appointed school manager Her Royal Highness Princess Nibha Nobhadol developed a new curriculum and employed many competent Thai and foreign teachers to teach the students. The school was forcibly closed down during the Siamese revolution of 1932.

The school’s Saisuddha-Nobhadol Building, now part of Rajabhat Suan Sunandha University, has been given a new lease on life as a museum open to the public. The colonial-style museum showcases vast collections of art and antiques including paintings created by court ladies and royal crockery from those glory days.

Across the street from Suan Sunandha Palace is Wat Rachathiwat Ratchaworawihan or Wat Raja. Rama IV spent his time in Buddhist monkhood at this aptly named temple “Ratchathiwat”, which means a king’s residence. During the reign of Rama V, the temple underwent major renovations. At the behest of the king, Prince Narisara Nuwattiwong reconstructed the whole compound. 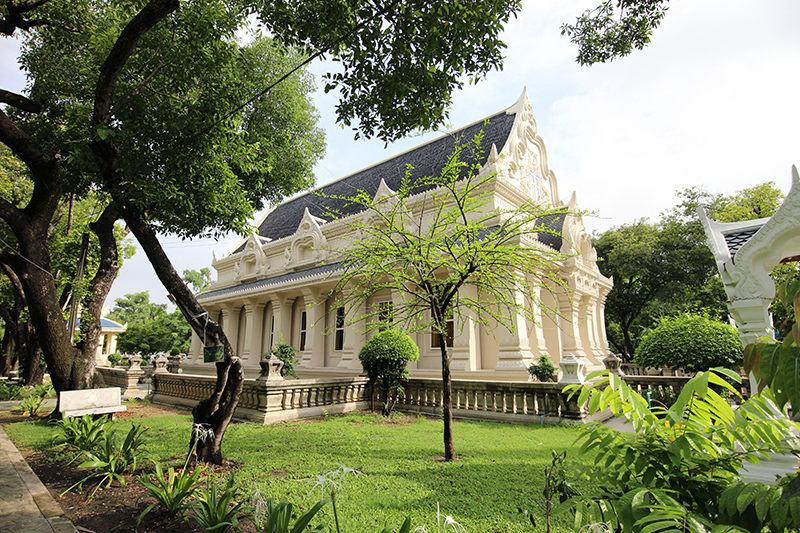 One of the temple’s must-see items is the murals in the ordination hall. The frescos by the Italian royal artist Carlo Rigoli capture the scenes from the Vessantara Jataka (also known as Maha Wetsandon Chadok) that tells the story of one of Gautama Buddha’s past lives. The Jataka tale is about a benevolent prince, Vessantara, who gives away all of his riches and possessions in search of true happiness and the meaning of life.

There’s a little secret in this temple: on either side of the main Buddha image, a little door leads to a small chapel that houses the three sacred Buddha images of the original ordination hall. There are other interesting buildings as well such as the sermon hall (made entirely from teak) and a monk’s cell that was once occupied by Rama V’s Queen Saovabha Phongsri.

After the walk down memory lane, reconnect with the real world by checking out nearby bustling Thewet Market where it’s tempting to grab a bite, buy fresh produce, and try yummy authentic Thai and Chinese street foods.