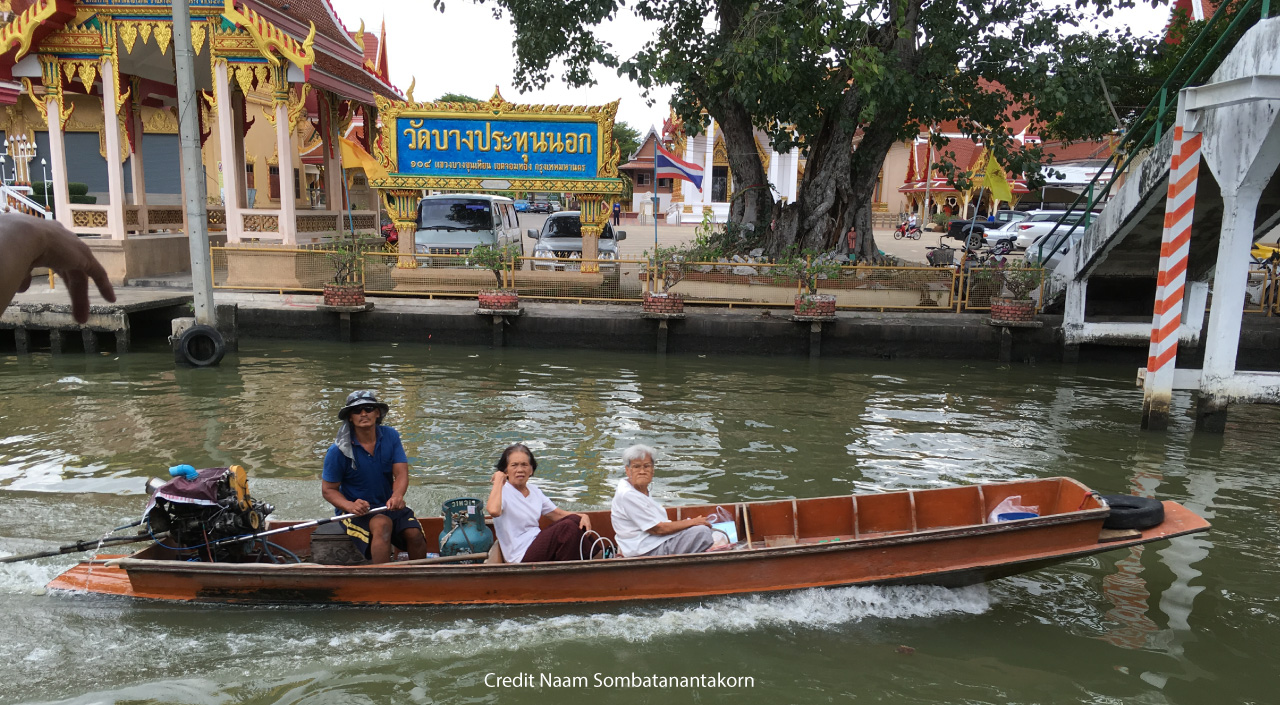 My father and my aunt always enjoy reminiscing about their childhood. Back then, whenever they were hungry they found things around the house to cook and eat – literally nothing from a grocery store or a restaurant, but all things found “around the house”. They fetched eggs from the pen and picked vegetables from the small backyard garden. The fun part was that whenever there was a heavy rain they would grab hand fishing nets and water buckets and waited at the pier in front of the house to scoop up the fish, prawns and eels swimming to the surface.

Small-scale Thai fishermen in the past called this phenomenon “fish shock”. It is caused by a sharp decrease in oxygen levels in the water making fish and other creatures unable to breathe properly and thus swimming to the surface.

My grandmother along with her in-laws would sit close to the bank scaling the fish, peeling the prawns, and salting them, a popular food preservation technique. The children had a lot of fun frolicking in the water or catching the fish. The supplies of salted fish and prawns would last for months, along the way dulling the kids’ appetite for fish for quite a long while.

The backdrop to my dad’s childhood tales was not some rural village in a remote province, but a community located right behind what is now Siam Square in the heart of Bangkok. Unbelievable, isn’t it?

Thailand’s central plains that straddle Bangkok and many other provinces host fertile land. The region’s network of rivers, their distributaries and irrigation canals carry sediment and rich nutrients from the north to the Chao Phraya river delta. The silt at the estuary is useful for fish and soil nutrition.

Set on the estuary, Bang Khun Thian district is home to several fruit orchards. Many inhabitants of communities in the area depend on the canals and the good earth for their livelihood. During summer, the water turns brackish, making the crops from fruit orchards richer in taste than those from orchards using freshwater. 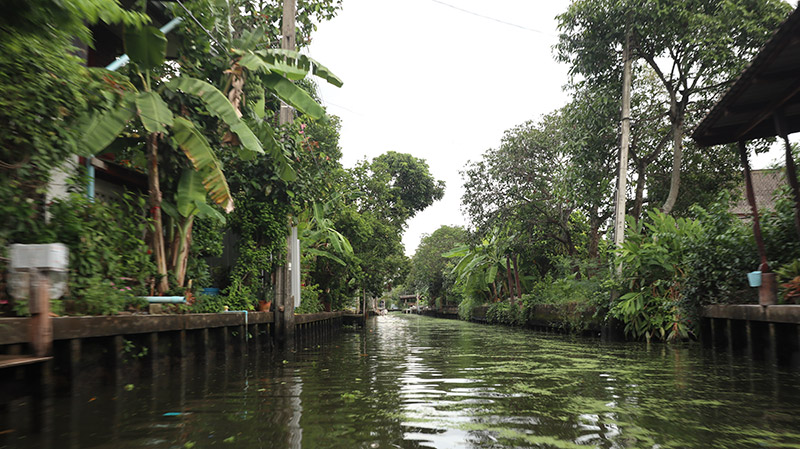 On the banks of a canal of the same name, Bangpratun, a small community in the district, is blessed with the bounties of  nature including several types of fruit and vegetables. Locals also produce exquisite wickerwork.

Villagers of the community used to practice an interesting tradition called “mua kung” (mua meaning unclear, and kung meaning prawns). According to the late Somjai Nimlek, a native of Bangpratun who was an associate professor of architecture at Silpakorn University, mua kung was a communal practice where villagers would help neighbors with tasks like “fish shocking” and harvesting canal creatures such as prawns and fish.

The shocking technique used in local fishing was not done with electricity, but with the locals’ homegrown wisdom by stirring up the silt and mud at the bottom of the canal to muddy the water and create conditions that place fish under stress. Among other things, the muddy water caused oxygen levels to drop temporarily, “shocking” the fish and other aquatic creatures as a result.

On the day of mua kung, villagers would gather together on the banks or in the boats at low tide either during the day or at night, armed with fishing nets and hand scoops. In the lead-up to the day, they would spend time fixing their gear including boats, fishing nets and lanterns. 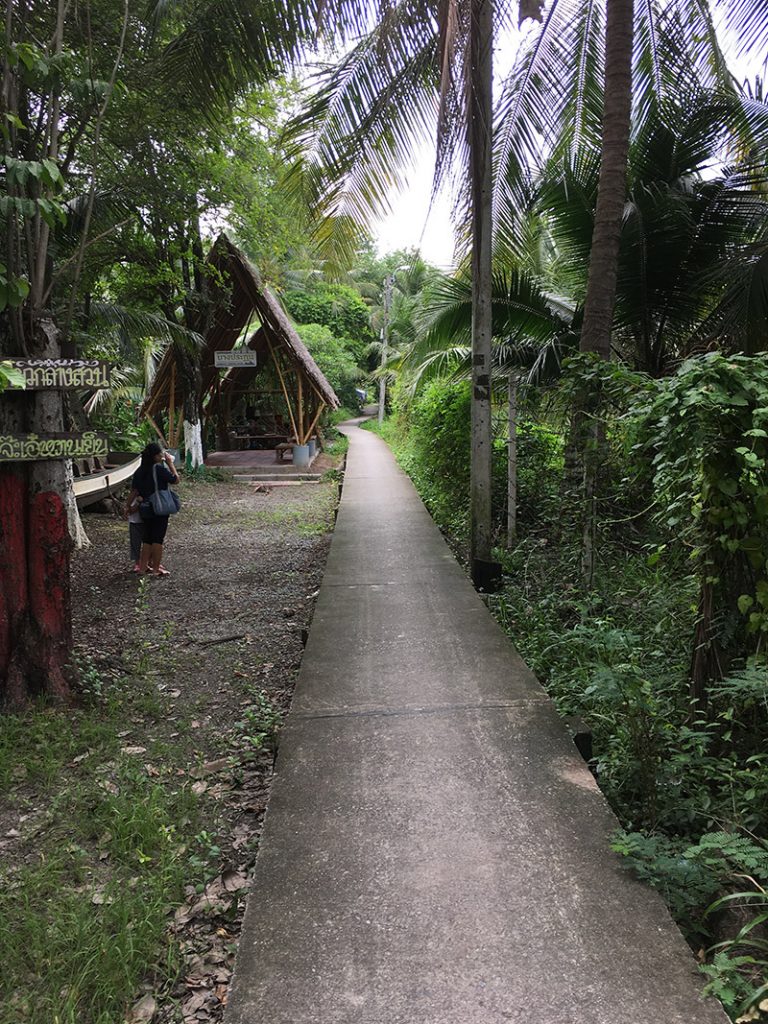 Back then, the Bangpratun canal was lined with tall trees on both sides, their branches meeting halfway over the canal forming an arch of dense green foliage or a dark green tunnel. At nighttime, the gleam of moonlight could not filter through the thick foliage, so lanterns helped light up the path ahead. When ready, the villagers would gather at a meeting spot to calculate the time and distance to shock the fish before the high tide. They would normally start at the upstream end of the canal where people who were in charge of stirring up the mud would dive into the water with a paddle in hand. The murky part of the canal would flow downstream at low tide. Once the water got murky, the prawns and fish would start to come up to the water surface gasping for air, and harvesting would begin in earnest.

Those stationed on the boats would scoop them up by the bucketful with scoop nets. Locals living on the canal would automatically pitch in upon spotting mua kung boats passing by their homes.

On each mission, around 200 boats equipped with lanterns engaged in the mua kung, heading slowly downstream under the tree tunnel like a glittering array of stars on a moonless night.

When the muddy waters became stagnant and cleared up, the villagers will realize that the tide was turning and the canal circus will ground to a halt.

With mission accomplished, They would head home to start work on preserving the day’s catch. Without any refrigerators back then, the fish and prawns were grilled, smoked, braised, boiled, dried, salted, or sweetened – in much fancier ways than my grandmother’s.

Sadly, this tradition has completely disappeared along with Bangkok’s clean and clear waterways. The Bangpratun community itself is presently inaccessible by road as it is now surrounded by housing estates, big commercial buildings, and highways. Waste releases and raw sewage from factories and housing estates are dumped directly into the canal. The fish  and residents are feeling the effects of water pollution.

Raising public awareness of the impact of toxic waste on the Bangpratun community is definitely the way to go, but that alone wouldn’t be adequate in safeguarding the community and its colorful traditions against these threats. Unless we take action, these traditions and ways of life would soon disappear along with the previous generation who enjoyed them.