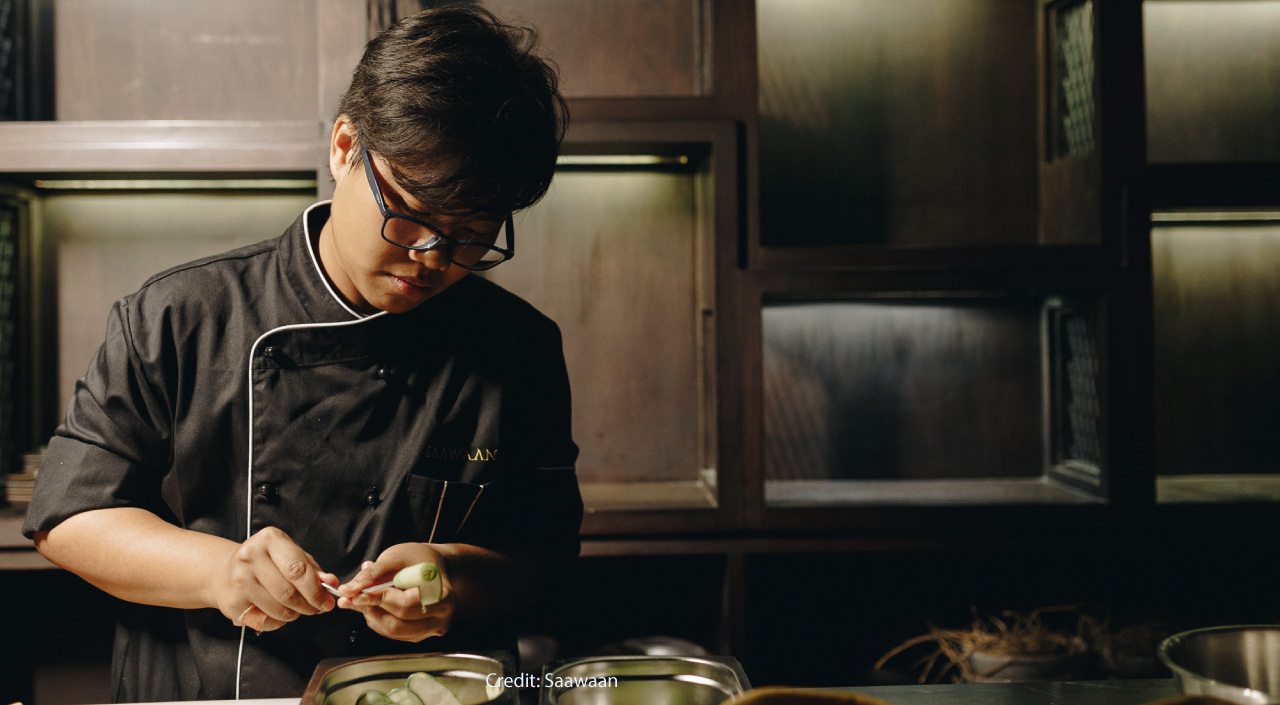 Saawaan – A Slice of Heaven

W hile the job of a food critic might sound appealing, at times it leaves plenty to be desired. Often an exercise in excess, the fine dining, fine wines, and quite often pretentious food or surroundings leave one hankering for a bowl of noodles on the street. Thus, it is all the more wonderful when a truly special restaurant rears its head, and a recent trip to Saawaan reminded me that there really are some eateries in Bangkok that get absolutely everything 100% right, and also lets me know that I am living in the world’s greatest foodie nirvana on the planet.

Saawaan, which means “heaven” in Thai is most aptly named. Chef Sujira “Aom” Pongmorn heads the well-trained kitchen team here, who expertly show off the best of all Thai cooking concepts in an intimate fine dining establishment. Chef Sujira has a stellar track record when it comes to creative cooking, with stints at the Mandarin Oriental, Sra Bua, Issaya Siamese, and House on Sathorn in her repertoire, basically a list of some of the best dining establishments in Bangkok.

More recently, she was the face behind Baan Phadthai, which elevated humble pad thai to royal status and even received a Michelin Bib Gourmand award for her efforts. Today, Chef Sujira has fulfilled her dream to run a Thai restaurant that has taken all the elements of street food and Thai cuisine as a whole, and turned them into exquisitely presented mouthwatering delights, and she and Saawaan have been awarded a Michelin star by the recent second edition of the Michelin Guide Bangkok for her extraordinary talents. 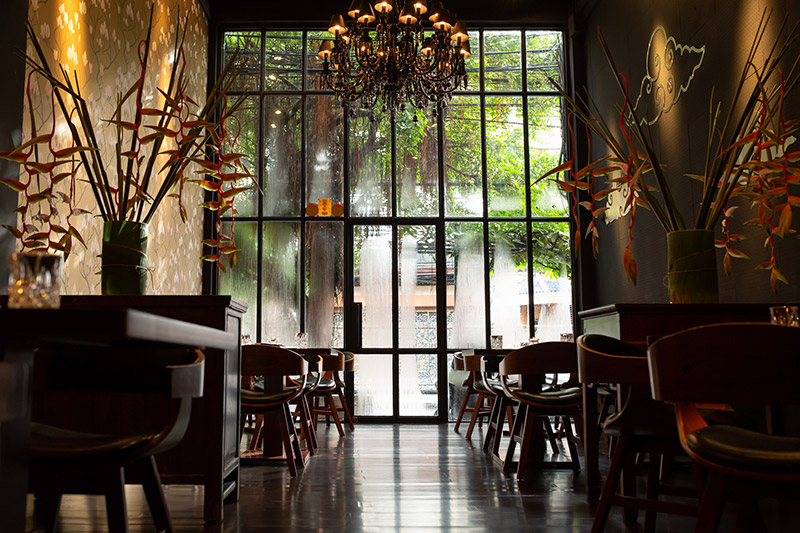 Saawaan welcomes its guests with a dimly-lit interior that features dark tones, hanging chandeliers, and golden cloud decorations on the walls, perhaps symbolizing just how close to heaven you are about to get. There are just 24 seats here, set back from a small open counter from which the chef and her team work from.

From the outside, the large windows display what looks like a very inviting shophouse restaurant, albeit a bit more elegant than the norm, but the Suan Plu neighborhood is known for its chic eateries these days. The restaurant’s Michelin plaque is  tucked away over the back counter, so those not in the know just walking in are often surprised to see there is just a ten-course tasting menu, yet if they choose to walk away, they don’t know what they are missing. 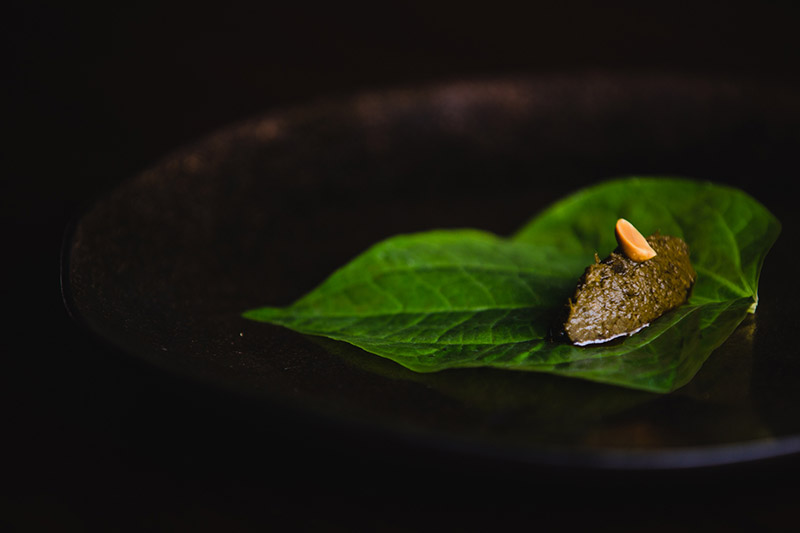 The tasting menu at Saawaan is based on the entire repertoire of Thai cooking techniques and ingredients. The dishes come out in the order of “raw, dipped, fermented, boiled, steamed, stir fried, charcoal (grilled), and curry,” along with a traditional “miang” leaf-wrapped snack as well as dessert to finish up with. 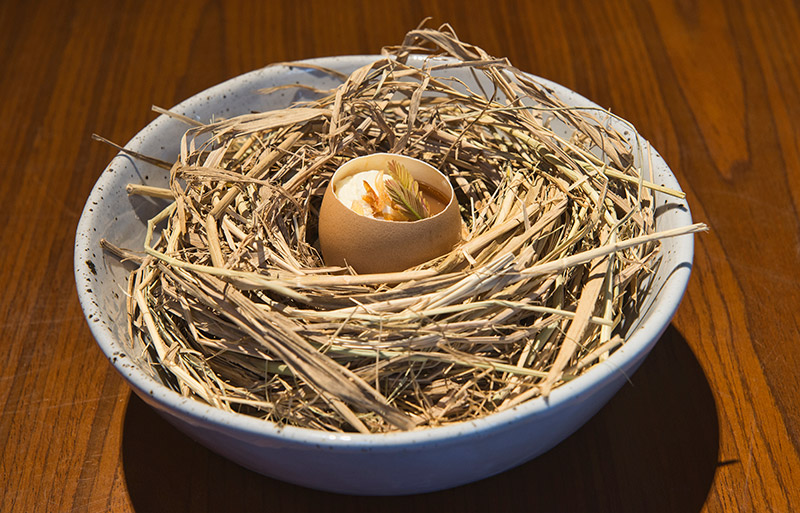 The opening dish, which isn’t even on the menu, lets you know exactly what lies ahead, as the presentation, in what looks like a bird’s nest, is astounding. The dish is an amuse-bouche “kai luk koei,” a sous vide egg served with cream, tamarind sauce and chili oil. It’s small and delicate, but you stir up the ingredients inside and are hit with an overpoweringly wonderful combination of tart, creamy, and bold flavor once you spoon out a bite.

Up next, servers bring out raw amberjack fish, which they expertly pound right at your table, all the while explaining the ten different Thai herbs and flavorings, from toasted sticky rice powder to kaffir lime leaves to chilies that they mix the fish with, leaving a wonderfully aromatic and delectable salad.

The next course, the dip, was even more sublime. This dish comes from rural Thailand, where farmers would make grilled paddy crab fat into a “nam prik” chili dip and eat it with sticky rice. Here, Chef Sujira has mixed the paddy crab fat with Thai herbs and grilled them in the crab shell, and it gets served with coconut steamed sticky rice. 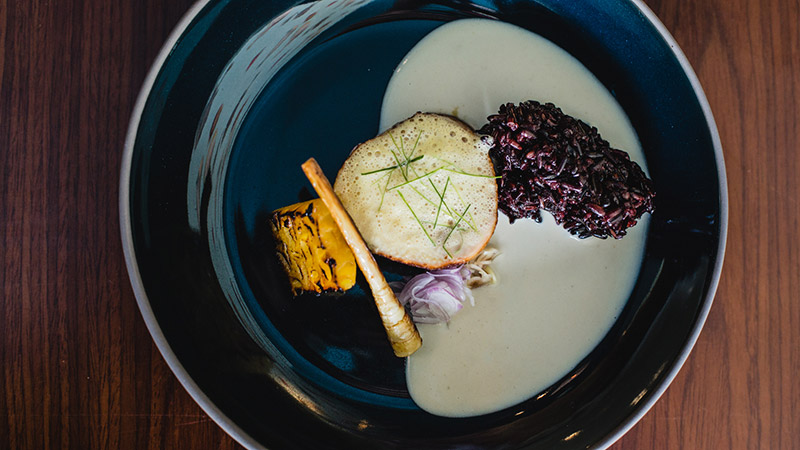 Everything served at Saawaan is a winner, but there were a few unbelievable standouts during our meal. The “gai kati khao luem pua” takes free-range Nakhon Pathom chicken, flavors it with a Thai curry sauce, and it comes served with pineapple and bamboo shoot, alongside of what is known as the “forget the husband” rice, so called because the rice is so good that the housewife serving it would forget that her husband was also at the dinner table while she was eating it!

Also, of note was the “boiled” selection, which was a “tom klong” soup made with Jean-Paul oysters, Shimeji mushrooms, palm heart, and smoked fish, along with the usual piquant chili, tamarind juice, and galangal that gives this soup such a punch. Spices weren’t toned down on this either, something nice to see at a Bangkok restaurant in which plenty of foreign guests venture into.

Along with probably the best selection of wine pairings I’ve experienced anywhere in Bangkok (you can also opt for fancy tea pairings if you don’t want to imbibe), you’re pretty much going to be well-sated at the end of a meal here, but do leave room for dessert.

Working alongside Chef Sujira is Chef Arisara “Papier” Chongphanitkul, the pastry chef extraordinaire from Issaya Siamese, graduate of the Gastronomicom culinary school in France, and the face behind the new Ici patisserie, who lends her sweet-tooth abilities to the team here, creating a wonderful custard made with Thong Ampai pumpkin puree and coconut milk, as well as a closing tray of petit fours, that featured a som saa tart and durian-flavored chocolate to make a final imprint on your palate.

For the chance to sample totally authentic and creative Thai cuisine in an intimate fine dining venue from one of the country’s leading chefs, Saawaan exceeds beyond all expectations. You’ll truly find a slice of heaven in this most deserving Michelin-awarded establishment.