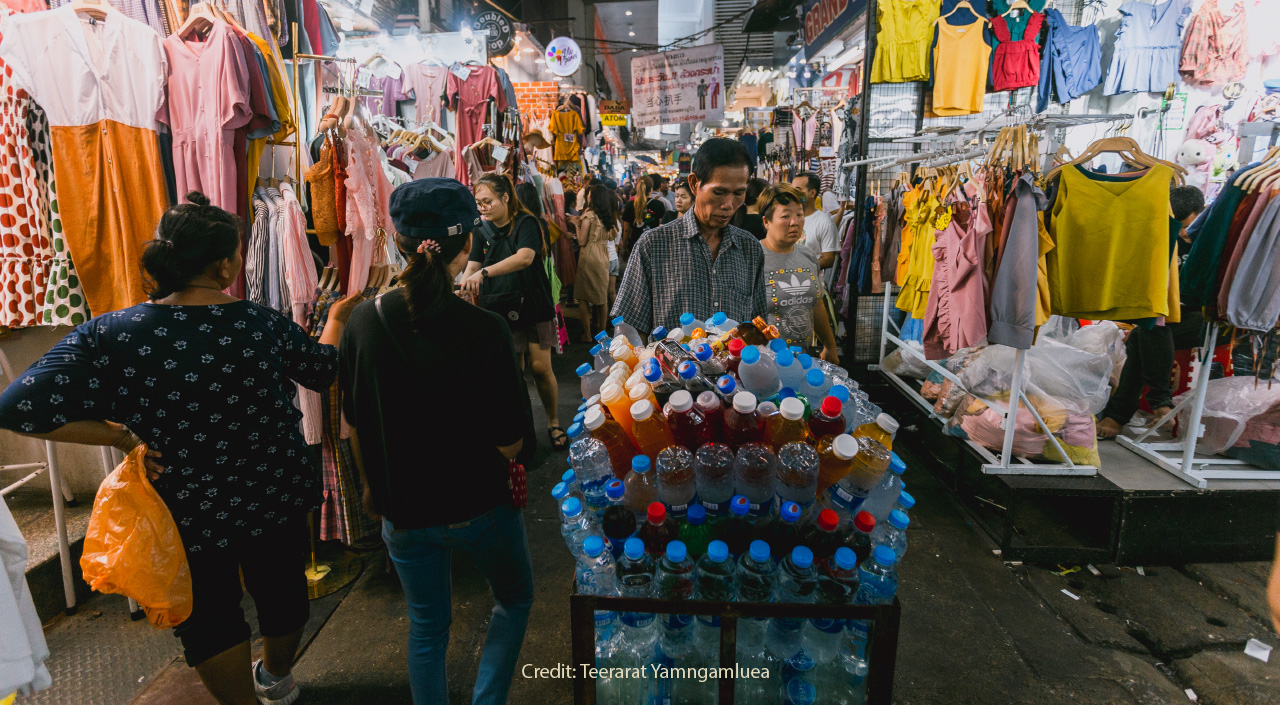 Nestling under the imposing structures of Baiyoke Tower I & II, two of Thailand’s tallest buildings, is Pratunam Market, which is not only a market, but the largest clothing venue of its type in the country. Pratunam in Thai means “water gate” and geographically it covers the areas of Victory Monument, Makkasan and Ratchatewi in the city.

The market itself evolved from the southern boundary of Pratunam bordered by the Saen Saep canal. The canal was dug during the reign of King Nangklao (Rama III) in the mid-nineteenth century to connect the Chao Phraya river with the Bang Pakong river to the east and then the subsequent linking Saen Saep to two other canals. A gate was needed to control the water levels between all three, hence the construction of “Pratunam.”

Where there was once a focus on local fresh produce, the market has developed over the years to become a clothing cornucopia. Its sprawling nature means there is easy access from a number of directions and transportation points. It is located on the intersection between Phetchaburi and Ratchaprarop roads. Get off at Ratchatewi BTS Station and it is only a 15-minute walk to the center of the market.

You can also take a canal boat to the Saen Saep terminal and you will be only a few minutes away from the market. Alight at Pratunam Pier and follow the crowds. Many buses also operate in the area and pass the various market entrances. It is officially open 24 hours but retail shops will trade from around 10am-9pm. 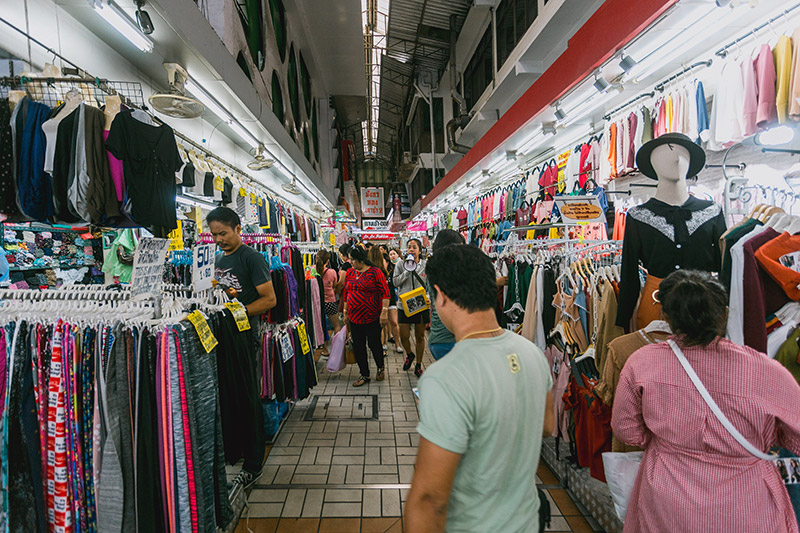 Although it is a wholesale market and prices are generally very cheap, vendors will usually be amenable to sell single pieces. I have been here on numerous occasions, yet I never fail to get lost in the wonderful maze of small alleys and crowded narrow streets packed with shoes and fashion accessories as well as clothes.

A true kaleidoscope of colors and a vibrant atmosphere with merchants clattering noisily on their venerable sewing machines, orders being packed and unpacked and trolleys pushing through the mix of locals and tourists in the tight aisles. Here is a trip back into how shopping used to be, prior to the sometimes anodyne air-conditioned and repetitively similar modern shopping malls which abound elsewhere in Bangkok. 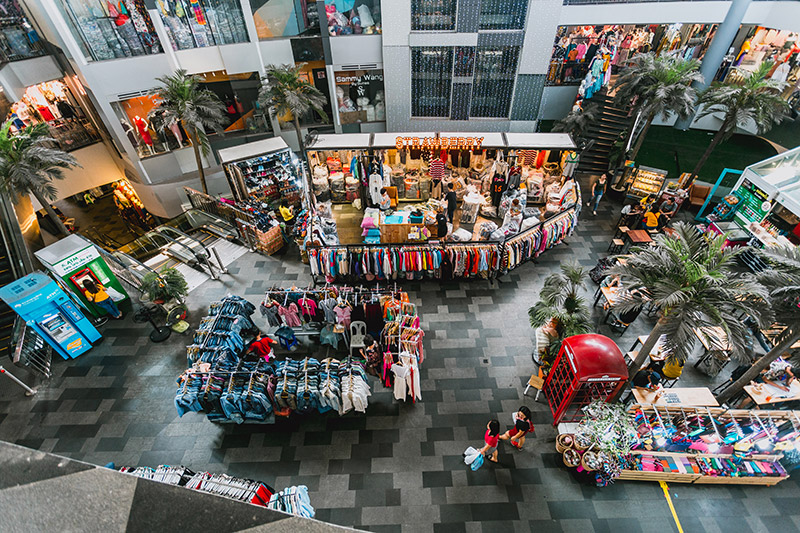 I would defy anyone not to find something of interest here. Think every type of clothing from shorts, T-shirts, formal evening dresses, winter jackets, suits, swimwear, to more bizarre outfits and everything you need for a fancy-dress party. There are also many traditional Thai-style garments, too. As you walk, savor the rich diversity of embroidered costumes, feathers, sequins, beads, stylish, crazy and funky hats, bags and shoes, patterns and styles in a veritable rainbow of hues.

Some points to note when buying though. There is no exchange or refund or trying on items. When your eyes light up at the sight of brand-name goods, expect them at best to be copies. It is very cramped and can get very stuffy, so bring some drinking water or even a battery-operated fan. Wear light clothes and I would not recommend dragging young children around. Felines also seem to be everywhere, so much so I almost want to call the market “Catunam.” As with most markets, some knowledge of Thai can help and do not be shy to haggle with the vendors. 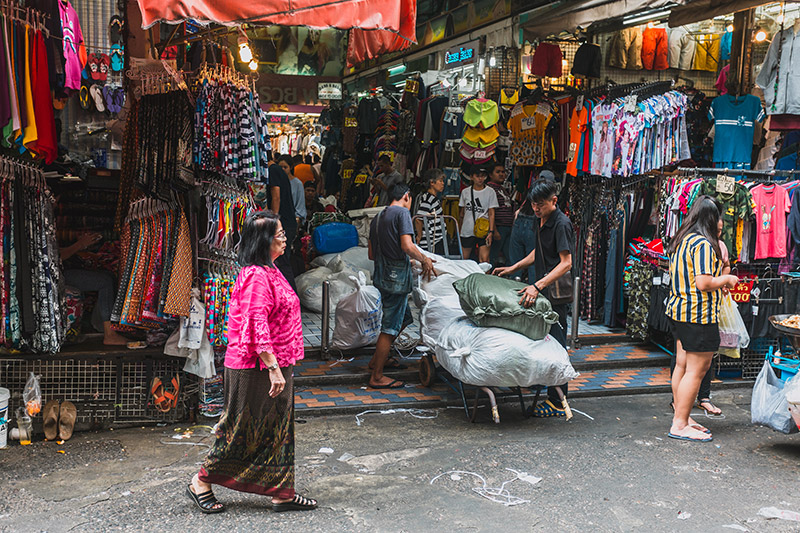 Pratunam market has a different atmosphere early morning as the locals arrive to do their wholesale shopping. Proceedings are much calmer and more business-like until around 8am when the tourists arrive and the environment becomes more chaotic. The mood changes again in the evening with the night version. There are really great vibes with the streets around the nearby Palladium World Shopping complex crammed with a myriad of stalls selling clothes and souvenirs. Scores of food sellers offer tasty treats for visitors, too.

For fashionistas this is a recommended market of unique appeal and charm. It is certainly a place to immerse yourself in an authentic Thai shopping experience! 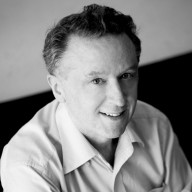 Born in England, Christopher Scott Dixon is an experienced writer and ex-BBC radio reporter/presenter. He has contributed many features to a variety of publications in Thailand and in the UK. He has also written 18 books across different genres and is a qualified teacher.