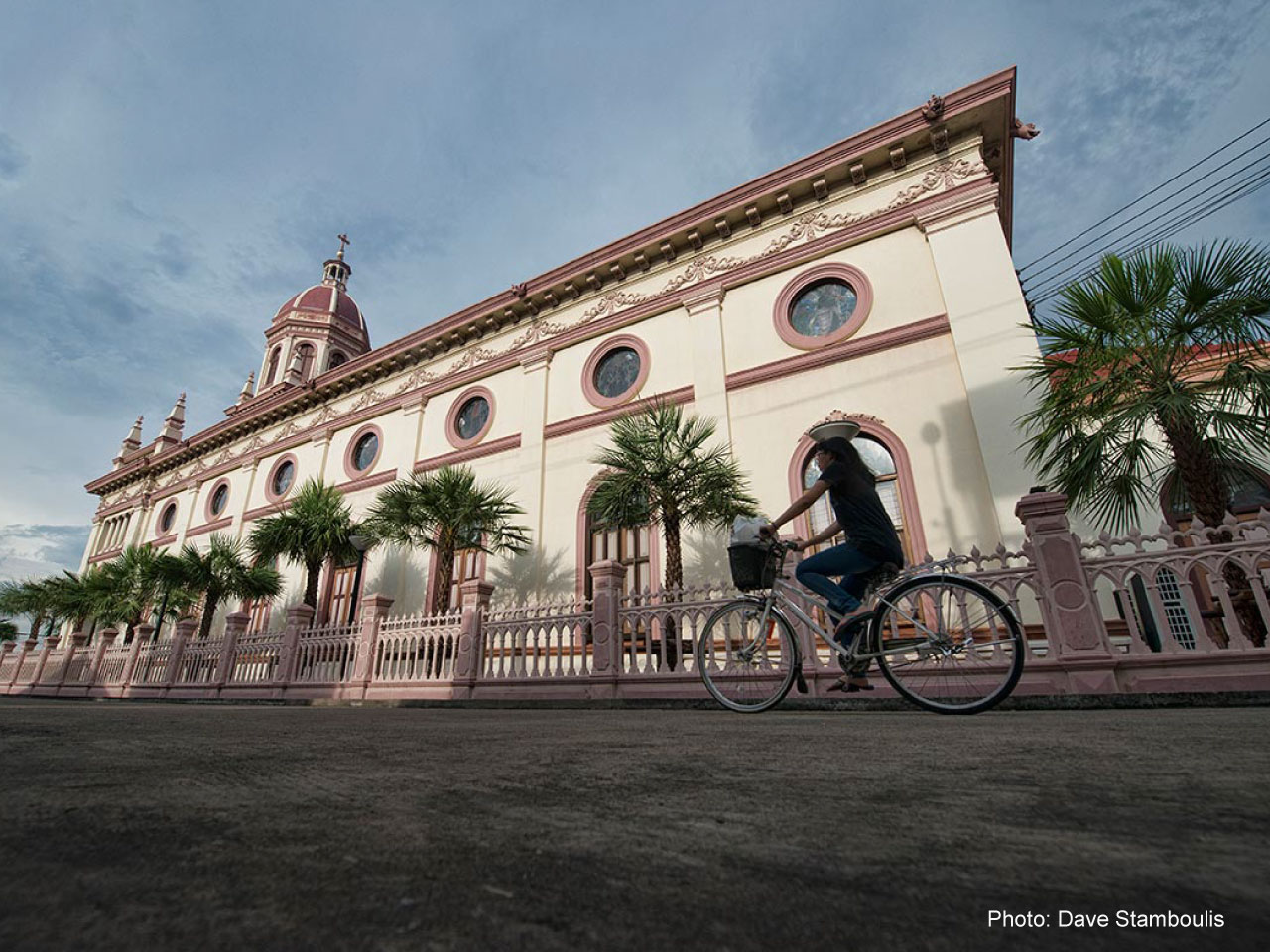 While Bangkok has changed immeasurably over the years, it still is of comfort to those who like the way it used to be to get away from the Skytrain, endless community malls, and constant new development, and discover still remaining bits of the Bangkok of old. One such spot lies just across the Chao Phraya on the Thonburi side, and the Church of Santa Cruz, while not necessarily attracting to much more than a glance from passersby, actually has quite a historical legacy, home to an age old community, and well worth a visit into the Bangkok of yesteryear.

During the 1500s, the first farang set foot in Thailand, known as Siam in those times. Portuguese adventurers made their way to the kingdom from Europe, and settled in Ayutthaya, trading arms for textiles, as well as being able to settle and practice Catholicism. Two centuries, later, the Burmese sacked Ayutthaya, and Thailand’s ancient capital was subsequently moved to Thonburi. King Thaksin, supportive of the Portuguese, granted them a plot of land on the Chao Phraya where they could start a new community.

In 1769, the Church of Santa Cruz was built, with plenty of assistance from the local Chinese community in helping to renovate it, even giving some Chinese architectural touches. In light of this, locals called the church Kudi Jin, “the Chinese church,” a name that has stuck with Santa Cruz until this day, and is the name of the surrounding community as well. The church was renovated again in the early 1900s, by the slew of Italian architects who were in residence in Bangkok at the time, designing other European styled masterpieces like the old Phraya Palazzo, now a boutique hotel located further up the river. 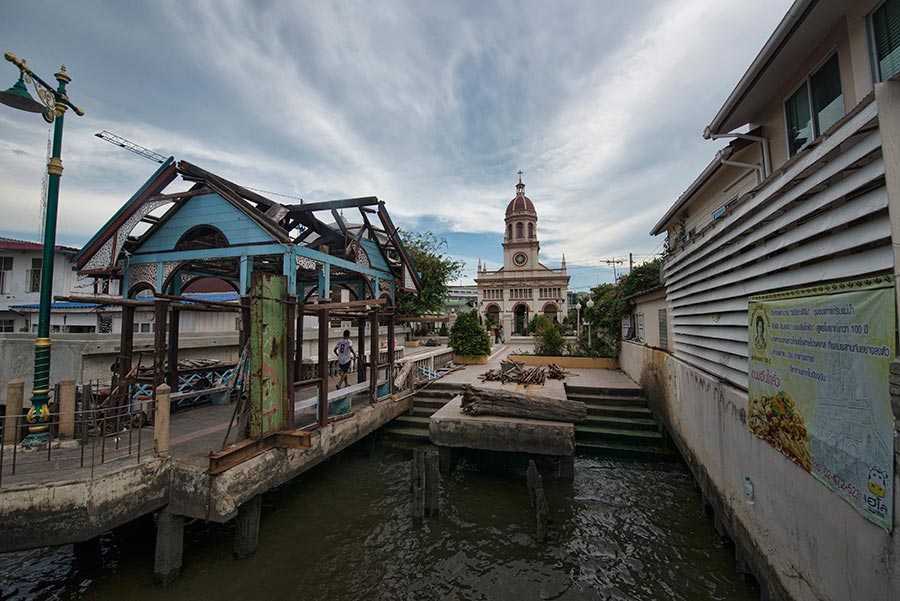 Today, the neighborhood is home to a Thai-Catholic community, with a multicultural school, community center, and set on a series of tiny narrow lanes that sit above canals and river backwater, featuring old wooden teak homes, some caring art murals, a newly opened museum cafe, and even a longstanding Portuguese bakery making traditional snacks.

It’s quite a juxtaposition between the open Italian-style piazza church square and the narrow winding alleyways of the adjoining community. With minimal traffic, the square now serves as a place for residents to jog, ride bicycles, and walk around the church, while old timers sit on the park benches and watch the world go by, a scene that would be replicated at any church square in Lisbon. 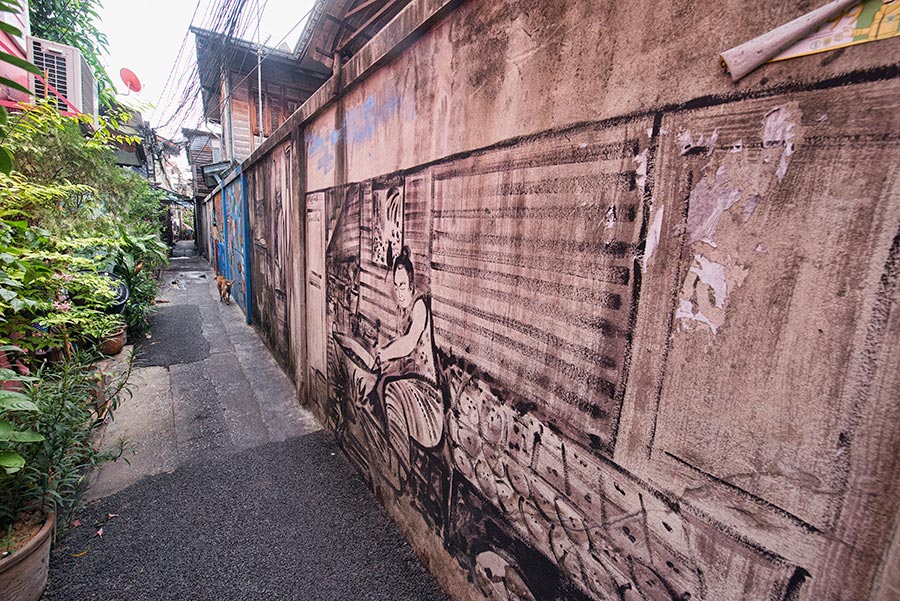 The tiny sois branching off from the square are typical Thonburi, with plenty of dead ends, haphazard power cables strung from above, and little shops set up in residents’ living rooms that open to the street. There’s a bit more color here though, as locals have painted and sketched some creative murals to give the winding passages some flavor, and looking back down the passageway, the Santa Cruz dome towers above the power wires. People here still live in seemingly ramshackle half-falling-down wooden homes, similar to elsewhere along the canals of Bangkok, yet here they have Jesus portraits hanging in the entryways, and Mary doorknockers outside.

The Baan Kudi Jin Museum is a new addition to the neighborhood. A smart looking and inviting home with an open courtyard that seeks to showcase some of the history here, as well as capitalize on the recent influx of local tourists that are discovering the traditional part of Bangkok. While its exhibits are rather sparse at the moment, the cafe inside is a lovely spot, and makes for an excellent pit stop while wandering around here.

Not nearly as fancy or inviting, yet far more atmospheric, plunge even further into the tiny alley around the corner and one arrives at Thanusingha, a hole in the wall bakery, where the same family has been baking traditional Portuguese cakes for five generations. The recipe for kanom farang kudi jin has been around for about 400 years, combining wheat flour, egg, raisins, and sugar, without using yeast, to create a sponge-like cross between a muffin and a cookie that is taken with tea or coffee. 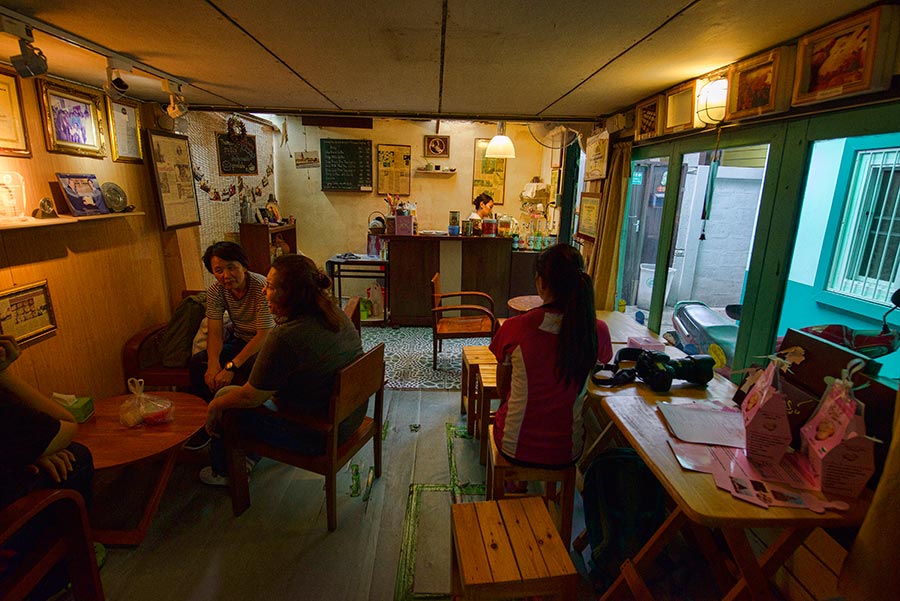 Only three families in the neighborhood now bake the snacks, and Thanusingha is the only place where one can actually enjoy one while sitting down inside the old and tiny house, where the front section has been converted into a cozy sit down cafe. They also do a mean cup of strong Thai milk tea here, and one can enjoy some tea, cocoa, and watch the cakes coming out of the kitchen and getting packaged into attractive take out souvenir packs at the same time.

It’s quite novel to see an old area of Bangkok still so integrated and strong, and while the church itself is only open to the public on Sunday morning and evening when there are services, the exterior is still quite picturesque, and worth a look at any time. The church fronts the river, and there is even a boat pier right outside, although this is no longer used, as the cross river ferry now stops just five minutes up the way at Wat Kalyanamit.

It’s also of interest to note how multicultural this neighborhood was. Wat Kalayanamit is practically right next door, as is the Kuan An Keng Chinese shrine. Additionally, the Ton Son Mosque is just up the road, and also dates back from the 1700s, showing that Buddhists, Muslims, and Christians all lived in harmony in Bangkok several hundred years ago.

It’s an easy day trip to make to sample this historical bit of Bangkok. The best way to get here is to take the Chao Phraya River ferry to the Yodpiman Riverwalk pier, and then walk up river through the Yodpiman complex a few minutes to the Pak Khlong Talat pier, where you can catch a cross river ferry to the Kalayanamitr Pier across the way. Santa Cruz church is visible from everywhere on this route, so you’ll have no trouble finding it. From the church, it is a further 10-15 minutes north to Wat Arun, so you can throw that into a tourist outing as well.