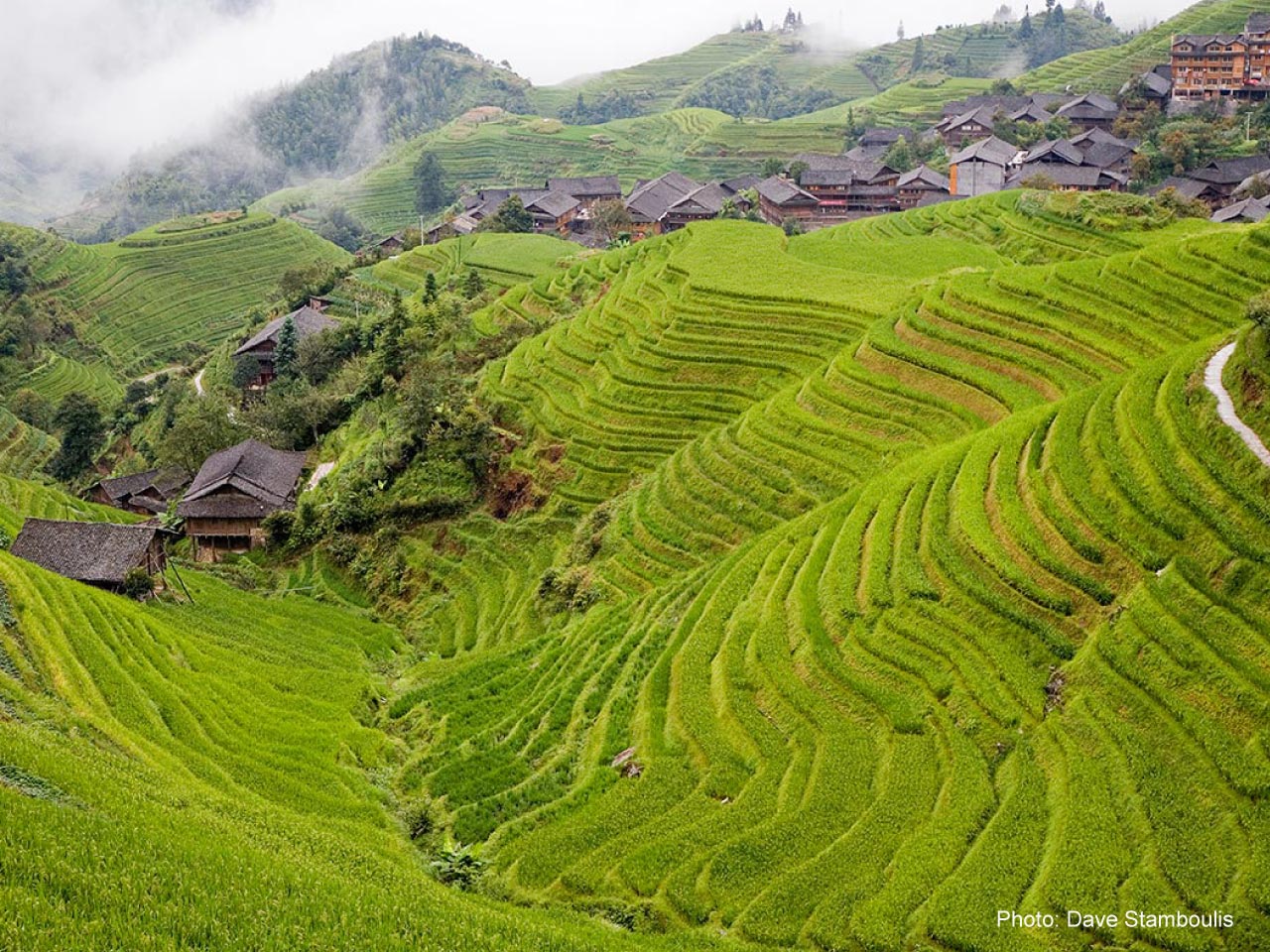 Between the River and the Mountains

I am always looking for places to escape to from Bangkok that offer a serene and unique travel experience, hopefully one that is radically different from the geography and culture here at home, yet at the same time not involving multiple time zones and having to suffer through jet lag. When I saw that there were direct flights from Bangkok to China’s Guilin, and that they only took three hours, I jumped on the chance to make a quick trip, heady at the thought of getting lost amidst the jagged limestone mountains and hanging rice terrace landscape that I’d so often seen in photo books.

Guilin is one of China’s greenest and most pleasant cities, the capital of Guangxi Zhuang Autonomous Region, set on a series of connecting lakes, and surrounded by phenomenal karst topography, with hundreds of vertical limestone peaks jutting up across the horizon. While the city itself is an easy place to spend a few relaxing days, wandering along the lakes and in the abundant city parks festooned with traditional stone arch bridges and tall pagodas, the real appeal of a visit here lies outside of town.

My girlfriend and I started our recent journey here with a visit to the ancient village of Xingping, which lies along the famed Li River. Immortalised in Chinese poetry and song, the Li flows for around 500 kilometres, of which the 100 kilometre stretch from Guilin to Yangshuo takes in the most stunning scenery. The karst peaks, reminiscent of Halong Bay in Vietnam or around Krabi here in Thailand, are everywhere, poking up into the sky, their jungle clad walls plunging straight down into the whirling currents and eddies of the fast flowing Li below. The Li scenery is considered to be one of China’s most riveting attractions, so much so that even the Chinese 20 yuan note has a section of the river and mountains imprinted on its back side. 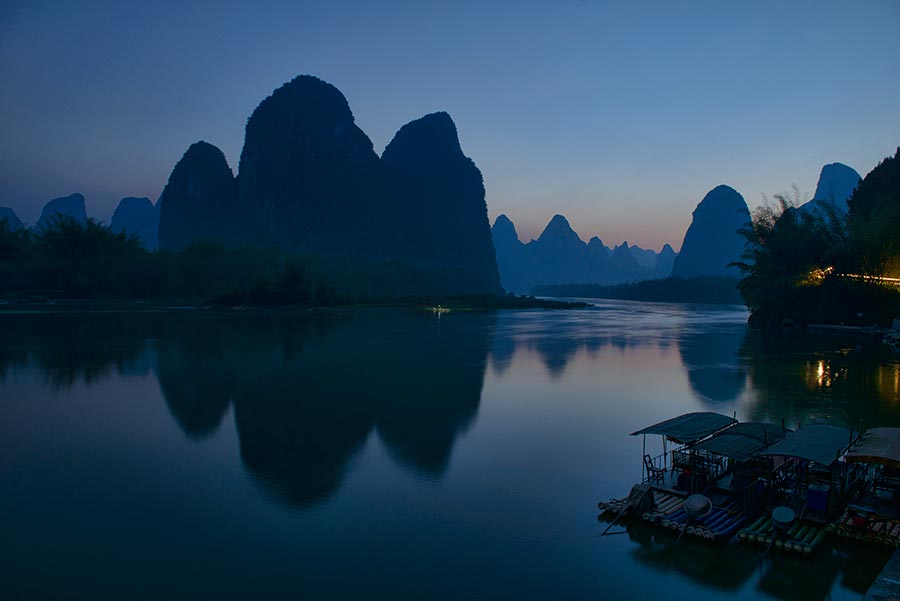 Boat trips, ranging from bamboo rafts to more luxurious cruise boats, are the most popular way to enjoy the sights, but for the more intrepid, renting a bicycle or navigating on foot is a far more interesting way to go. The banks of the Li have centuries old walking paths that traverse through orange groves and verdant farms, and paths wind their way up and through the limestone, even giving access to the summits of some of the sharp pinnacles, such as that of Xianggong Mountain, a peak that required us to bicycle for an hour and then carry our bikes up a rather precipitous mountain trail to reach the entrance to the peak, which it turned out, actually had a long and easy approach available by road. Never mind though, it made the views all the more stunning, watching the boat traffic on the Li below, with stone peaks standing like sentinels in the shadow of the sun, giving views more fit for birds than man.

There is also a stunning view over Xingping and the hundreds of mountains bathed in the setting sun’s orange glow right above the village, accessible via a steep mountain path that requires clambering up several vertical ladders near the summit, and scrambling out on to some rock overlooks more suited for the local goats. Needless to say, some world class rock climbing routes have emerged from this area in the last few years, and one could spend months wandering through the little visited backcountry here, which most of the package boat cruise crowd completely misses.

In addition to the mountains and rivers, this area is also noted for dazzling rice terraces, which tumble down from exquisitely sculpted fields that have been worked by the minority Yao and Zhuang people since the Yuan Dynasty in the mid 1200’s. Known as the Dragon’s Backbone rice terraces, the fields are breathtaking year round, although at their peak in late May, when they are irrigated for planting, or else in October, when they turn completely golden prior to harvest.

While the Chinese have built a ropeway cable car and made inroads into this gorgeous area, the best vantage points are still reserved for those who want to do it the old fashioned way, trekking on foot into the hills, and staying in large old wooden Yao houses, with creaky stairs, cozy rooms, and superlative views over the surroundings. The Yao here are famed for their women’s hair, which they never cut during their lifetime. Not only do they not cut their hair, but they even pick up any strands that fall to the ground, and save them to weave into their existing coifs. 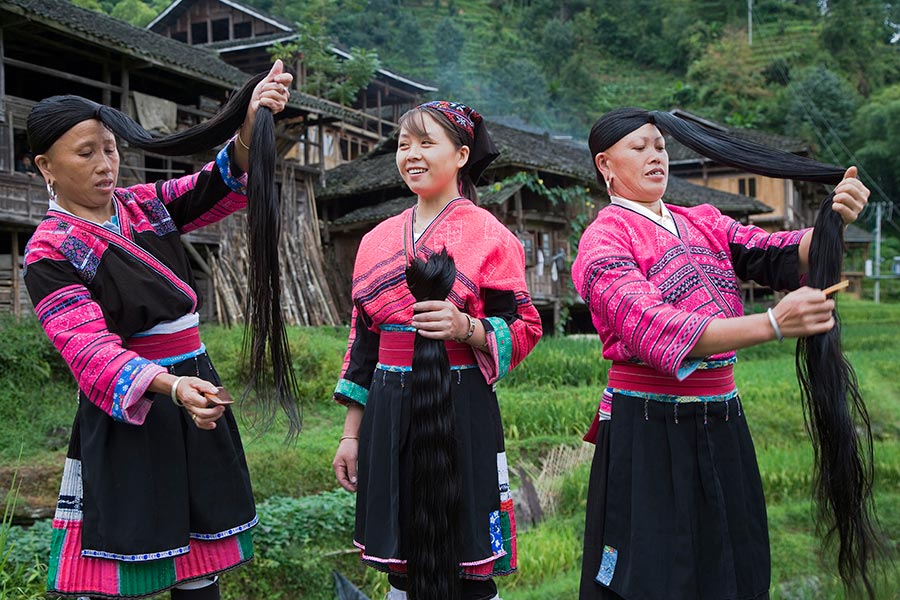 In their colorful hand-knitted dresses, the Yao add a vibrant cultural aspect to the magnificent scenery, and it is easy to spend several nights in different lodges here, hiking across the mountains to explore the different valleys and viewpoints by day, and chatting with the amiable Yao over local cuisine at night.

While one runs into the odd foreign tourist here, they are dwarfed by the domestic crowd. Chinese tourism has soared in the past years, and during Chinese New Year and the Autumn Moon Festival in the fall, lodges are bursting past capacity point and it is close to impossible to find a vacant room. 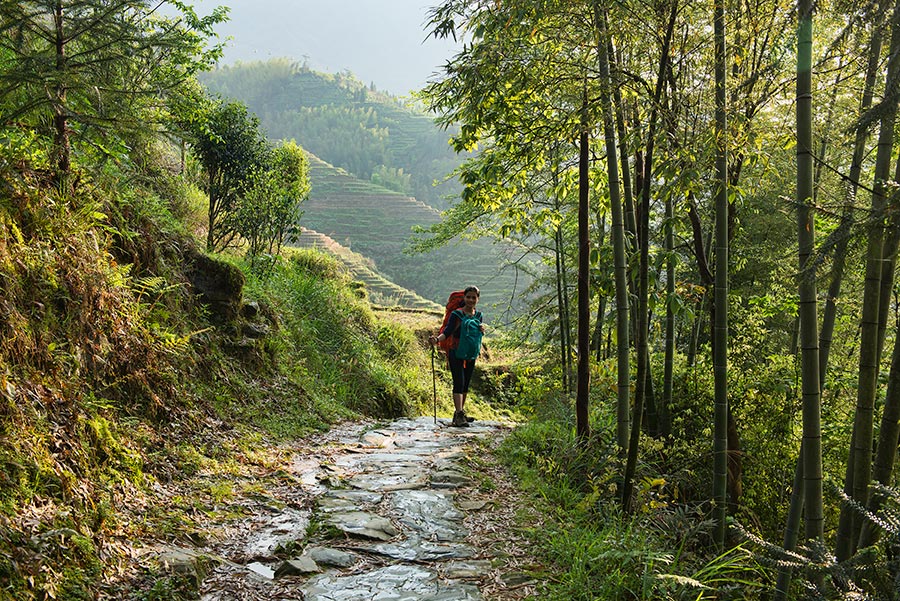 As we were coming out of the mountains from several days of trekking, we met several couples from Guangzhou, visiting here for the first time. They’d taken a high speed train from Guangzhou, arriving in Guilin in around three hours, and were then heading off on an ambitious crossing of several valleys over the course of three days.

One of the trekkers inquired as to where we were from and how we were enjoying the surroundings. He reminded me of the old Chinese saying that “the mountains and waters of Guilin are the best under heaven.” He added a few lines from the ancient poet Hanyu, who remarked that “the rivers look like blue silk ribbons and the mountains resemble emerald hairpins.”

I thought to myself that while there may be a few more conveniences, crowds, and concessions, much of Hanyu’s observations were still exactly the same.