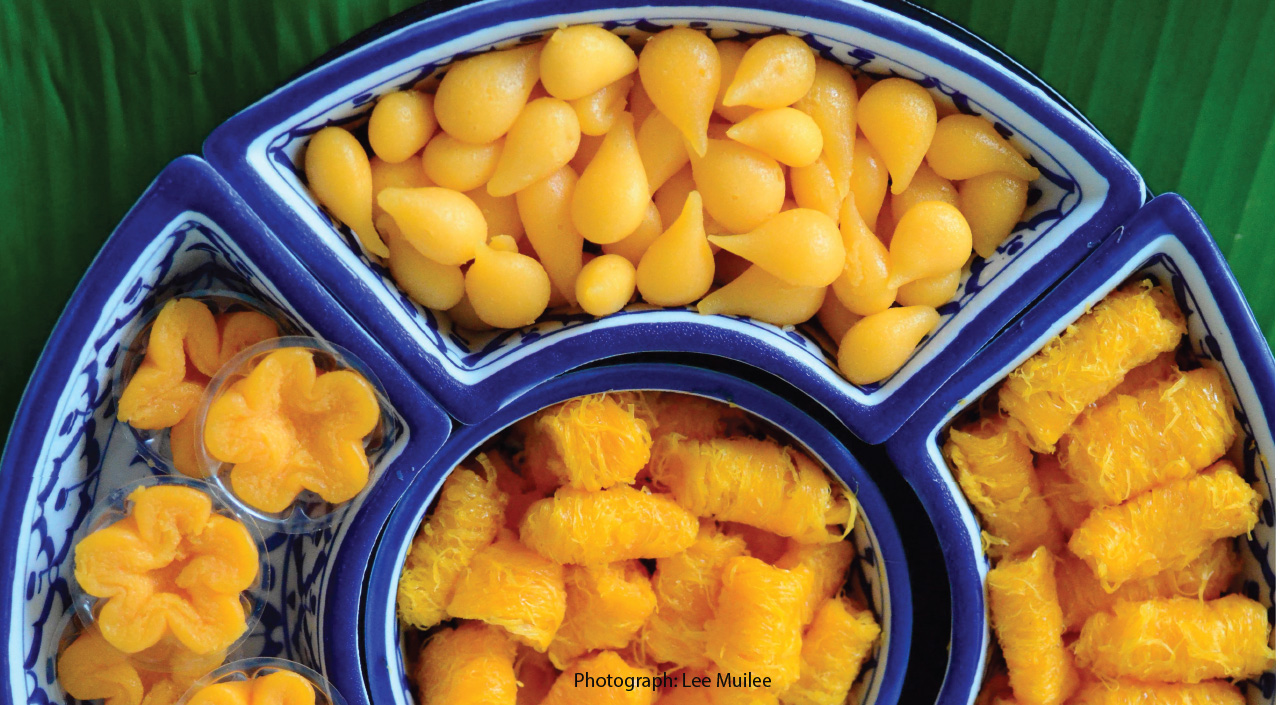 A few weeks ago, Thai TV soap opera fans had to say goodbye to their favorite period TV series BuppeSanNivas (Love Destiny), that shared with them a beautiful love story and sweet chapters of Thai history during the reign of King Narai the Great of the Ayutthaya Kingdom which dated back over 330 years. This was the same period when Louis XIV was the king of France.

Among many choices, Foi Thong, Thong Yip and Thong Yod are the most wellknown and of Portuguese origin. These three “amigos” are used as sweet treats to celebrate many auspicious occasions thanks to their scrumptious looks, vibrant golden color, and lucky names (thong meaning gold). They are still among Thais’ most favorite sweet treats.

As a culture enthusiast and true foodie who has a major sweet tooth, plus the fact that these three desserts have always been my favorite sweets since I was little, I couldn’t help but delve into their history even before the show was on the air. It’s no surprise to me that Foi Thong, the golden sweet threads, looks exactly the same as Fios de Ovos, the famous Portuguese sweet.

This starts to make more sense since Portugal was one of the first European nations in contact with Ayutthaya. Some ancestors of Marie Guimar, herself, were also Portuguese. So, it was very likely that this type of sweets may have had existed for many years even before she was born. However, I believe, thanks to her creativity, she did make these Portuguese desserts shine out and became popular among the Thais. She even made them unique and a bit different from the original Portuguese recipes. Here are some points to compare and contrast the Thai and Portuguese versions of these three sweet treats.

Similarities: These two desserts generally share the same ingredients. These includes egg yolks and syrup (white sugar and water). The cooking method is also similar: whisk the yolk nicely and slowly drizzle it in boiling syrup through a strainer or a pastry bag with a pointy tip in a circular motion. Once cooked, remove slowly and carefully onto a cooling tray. If not eaten by itself, Foi Thong will be used to garnish the top of a cake that is usually called Cake Foi Thong as in the Kanombueang crispy pancake. The Portuguese also use it the same way.

Differences: For the Thai version, sometimes we will use duck eggs for an even more vivid color and stronger thread. We can also add a bit of egg whites from the top part of the shells for the consistency of the threads while the Portuguese version goes for only chicken eggs. To give the syrup a sweet scent, we use jasmine water or essence and pandan leaves if we can find it while the Portuguese version would rely on vanilla extract.

Lastly, for the finishing touch and the display method of this dessert, Portuguese chefs tend to scoop Fios de Ovos from the saucepan or large wok altogether and let each thread place on top of each other, crumpling freely on a tray. Thai chefs would use a wooden stick or chopsticks to carefully swirl the threads from one side to the other in order to keep the threads together, pull them up altogether as one whole piece, and lay them on a cooling tray by folding halfway as a rectangular shape or even making a beautiful roll out of it.

Similarities: The ingredients of these two sweet dishes are again very similar to those of Foi Thong and Fios de Ovos. The difference is that in order to make Thong Yip or Trouxas das Ovos, you need to make sure the eggs are whisked until fluffy. Then once the syrup comes to the boil, you have to turn the heat down and drop a spoonful of the yolks slowly into the pan in a round or oval flat shape. Turn up the heat again to cook it. Turn it over after the bottom part is cooked.

Differences: The only difference I see among these two desserts of two nationalities is that for Trouxas das Ovos, the dessert is just folded in half like a small blanket, while Thong Yip is put into a small mold baking cup so that when it’s cold, it will stay in a flowered-like shape.

Similarities: The main ingredients of these two desserts are similar to the other four above. The only difference is that we now have to add some rice flour or all-purpose flour to the eggs and mix them well so that they are not runny anymore. For Thong Yod, you have to put the egg mix in a pastry bag or a small funnel, then use the tip of a spoon to sweep away the top part of the mix quickly and throw it into the boiling syrup. The cooked egg drops will float to the top of the wok. Ovos Moles de Aveiro, however, is made quite differently.

Differences: Ovos Moles de Aveiro have two main components: the shell and the filling. For the filling, Portuguese chefs will mix the egg yolks, syrup and flour together. For the shell, they will use flour, water and olive oil. Mix well, then paste the mixture onto baking molds of different shapes, such as seashells, stars or hearts. The shell should be very thin. Then they will add the filing onto the molds and bake them altogether in an oven. And voila, you will have very sweet and beautiful treat for your friends and family.

Despite some similarities and differences, the dessert dishes are still unique in their own ways. If I ever have an opportunity to visit Portugal, I will try to look for these three Portuguese desserts to fulfill my personal “Love Destiny” and to see whether they taste as good as their Thai counterparts.