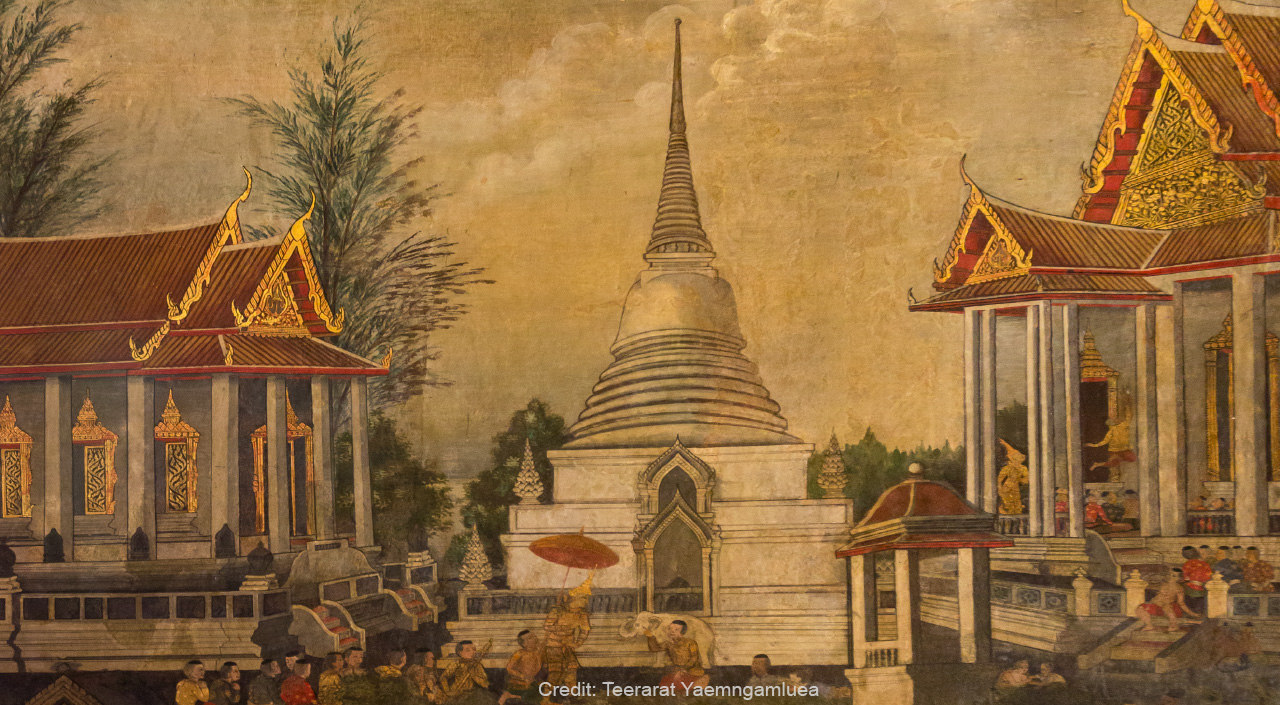 A Little Forest in the City

When it comes to a business area where people are crazy busy, the traffic is horrible, Siam Square would easily come to mind. The shopping paradise in Pathumwan district has remained Bangkok’s hippest neighborhood for decades. But not many people know that there’s a quiet little forest hidden in the heart of Siam Square on a patch of insanely valuable real estate nestled between Siam Paragon and CentralWorld.

Shopping aside, the area is steeped in history. Take a quick trip back in time to 1857, and you’ll find this area was a vast empty field on the eastern fringes of the city, part of the lush green countryside owned not only by villagers or farmers, but members of the Royal Family as well. In that same year, King Mongkut (Rama IV) decided to build a summer villa farther away from the Grand Palace as it was getting crowded and noisy.

Much to his delight, he found out this area was a perfect fit. The project began with the enlargement of the existing pond and by planting several kinds of trees and flowering plants, including water lilies and lotuses in the pond. The King also wanted to have a temple built near his summer home, so a monastery was founded and aptly named by himself Wat Pathumwanaram Ratchaworawihan, aka Wat Pathum, or the temple of lotuses. 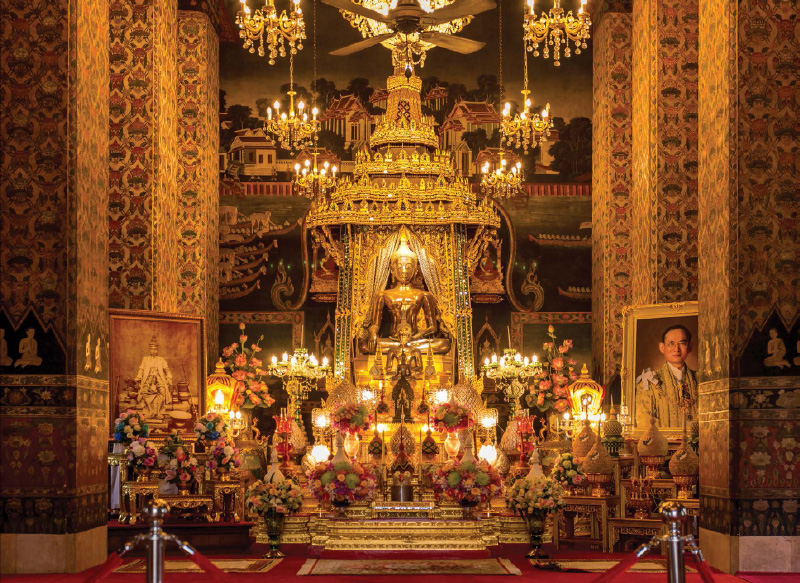 Phra Serm (the principal image) and Phra Saen (the smaller one seen in the lower tier) | Photo Credit: Teerarat Yaemngamluea

The King was deeply involved in the temple’s construction, with his personal preferences carefully integrated into the temple’s design. There is a pagoda located between the ordination and Buddha image halls in which three beautiful, northern-style Buddha images are enshrined. The former hall houses Phra Sai, while the latter building features Phra Serm and Phra Saen. 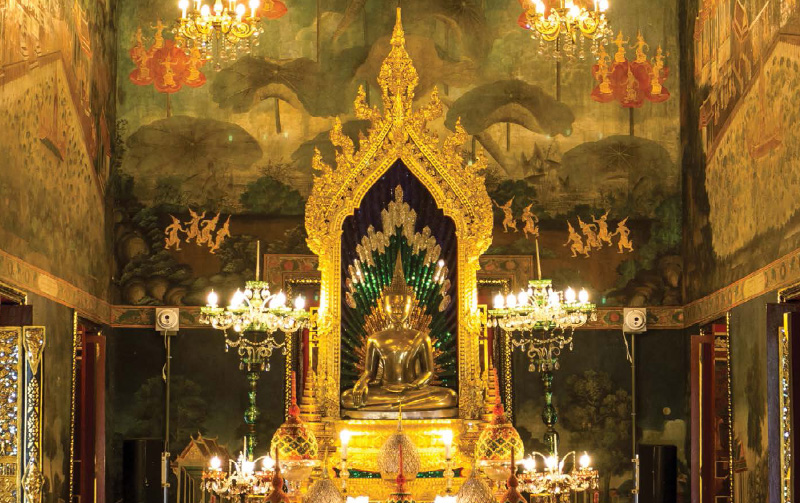 These Buddha images were brought to Siam from Lan Chang when this province of Laos came under Siamese rule and many Lao people from the province settled in Bangkok, especially Pathumwan district. By moving the sacred images to Bangkok, the king hoped his new subjects would be able to feel more at home.

These sacred Buddha images are believed to have supernatural powers. Whenever the country was hit by drought, Phra Serm would be brought outdoors to form a part of the rainmaking rituals. 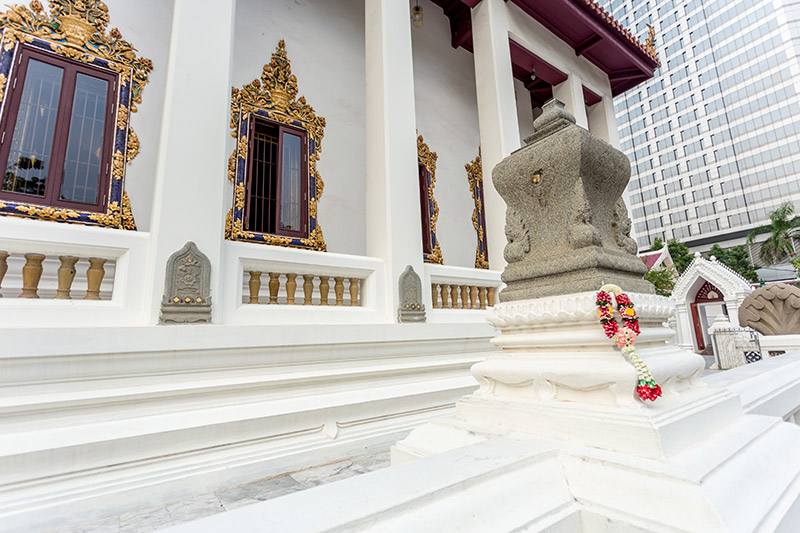 Sema slabs encrusted on the ordination hall’s columns and
a Sema-style capital on the outer layer of the boundary | Photo Credit: Teerarat Yaemngamluea

The ordination hall is considered the most sacred area in a Buddhist temple, and normally designated by boundary markers called Sema stones. The boundary stones surrounding Wat Pathum’s ordination hall are placed in a double-layer configuration.

Contrary to conventional design of other temples that has a single tier of carved Sema stone slabs to mark the boundary, Wat Pathum uses Sema-style capitals installed at the corners of the boundary’s first, or outer layer, and then has the ordination hall’s outer ring of columns encrusted with Sema slabs at their bases to create the second or inner layer.

The wooden door panel of the entrance features exquisite bas-relief artwork in gold leaf and colored glass, depicting the rustic charms of village life around the temple in years gone by such as farming and a small-scale freshwater fishery.

The murals of this building are also interesting. Normally, most temples would have Buddhist art portraying scenes from the Ten Jatakas of the Buddha (the ten birth tales of the Buddha). But here the mural paintings highlight episodes from the Thai folkloric tale “Srithanonchai” about a cunning, yet intelligent trickster who thrives on performing cons. 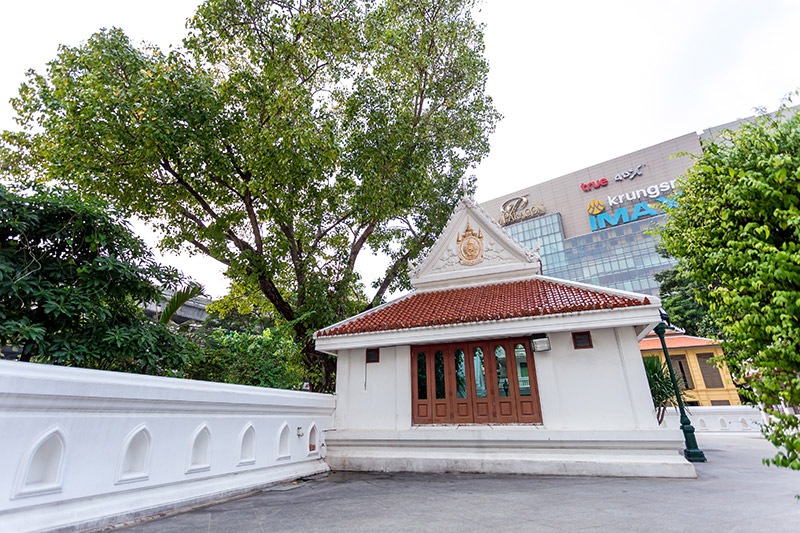 The dismantling hall with a royal insignia on its pediment | Photo Credit: Teerarat Yaemngamluea

Inside the temple compound there are several smaller buildings for various purposes. Of especial interest to visitors is a small building to the southeast of the ordination hall, its pediment bearing a royal insignia which indicates that this building was once used as a dismantling hall for the King. 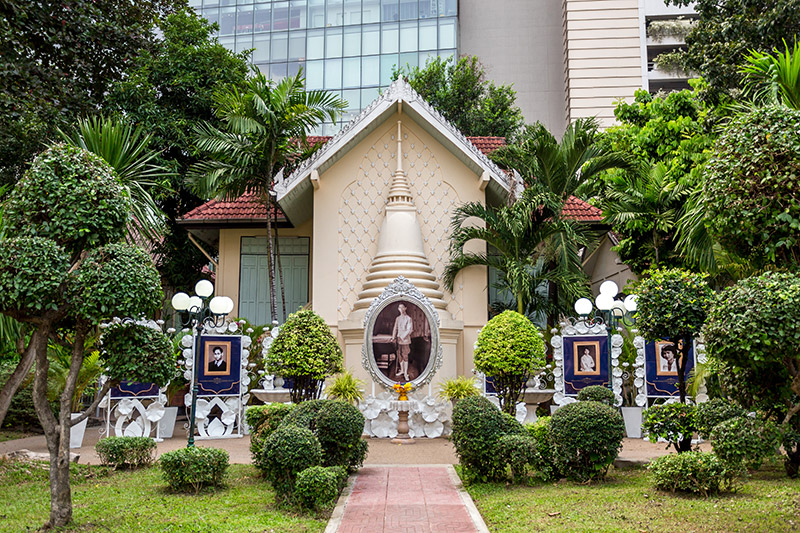 If you proceed to the west, toward Siam Paragon, you’ll see the House of Mahidol Memorial, a small monument to the royal Mahidol clan. King Rama VIII and King Rama IX, both from the Mahidol family lineage, inherited a vast tract of land in Pathumwan district on which to build their residence, or Sra Pathum Palace (literally “Lotus Pond Palace”), located near the temple. 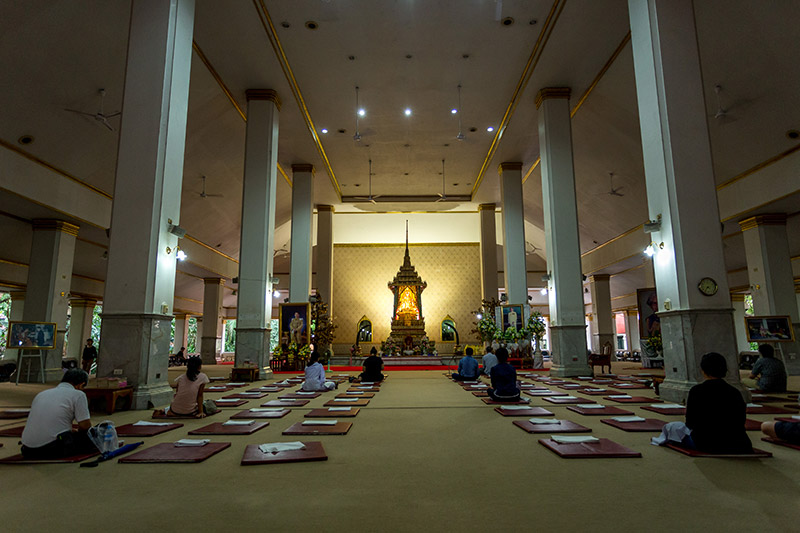 Wat Pathum’s meditation center | Credit: Teerarat YaemngamlueaThe trees, planted at that time, are still standing after more than a century. These towering full-grown trees provide a small tranquil oasis so conducive to meditation practice. The entrance to the meditation center is located to the northeast of the ordination hall and covered with dense green foliage that can be seen from afar. This pocket of greenery, a little forest if you like, is a place where you can find peace of mind amid the neighborhood’s total chaos. 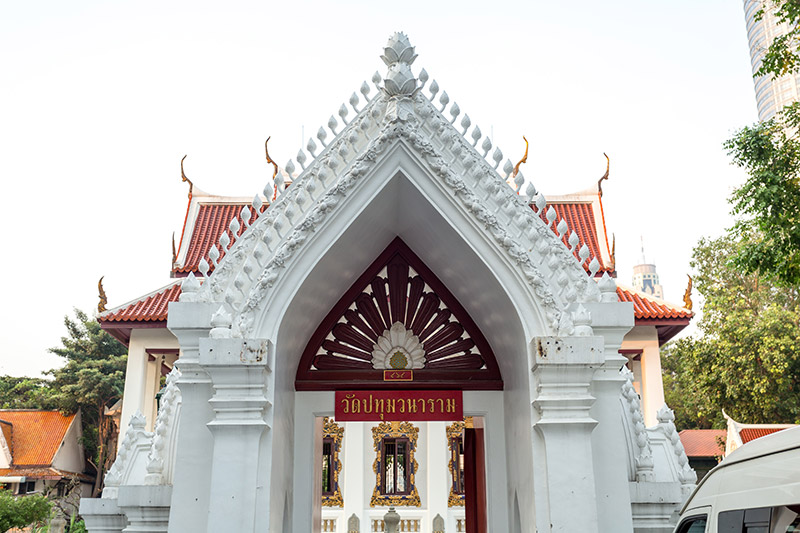 However, there is no sign of the lotus pond anymore. During the reign of King Chulalongkorn (Rama V), the pond was filled up to pave the way for a road. Though the symbol of the temple has disappeared, the temple and its name, Wat Pathum, live on. 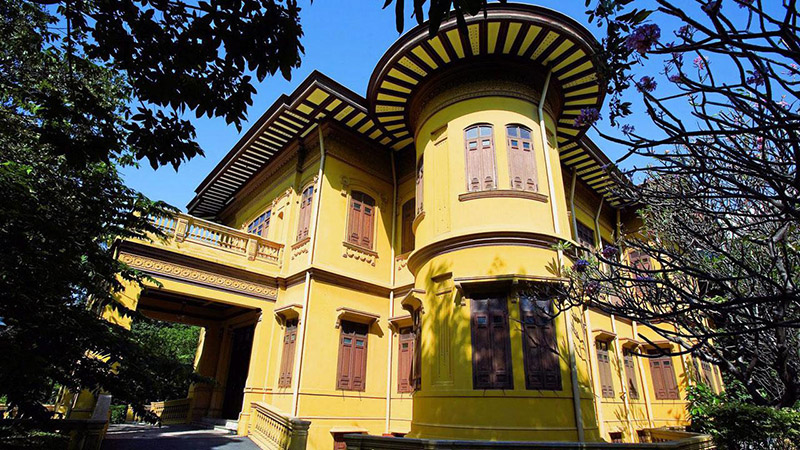 From now until the end of March, Sra Pathum Palace – the official home of the Mahidols – is opening its doors to visitors, with acces from behind the Siam Kempinski Hotel. A royal exhibition is currently underway at the Queen Savang Vadhana Museum (inside the palace compound) and has two parts. The first part – set in the exhibition hall – displays interesting facts about Queen Savang Vadhana (King Rama V’s consort and the grandmother of King Bhumibol Adulyadej), the history of Sra Pathum Palace, and the Queen’s previous works.

The second part of the exhibition – at Phra Tamnak Yai, the main building of Sra Pathum Palace and once the home of Queen Savang Vadhana – highlights the architectural wonders of the palace, its furniture and utensils. The exhibition also zooms in on the life and times of the Queen before and after the return of Prince Mahidol with his wife and three children from Cambridge, Boston.

Since this is still officially a functioning palace, visitors need to followthe rules and regulations plus a strict dress code.