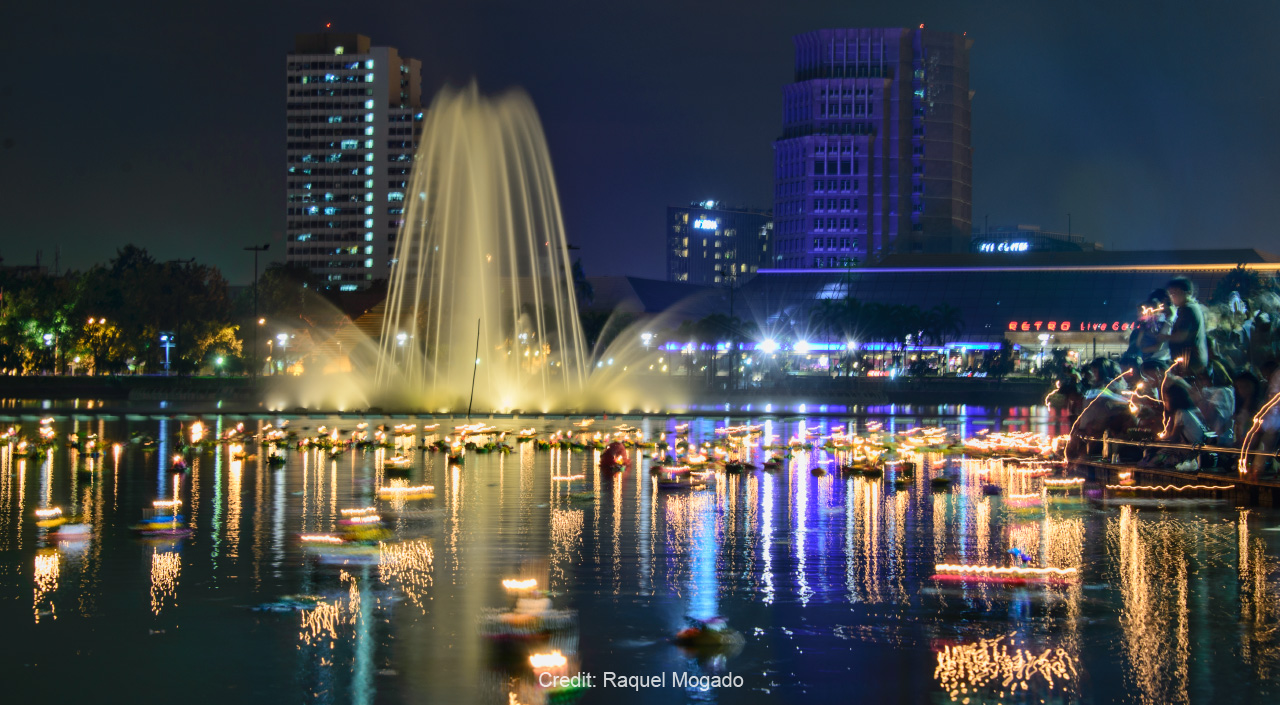 Let It Go, Let It Flow 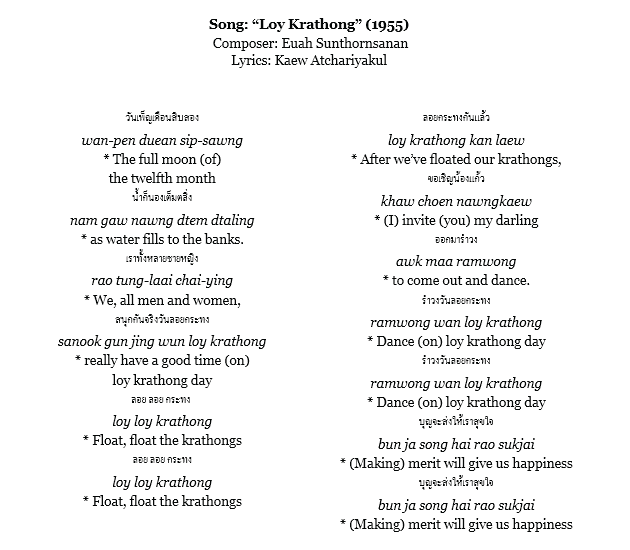 Written by the great Thai composer Euah Suntornsanan, “Loy Krathong” is one of the most remarkable songs sung during the Loy Krathong Festival or what I call the “Let It Go” festival.  It is a well-known event, but when it comes to the origin of this festival, no one knows exactly how it came into being.

The Thais show their gratitude toward Ganga Devi (aka Phra Mae Khongkha), or the goddess of the river, on the full moon evening of the 12th month in the traditional Thai lunar calendar (normally around the first or second week of November) by offering krathongs to her (loy means “to float” and krathong is a small leaf container). Before the krathong is released into the river, we will pray to Phra Mae Khongkha, thanking her for being a rich source of sustenance and for the water we use in our daily lives. The festival also affords Thais the chance to apologize to the goddess for their affronts such as polluting it. We also pray for her to take our hatred, sorrow, illness, and bad energy away with the current. Sometimes people will put a lock of hair, nail clippings, or some small change in their krathongs as an act of merit-making and to ask for forgiveness.

Conflicting theories and recent revelations have shaped the Thais’ understanding of the origin of the festival. Some believe the festival has its origin in the Sukhothai Era in the 13th century when a court lady named Nopphamat floated the first decorated raft and over time the custom evolved into a nationwide festival. Some say it began much later and around the early Rattanakosin (Bangkok) Era. Historians believe the story of Nopphamat might have been fabricated in the 19th century.  Anyhow, written historical records point to only the practice of pao tien len faii or the festival of candles and fireworks in our Kingdom. Originally this event signaled to farmers of the olden days to prepare for the approaching harvesting season.

The way people celebrate the festival is also changing. Normally a krathong is made using a thin slice of a banana tree trunk and decorated with banana leaves, flower petals, candles, and incense sticks. But people in other parts of Thailand approach the festival a bit differently. For example, in the North of the Kingdom, people celebrate the occasion by releasing thousands of lanterns into the heavens instead of the waterborne floats. They call the event Yi Peng instead of Loy Krathong (yi means “two” and peng means “full moon day”, referring to the full moon day of the second month according to the Lanna lunar calendar). While the folks in the northeastern province of Sakon Nakhon welcome the festival by using banana trunks to replicate towers.

During this nationwide festival, there’s plenty of opportunity to ensure everyone’s enjoyment at several venues throughout the country. These places tend to have a funfair, a Nang Nopphamat beauty contest, and lots of music and food. In Bangkok, there’s a lot of interesting places where you can participate in this event, especially at the temples along the Chao Phraya river. One of the most famous funfairs in Bangkok is held annually at Wat Saket (also known as Phu Khao Thong or Golden Mount) where food cart vendors offer various kinds of food and they are all superb. This is a good chance to let go of all the sorrows and worries with the water flow and start life anew.