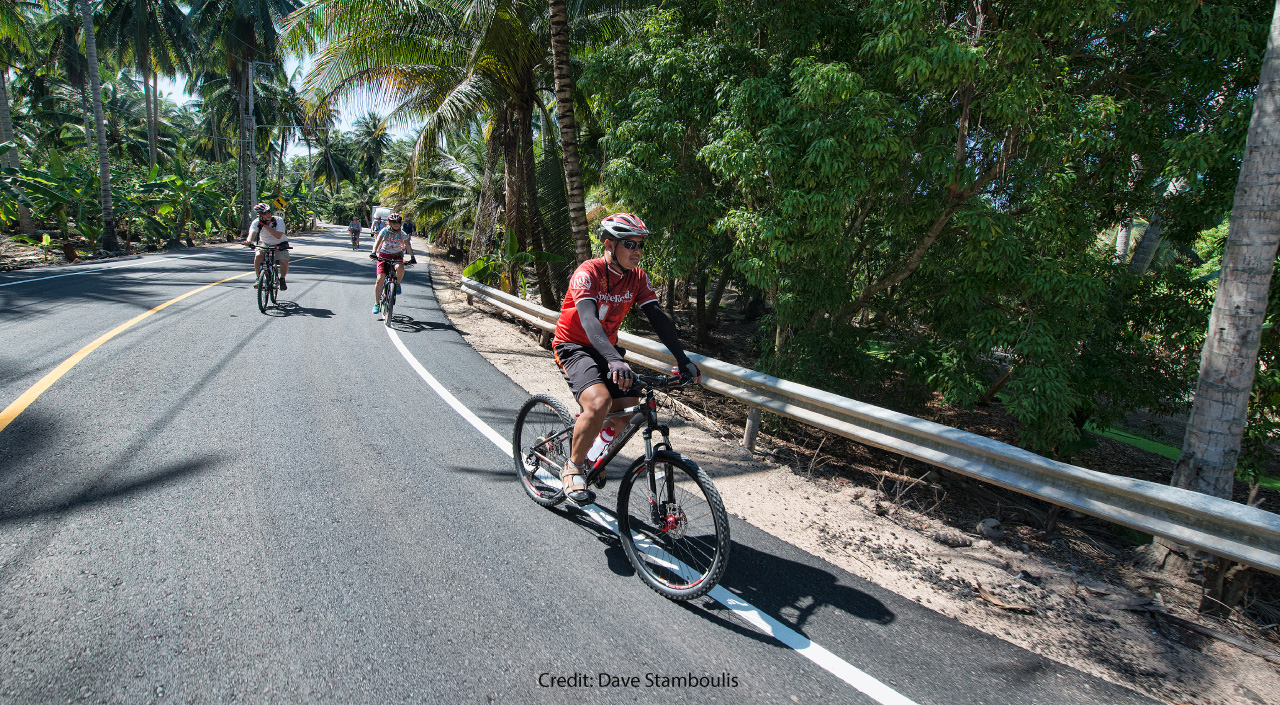 I spent most of my thirties bicycling around the world, 45,000 kilometers to be precise, and at that time, the bicycle lifestyle to me represented the ultimate in freedom, healthy living, and becoming non-dependent on oil. 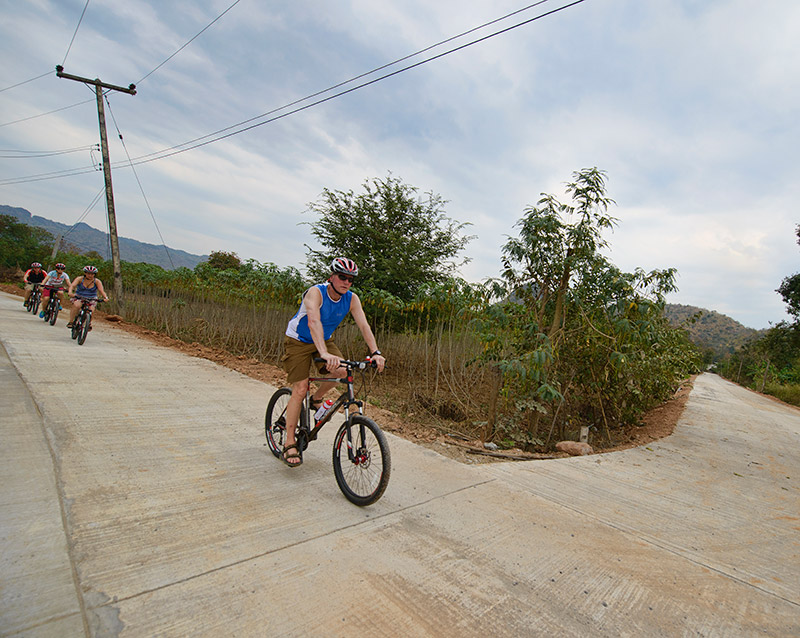 Moving to Bangkok changed all of that though, as trying to hug the nonexistent road shoulders amidst the heat, congestion, pollution, and legions of motorcycle taxis, tuk tuks, and other road chaos just wasn’t worth the pedal. Less than a decade ago, you’d be hard pressed to find a bicycle community in Bangkok. There was one good bike shop over by Lumpini, and the only attention cycling got was when the rare lunatic crazy enough to freewheel around the capital got flattened by a truck.

Oh, how the times have changed. While we certainly aren’t the Asian version of Amsterdam, the adventure-curious and health-conscious middle class here have embraced bicycle riding with a passion. Today, there are bicycle magazines, fancy hi-tech bike shops, even bike cafés and bars. The country itself has gone bicycle wild, with touring Bangkokians to be found pedaling along the Mekong, and even mass unity rides like the Bike for Dad event in 2015 celebrating His Majesty the late King Bhumibol’s birthday, and the Bike for Mom birthday ride honoring Queen Sirikit during the same year. 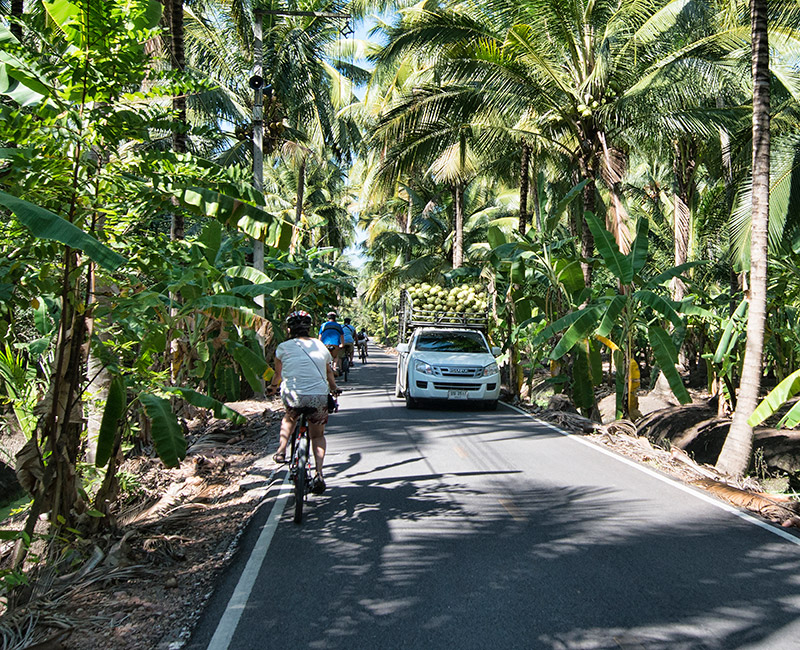 While Bangkok is still traffic dense and a place where the automobile rules, and while it still lags far behind pedal-friendly stalwarts in Europe, some positive changes are afoot, and there are some excellent places in and around the capital where cyclists can go spin without panic. Here are some of the best spots:

Suvarnabhumi Sky Lane
While you might want to wear your headphones here to drown out the noise of jets coming and going, the appropriately named “Sky Lane” is truly car-free, and a great spot for a full pedal to the metal workout. The newly paved cyclists track, accessed by a private gate, runs 23.5 kilometers around the airport, has bathrooms, 1,500 parking spots, food and drink provided rest areas, first aid stations, and features reflective lights for night riding. Helmets and proper footwear are required, and it’s a fantastic spot for some fast, flat training with nary a vehicle around other than those flying above.

Old Bangkok and Chinatown
You’ll either need a penchant for getting lost, a good map, or even better, going with a local bicycle tour company (see below), but wandering the alleyways and canal and river roads is a great way to see traditional Bangkok, checking out both its famed tourist sites like Wat Arun and Chinatown, as well as some of its hidden treasures like the canals of Thonburi and Bangkok Noi or the old Portuguese Santa Cruz church and community, with its nearby bakery serving Portuguese cake pastries made from recipes passed down by several generations. There are some major roads to cross, but a vast array of lanes and alleys keep you away from the cars, and the terrain is pancake flat.

Chanthaburi Coastal Bike Route
For those who love longer distance picture postcard touring, this has to be the best flat route in the country. The picturesque Chalerm Burapha Chonlathit road in Chanthaburi Province has been designated a scenic route, and features the kingdom’s longest bike route to date, with marked red bike paths running 75 kilometers in either direction. The route runs from west of Chanthaburi province near Klaeng district, and heads east to the tiny fishing village of Laem Sing, passing old forts, mangrove swamps with elevated walkways, and some lovely beaches.

There are designated bicycle parking areas, and you can even rent bikes from the sleepy beach hamlet of Chao Lao, which also has inexpensive accommodation and a handful of seafood restaurants on the beach. You’ll see families, bike clubs from the nearby Burapha University’s Chanthaburi Campus, older folks, and Bangkok escapists here. The area is crowded on weekends, but pretty much deserted during the week, and it is one of the few places left in Thailand that hasn’t been discovered by foreign tourists, making it a great place to ride and check out some traditional slices of coastal life.

Bang Krachao
You’ll be shaking your head in disbelief on this one, being just five minutes across the Chao Phraya River from central Bangkok, yet feeling like you are on an island way down south. Bang Krachao, known as the “green lung” of Bangkok, is the city’s least developed and most open green space, an absolute escapist haven for city dwellers, and a great place to wander by bicycle.

The best cycling here takes place on narrow elevated walkways, built to protect the marshland area from flooding, and while a bit of balance is required here (there are no guardrails along the quaint waterside paths), you’ll be transported to a magical green world, complete with coconut trees, old homes, and a total lack of factories, condominiums, and high rises, all of which are not allowed here. A boutique tree house hotel and a gourmet coffee shop with Wi-Fi access have emerged in the last year, making the tranquil spot all the more beckoning should you decide to stay overnight.

Travel Tips
There are some top-notch bicycle tour companies that arrange trips both in and around Bangkok, as well as further afield. Many feature support vehicles, all have well-trained guides, rental bikes, and come well recommended. Here are some of the top players: