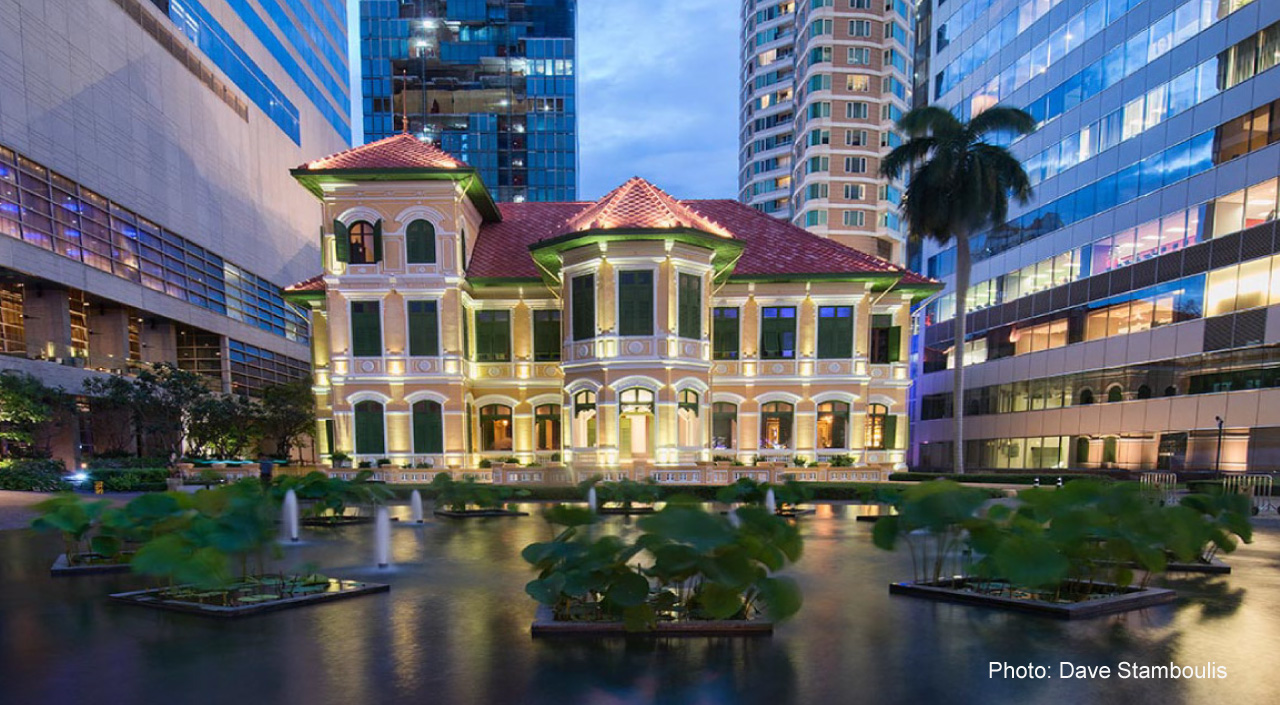 As Bangkok has developed and become more overdeveloped in the past years, it has become harder to find glimpses of its storied past. Thus, I am always pleased to come across little gems that seem to survive amidst the surrounding cranes and construction. Several years ago, my curiosity was perked by a beautiful old colonial building that sat near the corner of Sathorn and Narathiwat, surrounded by the monstrous skyscrapers of the Central Business District, slightly crumbling, yet still elegant. I walked by the building several times in the next months, and when the W Hotel opened next door, I heard they’d taken over the management of the old house and were planning to turn it into a restaurant. Visiting several weeks ago, I was overjoyed to see the aptly named House on Sathorn restored to its former glory and to get the chance to learn about its history while eating a most unique meal at the same time. 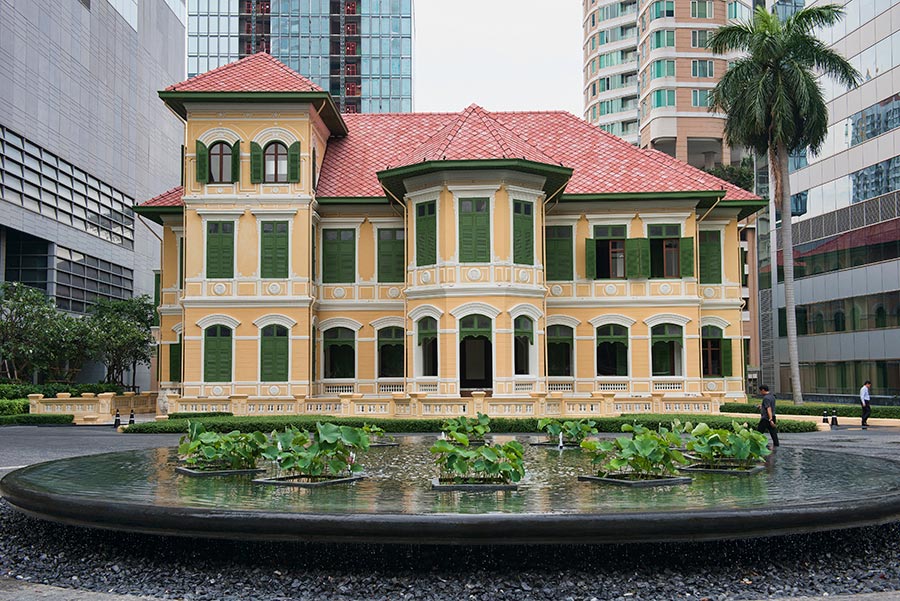 The House on Sathorn was built in 1889 and belonged to Lord Sathorn Rajayukta, a businessman responsible for building the Sathorn Canal. He eventually fell on financial hard times and had to give up the property, from whence it became a luxury resort, the Hotel Royal, during the 1920s. Further on, the hotel declined, and the beautiful house became the home of the Embassy of the Soviet Union, and then the Russian Federation Embassy from 1948-1999. The colonial mansion sat vacant after this, until the W launched into the ambitious project to restore it.

This was no easy feat. As a protected historic building, the House on Sathorn came under the auspices of the Department of Fine Arts, and their approval was required during all stages of renovation. Avroko, the design firm behind the facelift, stayed true to their wishes, even keeping the two-toned original color scheme of the house, as well as preserving details like pig faces in the mansion’s columns and Lord Sathorn’s personal zodiac sign; and the interior, with its neoclassical elegance, is exactly as it was, full of period furniture and vintage wooden staircases. 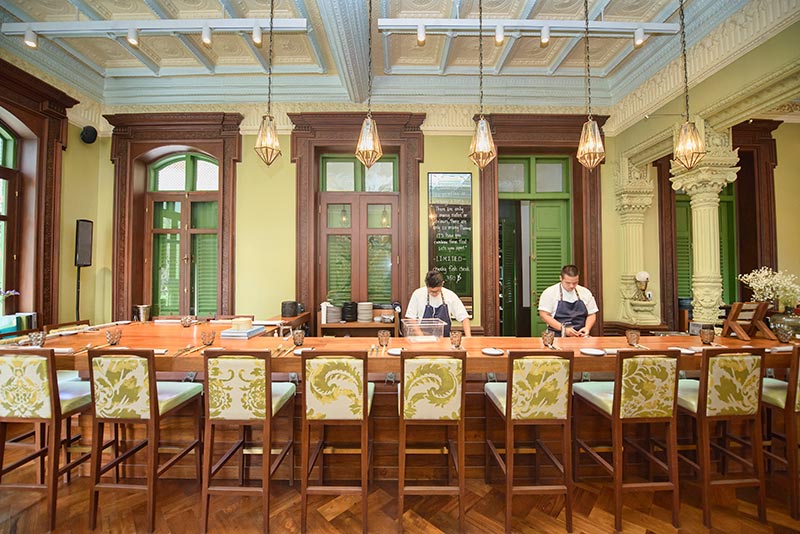 Perhaps just as interesting as the wonderful building, though, is its restaurant’s storied concept matching the history of the house. Culinary director and head chef, Fatih Tutak, a Turk from Istanbul who has done stints at the prestigious Bellbrook in Hong Kong, Marina Sands in Singapore, and the 3-Michelin-starred Nihonryori Ryugin in Tokyo, decided he wanted to do something in the kitchen that would match the history of the 126-year-old house, so he decided to create a menu inspired by his memories and stories from his own life as a chef.

There can’t be too many restaurants and chefs taking this novel approach, with each dish telling a story. Take for example, “Snowstorm in Istanbul, 2004,” which is a fine lamb kebab. The dish comes from Tutak recalling his days in culinary school, when the worst snowstorm in recent Istanbul history shut down most of the city. There were a row of kebab restaurants at which Tutak and his mates used to eat, but during that week, all of the sellers closed down except for one, who provided them sustenance during the freeze.

The most unique and stunning dish on the menu has to be “The Hunting,” named after Tutuk’s German wife’s family, whom he says were really “old-school traditional.” On one of his first visits to his in-laws, his father-in-law took him duck hunting, and this dish is based on that memory. A duck breast is served with sorrel leaves (representing the duck’s wings), and then the duck is surrounded by pomegranate sauce and seeds, which represent the blood, while burnt onion powder shows up as the exploded gunpowder used on the hunt. Needless to say, The Hunting is both intensely visual and visceral. 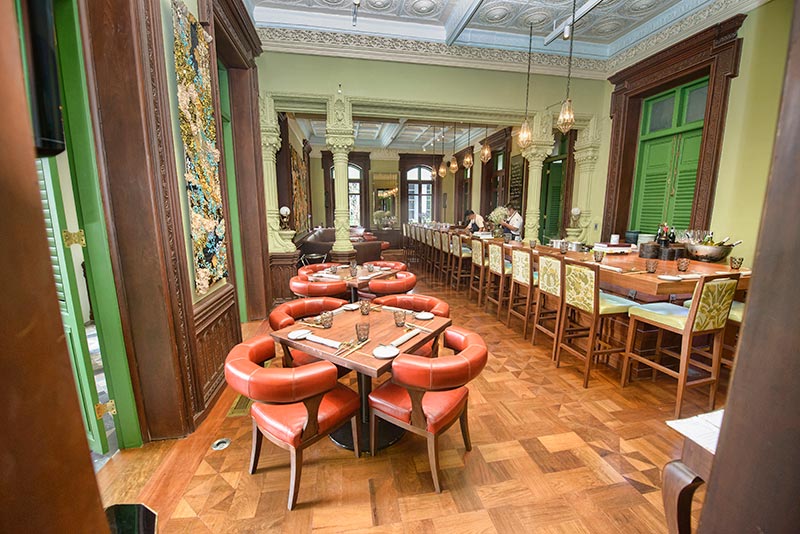 Another great one is “Early Morning at Tsukiji Fish Market,” recalling Tutak’s days as a chef in Japan, where he’d go to Tokyo’s famed morning seafood market. For this dish, fine katsuo tuna from Tsukiji is marinated and served with avocado, seaweed, and wasabi on a large lotus leaf. Also inspiring is the “Season, Volume 3” (every new season brings a dish based on the produce available during those months), where a Jerusalem artichoke gets served up with a porcini mushroom and tapioca infusion into which an onsen egg (cooked at 60ºC for 30 minutes) has been dropped.

While it would be easy to call the whole setup and experience at the House on Sathorn truly fine dining, chef Tutak says that he thought this was too stuffy, and instead, the team here calls it “fun dining.”

It’s great that the old mansion has been opened up to the public and that such painstaking care has been put into its revival. And while the dining room storybook experience remains the best part, the House on Sathorn actually is far more comprehensive. The adjoining bar serves up master mixologist Joseph Borowski-inspired cocktails, and there is a lovely outdoor courtyard in the back where one can opt to eat in, or else just visit for afternoon tea, and even the upstairs of the original house has been put to good use as club for late night cocktails, desserts, or parties.

The House on Sathorn