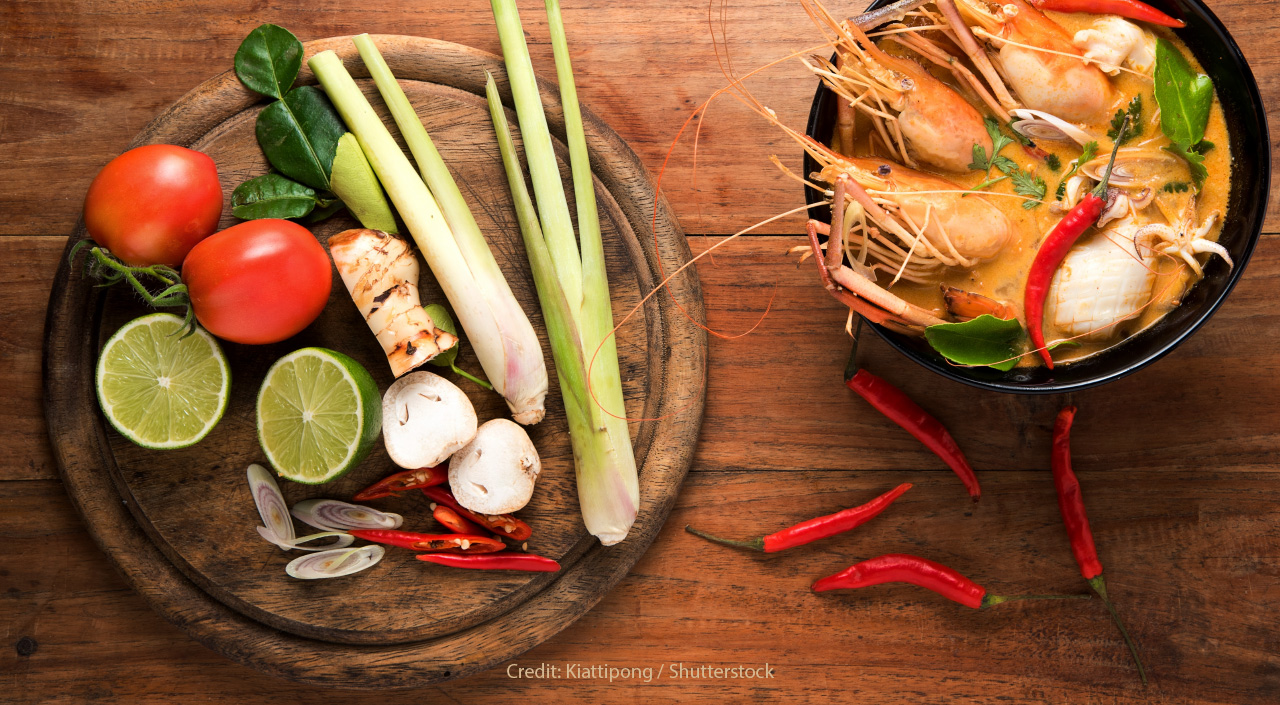 Apart from pad thai, the spicy tom yum kung soup is another world renowned Thai dish, usually served with prawns. Those who know how to cook this scrumptious comfort food would know that three main herbal ingredients are indispensable in the tom yum recipe: galangal, lemongrass and kaffir lime leaves. These herbal plants work a treat in Thai cooking as well as folk medicine.

Galangal
Many people who are not familiar with Asian cuisine can easily mistake galangal (kha in Thai) for ginger (khing). Even though galangal is from the ginger family (Zingiberaceae), it looks, smells and tastes differently from ginger. The outside appearance of galangal root is smoother and the color inside is milder than ginger’s bright yellow color. Young galangal has a very unique aromatic and citrusy scent and can be mildly spicy. It is used in famous Thai sweet and sour coconut light soup with chicken called tom kha gai, while old galangal is used in many types of Thai curry pastes such as green curry, red curry, panang curry, and massaman, thanks to its primary role in warding off the smell of gamy meat. Galangal is also used in Vietnamese and Indonesian cooking.

Just like ginger, galangal is known to help promote a healthy digestive system. It may help alleviate diarrheal symptoms, like vomiting, and is also known for its antibacterial and antifungal properties. Many people grind it and apply it to the skin to cure some skin diseases such as tinea versicolor and ringworm. Similar to ginger, galangal can be used as a tonic to help heal a cold and other respiratory conditions. Boil slices of galangal in water and mix it with lime juice, honey and a bit of salt for a better taste.

To top it all off, a study published by the National Center for Biotechnology Information (NCBI) in 2014 has shown that galangal has antioxidant effects and suggested that a high concentration of Alpinia Galanga (Thai galangal) extract can significantly reduce gastric cancer cells in humans.

Lemongrass
One of the best-known herbal ingredients in Asian cuisine, lemongrass (ta-krai) gives off a strong lemon-like scent that could enhance the flavor of any dish. While having very sharp long leaves, the part used in cooking is mostly its stalks. Apart from being one of the main ingredients for different chili pastes used in Thai curries, sliced young lemongrass is the main ingredient for making spicy salad, such as shrimp spicy salad or plar kung, mackerel salad or yum pla too, or grilled pork marinated in lemongrass paste or moo yang ta-krai. Similar to galangal, lemongrass is known to tame the overpowering smell of meat. Therefore, they’re both used to make spicy fish soup or chicken spicy clear soup as well. Lemongrass is also a necessary ingredient in many Vietnamese, Indonesian and Cambodian dishes.

Lemongrass contains natural oil called citronella. When crushed, a lemongrass stalk gives off a heady scent that can easily repel insects such as mosquitos. Lemongrass oil extract or lotion is widely sold at many Thai local markets or department stores. But if you can’t find one, simply crush a bunch of stalks, tie it up and leave it in any corner of your house. Lemongrass is used as a folk remedy as it’s rich in antioxidant vitamins such as vitamins A and C. It can also help relieve stomach pains due to colitis, indigestion or diarrhea.

The unique scent of the plant can also reduce stress and is widely used in the spa industry as massage oil. For home therapy, you can also use up to 12 drops of lemongrass essential oil with coconut or jojoba oil in your bathtub for a relaxing bathing experience. Research findings also confirm that lemongrass oil may help lower your cholesterol levels. To make easy lemongrass tea, simply crush lemongrass stalks, put them along with its leaves in the boiling water along with pandan leaves, and add some honey to enhance the taste.

Kaffir Lime
Just like ginger and galangal, many people who are not familiar with these plants would probably mix kaffir lime with lime. Kaffir (makrut) comes in a bit darker green in color and has a rough and knotty surface while lime usually has a smoother skin. Like galangal and lemongrass, kafir lime leaves are used in many Thai dishes apart from tom yum soup. Thinly sliced kaffir leaves are used to garnish many dishes including panang curry and crispy whole snakehead fish served with spicy and sour sauce or pla chon lui suan. Sliced kaffir leaves are part of curry mixtures such as one that’s used to make the Thai popular fish cake or tod mun pla.

Kaffir lime juice can also be added to different dishes to lift up the aroma and add a tang of sourness. These include fermented rice vermicelli served with sweet nutty sauce or khanomchin nam prik, pork belly curry with morning glory or kaeng moo tepho, or orange sour soup with mixed vegetables or kaeng som.

Kaffir lime has numerous health benefits. Its juice is often mixed in shampoo or used on its own to help reduce scalp itchiness and dandruff, while helping to promote strong and shiny hair. To get the concentrated juice, try boiling the fruit before squeezing the juice out. Similar to galangal and lemongrass, kaffir lime can reduce stress, helps with stomach ache and other types of inflammation.

Its acidic quality can get rid of foot odor. Simply mix kaffir lime juice with some sliced ginger and salt in lukewarm water. Soak your feet in it for 15 minutes and repeat a few days or weekly. An essential oil from kaffir lime leaves can also help promote oral health. You can rub the leaves against your gums directly but softly, to prevent bacteria from building up on the gums and teeth. You can add the oil to your mouthwash for the same effect as well.

These three herbal ingredients are part of a plethora of natural and healthy ingredients in Thai cooking. Thai dishes sometimes can be a bit complex to make, yet they’re highly sophisticated in taste. It’s no surprise that Thai food remains one of the world’s most favorite choices.