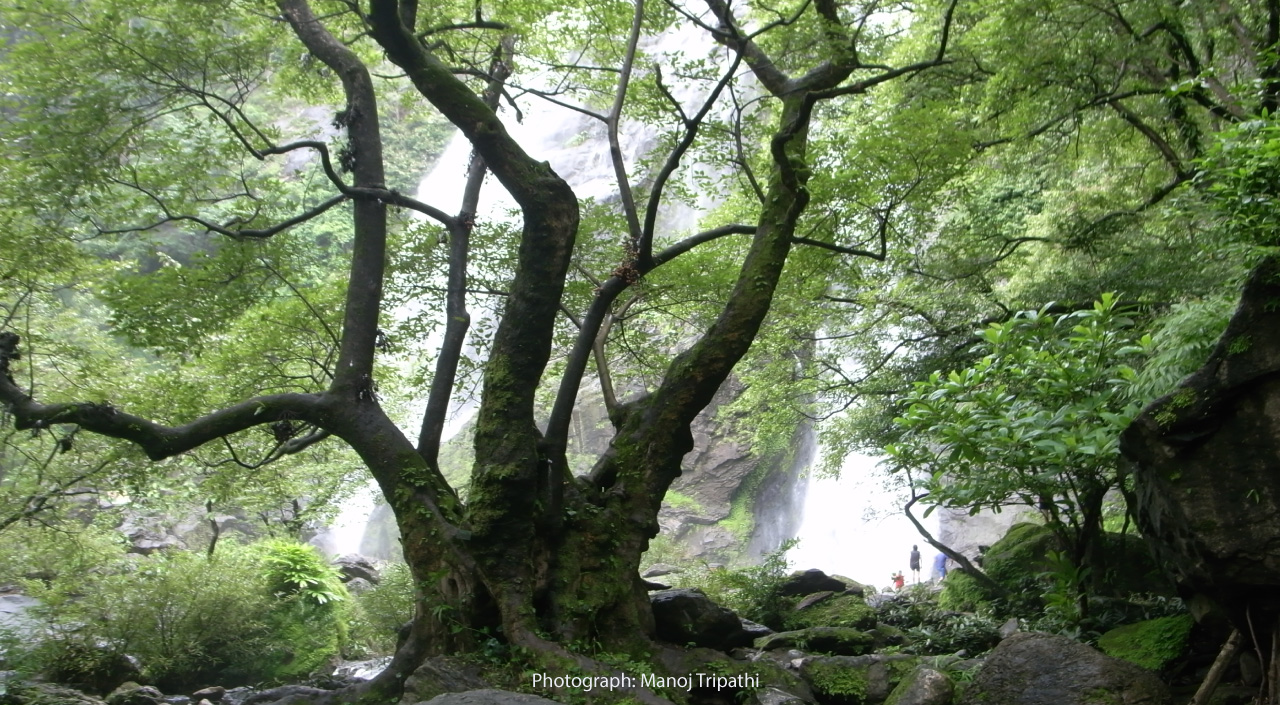 Summer’s upon us, but many Thais are not really dreaming of glorious sunshine or hitting the great outdoors. With the horrid Bangkok heat so unbearable amid a layer of thick smog, thousands of weekenders are flocking to popular beaches east and south of Bangkok.

However, in many of these places, a private weekend getaway on the beach is often prone to hitting snags. Scenes of bedlam like the private fiefdoms of sunloungers hosting rowdy picnickers on the beach are facts of life, as are gangs of pickup trucks blasting mega-decibels of lookthoong dance music into the balmy afternoon breeze.

But it’s possible to go for a dip elsewhere without having to worry about beach mayhem. Go off the beaten track a bit and you’ll find waterfalls along with wild natural beauty and plenty of shade trees forming well-preserved tropical rainforests inside Thailand’s national parks only a few hours’ drive from the capital.

These cascades are magnets that draw throngs of local and foreign tourists wanting to cool off every weekend. But don’t fret: strict regulations are in place to weed out individuals triggering disturbances that are fairly common at major beach paradises like loud music, uproarious parties and public intoxication.

Despite the apparent orderliness of life imposed by national parks, these waterfalls are the best natural spots to bathe and swim with deep pools of crystal-clear water, natural fish, and fresh air. A visit to a national park is generously rewarded with a rare chance to spend time communing with nature and the positive effects of having a good cool soak in a natural pool.

It refreshes tired feet after a long day on foot, tightens the body, reduces redness, and calms a racing pulse. It leaves one feeling totally cleansed of the negative emotions.

One is spoiled for choice when looking for where to go for a two-day and one-night drive trip. When it comes to waterfalls, it’s possible to drive east, west or north from Bangkok. The nearest waterfalls to the south usually run dry in summer.

Going north, you’ll find one large waterfall plus a few smaller ones located nearby. So the trip can be as short as an overnight stay. If you have more time, it’s wise to explore other attractions set in national parks that lie further afield.

People think of Kanchanaburi when it comes to relaxing near a waterfall. Well, many large waterfalls there are easily accessed by car within an hour or two from Bangkok and thus packed out at weekends. But it’s a good idea to stay away from the crowds and explore other options that are off the tourist trail.

Going east, you encounter about three major cascades that are quite far apart but equally scenic. As the hot season is in full swing, don’t expect too much water at some of these cascades. Don’t go to Khao Soi Dao Waterfall (dry at the moment), for instance, or Khao Yai (where swimming is prohibited). But the big ones in the east have water flowing all year round. So  make sure you spend a few nights so that you have a good rest before driving back to Bangkok.

Here’s a selection of waterfalls worthy of a weekend getaway or a three-day and twonight drive trip. According to park officials, all the waterfalls listed here still have flowing water this month. 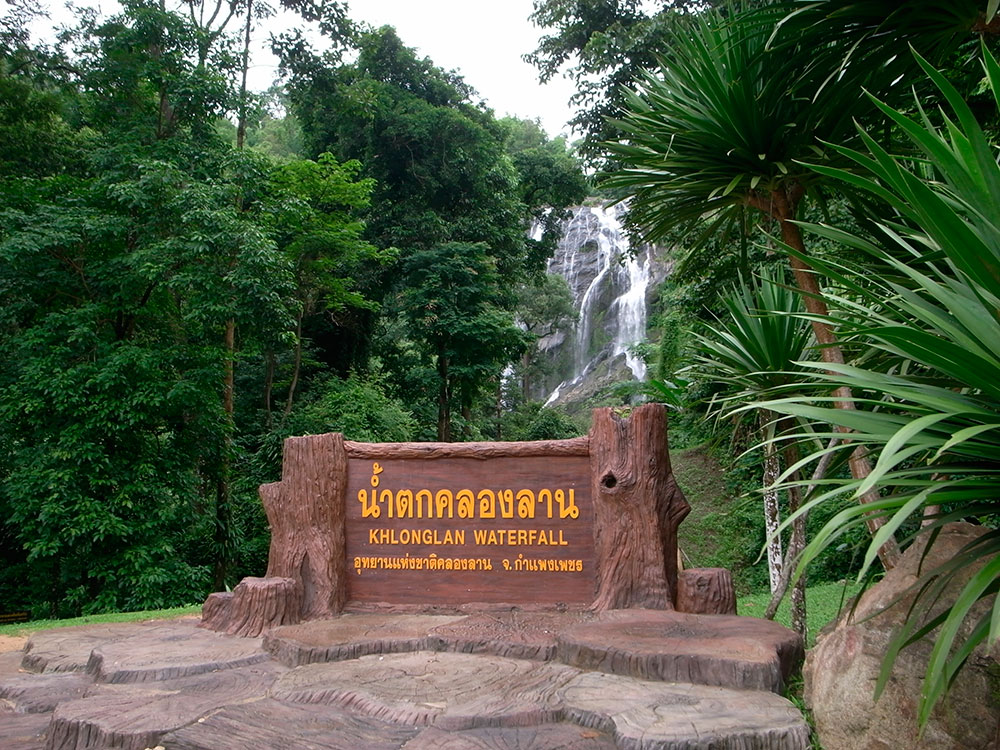 Khlonglan Waterfall, Kamphaengphet
Khlonglan is 370 km from Bangkok and easily accessed via Highway 1 and routes 1242 and 1072. By far the most spectacular waterfall in Kamphaengphet, Khlonglan has its source in the mountains of Khun Khlong Lan with the highest peak perched 1,439 meters above sea level. The waterfall is made up of five streams that plunge 100 meters down the cliff to a large pool at the bottom where it’s safe for kids and adults to have a good swim. It’s worth spending a day or two in this national park to explore other nearby waterfalls or attractions like Chong Yen (Cool Channel) in nearby Mae Wong National Park where you can find rare species of birds that live at high altitudes. Near the waterfall is a nature trail, a one-km trek to explore flora and fauna. It’s a favorite with bird watchers, too. This month, the waterfall has not much water, but the pool has enough water up to chest level, so it’s OK to have a good dip, according to a park official.
Tel. 088 407 9915 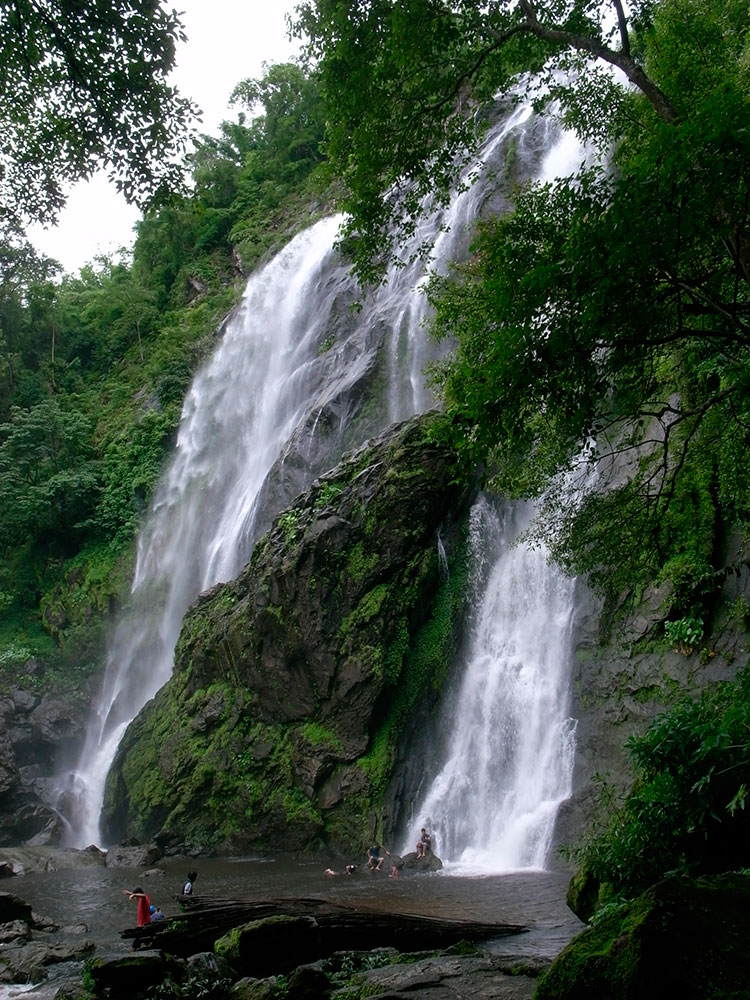 Klong Nam Lai Waterfall, Kamphaengphet
This medium-sized waterfall with many levels, 25 km from Khlonglan Waterfall, is worth checking out if you’re already based at Khlonglan and want to explore other attractions nearby. Its pool is about three meters wide, so it’s suitable for a good soak, but the pool is often a favorite with teenagers while adults sit around taking in the views instead. The multi-tier waterfall still has plenty of water flowing this month.
Tel. 088 407 9915 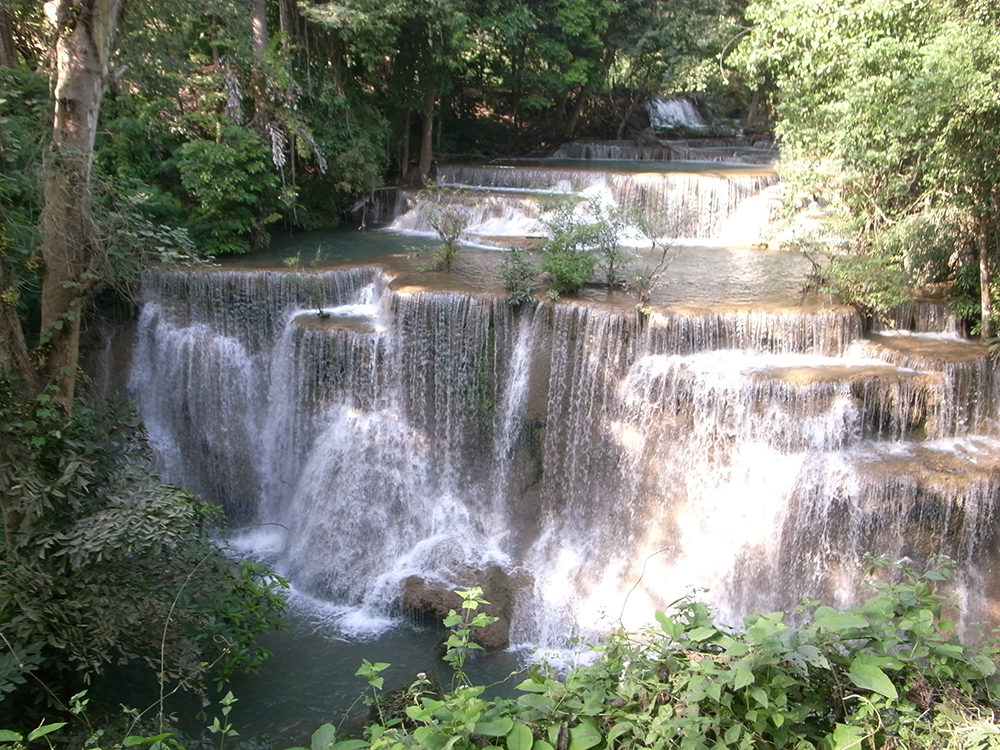 Huay Maekhamin is by far the most beautiful waterfall in
Kanchanaburi with different levels | Photo Credit: Manoj Tripathi

Huay Maekhamin Waterfall, Kanchanaburi
Huay Maekhamin, 280 km from Bangkok, is one of Thailand’s most beautiful waterfalls. The source of this limestone waterfall is a brook called Huay Maekhamin that cascades down seven tiers from the top of the mountain. Adventurous hikers can attempt the hour-long climb to the seventh level called Romklao, which is 2,270 meters from the first level. Each level has its own nature trail for visitors who want to explore the park’s dense forest. Amazingly the waterfall has fresh water flowing all year round.
Tel. 062 325 5498 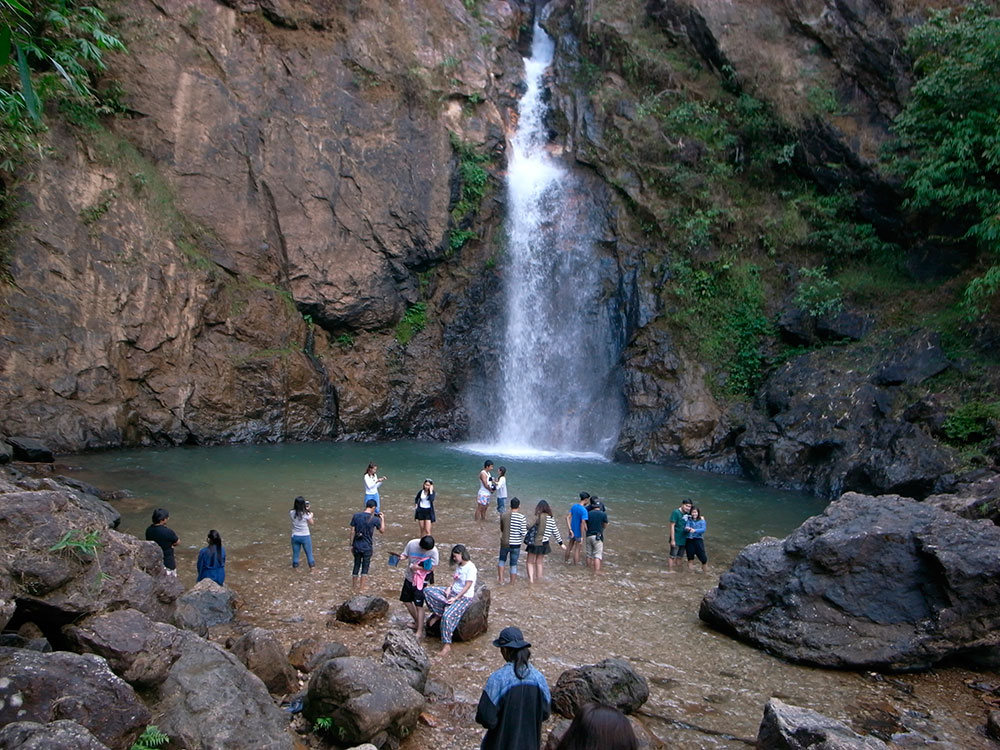 Jok Ka Din Waterfall, Kanchanaburi
This waterfall is 138 km from Huay Maekhamin via a dirt road that rises and dips through the hills, or 241 km from that waterfall via a lengthy detour on a well-paved road. You’re advised to take the latter route unless it’s an off-road vehicle you’re driving. Located not far from Ban Itong village on the Myanmar border (famed for Andaman crabs imported from Myanmar), Jok Ka Din is a real unspoiled gem and is well worth a stop if you’re planning to visit that quaint, sleepy border village that exudes a laid-back charm. The waterfall is surrounded by lush forest and off the tourist trail, so it’s ideal for having a good long soak on your way back to Kanchanaburi city. This month the waterfall has plenty of water.
Tel. 098 252 0359 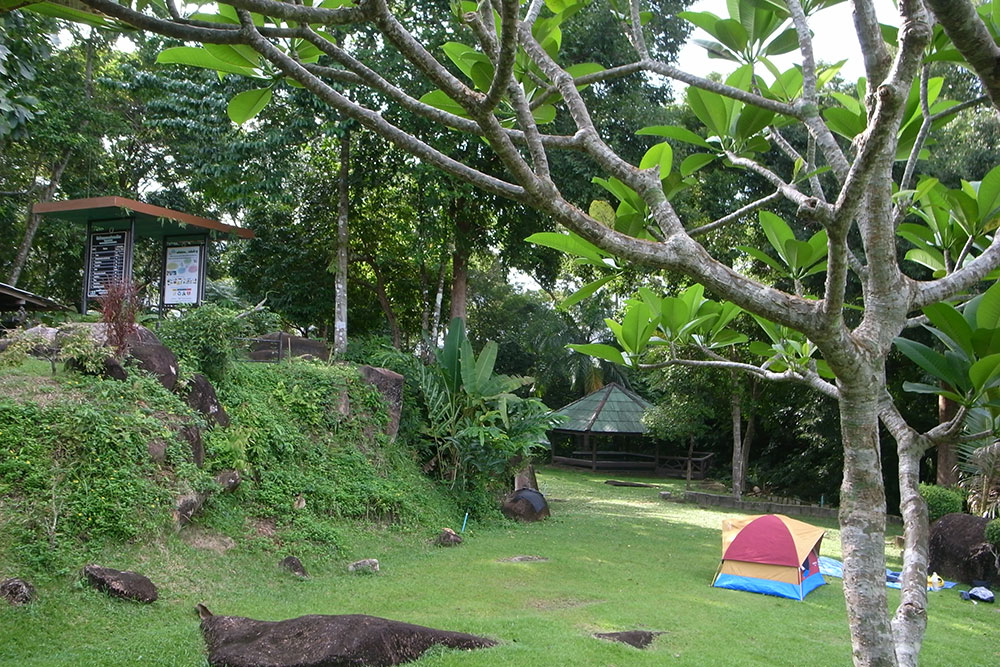 Plew Waterfall has a campsite on top of the
hill, plus decent accommodation for visitors | Photo Credit: Manoj Tripathi

Plew Waterfall, Chanthaburi
This waterfall is 240 km from Bangkok and easily accessed via Highway 3. Its stunning scenery is a magnet that has drawn both local people and VIP visitors from afar for many centuries. Among them was King Chulalongkorn (Rama V) who fell in love with Plew with a number of visits between 1847 and 1854. For the king, it was more beautiful than any other he’d seen in Penang or Koh Chang. The green pool provides a rich habitat for a million fish, and you’re allowed to have a good swim in it. Once here, you wouldn’t want to leave.
Tel. 039 434 528 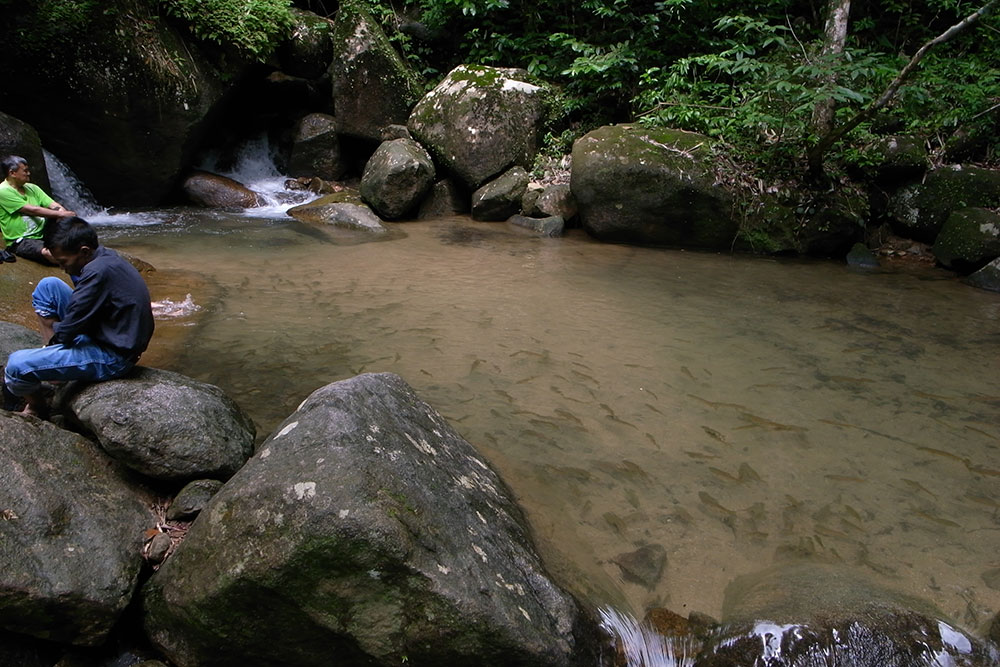 Krathing Waterfall, Chanthaburi
Set inside Khao Khitchakut National Park and 230 km from Bangkok, Krathing Waterfall is a tall cascade with 13 levels. It’s possible to trek up to level eight. The last five levels are off limits to visitors. People come to this national park for camping in its vast patches of greenery, with plenty of flowing water available all year round. For visitors, taking a dip in the large pool at the bottom of the waterfall is the best way to battle the heat. It’s worth having an overnight stay to commune with nature or explore nature trails.
Tel. 081 945 0049 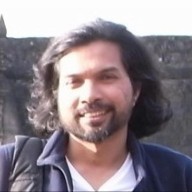 Manoj Tripathi spent two decades as a newspaper hack, based in Bangkok and Yangon, with a multimedia giant in Thailand before switching his career toward media consulting/training. He has penned a few travel guides to Thailand’s most scenic drives, and loves street food, travel, and wildlife watching.