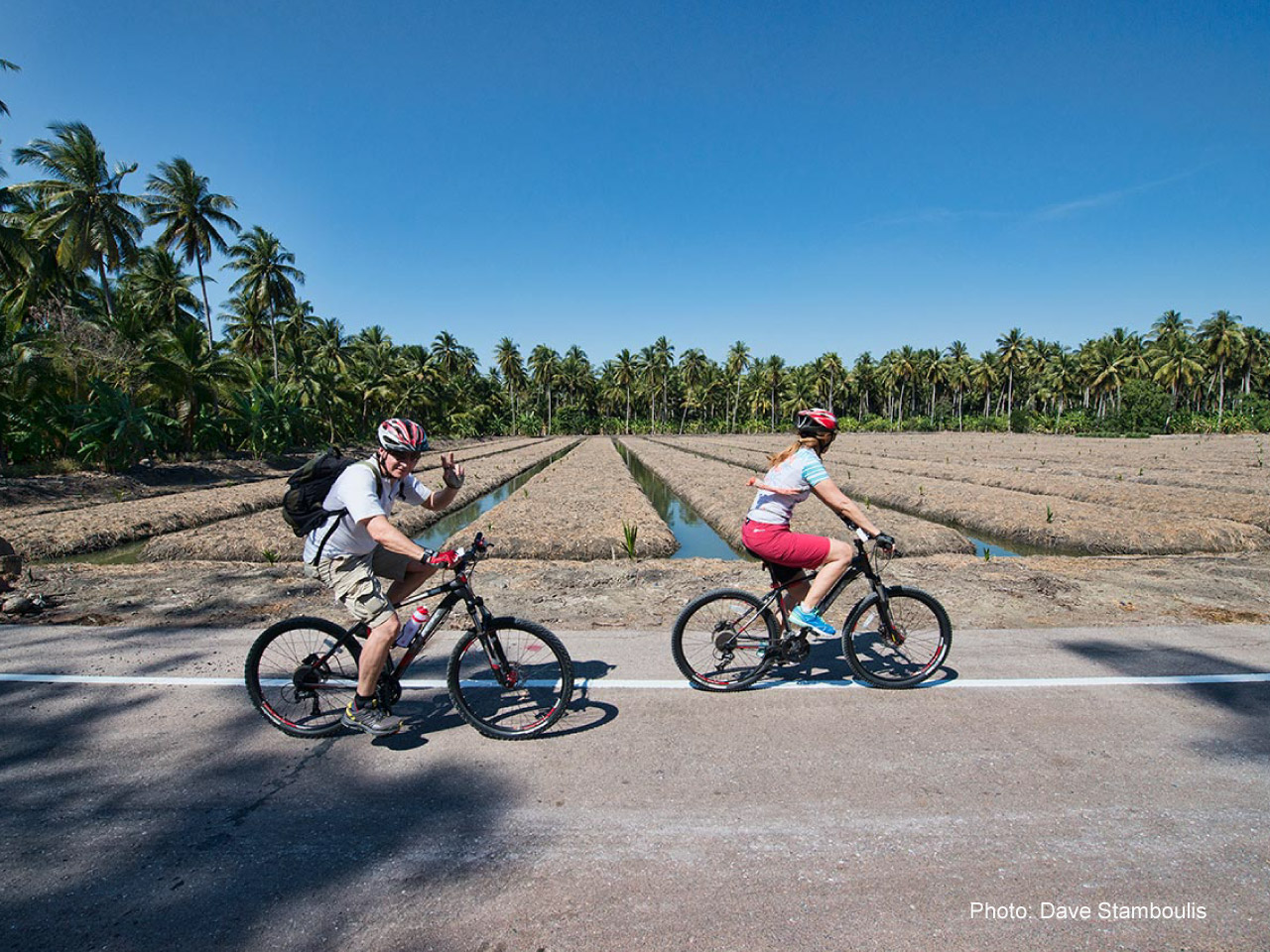 I spent most of my early adult years on a bicycle. I rode around the world, I commuted, I gave up my car and automobile insurance, I pretty much organized my life around living on two wheels. However, settling in Bangkok over the past decade, I’d forgotten about the joys of pedaling, other than the stationary bike offered by my gym. Face it, Bangkok isn’t exactly known for being bike-friendly. Regardless of the efforts by the BMA to add more bike lanes and increase awareness, you have to either be an adrenaline junkie or else just plain foolish to get your jollies riding in slow gear around Krungthep. However, I recently decided it was time to get back into the saddle and opted for some local touring with SpiceRoads, one of Bangkok’s premiere bicycling companies. I was surprised to find some undiscovered treasures and plenty of quiet back roads, more than I ever would have thought possible here. 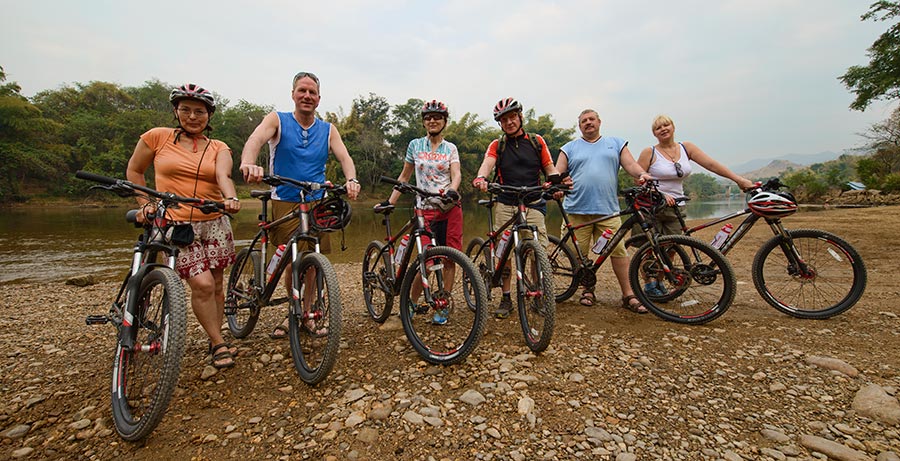 SpiceRoads runs bicycle trips throughout Bangkok, Thailand, greater Asia, and elsewhere in the world. Their motto, proudly worn on the jersey of our guide, Tom, says “See the world by bike.” The company is based in Bangkok and features well-trained guides and plenty of knowledge on all the best routes and local hotspots.

Here in Bangkok, they offer trips to Chinatown, heading out to the morning markets before cruising across the river to Thonburi and checking out off-the-beaten-path cycling gems like the Princess Mother Memorial Park. Another trip explores the small waterways and canal paths of Bang Krachao, Bangkok’s largest open green space, a spot you’d never realize was just minutes from downtown and yet worlds away.

I wanted something a bit more all-encompassing, so I opted for a four-day trip over a long weekend, taking in Ayutthaya, Kanchanaburi, and the floating markets around Damnoen Saduak. While I’d been to these places many times over, both as a tourist and as a photographer, I got to see them in a completely new light as we slipped in to each destination unannounced via small roads and even single-track lanes that traversed coconut or tapioca plantations, with the only traffic being smiling farmers hauling their recent crops to market.

Having a Thai guide allowed us to gain access and communicate in every little hamlet we stopped in and learn a bit about the locals’ lives, not to mention not really having to concentrate on navigating. Knowing how awful the traffic can be in many parts of the country, I was quite amazed to find us sailing along on almost-deserted back roads, even getting off road through the forest on empty dirt tracks. SpiceRoads has obviously done an extensive amount of planning and research to come up with these routes, and they make it a joy to ride a bike without having to worry about automobiles. 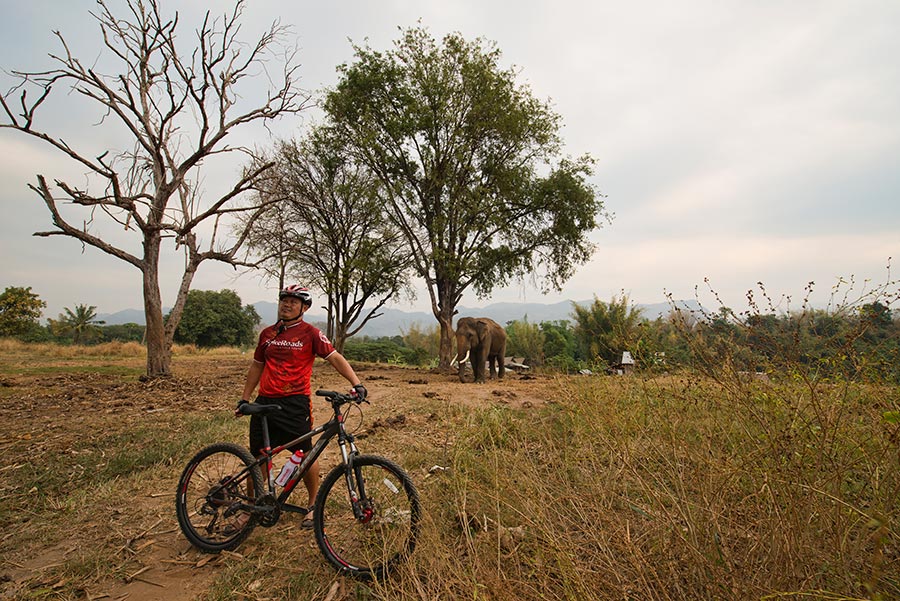 While cycle touring is full of the sights, sounds, and smells of the road, and offers some great photo-ops, it also comes at the expense of heat, dust, inclement weather, and one fairly sore body. Fortunately, SpiceRoads has arranged their tours to take away most of the discomforts of the road, and let participants just enjoy themselves while getting a great workout at the same time. All of their tours feature several support vehicles, including a minivan and a truck. The truck is used for transporting the high-end bicycles that the company gives riders (doing a perfect job of sizing each guest prior to the trip and personalizing his/her bicycle) and the driver also thoughtfully stationed himself at any tricky turns or busy road crossings to ensure fast traffic was slowing down or that everyone made sure not to miss a turn.

Additionally, there is a minivan used for transporting riders who might get too fatigued or, in our case, taking us between sights, as we covered three different areas of the region on our tour. The minivan is also equipped with a large ice chest, and riders pull in to the perfectly timed rest stops to find fresh fruit, cookies, ice-cold drinks, and even cold towels waiting, really making it seem that every whim has been thought of and catered to. 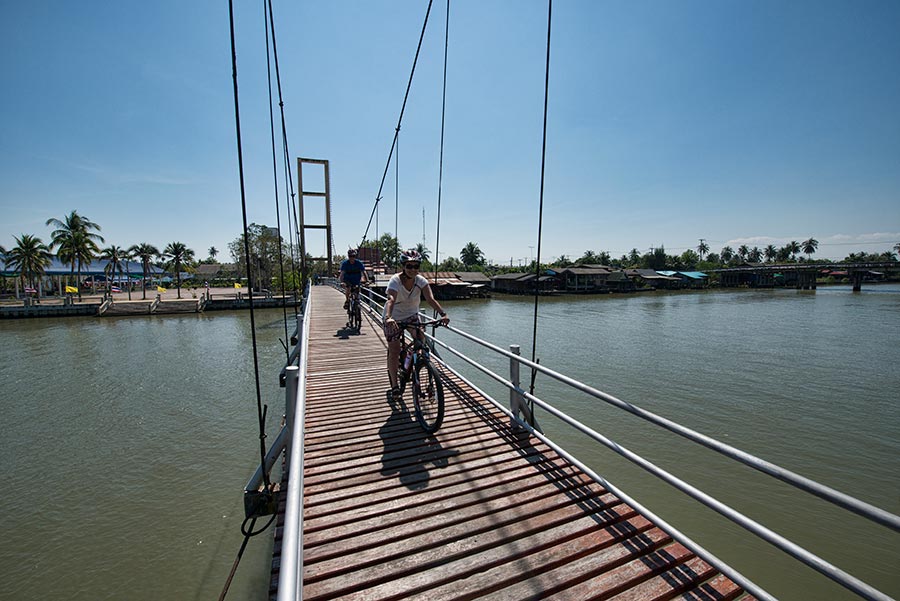 In Kanchanaburi, we rode through sugar cane plantations next to the Khwae River, stopping to check out the Burma Death Railway line and all of its history. We cycled past elephant camps, languid rivers, and past abundant agricultural areas, learning about the crops unique to the area, such as tapioca, rose apples, and papaya. Our guide made sure we sampled just about every product we saw, ensuring a further connection to the land we were cycling through. We finished off the afternoon with a visit to Muang Singh, a historical park full of 13th-century Khmer temple remains, looking right out of Angkor Wat, but without any of the tourists. Arriving with late afternoon sun on the temples and not a single tour bus in sight, it hit me that this was a way to see Thailand somewhat to the way it used to be, very local, and without most of the tourist hordes.

On our final morning together, we toured most of the ancient city of Ayutthaya and its majestic temples. While the towering ruins were obviously a big highlight for many, I found myself gravitating towards the lesser sights; stopping at a local temple school to talk with the kids, or pedaling through a Muslim community that most obviously was not used to seeing foreign tourists, giving us big smiles and kind words of encouragement as we cycled through.

It’s encouraging to see that the local bicycle market has blossomed over the past several years. There are now several Thai bicycle magazines, numerous shops selling some pretty tricked-out new technology, and during recent holiday periods, I have met groups of riders exploring the Mekong or even grunting up the mountain roads around Pai and the far north. Perhaps there is hope for this car-mad nation yet, and the endeavors of SpiceRoads that help show off some of Bangkok and Thailand’s top attractions worth preserving, all seen on two wheels, is a breath of fresh air. Now if I can only find an electric bike with wings for dealing with rush hour traffic on Sukhumvit.