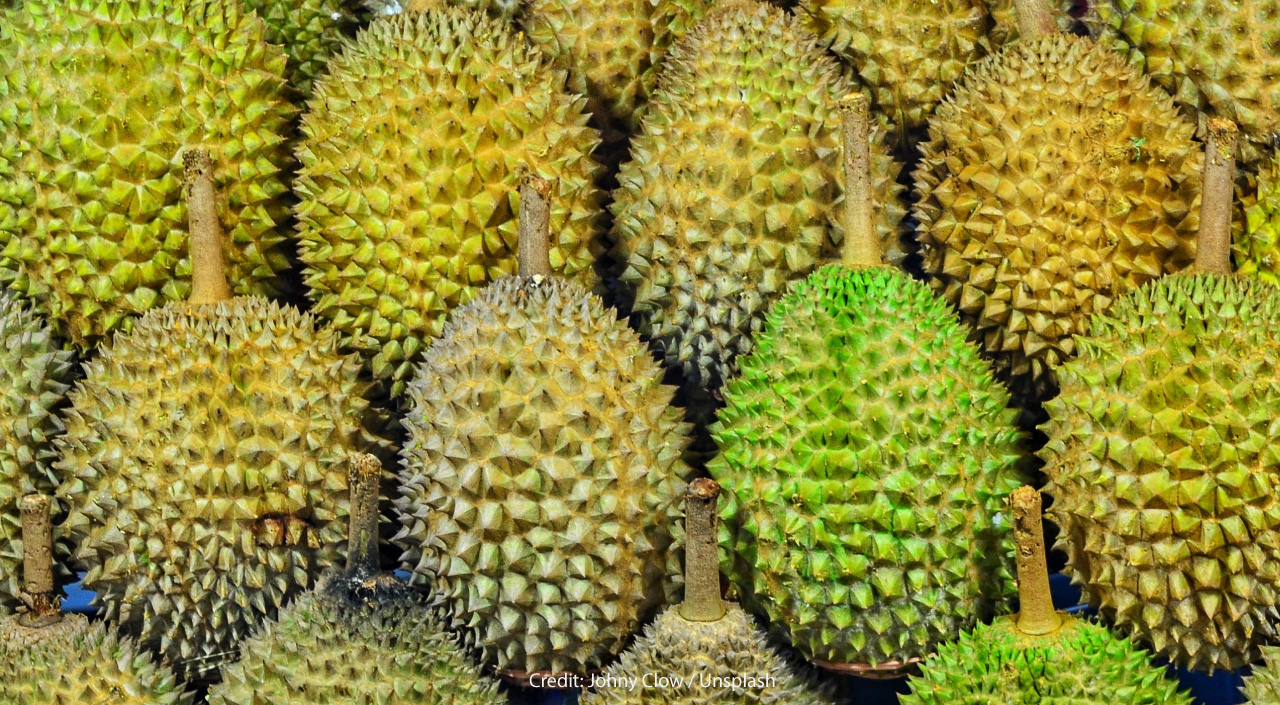 In the past month or so you may have walked pass some durians or at least been caught off guard by its strong smell. Though available all year round, the durian season starts around April as it tastes best before the rains come, or at least that’s what folk wisdom says.

Durians are not unique to Thailand and can be found in many Southeast Asian countries such as Malaysia, Indonesia and Singapore. For the un-accustomed, you may think that a fruit would be eaten much the same way everywhere, but did you know that culturally that is not so? Each country has developed its own culture for eating durians.

Before we go into details, lets recap what exactly are these durians. Durian is a tropical fruit that has an outer shell covered in spikes. Its flesh is yellow and custard-like with a distinctive odor. The smell has often times been likened to that of a rotten egg mixed with moldy cheese. It smells of sulfur and the odor is so strong that it is banned from hotels, airlines, MRT and BTS systems.

But the smell of durian also evokes emotions. For durian lovers, its smell would bring up memories of its wonderfully creamy and delicious taste. For non-lovers though, the smell is unbearable and unrelenting. My husband abhors the smell and will not eat it. I, on the other hand, treat it as a delicacy and a special treat. Thoughts of having durian spark joy in me, much like candy would for a child. 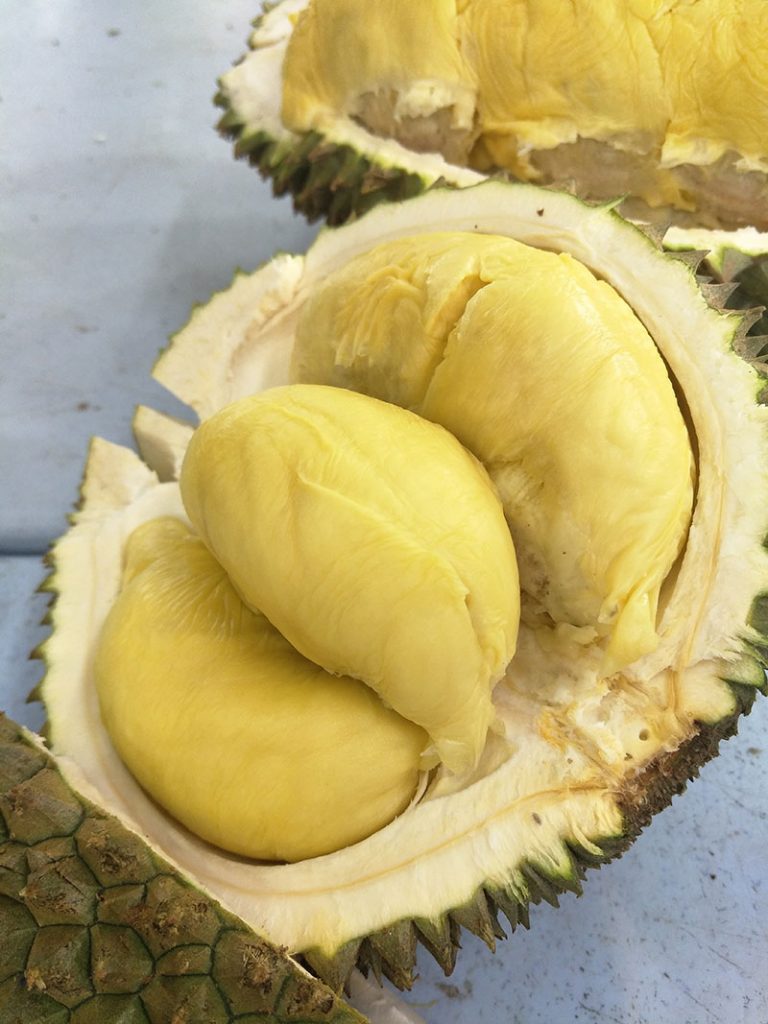 Durian is undoubtedly a unique fruit and has been appropriately named the “King of Fruits”. If you haven’t tried it before, you should try it at least once in your life. The first human to have eaten it clearly discovered gold.

How do you eat durian? Well, I grew up eating them with a fork, knife and spoon. It has a texture which somewhat resembles a runny cheese like Mont D’Or or that of a creamy custard. To prevent my hands from getting dirty, my parents had us use cutlery. When you’re a child, you grow up thinking that’s the way everyone eats it. Little did you know that you were the odd one out.

I learnt that fact one afternoon in an apartment with my university friends in Philadelphia. A group of Indonesians, Malaysians and Thais had gathered together for a durian party. We had bought a frozen durian and together we cut it open. My friends dug in and began eating it with their hands. That’s when I learned that durian is most typically eaten with hands across Southeast Asia.

How we treat the outer shell also differs. In Thailand, once you cut open the durian, the outer shell is typically thrown away and discarded. However, I learnt that in Indonesia, the outer shell and husk has its uses. If you put water in the husk and use it to wash your hands, the smell of durian dissipates.

My Indonesian friend also told me that they drink water from the husk to “cool” down. Much like yin and yang, we believe durian to be a “hot” fruit, which necessitates having something “cool” to counter it. In Thailand, this is achieved by eating the “Queen of Fruits” or mangosteens, a purple colored fruit with white fleshy pulp inside. Usually out during the same time as durians, you will often see them placed side by side in Thai supermarkets.

How we like the flesh also differs. Singaporeans and Malaysians prefer eating durian when it is very ripe and creamy. In Thailand, durian is mostly eaten when it is just beginning to ripen, but still has a soft and bouncy texture. The outer layer must have a bite to it while the inside is soft and creamy.

With social media, the craze for durians has taken off in recent years. You can now order directly from a farm via Instagram and have it delivered to your door. In Thailand, it is also typically eaten with sticky rice and coconut cream, or made into durian ice cream. The choices are endless. More recently, durian seems to have a found a new place as an appetizer: durian soup.

I wonder where human creativity will take us, but for now, I prefer durians just the way they are. 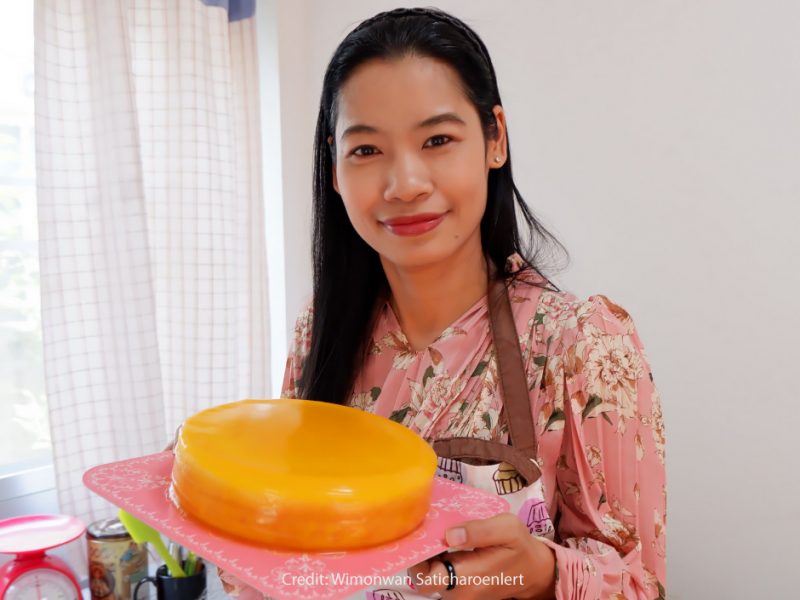 A Taste of Sweet Success