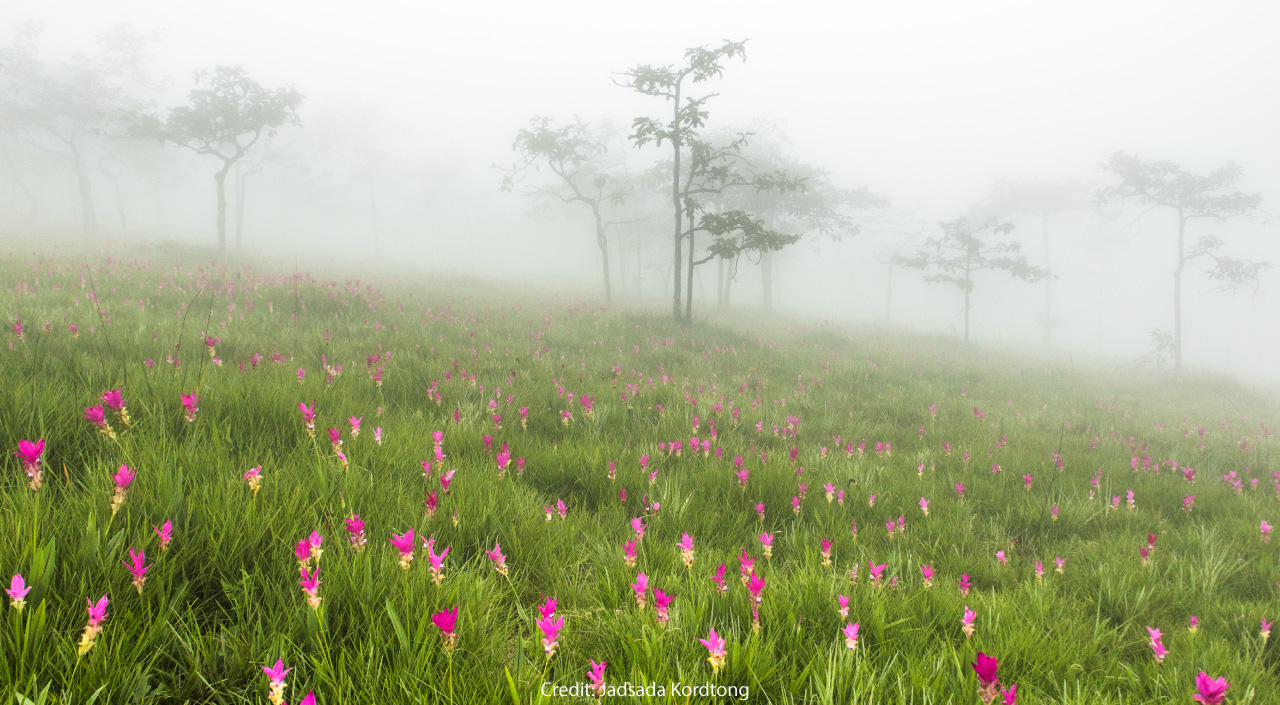 Day Tripping in the Rain

The Land of Smiles is popular for its wealth of top-notch natural attractions, soothing vistas of rivers and fields, and colorful cultural festivals. Despite its world-renowned pristine sandy beaches and turquoise seas, Thailand does have the low season when attractions at sea and on land are closed to tourism as a result of the extreme monsoon weather that sets in from July through September.

The rainy season is already in full swing since late June, but many city-dwellers still want to find some time off work traveling across the country from before September to mid-October, the period in which the country is completely drenched with heavy rainfalls.

Fortunately, there’s no shortage of places to visit even as the rains come. You can still travel during the period of light rain from June to mid-August or toward the end of the rainy season in October, depending on your destination. Below are a few recommendations that can surely help you unwind in the second half of the year. 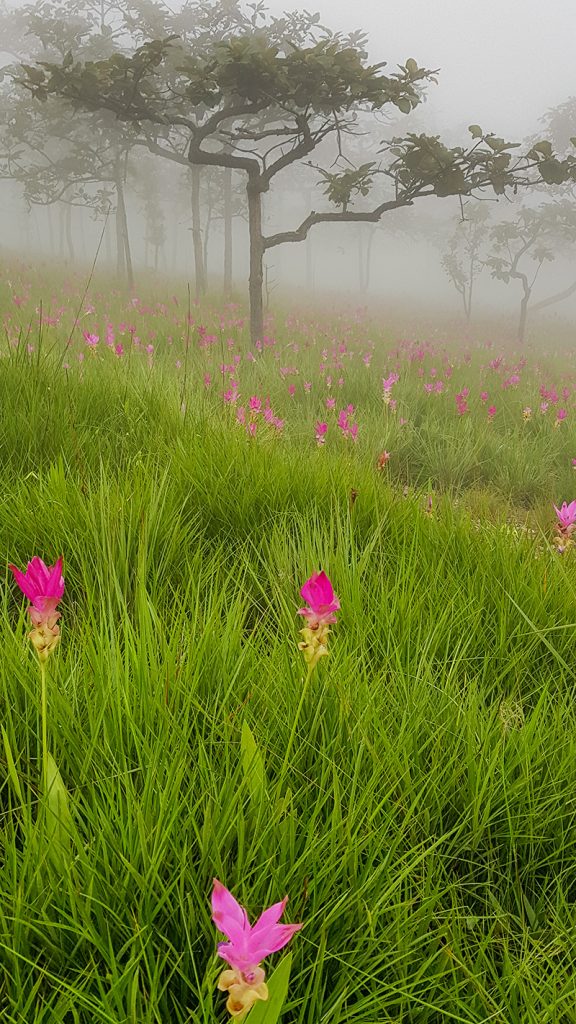 Dok Krachiao Blooming Festival, Chaiyaphum Province
Dok Krachiao, or Siam Tulips (curcuma sessilis), are coming into bloom around July and August when the official Dok Krachiao Blooming Festival 2018, organized by the Tourism Authority of Thailand, takes places in Chaiyaphum province annually. Among the most famous places to see the fields of these glorious purple flowers are the Pa Hin Ngam National Park in Chaiyaphum’s Thep Sathit district and the Sai Thong National Park in Nong Bua Ra Haew district.

These parks are a four hours’ drive from Bangkok or a five-hour bus ride from Bangkok’s Mo Chit Bus Terminal. In the vicinity of the Pa Hin Ngam National Park is the Pha Sood Phaen Din (aka Sood Phaen Din Cliff) viewpoint known for its famous sea of clouds and marking the national park’s highest point at 846 meters above sea level.

It’s the perfect spot to enjoy a sweeping view of the stunning mountain scenery. It’s worth remembering that this is the point on which three of the four regions of Thailand – North, Northeastern and the Central Plains – converge. 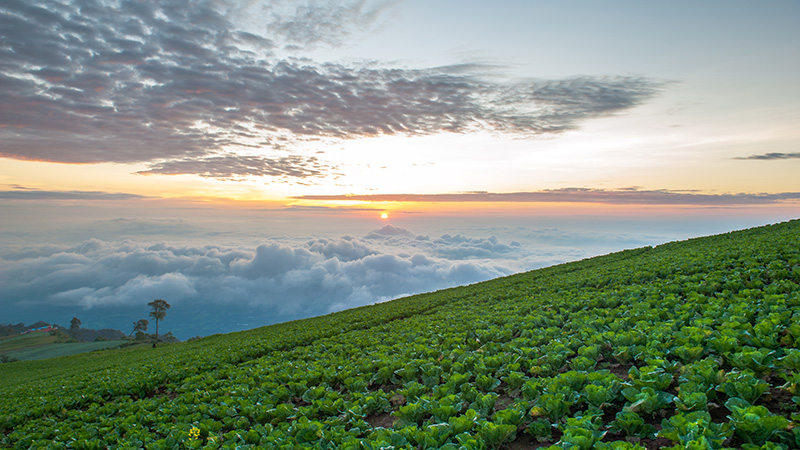 Khao Kho and Phu Tub Berk, Phetchabun Province
Phetchabun province in the upper part of the Central Plains plays host to breathtaking hills and great mountains like those in the North and Northeast regions. Most people flock to national parks and other attractions set in mountainous areas during winter. Given the dry season, it’s relatively easy and safe to drive up and down the hills. However, it’s possible to check out some of the mountain attractions in June despite light rain or October when the rains are drawing to a close and when the scenery is stunningly green and fresh.

If you’re looking for adventure, I would recommend a visit to the Khao Kho mountaintop in Phetchabun’s Khao Kho district and the Phu Tub Berk mountaintop in nearby Lom Kao district of the same province. Both destinations are roughly a five hours’ drive from Bangkok.

Both Khao Kho and Phu Tub Berk viewpoints afford magnificent views of spectacular landscapes over a sea of fog with the latter being the highest spot in the province. Driving uphill when the heavens open can be a strenuous undertaking. So it’s wise to check the weather beforehand. You can also opt for local public transport if you don’t want to drive. But after a steep climb, you’ll finally be rewarded by panoramic views that tell you it’s worth all the effort.

I recommend an overnight at a resort or guesthouse up there in order to rise early in the morning for the first glimpse of the rising sun and just to find yourself totally enchanted with the mountain scenery with a sea of mist below.

Terraced Rice Fields, Mae Hong Son Province
Terraced rice fields of Mae Hong Son’s Mae La Noi district are a wonderful sight on both sides of the road that rises and dips toward the district’s Royal Project farms under the royal patronage of the late King Bhumibol.

Mae Hong Son, 870 kilometers from Bangkok, can be accessed via different routes by air, car or bus from Bangkok. Getting there by bus requires visitors to stop off at Mae Sariang district and catch a connecting bus to Mae La Noi. It’s much easier flying to Chiang Mai where visitors have a wide choice of bus or van services to Mae La Noi.

The rainy season is the best time to visit Mae La Noi, especially around August to October when rice stalks reach full maturity in their reproductive stages. Once there, it’s easy to get carried away by the soothing views of these terraced rice fields with the rice swaying in the wind and soaking up the little droplets from the rain.

Nearby you will also find small shops selling organic fruits and vegetables from the Mae La Noi Royal Project. These include avocados, plums and passion fruits. It’s possible to visit the district in the winter, too. But you have to contend with the fact that these green paddy fields are nowhere in existence as the rice crops fast ripen just before harvest time.

Places to Avoid
However, there’s a few places that you might want to avoid when the rains come. Park officials at waterfalls and caves are on high alert in case of flash floods, landslides and mudslides. The threat of these disasters prompts national parks to be closed to tourism temporarily during July or September with increasing chances of heavy rain. With plenty of water during the rainy season, waterfalls at some national parks, however, are open all year around and safe to have a good soak in.

But if you are an adrenaline junkie who loves extreme sports such as whitewater rafting, this is probably the best time to venture out. However, be extra careful and check with national parks or forest authorities first before hitting the road. Otherwise, you might want to wait a bit longer until October or November when the rainy season ends.

It’s best to avoid islands of national marine parks during the rainy season. Many famous islands such as those within the Similan National Park in Phang-nga province are usually closed during the rainy season. Hitting the beach may seem a good idea, but it’s mostly cloudy with patchy rain. So wherever you are, just hang in there and wait a bit. It’s better go there during the end of the rainy season to ensure the best holiday in a tropical paradise that is Thailand.