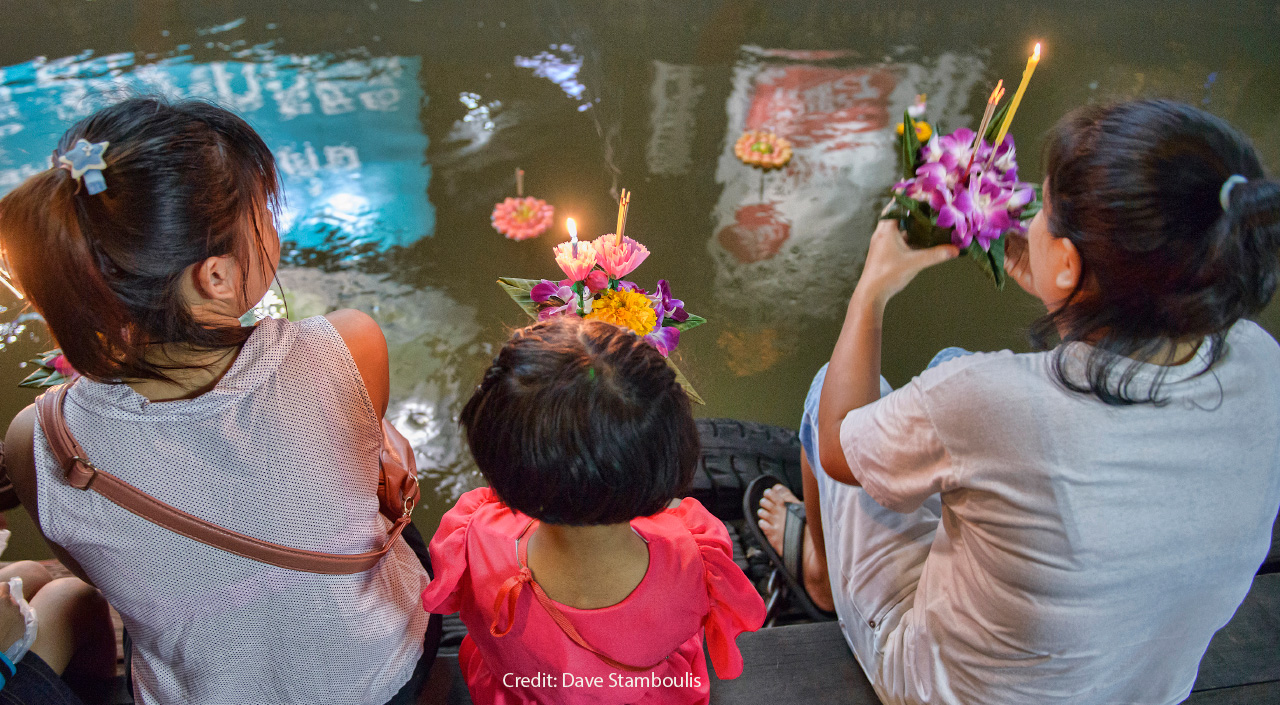 November normally brings cooler temperatures to Bangkok and is the beginning of the best time of year to get outside. It’s no coincidence that there are some big celebrations taking place at this time, both in Bangkok and outside of town.

Loy Krathong is the biggest festival, joined by its northern counterpart Yi Peng, and up in Isaan, the town of Surin hosts the annual Elephant Roundup, one of Thailand’s most enjoyable weekend fetes. Here’s a synopsis of what is coming up. 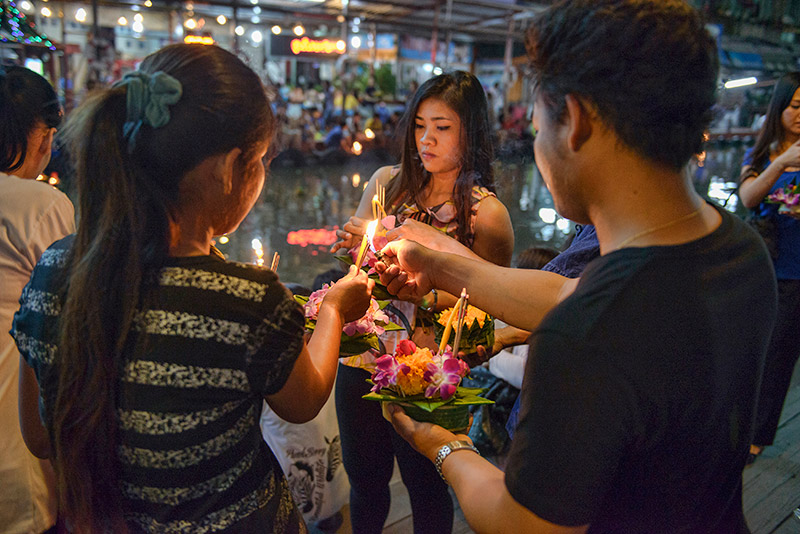 Loy Krathong
Perhaps Thailand’s most traditional and magical celebration, Loy Krathong is a Brahmin festival in origin, which honors both the Buddha and also the goddess of water Phra Mae Kongka (November is traditionally the time when, post-rainy season, canals and rivers overflow their banks, and is the end of the harvest period).

On the night of the full moon, thousands of people everywhere in the country take to every river, lake, canal, and pond  to float krathongs – small baskets traditionally made from banana stalks, but now made from bread or lotus leaves, which are formed into rafts, decorated with candles and flowers, and launched into the water, symbolizing letting go of anger, bad deeds and thoughts, and to express gratitude to the Hindu water goddess Phra Mae Kongka.

In Bangkok, the Chao Phraya river is the epicenter for the merit making, and as the candlelit krathongs floating down the river are pretty romantic, most of the hotels and restaurants here offer prime viewing spots and special dinner promotions, making this festival just as amorous as Valentine’s Day! Loy Krathong will be celebrated on Nov 23 this year. 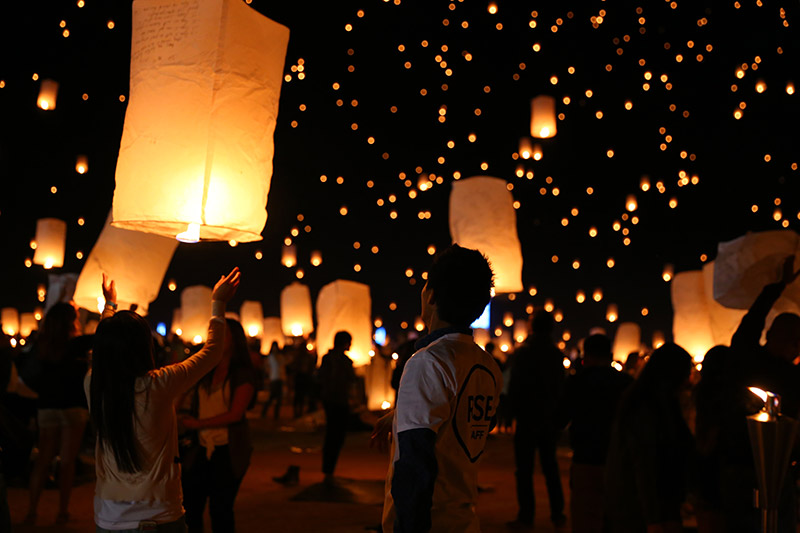 Yi Peng
In a unique northern version of Loy Krathong, Chiang Mai plays host to Yi Peng, also celebrated on Nov 23. While a different festival, it is celebrated on the same date (which is the Lanna lunar calendar’s second month, yi means two and peng means full moon), and rather than floating boats, candle lanterns (made from rice paper and wires or bamboo, to which a lit candle is affixed inside) known as khom loi are set sail into the night sky.

Known as the “festival of lights,” Yi Peng is wildly photogenic, romantic, and is northern Thailand’s most notable event. It takes a bit of planning if you want to join in the festivities, as Chiang Mai gets very crowded during this time, and you need to note that despite this being a traditional Lanna festival, there are two festivals that occur these days, one put on for tourists which is a paid event, with guaranteed seating, transportation, and dinner, and the traditional free Thai event which is very crowded and chaotic, so do plan accordingly. 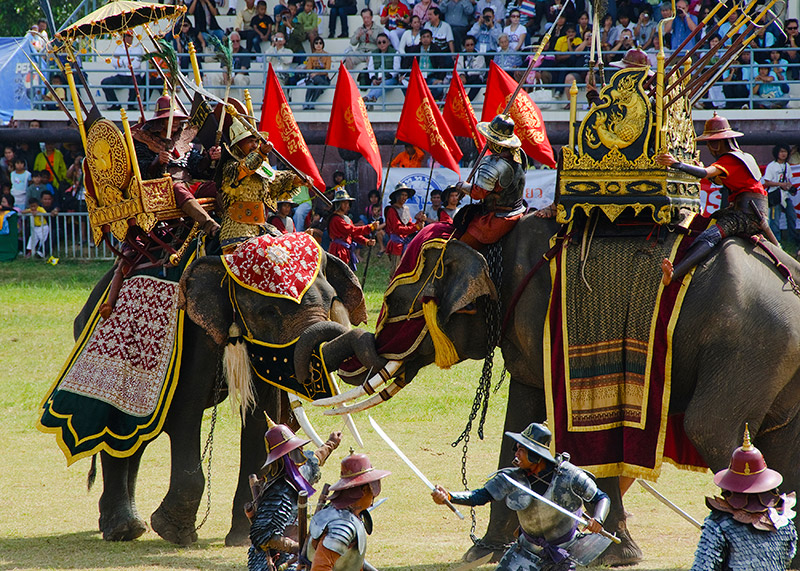 Surin Elephant Roundup
Every year during the third weekend of November, Isaan’s Surin celebrates the historical connection between elephants and their mahouts (trainers) and the role that elephants have played in Thai daily life and history. Get here prior to the weekend though, as on Friday morning the town welcomes the star attractions by serving up a huge elephant breakfast, where the elephants line the main street and sate themselves for the big weekend ahead. The festival will be held on Nov 17 – 18 this year.

The festivities then move over to the large Si Narong Stadium, where there are demonstrations of the techniques used to train elephants, and the big beasts show off their prowess engaging in elephant polo matches, playing football, and large us-versus-them tug-of-war events in which the audience are invited to come out and pull on the rope (of course the elephants always win). Following the fun and games, mahouts show off feeding and bathing rituals, as well as traditional ceremonies like phi pakarn, a rite used to fend off danger during roundups of wild elephants.

As elephants have traditionally been a vital part of ancient warfare in Siam, the main event of the festival is a fully recreated mock battle with large armies being led by their colorfully adorned costumed elephants, complete with cannons and plenty of smoke and fire. In addition to these activities, there is also a local beauty pageant, a parade, and plenty of rides and photo sessions available with the hundreds of elephants that come in from around the province for the event. For a glimpse into the importance of elephants in Thai culture and history, this one’s a must-see.