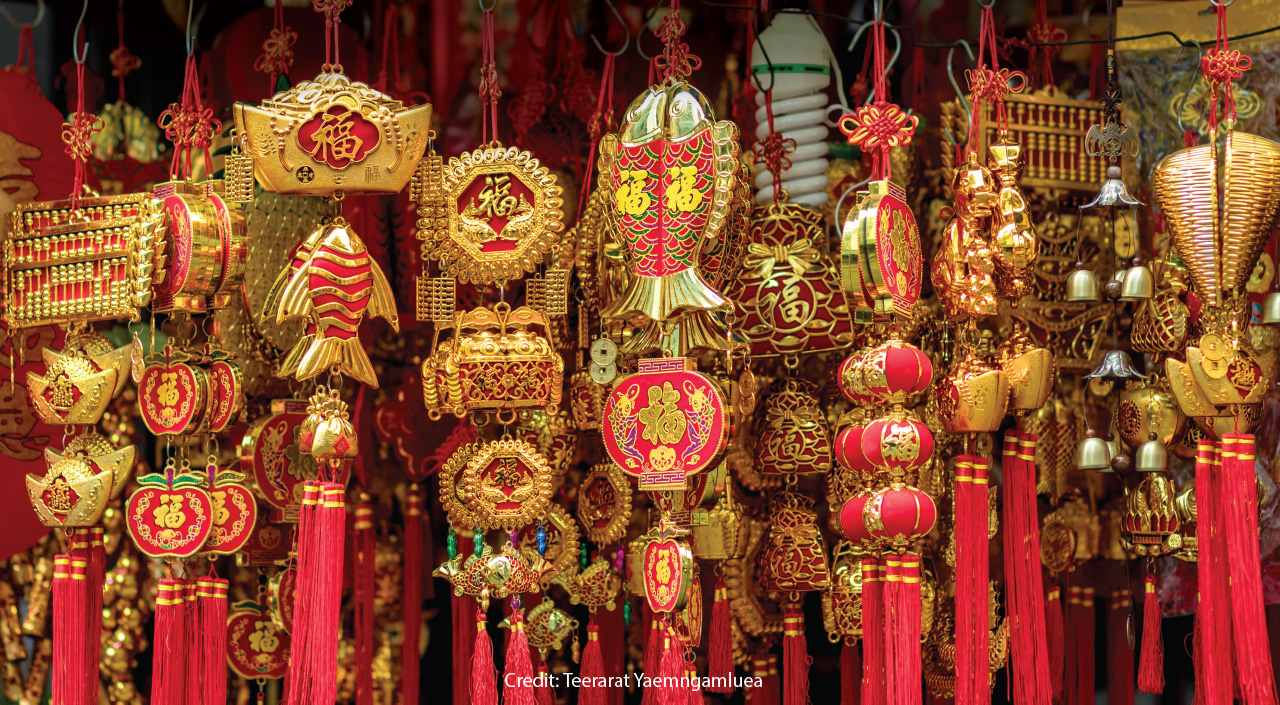 This coming February 16 is Lunar New Year, aka Chinese New Year. Being of Thai-Chinese descent, I’ve been observing my parents’ activities during the Chinese New Year for decades. When this festival approaches, it means a whole day’s shopping spree in Chinatown for my family and myself. I always wonder why they shop there, and especially, how the early Chinese immigrants first settled in Thailand. 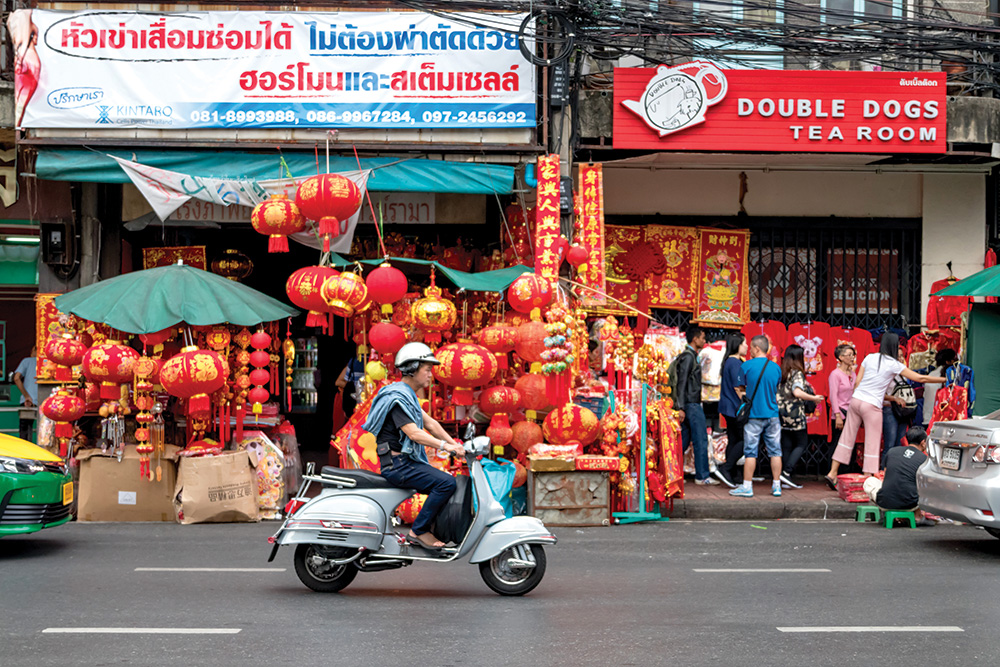 One of the earliest official records of Chinese passing through Siam would be about the travels of Zhèng Hé during the 14th century. He was a Ming Dynasty admiral, diplomat and explorer who traveled the seas, especially to Southeast Asia and into the Indian Ocean. At one point, he sailed to Siam’s capital Ayutthaya (then called Ayodhya) and after his disembarkation started trade between the two countries, triggering a flow of Chinese immigrants to Siam and their emerging communities in cities on the banks of the Chao Phraya river.

The Chinese immigrants lived in widely scattered communities in Ayutthaya and other cities. Over time several thousands migrated south in search of better opportunities and settled in several areas in and around Bangkok during the Rattanakosin era. When King Buddha Yodfa Chulaloke (Rama I) founded Bangkok in 1782, plans were afoot to build new government houses and the Grand Palace in the capital’s Tha Tien neighborhood, home to a Teochew community of Han Chinese from southeastern China since the Thonburi era. Therefore, the Chinese were asked to relocate to what’s now known as Sampeng, or Bangkok’s Chinatown. 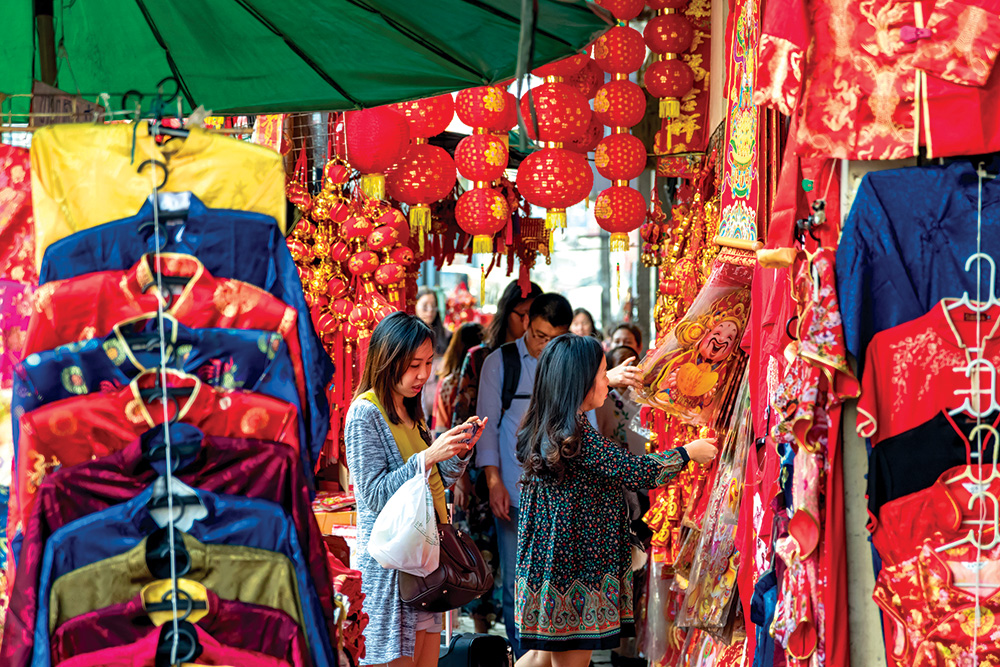 Located southeast of the city walls, Sampeng covers an area from a canal next to Wat Chakrawat to another canal near Wat Pathumkongka. In the early Rattanakosin period, Sampeng was one of Bangkok’s main trading areas with thousands of Chinese laborers loading and unloading goods from Chinese junks docked at Ratchawong Pier. 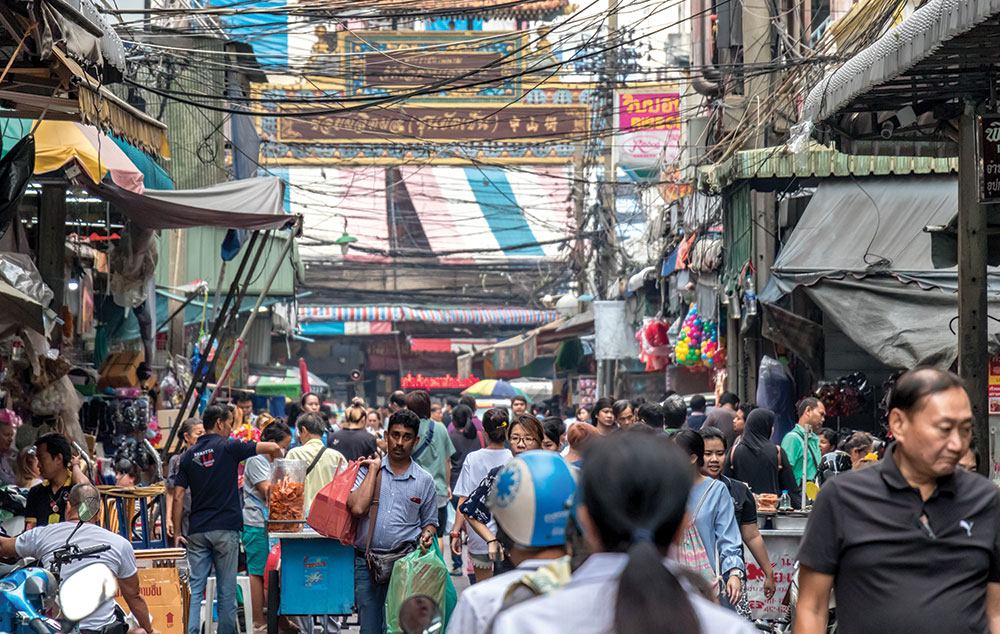 Besides their cheap labor, the Chinese were known as trustworthy middlemen. Chinese merchants demonstrated considerable business acumen and were keen on sourcing goods from around the world to sell to people of all classes. Sampeng soon became a vibrant marketplace of imported goods: agricultural products, herbal medicine, canned food, silk, jewelry and timber. It’s believed that many of these seagoing junks might have been built in Siam; however, Sampeng’s alleged shipyard site has yet to be located by scholars. 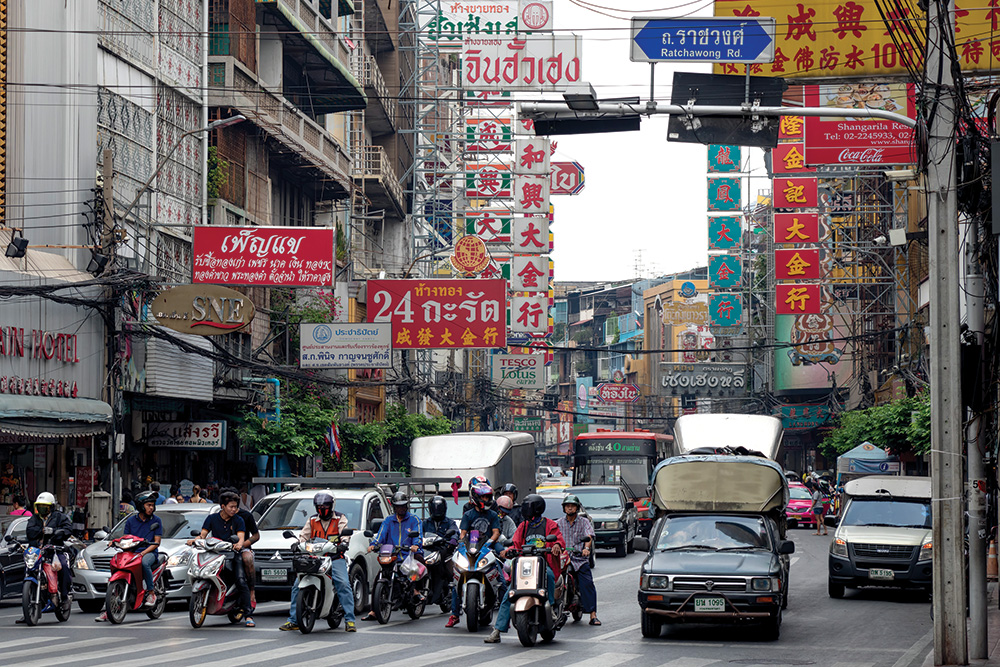 Over time, trade flourished and so did Sampeng’s Chinese population. Soon enough, the area grew in a somewhat haphazard fashion. The small roads and alleys became heavily congested and living conditions deteriorated with no appropriate sanitation. There was no urban planning back in the days, so these cobbled and paved alleys – roughly laid with only wooden boards – led to just about anywhere one could imagine: houses, schools, public toilets, orchards, and even livestock pens. With the roads becoming increasingly inaccessible by cars and trucks, the main mode of transportation was by boat.

Since people used Chinese lanterns at night, house fires in Sampeng happened frequently. The biggest fire of Sampeng roke out in 1850 at Wat Chakrawat and swept through Talad Noi market and Wat Pathumkongka, resulting in a great number of fatalities and substantial property damage. The sheer extent of the damage had to do with the fact that the narrow alleys limited the entry of fire engines and hampered the fire-fighting effort.

Anxious to improve the welfare of his subjects, King Chulalongkorn (Rama V) finally decided to build five new roads in the capital for greater mobility in parts of the city including Sampeng. The new roads – Yaowarat, Ratchawong, Anuwong, Chakrawat, and Worachak – cut through different Chinese communities and took a decade to build. Upon completion of the mega construction project, these enclaves were automatically grouped together, with each named after the road on which it was located. Since then all of them have been known accordingly. 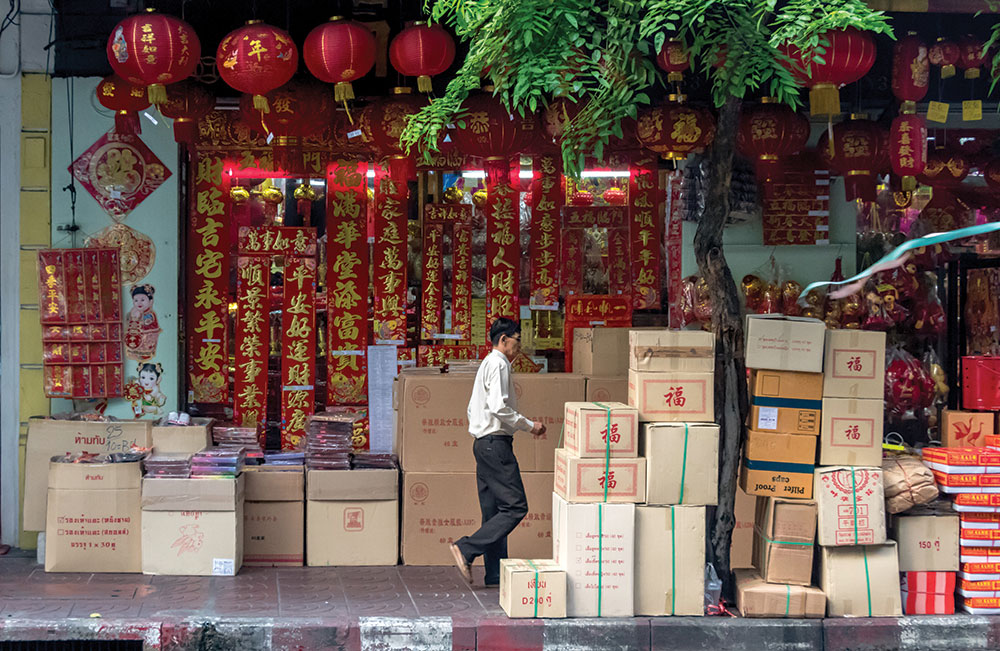 The history of Chinese immigrants in Thailand isn’t without unhappy chapters. With Bangkok’s city street more congested, people living in overcrowded conditions and resources becoming scarcer, the crime rate went up and people started to gang together. In response, the Chinese formed their own groups and association in order to seek protection and security. With the rise of communism in China following World War II, the welcome given by the Thais to the Chinese had grown chilly. The Chinese was deeply regarded with suspicion among Thais.

After decades of relative calm, communal tension and violence flared in Sampeng, often leading to sporadic riots. To defuse the racial tension, King Ananda Mahidol (Rama VIII) decided to personally intervene by visiting Sampeng on June 3, 1946. When news about the King’s tour of Chinatown reached the Sampeng community, its dwellers started making preparations to receive the King.

When King Ananda arrived with his brother, HRH Prince Bhumibol (later Rama IX), Chinese people of all ages lined the streets to show their respects and loyalty to the young monarch. Seeing that they share the same love and loyalty to the monarchy, all disputes between the Thais and Chinese soon disappeared. 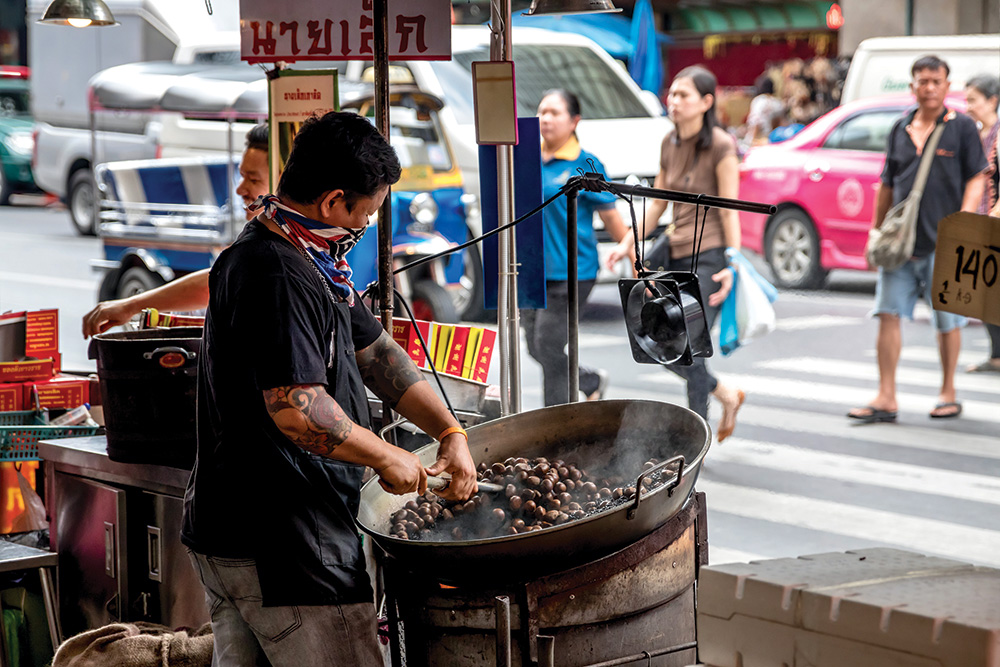 Today when we mention “Chinatown”, it means the old market and the area along Yaowarat Road where people can still find retail stores, gold vendors, roasted chestnut stands, restaurants, and the famous Thai and Chinese street foods in abundance. Come and visit Sampeng to see how two different, yet beautiful cultures can blend perfectly into one.