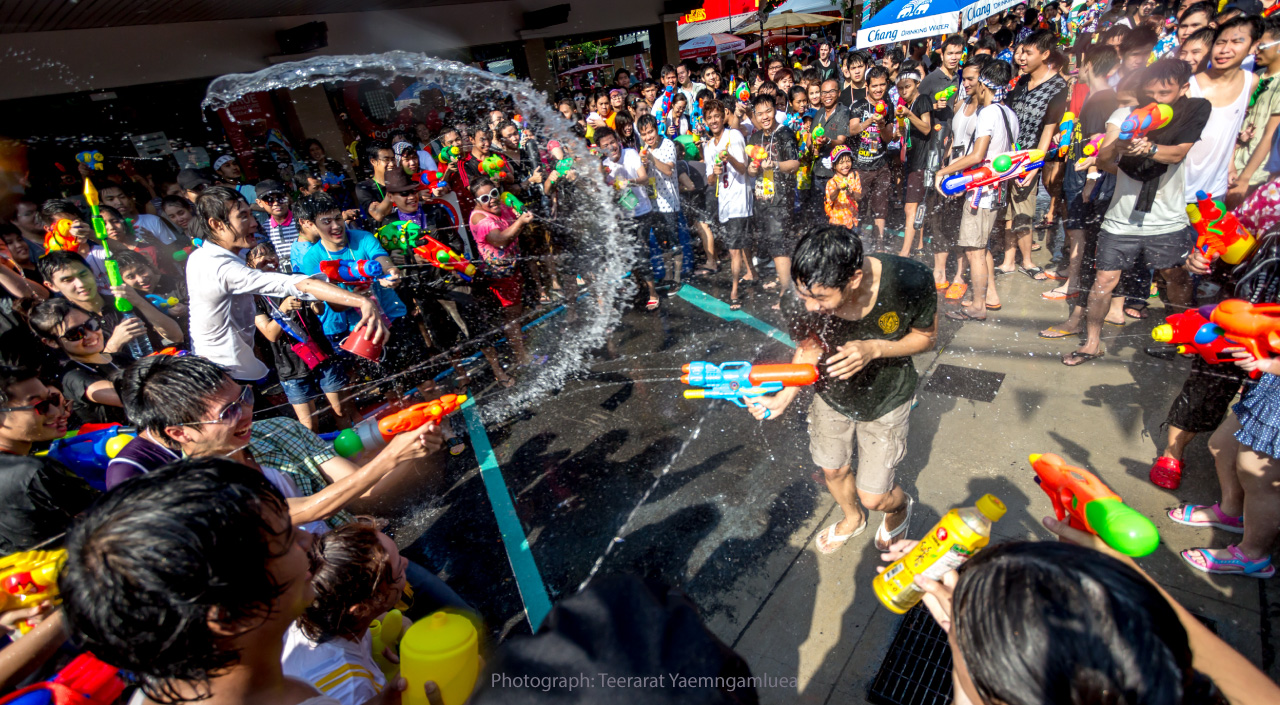 A New Year, A New Beginning

When it comes to New Year’s Day in Thailand, most Thais will ask, “Which one?” There are three remarkable occasions for the so-called New Year’s celebrations in Thailand: international New Year’s Day on January 1, Chinese New Year’s around February, and Thai New Year’s, or Songkran, usually spanning April 13 to 15. 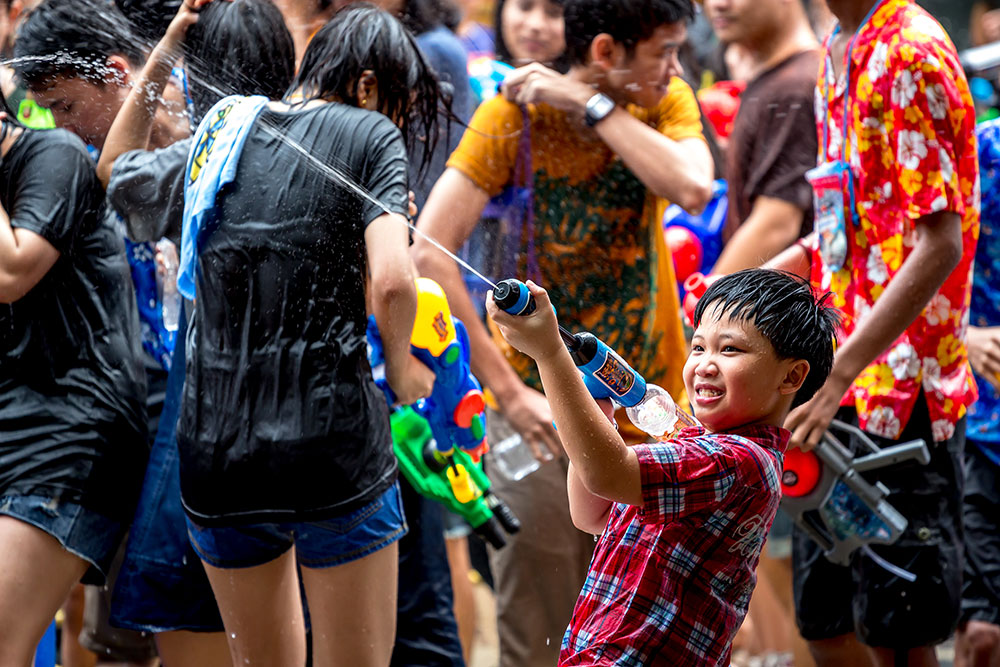 Shoot to thrill: A boy takes aim at another reveler | Photograph: Teerarat Yaemngamluea

Songkran is marked by “water-splashing”, or a nationwide water fight over three days. The heat in the afternoon gives people an instant excuse to go on a splashing spree to cool down during long, hot summer days. Thais and foreign tourists consider Songkran to be a rare opportunity to gang up on fellow water warriors, armed with high-pressure water pistols and buckets of iced cold water.

But since when have people taken to splashing water on one another and called this practice the norm during Songkran? I have to admit that I haven’t got a clue. What I was told in my younger days was that Songkran was celebrated quite differently from what it is today.

Back in the days, Songkran would start on April 12, generally observed as a big cleaning day reserved specifically for housework. Thais spent the day cleaning their houses by scrubbing the floor, washing curtains, mosquito nets, bed sheets, and clothes thoroughly. They would get out Buddha images from the altar to dust them off for a bathing rite before placing them back with fresh flowers and other offerings. The elderly would spruce themselves up by cutting and washing their hair, and the ladies would go out to do some grocery shopping as they were in charge of preparing food for the next day.

On the early morning of April 13 or “Maha Songkran Day” (Big Songkran Day), people would be busy in the kitchen  preparing food before sunrise. The freshly made traditional delicacies would be offered to monks on their morning alms rounds. Then they would get washed up and put on new clothes. The elders of the family would be particularly in high spirits on the day as they anticipated a series of visits by their children, grandchildren, and relatives. Thais would pay respect to their elders by offering a bowl of scented water along with flowers and presents, and ask them for blessings of good health, good fortune, and prosperity. In return, the elders would hand them their presents, such as home-made candies, embroidered cloth, or some money to be kept in reserve or for good luck. 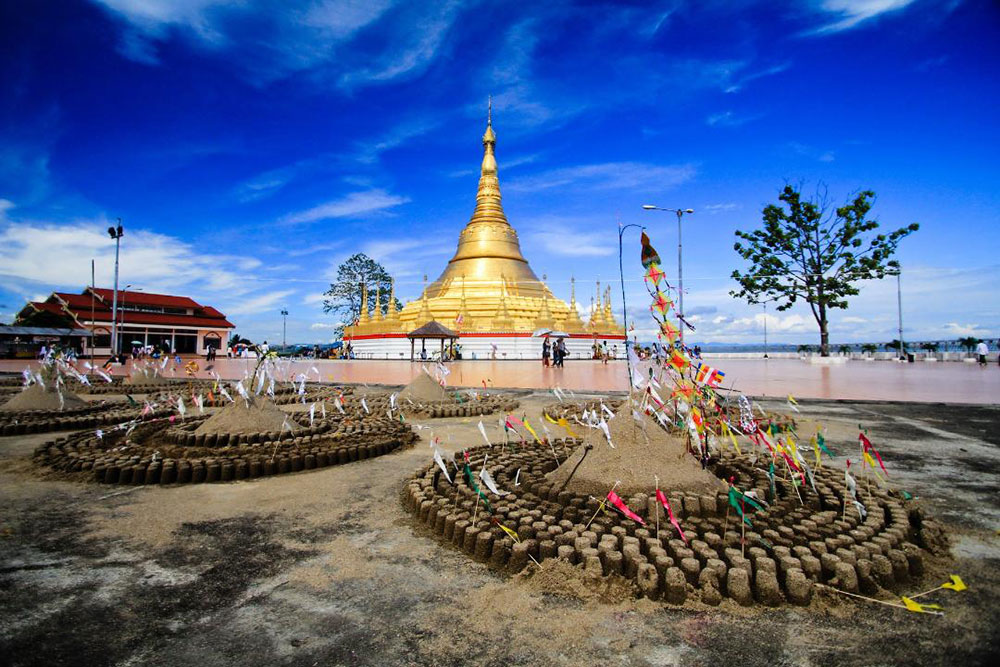 The sand chedi building tradition can be found at temples throughout Thailand | Photograph: Nuttawat Wiratchakoun

In the afternoon, people would visit a temple for merit-making rites. Traditional temple activities included the “kor kong sai” or “kor phra chedi sai” (sand chedi building). This activity saw the coming together of local people as they took part in the extraction of sand on the banks of a nearby canal or river. The sand was then brought to the local temple where it was used to build small replicas of famous pagodas. According to local customs, at the end of the pagoda-building activity, it was considered auspicious to return home with sand from the temple grounds still stuck to their shoes.

So at the start of every New Year, it was customary for people to bring sand to temples. Some temples encouraged this custom by organizing a sand pagoda building competition to find the prettiest pagoda design. It is believed that this tradition, still in practice these days, is rooted in the need to improve the flow of water in canals and rivers in preparation for the rainy season after the long summer. Then, Buddhist monks thought up an ingenious scheme to get villagers together to dredge irrigation canals and rivers that had been silted up with sand.

Every temple would organize an outdoor Buddha image-bathing ceremony in which worshippers poured or sprinkled scented water onto the image and made a wish for a prosperous year ahead. At the temple, the abbot would give a long sermon and blessings, people would release fish or birds into their natural habits before enjoying traditional temple amusements such as a funfair and an outdoor market, hence the name “ngan wat” (temple fair) for the rest of the day.

The next day (April 14) was observed as Ancestor’s Day. Similar to Chinese Ancestor’s Day (Ching Ming Festival), Thais would join merit-making events to give blessings to their ancestors. In 1989, the government designated April 14 as Family Day, so the day in its humble beginnings usually involved family gatherings over a meal. Then they would rest and get ready for the new year ahead. 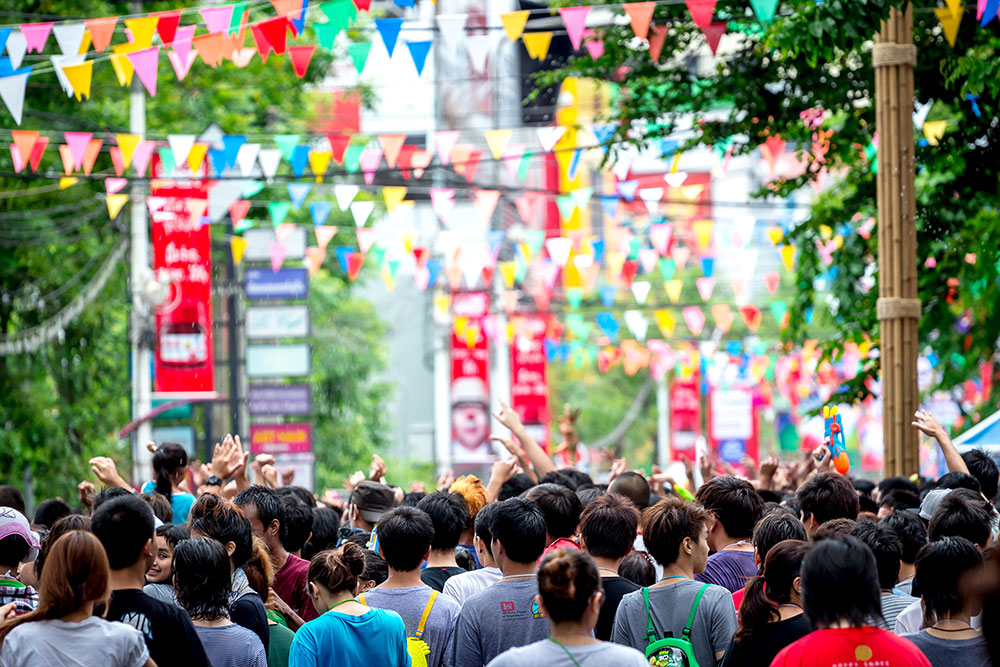 These traditional Songkran festivities from the recent past are still kept alive mostly in the Thai countryside and the suburbs of Bangkok. It is important to preserve these cultural traditions that are based on respect for social and family values that are increasingly taken for granted these days. So before you grab a water pistol, make sure you spend some time with your family, visit the nearest temple to experience traditional Songkran festivities and keep this beautiful culture alive for the next generation.